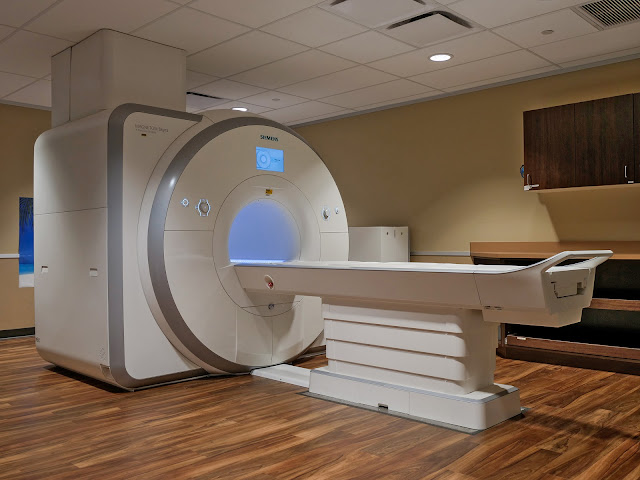 I'm a fan of using cameras correctly. In many instances a really cheap camera, use right, can create files that look much, much better than a very expensive, state-of-the-art camera. If you take a decent camera, get the white balance zero'd in correctly, figure out exactly where you want to place the depth of field and then put the whole shebang on a sturdy tripod you'd be hard pressed to tell the difference between a Phase One medium format camera and, well, a micro-four thirds camera.

This is, ostensibly, a simple shot. Just hang out about three feet outside the door of the room (the powerful magnetic field created by the newest generation of MRI machines can turn innocent cameras and tripods into deadly, high speed projectiles.... think: rail gun. Also, subject to the inverse square law....) and shoot to your heart's content.

Except... the machine and the room are only illuminated by relatively few compact fluorescent bulbs stuck in ceiling cans and distributed around the room just where you don't want them... The room had deep, dark shadows and areas of burnt out highlights. This became apparent when I shot my first test frame.

Without being able to light the room we needed to work with what we had and what the camera could supply us for leverage.

I switched from my usual RAW file camera setting to the finest Jpeg setting so I could take advantage of the Panasonic GH5's built-in HDR setting. Then I took a series of exposures at different starting settings so I could evaluate the sweet spot (or sweet frame) where the highest resisted burn-out but the shadow were opened up enough so that, with a little more boost in PhotoShop, I'd be able to create files that we liked.

I used the camera on a smaller Gitzo tripod about two and a half feet off the floor. I originally composed the shot a bit wider than shown here so I could crop and correct perspective. I used the Panasonic/Leica 8-18mm lens because I depended on its ability to help me fine tune final composition. The built-in level helped me keep the shot from being too wacky.

For safety's sake I also shot a bracket of RAW shots with the idea that I could blend them in post production if my in camera HDR didn't make the grade.

At f5.6 and an ISO of 200 all of the parts of the machine that I think should be sharply focused are. The lower ISO goes a long way to equalizing the quality between a shot in this format and an equivalent shot done with a full frame camera in that the full frame system would require me to stop down two more stop in order to get the same depth of field. Probably not critical in this show as we could have dragged the shutter on the full frame camera to make the exposures equal. But nice to be able to use a lens in its optimum aperture range and still get the deep focus required without worrying about the effects of diffraction.

This was the first of many shots we did that day. Some with people and some without.

This shot prompted me to go back and look at a shot we'd done back in 1988 for Central Texas Medical Center. They had just gotten a CT Scanner (no magnetic/kinetic danger...) and part of a brochure assignment was to take a sexy photo of that machine. It was the age of color filters and 4x5 sheet film. 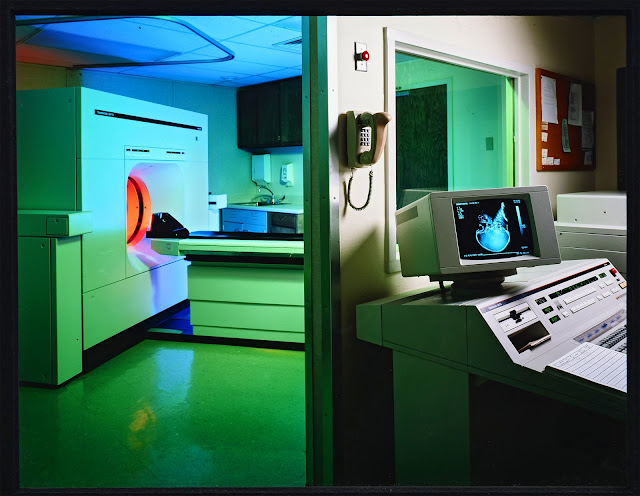 I was working with art director, Belinda Yarritu, on a brochure project for a new hospital in central Texas. It was located in San Marcos, Texas. During the course of the day we shot a beautiful mom and baby in a maternity room setting, nurses with geriatric patients, earnest looking doctors, spiffy looking lobbies and much more. But the most technical shot we did that day was in the CT Scanner area you see above.

We shot everything that day on 4x5 transparency sheet film because, well, that's just the way advertising shots that might end up as double truck spreads were done back then. We were also hauling around 2 Norman 2,000 watt second power packs and a box full of flash heads.

The shot above was done on a Linhof 4x5 using a 90mm lens stopped down to about f32. I wanted to get as much in focus as I could. We used four flash heads running off two 30 pound power packs and, as you can see, we used a mess of filters.

We were shooting ISO 64 sheet film and my meter reading told me we'd need to turn out the room lights and modeling lights and hit the power packs for four separate exposures to get enough light onto the film; we were battling reciprocity failure at the f-stop I wanted to use. We also had to put black velvet over the computer screen for the flash shots and then do a separate exposure for the actual screen information (screen on the right, just to the right of the phone...). So, four pops for the room and about 10 seconds for the screen. Sadly, Polaroid had much quicker reciprocity failure and wasn't as useful as an exposure tool for lighting situations like this.

The shot at the top of the blog took about three minutes. Lighting and testing a shooting the shot on film, just above, was probably 45 minutes to an hour of time. A lot has changed.

It's fun to see the difference over 30 years... It was a different and less sophisticated market back then.

Posted by Kirk, Photographer/Writer at 14:40 9 comments: