Cruising around with what was, until recently, the world's best camera for image quality .... Also, the right way to take the day off. 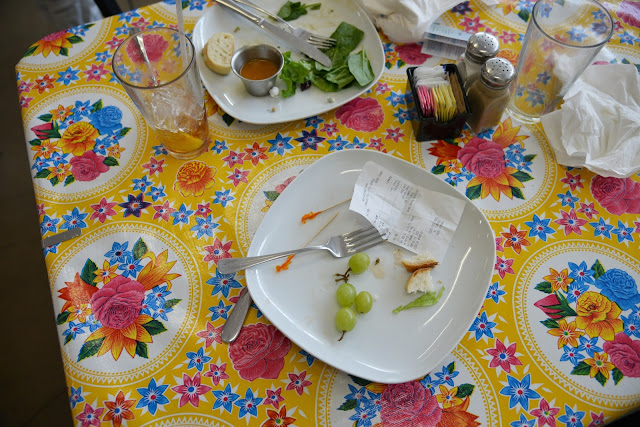 The remnants of a good lunch at the Red Bud Cafe in Blanco, Texas.

I remember just a few months after the Nikon D800/800e was introduced to the market reading the review and scores from DXO. They gave the camera an overall score of 96 for image quality; a score that was only bested at the time, if I remember correctly, by a $40,000 medium format Phase One camera (which was subsequently removed and replaced by the Pentax 645Z at 101). After reading all the current gushing over new models and new sensors across the web I went back to DXO last night thinking I would see dozens of newer cameras easily bettering the scores of the 2012 model Nikon. After all, it's been six years since that camera was debuted.

Interestingly enough there were very few cameras, across all brands, which even came close to equaling the potential image quality of the D800e (or the D800 which sits one point behind its  sibling). The new Nikon D850 is sitting at 100 points along with the Sony A7Riii, the Nikon D810 is a hair behind those two at at 97 points and the Sony A7Rii is two points ahead of the D800e at 98 points. The latest Pentax ties the six year old Nikon and the latest Sony A7iii is also tied with the D800e. So, Sony might have all the magic and has an eight year advantage over the D800e and.....the score is a tie. Nice.

These cameras are all so good as to be interchangeable when it comes to image quality. The difference between scores of 96, 98 and 100 are small, almost insignificant, and yet to hear the review sites and $$$-bloggers talk about it the current/new cameras are somehow just so much more spectacular.

It's all nonsense. Slow news days. The market obviously hit a wall at the high end of the camera spectrum back in 2012 and everything since then has been a series of tiny and mostly insignificant "improvements." Nice to know that picking up low mileage used 36 megapixel cameras for around $1,000 each can put one in the same image quality league as new models in the $3200+ category. If you didn't much care about resolution you might also be shocked at just how good the Nikon D700 is when compared to the current $2,000 micro four thirds models. Especially when taking into consideration that the D700 is well over a decade older and currently sells used for around $500. It's enough to make you convert over to buying nothing but used cameras for a while ---- which is exactly what we've been doing around here.

OMG! Health Issues!!! I woke up on Sunday with the beginnings of an ear infection. An annoying discomfort that kept me from swim practice. I woke up the next morning and it was worse. I called my physician and he saw me within the hour. I've been using antibiotic drops since then and will be administering them to myself for a full seven days. I've been out of the pool since our Saturday morning practice and the withdrawal of endorphins has been......annoying. So annoying that I've been out running the trails just to burn off excess energy. I've given up on naps because....why bother? I'm heading over to the drugstore to find some wax earplugs. No one should have to go a full week without swim practice.

Why I took today off and when road-tripping to Blanco, Texas with Belinda. So, I did four proposals yesterday and we have two approved and two more heading to clients for final approval. It's going to be a busy August and September. I felt like we've been working and taking care of family stuff non-stop lately and, after the successful ( and labor intensive) sale of my parent's house, I just wanted to step off the hamster wheel for a day and chill.

I've been driving back and forth to San Antonio a lot and my most frequent trips are on Sundays. When I head home the "back way" I go up Hwy. 281 through Blanco, Texas and then through Dripping Springs, Tx. On Sunday afternoons (after 3 p.m.) my favorite café in Blanco (Red Bud Café) is already closed and so is my favorite bakery/coffee stop in Dripping Springs (Thyme and Dough). I also wanted to visit one of the breweries and one of the distilleries in Blanco as they've been winning awards, generating great press and turning out really good products. But Sundays......

Today, after a long morning walk in downtown Austin I came home and asked Belinda what was on her schedule. Nothing earthshaking. So we left Ben (waiting to hear back about a couple job offers) and Studio Dog (patrolling the perimeter of the VSL compound, and begging for treats from Ben...) and we headed through the Hill Country to Blanco. I took the above mentioned camera (D800e) and the 24-120mm f4 VR along for the ride. 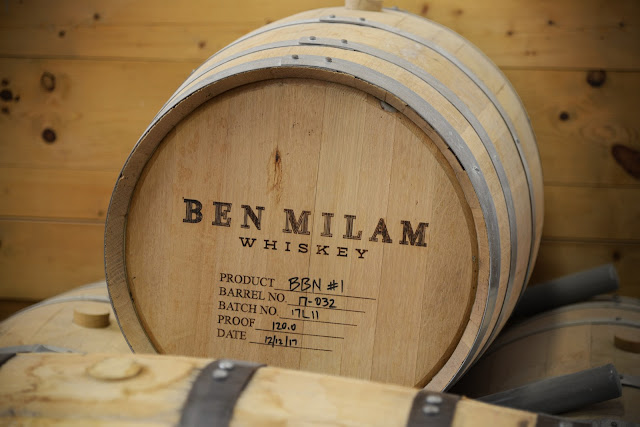 This is barrel #1 at the Ben Milam Whiskey distillery. I first sampled their
Whiskey at my local Twin Liquors Store and it was pretty amazing.
I have a swim coach who is a partner in a competing whiskey business
so I won't make any claims for ultimate drinking satisfaction.
I'll just say that all good whiskey is subjectively appreciated.
I appreciate Milam...a lot.

It was early in the day so we didn't sample. But we did get a quick tour of the facility and heard about their plans for expansion. Double Gold Medals at a international show go a long way toward spurring growth.... 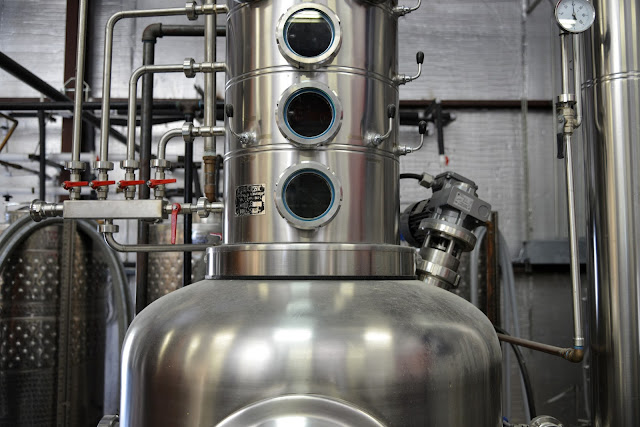 I don't know what this does but it sure looks cool and industrial chic. 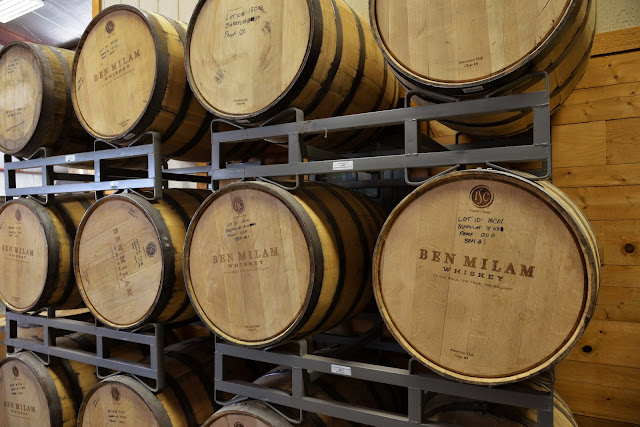 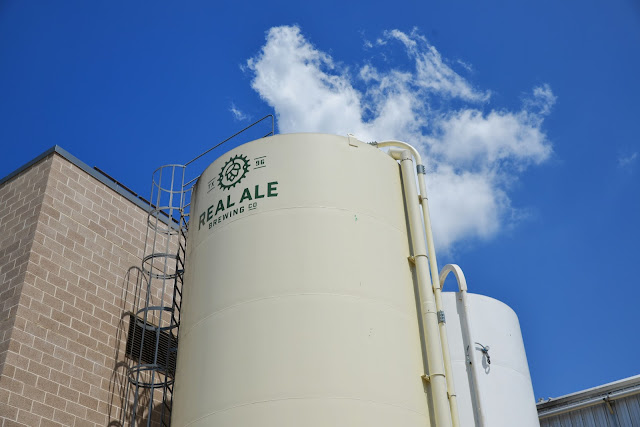 Our next stop was at the Real Ale Brewing Company just down the highway. (by the way, I'm renaming Hwy. 290 West = Liquor Lane because there are so many start-up distilleries, breweries and wineries along that road. Idea = photo tours from Austin, going from distillery to brewery to winery all day long, with lots of stops for camera work and beverage sampling...). We went through their tap room and out onto the catwalk overlooking their very modern production facility. Amazing how big the giant tanks are. There's a lot of good stuff going on around Blanco which belies its 1800+ population numbers....  Mmmmmm. Fireman's Four. MMMMMM. The Devil's Backbone (two great ales). 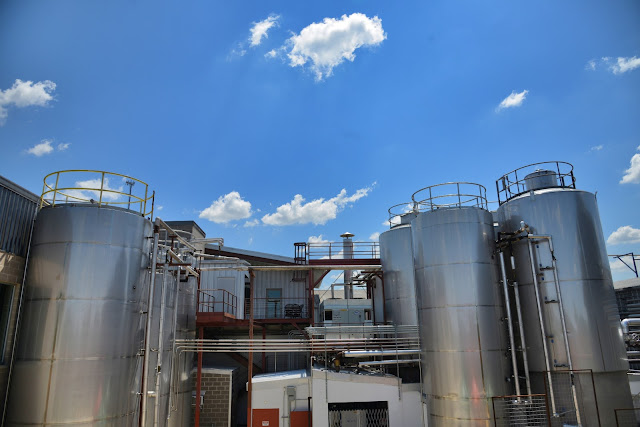 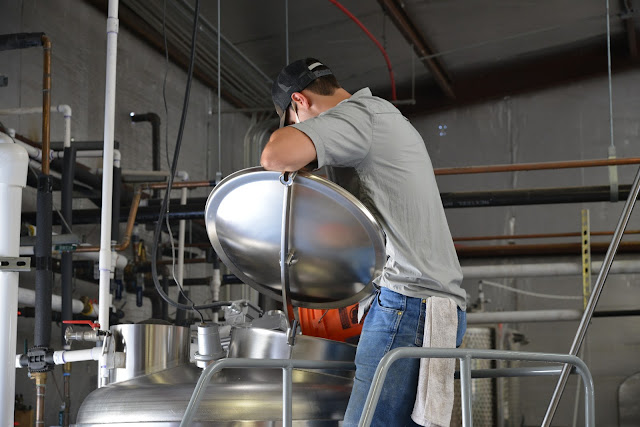 Adding something to the mash at Milam.

Belinda and I had lunch at the Red Bud Café and then headed back to Austin. I couldn't resist two more activities before we got back to our respective offices and re-joined the U.S. workforce. One was to wash my car at the car wash in Dripping Springs (I think my car really likes it...) and the other was to stop at Thyme and Dough bakery for some good coffee and their "Cadillac" cookie = oatmeal, chocolate, walnuts, and pecans. Since we did all of our driving outside the expansive rush hour times in Austin we had smooth sailing in both directions.

Nice day to just tool around Texas. Glad I brought my (current) favorite camera along for the ride. 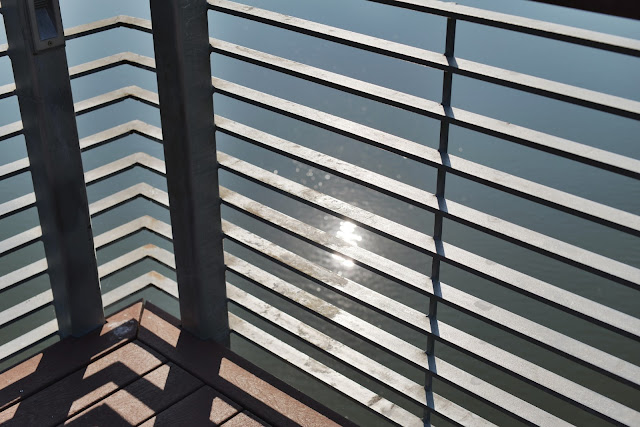 flare test with the 50mm Sigma ART, from this morning's walk.

Finally, I think I've written too much about the Nikon D700 at this point. Two of my favorite readers let me know this week that they've ordered D700s and are looking forward to checking out the magic. I can only think that this new demand will spike pricing on the dwindling stock of D700s out there in the used market, depriving me of future bargains. Ah well. I can't fault my readers for their good taste.