Flash one day, LEDs the next. It's a sunny Wednesday in Raleigh...must be a flash day. 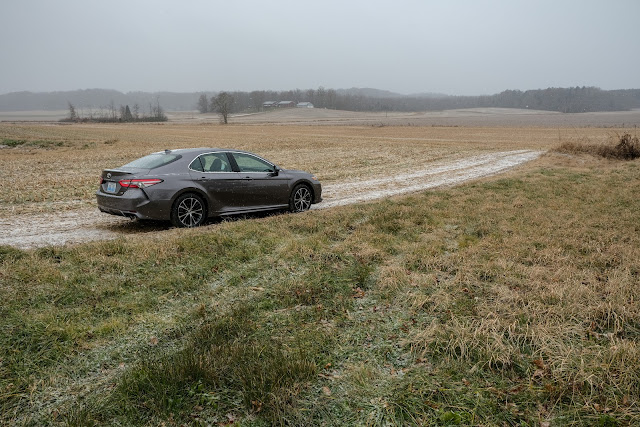 The snow started drifting in as I followed my construction industry guys down a rural highway in Indiana, just past the tiny town of Santa Claus (no! I'm not making that up!!!). We turned off on a small, one lane road and then turned again onto a dirt path. Snow and ice were starting to settle into the ruts in the road as the wind picked up and fatter, wetter snowflakes began to fall, faster and faster.

It was one of those "low light" days where the thick cloud base acts as both the ultimate light diffuser and a big neutral density filter. I followed the three big pick up trucks as far as I felt was tenable for my rental car and then I heaved my cases into the bed of the lead truck and we continued on for another half mile, the windshield wipers intermittently sweeping snow off the glass. I found a spot with a nice progression of foreground, middle ground and sweeping background elements and asked the driver of my truck to stop. I'd found a good spot to show the company's work, which involves  clearing  swaths of land for high voltage power lines and their attendant concrete pads. Now I just needed to figure out how to pose and light my three individual portrait subjects.

On all prior shoots of this extended assignment, in locations from Newcastle, CA. to the Florida Everglades, I'd been using portable, battery powered flashes to offset bright sunlight, diffuse sunlight and weak sunlight, but here was a situation with no sunlight and it seemed like flash might be contraindicated. More so since my flash would freeze every snowflake that flittered between me and my subjects and create an endless visual distraction. Instead I dug into the big lighting case and found a smallish LED panel I'd packed. I pulled a big lithium battery out of the camera backpack and fitted it onto the panel. I set the camera's white balance to "cloudy" and adjusted the LED's color temperature to 6500K.  I didn't want dramatic fill; you know, the kind I'm talking about where the sky in the background is dark but the foreground subject is in stark relief against it. I wanted something more subtle --- just a puff of light to give a little bit of modeling to faces and a sense of light having a rational direction --- and I wanted some eyelight. Just a little sparkle in the pupils to give each eye a nice catch light.

I used the small, Aputure panel on a stand over to one side to give me the barest hint of short lighting and I used it without any additional diffuser beyond the standard "comes with it" diffuser, hoping to balance it so no stark highlight/shadow interface gives away the sharper nature of the added light.

When we shoot on locations with construction professionals there is an impulse on their part to jump out of the trucks upon our arrival anywhere and stand around either waiting their turns or just watching the progress of the shoot. For most people lit location shoots are still novel enough to be interesting. But with a ten to fifteen mile per hour wind and an actual temperature hovering just above 20 degrees (f) I encouraged them to stay in the warm cabs until each person's turn came up. That way the cold wind wouldn't give them overly rosy cheeks that would be a saturated magenta mess which I'd have to fight later in post.

I was looking for a tight head shot with a background reference, a medium shot that would be a combination of portrait and more landscape, and then a wider shot that would give me a full reference of the location. As time progressed the snow came down thicker and faster so that by the time I was ready to photography my last participant we had to move and place a thicket of evergreens to the wind side of my subject guy in order to cut down on snowflake intrusion.

There was no way I wanted to change lenses in the middle of what was quickly becoming a snow downpour so I depended on the Fujifilm 18-55mm "kit-ish" lens to cover all the focal lengths I needed. I know it's not weather resistant but it was cold enough to brush snow off without melting it and, if I did destroy the lens I could always replace it. But my client had spent thousands of dollars in airfare, car rentals and hotels to get us into this position so the choice of destroying a lens or killing the shoot was an easy on to make... The lens is fine. And yes, I had back ups.

Once we wrapped the final shot one of the guys checked the weather and told me we were (unexpectedly) getting the south tail of the blizzard that hit the midwest this week. He encouraged me to get my rental car back onto solid pavement and get going to the airport an hour away --- if I wanted to get to Raleigh, NC the next day. I packed quickly and headed out to find progressively more trafficked roads.

The LED panel light was both subtle and effective and reminded me that it's nice to have access to a fuller palette of lights than just a bag of strobes. But, of course, today was the opposite situation. I found myself at an electrical substation in Raleigh on a bright, brisk morning with the sun as a backlight to my new portrait subjects. A small LED panel wouldn't even tickle the pixel wells of the camera sensor by comparison to the brilliant sunlight bouncing around the photo-scape.

Today it was back to the battery powered flash and the mid-sized softbox, all assembled on a light stand and bungee-corded to a gear case for stability. At half power it was just right for a close-in portrait and when I moved the light back to get a wider frame the full power setting just about handled the spread. I'll need to bring up the shadows just a bit but that's hardly an issue with the raw files from any current camera. Different lights for different situations. It's important to know when to switch gears. And it's nice to have the right stuff in your back to make a difficult scene work without telegraphing your technical underpinnings.

Now headed home to Austin and delighted with American Airlines associate, Diane, in Raleigh, who got me on an earlier flight and also upgraded me to 1st. A nice way to spend the final miles heading homeward. Tomorrow? Maybe just a swim and pizza later with Ben and Belinda. Now that's the good life.... 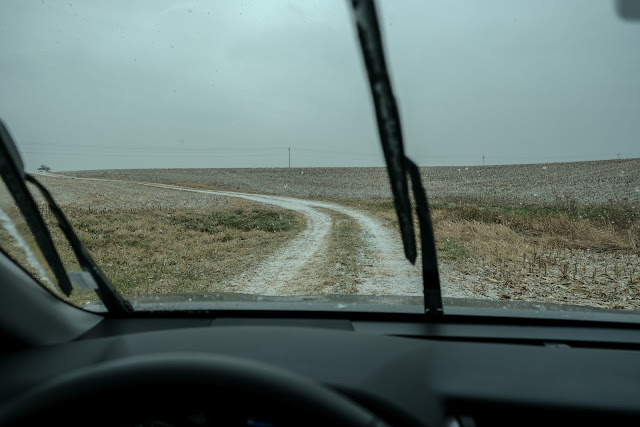 Posted by Kirk, Photographer/Writer at 13:59 2 comments: