In a most curious set of circumstances a Fujifilm X-H1 joins the inventory here at the Visual Science lab H.Q. 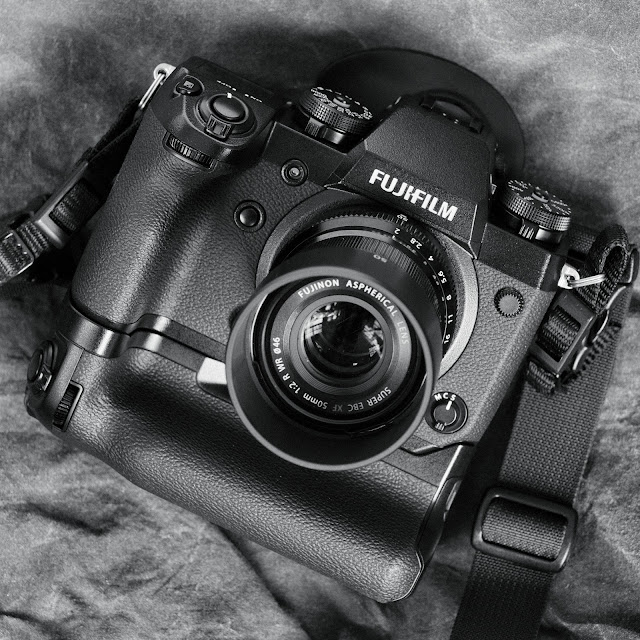 It seems, sometimes, that intentionality drives the universe. But maybe everything is merely coincidental. I started my day yesterday pulling stuff together in the studio/office that I planned on giving away, donating or trading at my local camera store. I figured that if the guys at Precision Camera even just valued my collection of antiquated light stands, extra tripods (both video and otherwise) as well as a large collection of modifiers and more or less unused Pelican cases, by the pound I'd at least walk away with some pocket change. Maybe enough for a Big Mac and a shake; with a little cajoling I might even get enough for Super-sized french fries....

I handed off a tripod to a long time friend who would best appreciate it (he can be very old school about technique). I handed off one of those Tenba stand cases that opens up in the studio to present a "wall of stands" but when zipped together will keep stands and tripods safe, even from the airline baggage handlers. Everything else went to the camera store and, after three trips back and forth from the car, I had a pile of gear stacked up in front of the rental/trade-in/repair department.

My "advisor" who would value the gear left me to my own devices and, of course, I was drawn to the cases housing the used gear. I never mind buying from these guys because they are good about checking out used gear before putting it on the shelves. They also have a generous return policy that goes a long way toward taking the angst out of surrendering ever more money for our hobby/profession.

Before I go on I have to go back 24 hours and set the stage. I'd just read Michael Johnston's long Paean to the X-H1 model on his site, here, and he left me salivating to try one. Everything he wrote resonated with me about the handling and overall design of the camera. When I got home I saw that I had a message from an old friend who happens to work at Fujifilm. He was calling because he reads the blog and wanted to see how I was getting along with the X-T3. I grilled him mercilessly about the X-H1. He told me over and over again that the video and overall imaging quality of the X-T3 was better but I dug my heels in and kept coming back to ....... image stabilization. He finally relented and agreed that if I wanted a Fuji camera with image stabilization this was it. But he did advise me to get more batteries and to be sure and get the battery grip!!! I thanked him for his candor and moved on to other tasks.

Later in the afternoon I read some of the comments about the X-H1 on Michael's blog: TheOnlinePhotographer, and that's where my momentary fascination ended. At least for the day.

Getting back to yesterday (this is getting confusing...and I was there!). I was standing in front of the Fuji used case and there it was. For the first time I can remember there was a minty condition H-H1 with the battery grip and the little vestigial flash they've been including with their fleshless cameras.
The price was amazingly low. I had my sales guys grab it off the shelf for me and I claimed it as my own. During the transaction process they store staff was already fielding calls for the camera since it had just recently hit their website.

The trade-in guys came back and proposed a value for my collection of studio build up and I walked out of the store having paid a little more than $500 for a camera and accessories that I had, the day before, contemplated spending at least three times as much for.

We'll see in the days to come if the camera is as good as MJ thinks it is but I can tell you two things right now: 1. It gets pissy if you use older, non-"S" type batteries (it shows the battery symbol of the older batteries in yellow and the new ones in white....) and the mechanical shutter is the quietest and most gentle shutter I have ever experienced. To paraphrase the line Rene Zellweger delivers in the movie, "Jerry MacGuire", "you had me at 'click'......

More to come. Right now I'm finishing up the last of the post processing on my month long job venturing around America's hinterlands and I'm also heading down to Austin for the Holiday Party at my dad's memory care facility this afternoon/evening.