The importance of testing gear instead of reading about gear on someone's blog or website. 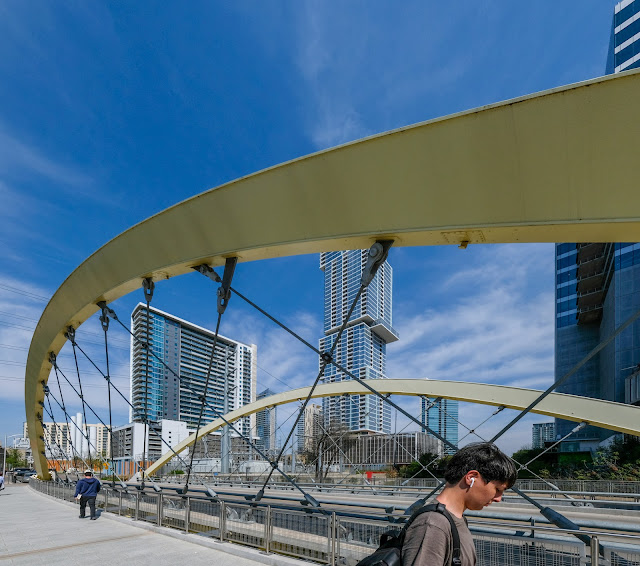 From: A lens you probably don't need and don't want to carry around...

I like to think that all serious photographers share one thing: a unique vision. And bundled with that unique vision is a particular way of looking at things; at interpreting some fragment of conscious reality in order to share it in a different way than everyone else. After all, if everything is just a faithful copy; without inflection, why should anyone bother to look at it? And I think about this when I hear from my friends who are busy reading everything they can get their hands on when considering a new lens purchase.

When we go to a site and read a review of a lens I think most of us would like to see a short set of objective measures. These would include: How heavy is the lens? How easy is it to use? Is it sharp in a way that's usable? Does it have an annoying color cast we'll have to end up correcting? How much does it cost? Is there something out there that's as good or better which I might want to know about?

For information like this I like a couple of test sites which include a European site called: Lenstip.com (they do subjective evaluations and objective measurements). Another site that used to be called photo zone.de but is re-branded as now: Opticallimits.com. They also use some objective measures and then pepper in their opinions. I never take their opinions about value (price versus quality) too seriously because everyone is somewhere else on the economic spectrum and what is too expensive for one prospective purchaser might seem dirt cheap to a heavy-duty user of the same product.

The people whose lens tests I rarely take seriously are people who are not either full time lens testers with the instruments to do tests correctly, or full time working professional photographers with a reputation for doing good work, and an extensive portfolio of examples I can browse. Everyone else falls into the same bucket in my mind = newbies with a passion for having an opinion. In fact, I rarely trust my own lens reviews because they are limited to the way I use the products and they are additionally limited (contextually) by what my actual use is for the images in the moment. Or, in the project at hand. I may want something soft and moody or snappy and saturated, but I might also not really care about edge-to-edge sharpness while you may be completely obsessed with the need for ultra-high resolution at the furthest corners while the lens is at its widest aperture. You and I would need to be reading reviews skewed in different directions for both of us to be happy.

You may have noticed by now but something I mention in every article I write about gear, or in a follow up article, that my results are only as good as you can see them on the screen and that if you are seriously considering a lens you NEED to hold it in your own hands, put it on your own camera and shoot it in the way you know you will want to use the lens for YOUR work. I ask you to never depend on anecdotal reviews when deciding whether you should buy a new miracle lens or just put that money into a treasury fund (and right now my money would nearly always go into a fund....).

My favorite story about this comes from a time when I was shooting for money with the Olympus 4:3 system. We did events and one of the lenses that was critical to my success in photographing conferences in hotel ballrooms, and other interior venues, was the Olympus 35-100mm f2.0. It was the fastest long zoom available for any format at the time and it was very sharp at f2.0. This was all back in the days when photographers were reticent to go beyond ISO 800, even with their full frame cameras. Having this fast lens was the difference between getting a perfectly sharp "presenter" photograph, up on stage or not.

The trade off is that the lens must have weighed at least four pounds! I would come home after three days of handholding that lens (in my left hand, operating the camera with my right hand...) and my left bicep would be sore. But the bottom line for me was that the photographs were sharp and relatively noise free.

So, one of my friends who does photography as a hobby, asked my opinion about which telephoto zoom lens to get for his Olympus camera and I immediately suggested the 35-100mm f2.0. After a bit of research, my friend, who just wanted a nice zoom with which to walk around and snap fun stuff, decided that I was clinically insane and should be on a psychiatrist's couch somewhere looking at inkblots. My suggestion was a wildly inappropriate lens for anyone who didn't need the combination of features that I did need. It also cost $2300!

Much depends on how the lens will actually be used. I use my 50mm (equivalent) lenses for social events, when I use it for work. That means I'm generally using it in conjunction with a hot shoe flash and most often I'm shooting at f5.6 or f8.0. I'm generating social images for use on websites and to help clients continue filling up Facebook, etc.

For these uses any decent $50 normal lens would work fine. I'd conjecture that, at f8.0, handheld in a hotel ballroom, a < $100 nifty 50 would do about as good a job as a Zeiss Otus 50mm f1.4 miracle lens. Maybe it would actually be better because I'd be able to handhold the combination all evening long without stress and strain. But I'm sure some Otus owner out there would look down their nose at my pedestrian choice because, from their point of view, the quality of the lens, when used wide open, trumps everything else.

Relying on someone else's test of a camera is also fraught with peril. In the present all cameras are good enough for most of the subjects for which people use them. Some people are sensitive to noise, some to size and many price. A smaller subset has allergies to confusing menus. You can tell me till you are blue in the face that "once set up you'll rarely need to delve into the Olympus menus on a daily basis!" but that does nothing to assuage my frustration and confusion at their interface.

Buying a camera is partially about buying a lens system so that's the first place most people should start. But after that it's all about what feels good. In your hand. In operation. In your budget. The Leica M10 might just be the best camera ever designed but if I can't afford the lenses I need and the back up body that functions as my security blanket then the camera (and by extension, the system) are unusable for me. I'd love to buy one of the Fujifilm medium format cameras, and a lens (please send me the 110mm f2.0, thanks!) but I can't see pushing my sister to replace her ten year old Canon Rebel with one.....

Jeez. The cool thing about being a consumer in the most fertile consumer market in the universe is that shopping is supposed to be fun. A bit less time reading that bad review and a bit more time figuring out what you'd like might just be the ticket to camera purchase happiness. Do I even have to write, "just sayin'"?


Posted by Kirk, Photographer/Writer at 13:43 7 comments: