Crazy fun stuff that I like to buy. This time is a half terabyte external Sandisk SSD drive. 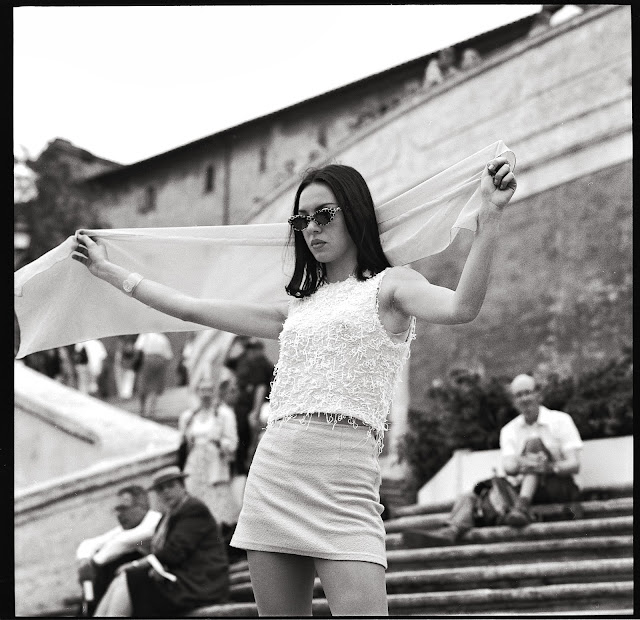 On the Spanish Steps in Rome. 1995. Mamiya Six camera.

I'm photographing the annual Summit conference for WP Engine at the end of the month and I learn new stuff every time I do this three day assignment. We move fast. They move fast. A few times last year we (the marketing team and I) had photographs from the CEO's final speech up on social media minutes before she left the stage. Three years ago I learned I needed a much faster laptop for the conference (no time to head to the studio to process and upload, we did everything within 100 yards from the main stage) so last year I finally retired the noble but painfully slow Mac Pro I had been using and bought a new one with a faster processor, more memory and an SSD HD. It's so much quicker. The narrow part of the funnel last year was how long it took to write files to my conventional (spinning disk) hard drive. So, this year I bought several of the Sandisk 500 GB SSD drives I found on Amazon for $89 each. I've already tested one of the drives and it's super speedy compared to the older tech. Now my big hope is that the new Fairmont Hotel here in Austin, Texas has a nice, juicy broadband connection with which to work.

This will also be my first year to use the Fuji cameras for a larger conference. I'll be shooting mostly photographs but need to also catch some B-Roll video for the client as well.  The X-H1 is particularly well suited to this. The real trick is in the upload. We shy away from 4K when we aim for fast delivery....

Last year, when I was shooting displays, and some demo areas that were in really low lighting, I used a monopod for stability but I ended up anchored to the camera. You can't just walk away from a monopod and think that your camera and the floor won't soon meet up,  and there were times I wanted to set a self timer, use a flash and stand with the hand held flash about ten feet over to one side. I have narrowed down my selection of tripods for photographs to just two. I may have "over narrowed" because while the two that remain are wonderfully rigid and durable neither is light weight and both are a pain in the ass to carry all over a hotel convention space.

I have my eye on a Benro tripod that might fill the bill for a very small, very light, take everywhere tripod. It's called a Benro Slim. It's carbon fiber, has a decent bullhead and only weighs something like 2.4 pounds. I know it won't be as sturdy as my big Gitzo but I also know I can strap it onto the side of my photo backpack and never notice the weight. It's for those times when I want to shoot interior stuff and I need to have the camera on an autonomous support so I can walk away from it to adjust lights, etc. (Darn, I was so enthralled with what I was writing just now and I took a break to look at the tripod specs on Amazon and decided, in the spur of the moment, to just go ahead and order it......).

The interesting aspect of this show for me is the immediacy of delivery that we're going to engineer. I'm working hard to figure out how to continuously, wirelessly, send files as I'm shooting to a folder on the laptop but I can't figure out (right now) how to continuously upload the images from the computer's folder to a Smugmug gallery without having to touch the computer. We use Smugmug.com to share the photographs with the team so they can quickly select and download the stuff they want to use.

If you have ideas for speedy, one man file transfer I'd love to hear them.
Posted by Kirk, Photographer/Writer at 22:18 9 comments:

Packing my bags for tomorrow's technical rehearsal of Terence McNally's, "The Immortal Longings." 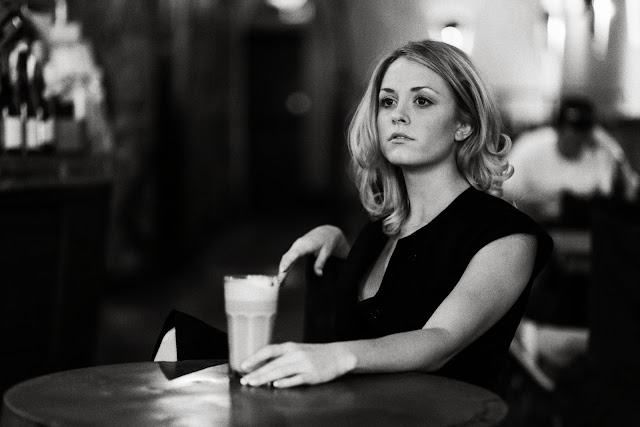 Photographed as an audition for Jana. I needed a great talent to pose for lots of the images in my LED book so I booked a session with Jana and we played around all over downtown but especially in Little City Coffee House. It's no longer there but I still have the photographs.

The photographs of Jana have nothing to do with the written content of this particular blog post but I like them and thought they should get some exposure. Beautiful woman --- coffee. What's not to like?

But really I just wanted to write about what I'm packing to take to the technical rehearsal of a new play that's about Diagilev and Najinsky, their relationship, and the revolution they created together in modern ballet. Our theater is hosting the world premiere of Terence McNally's (Four time Tony award winner, writer of "Kiss of the Spider Woman" and "Ragtime") newest play, "The Immortal Longings."

There are two different rehearsals during which I make photographs. One is the full dress rehearsal (coming up on Tuesday) and the other is the final technical rehearsal. The dress rehearsals usually have a "family and friends" audience which limits my ability to move all over the house to get all kinds of fun angles I like but the tech rehearsal is done without an audience and gives me full license to be everywhere I want to be except on the stage itself (too dangerous and distracting). The photographs I take are used in advertising and public relations, and appear all over Austin and as far away as "American Theater Magazine" and most recently in the "New York Times."

My gear inventory is simple and straight forward for tomorrow. I'm taking two Fuji X-H1 bodies and one X-T3 body. I'll put the 50-140mm f2.8 lens on one X-H1 and the 16-55mm f2.8 on the other body and use both of them handheld. For the first time since I started shooting theater I am planning to put the 8-16mm lens (at 10mm) on the X-T3, place it on a tripod right at stage level, center; pointing up a bit, and trigger it with a remote release. I'll pre-focus at 15 feet and try to compute a good average exposure level for the spotlights on stage. I just thought I'd try something new and different (for me).

I must confess that I do miss the days of yore when we would do staged shots for marketing instead of trying to catch our photographs during run of show. I'd drag in multiple strobe boxes and many flash heads with soft boxes, and some with grids, up onto the stage and we'd shoot Polaroids and do a bit of collaboration with the marketing team. It was fun and we never had to worry about "file noise" or things not being sharp because of shutter speed limitations. It was time consuming and hard labor but the photos never looked better.

Seems strange, all of a sudden, not to be heading to San Antonio in the morning. I'm already missing having lunch the memory care facility with my dad and his two favorite table mates, Marianne and Jimmy. But at least I won't be racing back to Austin in a sweat trying to make it to the theater on time after lingering too long in the afternoon, reading the New York Times to my dad.... and sneaking him small bags of Hershey's Kisses. 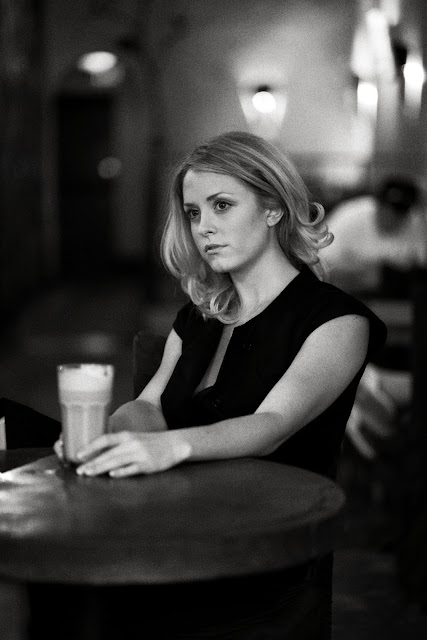 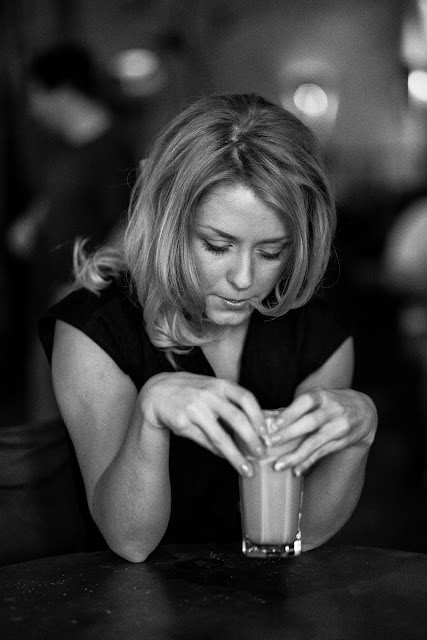 Waiting to meet someone who is perennially late, or unreliable.

Posted by Kirk, Photographer/Writer at 21:47 3 comments:

The temperature flirted with one hundred degrees today. I officially pronounce the beginning of Summer in Austin. 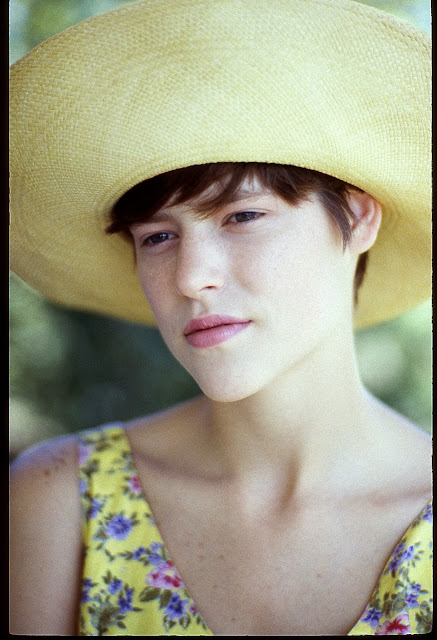 Model at Enchanted Rock State Park, outside of Fredericksburg, Texas.
Dressed for the heat wave.

I usually like the hot weather. Today though I was under the weather. I don't know if it was the stress of recent events or a bit of hypochondria but I woke up feeling a bit less than 100%. Some gastrointestinal distress and a bit of a headache. I usually ignore stuff like this and today was no exception....early on. I went to swim practice but I threw in the towel after an hour and headed off by myself for coffee. I came home and took some acetaminophen for my headache and then bowed out of our usual Saturday family lunch to take a nap on the bed. By mid afternoon I was back on my feet. A weird thing about me is that when I'm tense and have a headache the best medicine seems to be to put on some walking shoes, a wide brimmed hat, and some sunglasses and then go for a long walk. Seems that walking meditation short circuits the worry wiring and gives me a lot of relief --- even when the mercury soars.

In the past I would grab whatever camera I was infatuated with for a hot walk but today I actually thought about size and weight. The choice for today was between the Canon G15 and the Fuji X-E3 with a 35mm f2.0. The Fuji won. But mostly because it was such a bright and contrasty day and I figured the X-E3 would do a better job handling the wide range of tones. I put an extra battery in one pocket and a credit card in the other and parked near downtown. To be honest I didn't see much I was interested in photographing. I came home with five mediocre shots on the memory card which I flushed by re-formatting. But I came home without the headache and that was more important to me in the moment.

I have really come to enjoy the X-E3 in the same way I used to enjoy my old Leica rangefinders. These cameras are small and light and are perfectly paired with the 16mm f2.8, the 23mm 2.0, the 35mm 2.0 and the 50mm 2.0. In fact, I have an urge to buy one more of them (but this time in silver....) and to use them with the above listed lenses as a lightweight travel kit. But being the somewhat lazy photographer that I am I'll probably also drop the 18-55mm f2.8-4.0 zoom into the bag just for those times when, you know, I want to zoom instead of fumble with lens changes. As you are probably aware, the minute I pick up another X-E3 Fuji will announce the X-E4 (or whatever number those superstitious camera makers choose) which will have IBIS, the 26 megapixel processor of the X-T3 and a new and improved Eterna profile.... Ah well.

At any rate the X-E3 is a perfect camera for people who are looking for small, light and relatively inexpensive. While I wish the EVF eyepiece was a bit bigger and had a higher eye point it does make really nice photographs and I'm actually glad to have one. It's good enough to prevent me wanting an X100F.

No headache now and my stomach is fine. I guess sometimes a long walk in the warm air really can be medicinal.

Posted by Kirk, Photographer/Writer at 21:16 3 comments: