In defense of standard, slow, zoom lenses. What's not to like? 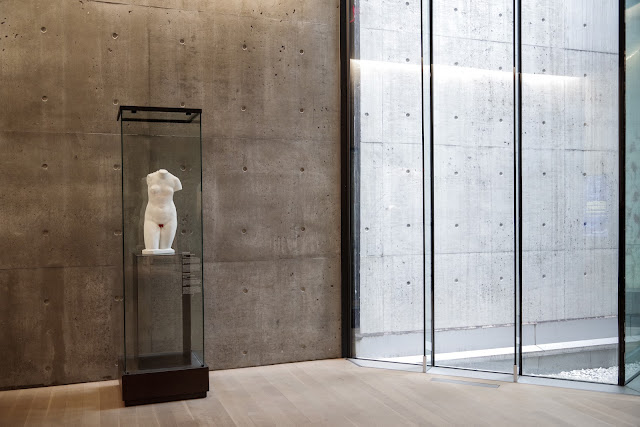 Many photographers I know, and many photographers who broadcast on YouTube and DP Review, look down on any zoom lens that isn't f2.8 or faster all the way through its focal lengths. The idea being that you'll finally be able to shoot in low light situations without difficulties. Another part of the supposed allure is "bokeh" (which really refers to the quality of the out of focus areas but which has been bastardized by common misuse to mean any out of focus background) or one's ability to easily throw a background into an anonymous blur of visual ambiguity. At a certain level there is also a wide spread belief that because "faster" zoom lenses are bigger and more expensive they are able to make images of better quality. By that I mean higher sharpness, butch-er contrast and more resolution.

Most of the f2.8 standard zooms are 24-70mm focal length range lenses which, for me, means some wasted engineering at the wide end and a total lack of happiness at the (modestly) long end of the lens. They are certainly not providing a focal length at the "telephoto" end that I find useful. Too short by about 30mm....

In addition to being frightfully expensive (and too short) the 24-70mm, f2.8 zooms are much heavier than their more pedestrian counterparts. Unless one is constantly shooting in low light, or training to carry weights around all day, these lenses represent an overkill case that's almost funny. My preference in lenses, regardless of your chosen system, is the new classic 24-105mm f4.0 or the Nikon version, the 24-120mm f4.0. Yes, you might "lose" a stop at the wide end but you'll gain a much great range of focal lengths and, oddly enough, you might find the slower lenses to be just as sharp at f4.0 or sharper.

Counterintuitively, I took the 28-105 with me to Canada to shoot in just about every situation. Belinda loves museums so the big Musee Des Beaux Arts was fixed on the radar from the beginning of our trip planning. I knew that it would be mostly darker rooms with brighter lights just on the painting and sculpture --- but my interest was not copying art work but making photos of the interior spaces, the venue and the people appreciating the art. In the "olden" days I would have taken several different prime lenses, each with a fast f1.4 or f2.0 aperture. But this was vacation/holiday and I just didn't have the energy to switch, switch, switch lenses all day long. Not if an alternative existed...

The advantage of a mid-brow, standard zoom lies in its smaller size, lighter weight and also its lower acquisition price. My total investment in the system in hand at the museum was about $1500. That was the price of a used, but mint, K-1 body, with 36 really nice megapixels, and a brand new standard zoom. One of the key features that makes the K-1 a good travel camera is that it has really great high ISO performance and very effective in body image stabilization that works with every single lens you attach to it.

Instead of relying on a wide aperture to provide a fast enough shutter speed to both hold the system steady and also freeze subject movement I went in a different direction and depended on the camera to produce clean raw files at ISO 1600 and 3200 while leaning on the I.S. to allow me to shoot at shutter speeds as low as 1/15th of a second with no real image quality concerns. Even when stuck at f5.6 and 105mm I felt that the images were as good as any I'd gotten with older, fast lens techniques. It also meant that I didn't need to carry along multiple lenses or multiple lens and camera combinations. 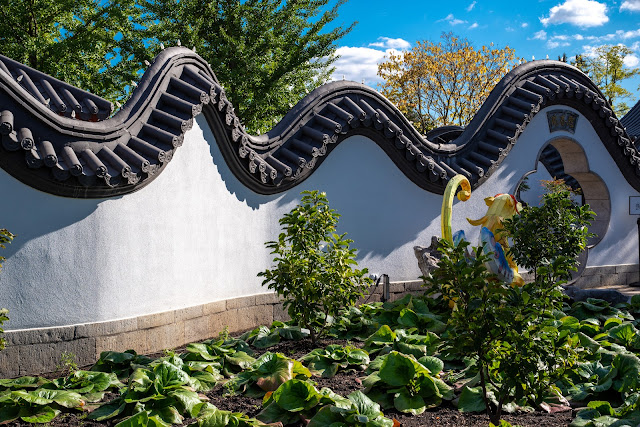 The Chinese Gardens at the Botanical Garden.

Where a small, less highly spec'd standard zoom comes into its own, though, is in exterior photographs during the day. Overcast, sunny, raining, etc. It doesn't really matter as long as you have a camera that delivers ISO performance that matches your taste in ultimate image quality. For the image just above I was shooting at ISO 100 and f8.0. I'm sure my shutter speed was somewhere around 1/400 or 1/500. I can't really imagine what advantage an f2.8 zoom lens would have had in this situation. By f8.0 nearly every lens I've used performs very well and having both the extra zoom range and the smaller lighter profile made for a more enjoyable shooting day.

The reality of lens design is that lenses with smaller apertures can be made to a higher performance standard than faster lenses with bigger glass elements. It doesn't always happen but the math points to smaller lens elements being easier to make and quality ensure. I presume that there are also more difficulties in assembling and calibrating the more complex designs required by faster lenses.

I think Pentax struck a nice balance between price ($499 US) and overall performance. But I'm also impressed by the lens I left at home; the Panasonic Lumix 24-105mm f4.0 (constant aperture).
The optical performance of the Lumix is really superb with the lens mostly at a high level for sharpness and contrast already at wide open. I find the two ends of the focal length range to be excellent at f4.0 while in the middle ranges, if you want the corners to be sharp you might need to stop down to f5.6. The lens and S1 camera together, using dual I.S., are as close to perfectly stabilized as I've found across all systems for sensors bigger than micro four thirds. And its performance with the 24-105 is close to that of the Panasonic G9 with the Olympus Pro 12-100mm. Pretty amazing.

Given the sensor performance of the S1 I can only imagine that the system would be great for travel. It's too bad I wasn't ready to bring it along on our travel adventure but I didn't have enough hands on experience yet with the camera to be comfortable. Next time.

Anyway, don't reflexively turn your nose up at a slower-than-f2.8 standard zoom lens. You may be passing up a sharp, well behaved optic that fits into your travel and shooting parameters much better than a more "prestigious" fast lens. And you'll save enough cash opting for the slower lens to pay for the plane tickets for your next adventure.

That's all for now. Write as comment. Tell me about your favorite mid-range zooms. I'd love to know what's out there.....

Posted by Kirk, Photographer/Writer at 13:48 14 comments: 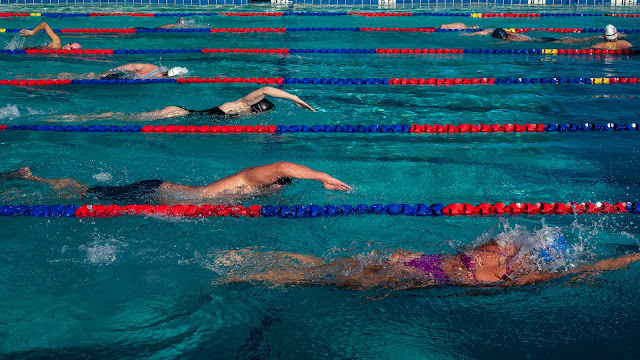 My expectation, based on years; no, decades! of experience was that the water in the Western Hills Athletic Club outdoor pool would be at or near 80 degrees when I arrived for swim practice at 8:15 on Saturday morning. The club consistently chills the water in the Summer or heats it in the Winter in order to try to hit a range of between 78 (on the cool side) and 82 degrees at all times; rain or shine, heat wave or frosty cold front. Someone got lazy last week and decided that Austin's rare cold snap would be short lived and inconsequential. They decided to wait on firing up the heaters for another time...

When I got to the pool there was a sign just inside the main entrance to the facility letting everyone know that the heaters had not been on and that the water temperature had dropped to about 70 degrees. That's cold. At least for thin blooded Texans that's cold.

Quite a few swimmers looked at the sign, grumbled, trudged back to their cars and drove away. A smaller crew stayed and decided to give it a shot. I was expecting entry into the water to be shocking. An instant, whole body awakening. But it really wasn't bad at all. The aversion to the 10 degree drop is more a matter of state of mind than dangerous reality. I stood on the deck in my swim gear for about five minutes before I jumped in and started the warm-up (and, really, it was a warm up). The cold air on my skin caused the water to feel much less cold on first contact, and by the time I finished the first, fast 400 yards I found myself acclimating just fine.

The interesting thing about the cold water is that we all rested less between sets, swam the sets harder and faster to stay warm, and actually put in more yardage than normal. At the end of the workout (10 am) we'd knocked out 4500 yards, or close to three miles of fast, engaged swimming. Our expectation of comfort was replaced with the reality of bracing cold. Our expectation that it would be a routine workout was replaced by a need to get in more yardage to stay warm and to keep our toes from turning blue.

When I left the pool and headed for coffee my arms were already feeling the increased effort. I wasn't quite "sore" so much as feeling muscle tight and muscle fatigue. It was such a psychologically pleasant feeling that I went back again Sunday, knowing the pool was still not heated, to do it all over again.

If you had told me before I got in my car to head to the pool on Saturday morning that the water was 70 degrees I probably would have saved myself the five minute drive and decided to substitute my swims this past weekend for a few leisurely runs. But, in retrospect, I learned I could swim fast and well in water that was different. It's nice to know that we are, in a narrow band, able to be flexible and to still perform.

Beats the hell out of watching Saturday morning cartoons and eating donuts.

Posted by Kirk, Photographer/Writer at 09:35 2 comments: