The Sigma LCD View Finder, LVF-11, finally showed up. Ordered last year...was it worth it??? 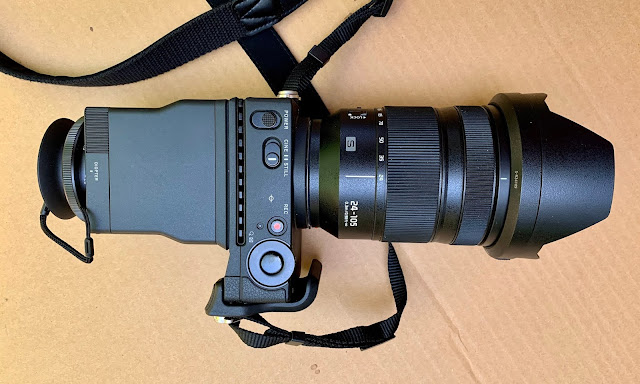 Top view of the Sigma fp with the hood/loupe in place.

You are probably aware that the Sigma fp camera has no EVF, no optical finder and its operation depends entirely on your ability to see and engage with the rear screen of the camera. A screen that neither tilts nor swings nor facilitates narcissistic selfies. If you really intend to use this camera in bright sunlight, or you need a magnified view with which to fine focus you'll need to find some sort of magnifying loupe to both block out extraneous light and also to magnify the information on the screen.

Okay; I get it. I knew about these limitations when I bought the camera, but I wasn't too worried because the demo version I saw had a nice view finder loupe on it and the view looked good. Little did I know that these Sigma LVF-11 hoods, made expressly for this camera, would be completely unattainable in the U.S.A. for the last six months. In the interim I bought several stop gap products, one of which worked well enough and one which was a waste of about $100. 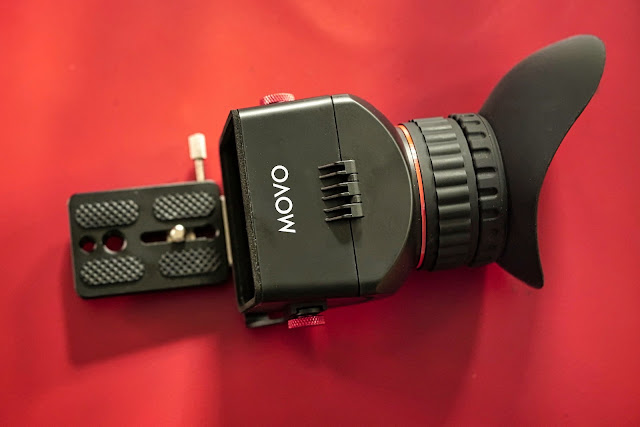 this "stop gap" loupe was only $59 and has a feature I wish the Sigma loupe shared. The body of the loupe is hinged so I can swing the magnifier lens up and view the rear screen directly. The mounting hardware worked to position the whole apparatus in the right place and the buttons along the back/bottom of the camera were still accessible. But....the finder construction isn't quite strong enough to ensure a tight fit with the back screen and I would get a bit of light coming in from the top where the whole melange tended to gap. If you aren't picky and just need a decent loupe for sunny days this might serve you pretty well.... It's all plastic and I have trepidation about the mounting plate integrity.

The other device was a Hoodman loupe but there was no elegant way to mount it to my Sigma fp so I finally gave up on it.

The Sigma loupe gets a lot of things right. The mounting plate on the bottom is stout and sturdy and attaches with a tripod socket and a separate positioning pin which means there's none of the dreaded "plate twist" which plagues the cheaper finders. I like the 3/8th inch tripod hole because it makes me feel so -- European... Once the loupe is mounted you'll have to take the whole thing off the camera if you want to view the LCD screen directly. Too bad we don't have a hinged design... On the other hand that probably makes the Sigma LVF-11 sturdier and less flex-y. 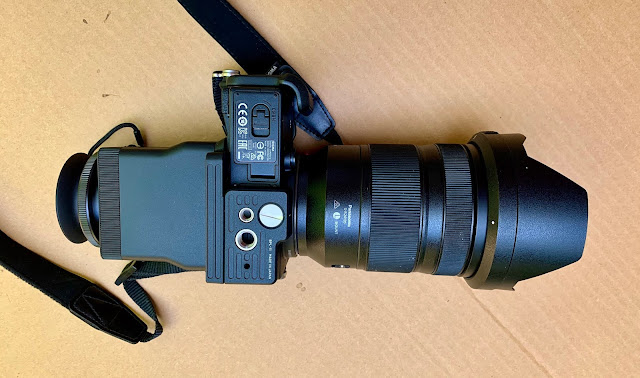 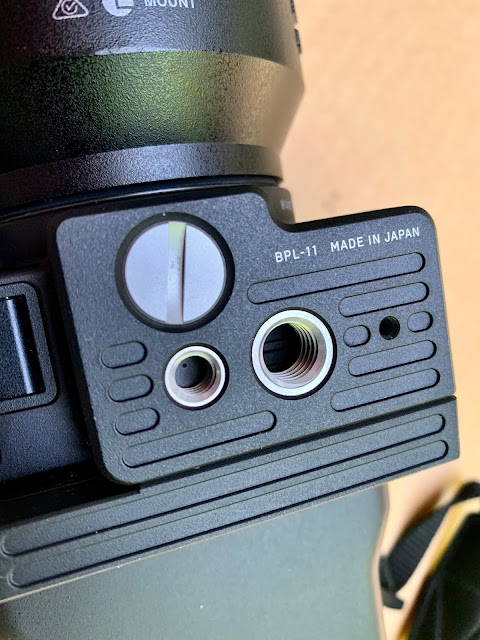 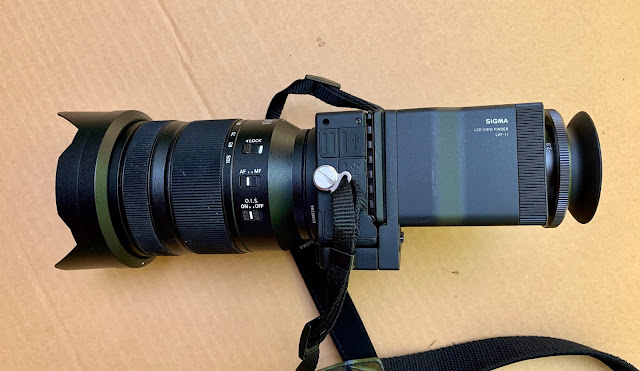 The loupe extends very far back from the camera and it's awkward to carry around; especially with a big, fat, heavy lens mounted on the front of the camera. If you are working on a set it obviously no problem but if you are out doing art or shooting in the street you will have just traded away even the pretense of discretion and low profile photography. 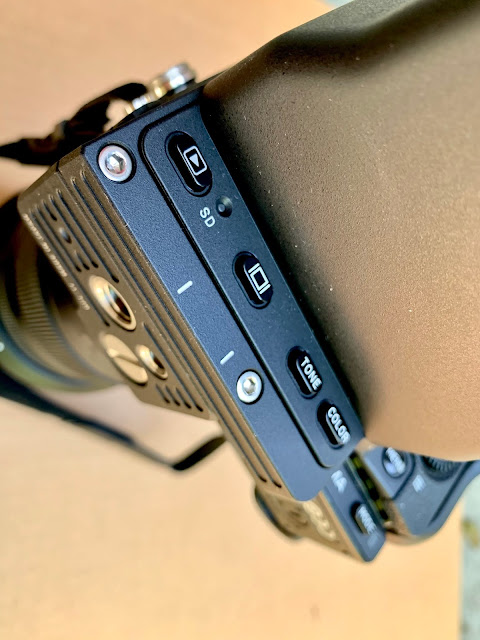 these buttons are spring-loaded extension buttons that engage the buttons on the camera.
They worked fine, let the loupe huddle up to the camera better, and didn't give me
any problems on my long test evaluation. 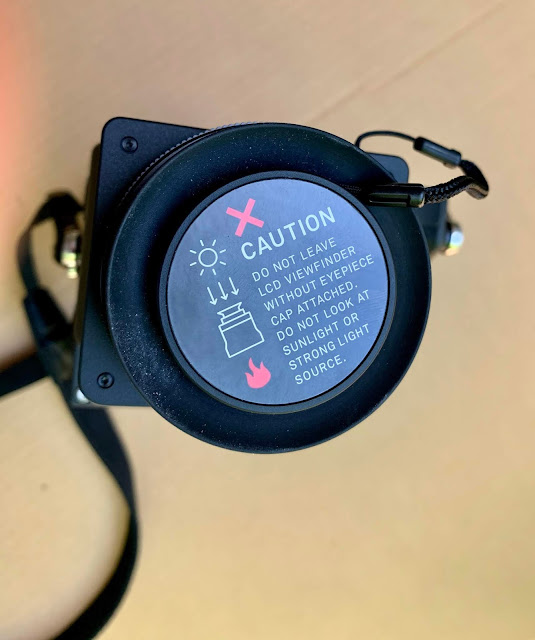 The finder optics come with a  protective cap that fits snuggly and is tethered
to the body of the Loupe. It fits TOO snuggly and is a bear to take off if you
push it on too tight.

The actual optics of the loupe are very sharp and clear and the finder magnification is 2.5X. The image through the eyepiece is huge but there is one problem: if you wear glasses there's no way to see the actual edges of the frame. This is not a "high eye point" finder. You'll even be moving your naked eye from edge to edge to get in all the information. I guess the only way around this would have been to either make the finder with less magnification or to have increased the lens-to-screen distance more. The way it exists now might be the most practical compromise between the two.

The finder optics are adjustable. You can use the ring surrounding the eyepiece to focus the whole system onto the screen. The "diopter" settings are marked but hard to see at first since they sit on the body of the optics, just forward of the large, knurled focusing ring, in a little channel next to the body of the finder.

If I use this set up for actual work-work I'll invest in about a one inch strip of black gaffer's tape, adjust the eyepiece exactly for my vision and slap the tape on to lock it down. If you wear the camera on a strap and walk around the lake with it the knurled ring will probably contact your clothes and change its setting, if you forgo the tape...

With a hand grip attached to the tripod mount under the camera the whole jumble of gear is quite handhold-able but I don't think it's an optimum way to use the camera. It's just not a run-and-gun piece of video gear. Mostly because its reason for existence, in my mind, is its ability to shoot .dng/raw video. But if you are shooting 10 or 12 bit raw video you'll find that image stabilization --from the camera's electronic set up or the in-lens I.S.---is not available. Once you take I.S. out of the mix you are more or less screwed and consigned to a tripod, gimbal or monopod. I'm steady enough to take good stills without stabilization in most situations but video is a whole different animal. A little shake goes a long way...

So, is this loupe worth $292 and six months of nail biting anticipation. Part of me says, "No fucking way." I think they should have included it in a basic package with the camera. $1900 for a naked brick of a camera is already a big "ask", to add another $300 bucks to make it a workable tool for shooting in exterior lighting seems....presumptuous.

On the other hand, I spent the afternoon shooting various video clips to test not only the finder but also to see how the .mov movie modes worked. I found that shooting 4K in the All-I format at 200 Mb/s was actually really great. And being able to use the rig just like an old Super-8 film camera (at eye level) was a nice throwback. In a week or two I'll probably get over the cost of the accessory as long as I'm really enjoying what I get out of the camera. And I have to say that it's a much better viewing experience than trying to shade the camera screen with one hand while shooting; just to see what I get.

With the loupe mounted in place it's an unusual look for the camera and totally messes up its low profile appearance as a still photography camera. But as a quirky and powerful video tool the loupe is fine.

After an afternoon messing with the diopter adjuster and just getting used to the handling I was happy/comfortable/at home grabbing a Panasonic S1 and shooting video with solid I.S., a great EVF and instant access to the rear screen. But I like the video files from the Sigma fp just a little bit better.

It's always this way; a compromise between quality and operational ease...

Posted by Kirk, Photographer/Writer at 14:35 11 comments: 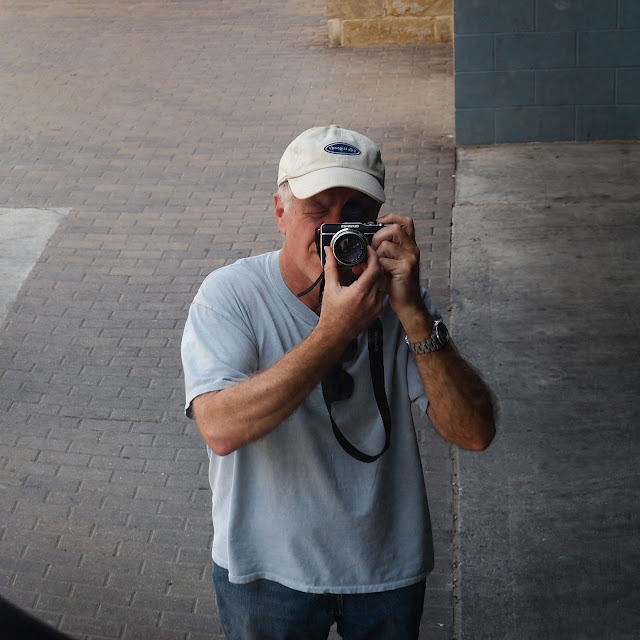 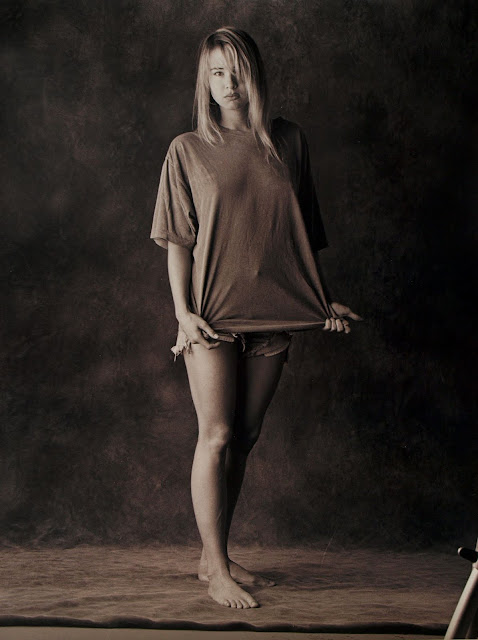 Added: If you want VSL readers to know about your own Instagram stuff you are welcome to post the info in the comments. Might discover new stuff..... Best, Kirk

Posted by Kirk, Photographer/Writer at 12:53 33 comments: