There seems to be a perception that we're all on the hunt for one perfect camera. Not me! 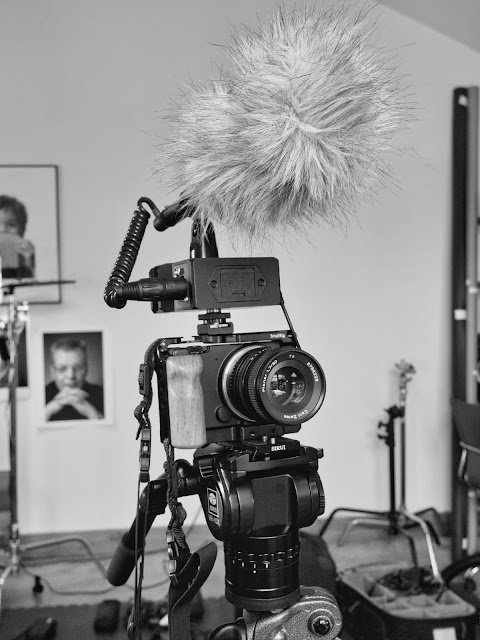 While it's easy to get lost in the Jungle of Too Many Choices I think it's just as easy to get mired into stagnation by the soporific haze of narrowing down your choices too far. When everything starts to look like a wide shot it may be because you just have a 28mm lens and no other choices. When you limit the scope of tools at your disposal you eliminate a valuable avenue of experimentation.
There are writers on the web who insist that your work will improve if you (doggedly) use one camera and one lens for an entire year but I don't think that's based on anything more than some people being really, really slow learners; or too lazy to try new stuff. I never thought about the damage caused by self-limiting your choices when making art but then I read a post from a person who, as a seven year old, ate one microwaved honey bun (packaged cinnamon pastry) every single morning for an entire year. His health still suffers 51 years later. It's good to have multiple sources of inspiration. And it's good to mix it up a bit at breakfast.
If I valued landscape photography enough, and it was the only interest in my life, I could see buying a very nice view camera or high resolution, medium format digital camera and lens and using the combination every day. If I did good work with it then my brain would create a virtuous circle of cause and effect that would re-inforce my singular choice. But I'm far too sybaritic and mentally healthy to bow to too much obsession.
I have a small collection of cameras and I find that each one does something very special. Something that enhances my pleasure when working on projects that cover wider ranges than any one specialty. That's not to say that I'm especially good at the full range of work I like to pursue but if I wasn't having fun in each of the niches I certainly wouldn't waste my time on them.
When we taped our recent virtual gala show at Zach Theatre I was happy to have three matched, big, heavy Lumix S cameras on tripods. There was lots of space on the exterior of each body and a plethora of external controls. My hands didn't accidentally push misplaced buttons and nothing overheated or shut down. The batteries lasted a long time.  The lenses I used were big, ponderous and flawless (for the most part). They were exactly what I wanted to use for highly controlled project and the fact that the cameras and lenses were big and heavy was meaningless since everything was brought to the shooting area on a cart and anchored in place for the run of the show. And part of their charm was the large range of options and controls. Which are so much easier to offer on bigger bodies.
But lately I've been working hard to develop a snapshot perspective for my personal art videos that would work well on the street, on the move and in places where big tripods and heavy cameras might be a disadvantage. I'm basically looking for the Leica M series equivalent of a video camera.
That leads me these day in two directions. The first is the Panasonic G9 which does so many things so well. The second is towards the Sigma fp which has a wonderful look and does so many things....eccentrically.
In the photo above I'm showing a basic rig with the Sigma fp. In most situations I'd probably use the 24-105mm Panasonic lens but I like the looks I get with the Zeiss 50mm and the Sigma 45mm. And those lenses keep the package profile small and light. For most of my street video I don't bother to use a microphone so I take off the audio interface and the microphone and just use the bare camera. But, for a quick interview or just a ten second "blurt" the audio package is good. It's a Beachtek interface that provides an XLR input and phantom power for the Aputure Diety shotgun microphone. You could do worse. I have. 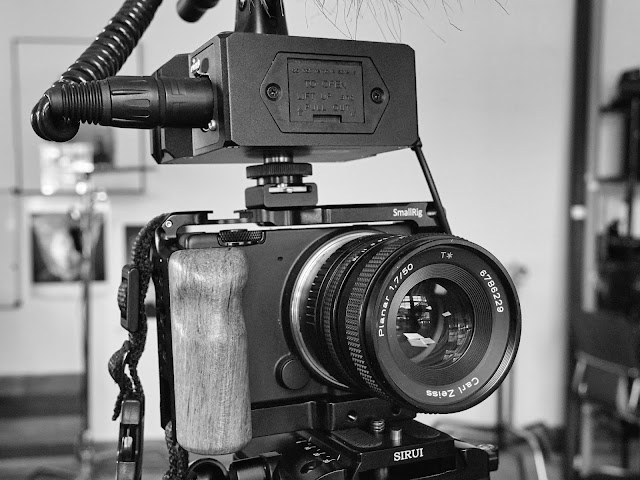 I almost always use the Sigma fp with a Smallrig cage. It's like a perforated exoskeleton for a camera. A small, metal set of "guard rails" that have 3/8ths and 1/4 screw-in points everywhere which makes attaching various accessories pretty quick and easy. This cage is cheap (as far as dedicated video cages go) and comes with a comfortable hand grip made from real wood. With the strap attaching only on one side the cage makes the camera an even more manageable package for walking around video. 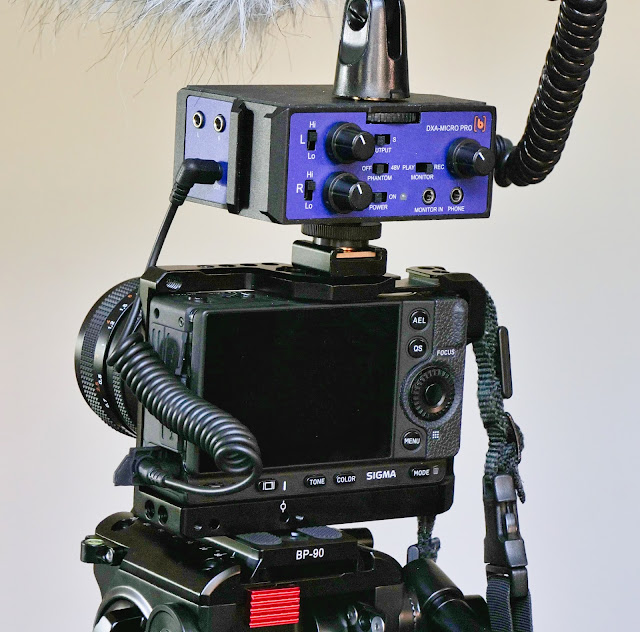 When I use the Sigma fp it's to make images and video that looks quite different from the work I do with the bigger cameras. It's small enough to take anywhere but it lacks stuff like: long battery life and an EVF and that makes me work in a different way than my more adaptable and amiable cameras.
The Sigma is more portably available but it makes me work harder. But you probably know that I think working friction has to be present in order to make good art. Work cameras should labor fluidly but art cameras should keep you on your toes. 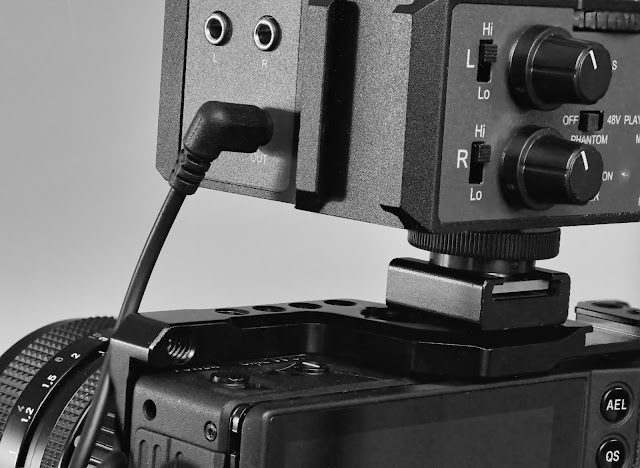 One of the things I really like about working with cameras that make use of accessories like the audio interface (or the enormous Sigma loupe for the LCD) is that the add-ons can be pulled off the camera in order to streamline it. The accessories can be left in the drawer until needed while the camera and lens parade around nearly buck naked. But still capable of banging out great images and nice movies.
The Panasonic G9 or a Panasonic GH5 might be the all around best compromise for a video street shooter because they are more geared to all kinds of diverse work and less stingy with features. It's always a trade-off though. There's something about the Sigma fp that I still can't put my finger on but I know that when I think of the camera during the day I'm almost certain that there's crazy good potential there that I might learn how to tap. If I keep it with me regularly, and work hard enough.
Then again, using the bare bones fp for a while reminds me (when the phone rings or a client texts) that when you have to get stuff done quickly, with practiced fluidity, nothing beats the high functioning, all around tools like the S1H.
I'm not sure it's a great idea to mix too many systems. I've tried it in the past and it does deliver some resistence based on having too many choices because that leads to procrastination and paralysis. That my fp takes the same lenses as the Lumix/Panasonic systems is a step in the right direction. And the fact that it's a very "singular" product.
Mixing Nikon, Canon and Sony together in the same bag? Only if you are actively trying to become a schizophrenic.
Added on Friday morning. Thanks Eric Rose!  https://petapixel.com/2020/10/02/sigma-sent-two-cameras-into-space-to-capture-earth-from-100000-feet/
Posted by Kirk, Photographer/Writer at 12:45 7 comments: