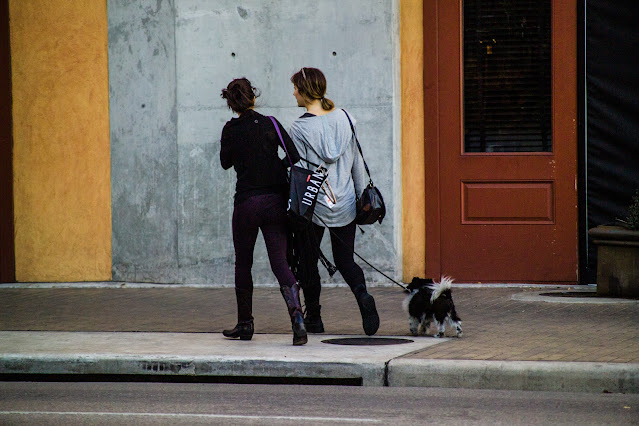 This image has nothing to do with the post below. I just liked it and wanted something to put at the top of the post. And...dog.

There is something exhilarating about working in a medium where you are still very much a "student." While I've been feeling that photo assignments have been growing stale for me lately the challenge of working at the very edge of what I know in the video editing world is both daunting and very satisfying.

My friend, Kenny, is a wonderful singer and he was asked to "cover" a couple of songs from an upcoming, virtual, online holiday party. The client wanted him to have us create two videos of him singing; one for each song, with a bit of comedy at the end of the second video. Kind of a "sign-off" for the evening.

Kenny and I worked on a bunch of video stuff for Zach Theatre (you saw him in the opening video of the virtual fundraiser last month - the guy sitting on the bench, on the bridge, at the very beginning of the video. He gets up and leads the first group of people towards the camera) so he called me and asked me to produce the video. The budget was minuscule and the resources scant, but it was a chance to try out a few more video techniques in the service of a friend. I jumped at the "opportunity."

We shot all the footage on Saturday and I started editing last night. The actual files look amazing to me. My edit? Less so. The files have some of the best color I've seen. It actually appears richer and has more apparent depth than the stuff I've shot on much more expensive cameras. I think the secret was shooting 1080p in a high data rate, All-I file. That, and getting a nice white balance at the very beginning of the shoot.

But yesterday and today reminded me of how much I still need to learn in both planning projects and in editing them. Let me tell you what I learned and re-learned.

I shot Kenny in wide, medium and tight shots with a gimbal mounted camera and got great footage. What I didn't get and what came back to bite me on the butt was b-roll. Or the abject absence of enough b-roll. Even though Kenny has a nice enough face and a warm and engaging personality it gets boring to watch the same person sing a song for three minutes and twenty seven seconds.

I should have shot more: hands on the keyboard, playing the piano, more fun martini shots, some "grand piano hammers hitting strings" shots, and even some shots of just his hands in close ups. I flubbed the b-roll and paid for it with some painful editing sessions today. Part of the fault lies with my lack of pre-planning and part with rushing through the shoot.

Here's another super-genius thing I learned when I started editing on a big screen: Stuff that looks great and sharp on a tiny, tiny rear LCD on a camera doesn't necessarily always look sharp on my monitor. I updated my camera firmware and the big benefit was supposed to be much better C-AF. And it sure did look good on the pixie screen but sometimes the camera hunted and I'd be in the middle of a nice clip only to have it fall out of focus in the middle. Wouldn't having more b-roll be a nice thing?

I had to scramble to find better shots and figure out how to edit to cover up my camera's grievous errors.  Lesson? If I insist on shooting with those Panasonic cameras I need to make sure I'm using manual focusing instead of relying on the cameras. Sure, go ahead and let me know in the comments just how great those Sony A7Siii focusing features are. I'll read it.

But the thing that saved me in the edit was the fact that these songs and the overall presentation could be a bit campy and a bit retro so I used some transitions that good taste had previously prevented. Aesthetics go out the window when you need to deflect. And entertain.

I did learn a bunch of new editing techniques that work well for making music videos. Since all the clips of Kenny performing were done with the same sound track playing on them I was able to select all four clips (different angles, different focal lengths) and the soundtrack and have them all synchronized automatically instead of trying to sync up each clip individually. I could lay the four visual tracks on the same timeline as the audio track and then cut back and forth between the takes to make the edit. It was a much faster way of working. Very similar to multi-cam editing.

I also learned that when stuff looks good in Final Cut Pro X but parts don't play back correctly after you export everything the safe fallback is to go back to the timeline you edited, copy the whole assemblage, open a new "project" and then paste everything into the new project. I dodged two bullets that way.

Okay. That's enough about video editing for now. I guess it's time to look forward on the schedule and get ready for tomorrow's live theater photography and then another video project on Saturday. Seems like I'm back in the busy mode. But I really am turning a lot of stuff down. I'm only interested in the fun stuff right now.

Posted by Kirk, Photographer/Writer at 20:55 6 comments: