Photographing a "Pandemic Safe" outdoor concert. Our theater figures out a way for "the show to go on." 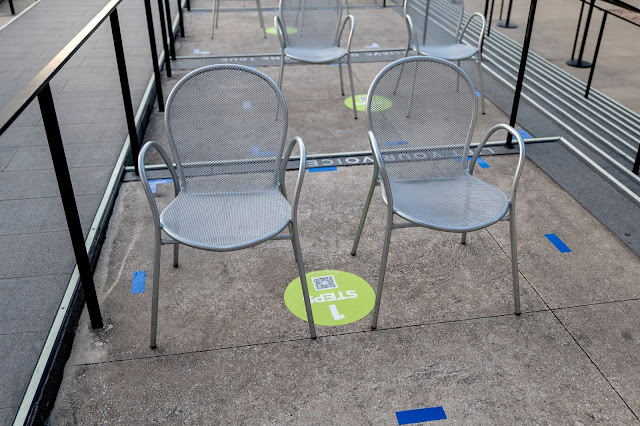 Zach Theatre has a big, beautiful stage with seating for 400. Too bad we can't use it this year for live performances. But creative people tend to be.....creative and so the theater's team got together with health experts and figured out how to use the expansive plaza on the theater's campus to produce a series of live concerts. We had the first one last night and it was a raging success. We did a tech rehearsal the night before and I showed up to shoot promotional photos to kick off the series.
Between now and November 8th the Zach Theatre is producing a series of live concerts that will run one hour in length and will (weather permitting) be held outdoors in the plaza. Seating is set up in pods. You can get tickets as a socially distanced couple all the way up to a "cabana" with seating for six. All pods are distanced about 10 feet from each other. Even though the concerts are held outside the theater is insisting on staggered arrivals and seating to reduce crowding into and out of the venue. Masks are mandatory. And, sadly, there will be no rushing to the edge of the stage to dance to the. You mostly have to stay in the confines of your pod space.
But after watching both ticket sales and the reactions of our small, "family and friends" audience two nights ago I think there is so much pent up demand just to see good, live performances that people are happy to put up with any of the small inconveniences foisted upon them by a need (and desire) for group safety.
Each week has a different theme with different performers. This week Matt and Jill sing Broadway Show tunes, backed by a small band. Next week it will be Songs from the 70's. The following week will be Motown and the final week will feature Chanel who will show off the "Tina Turner" performance that won her the starring role of "Tina" in a famous, West End, London production. Shows run Weds. through Sunday. While we aren't going to have anywhere near the 400 person capacity of Zach's interior seating the theater will play host to about 120 people per evening, the production costs are much, much lower than those of a conventional stage show and the theater is able to keep functioning and paying staff and performers. It's a really nice solution. And since the weather people suggest that it will be in the low 70's for the rest of this week it's a perfect time to spend an evening on the plaza with a glass of wine and some great music. 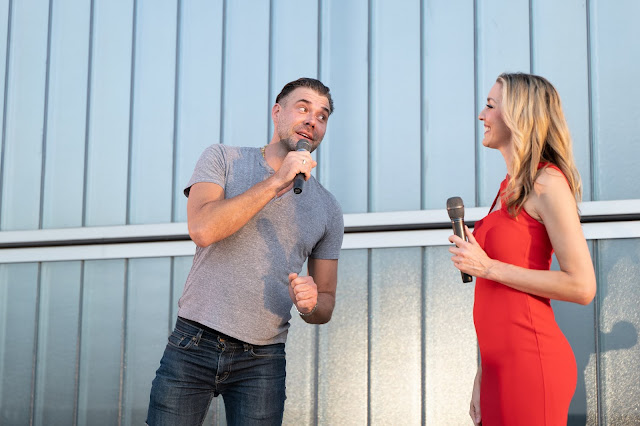 A "day before opening" rehearsal. Matt and Jill have been doing a "creative pod"
to ensure each other's safety at performances. 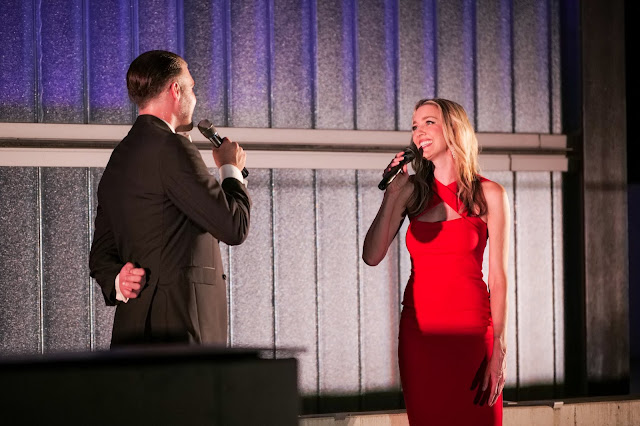 Matt and Jill in performance at tech rehearsal.
I have two jobs for each show. I'll be there for the first show of each week's run to make marketing photos (and photos for the theater's archives) from a position that we just finalized in a strategy session yesterday. We tried a location on Wednesday evening but switched to a new spot yesterday afternoon. I'm using two cameras, shooting with a 70-200mm on one camera and a 24-70mm f2.8 with the second camera. The lighting is not as bright as our usual stage shows so we're working at 1/250th of a second, f4.0 at 4,000 ISO. We could not have used this kind of ISO ten years ago but it's now practically a new, low light normal with the Panasonic S1 cameras. Whatever noise you see in examining the files here was exacerbated by my half stop underexposure and then the lifting of shadows in post production. Sorry, it happens. I haven't hit the files with any noise reduction but I'm sure I can clean up a little noise in the shadows without breaking a sweat.
The big challenges will come each Saturday as we do a three camera video set up.
I'll be in one set position with an S1H camera shooting 4K video. I'm not depending on the continuous AF of the camera so I'll have an Atomos Ninja V monitor on top of the camera cage so I can see the bigger image and also so I can punch in 2X while recording to fine tune focus. It's a really nice feature of the Ninja. I'll have that camera on a tripod with a fluid head so I can pan with the two actors as they move from the stage in front of the theater to the long concrete wall and walk way about 50 feet to the right.
Since my longest lens in the 70-200mm I'll take advantage of the ability of the S1 series cameras to shoot in full frame, APS-C or pixel-to-pixel mode and set it to shooting in APS-C which will give me something approximating 300mm on the long end. Using the lens like that will give me a great range for shots of two people together or waist up tight shots of the individual actors. Works well. No light lost either.
I'll use the Panasonic audio interface to pull in sound from the sound engineer's board since the interface has settings for "line in."
The second camera will be an unmanned camera right in front of the front door stage. Normally we don't do "un-manned" cameras for theater work because the lighting intensity changes all the time and you'd end up with tons of under and over exposed footage. But since the lighting team is small the stage lights are static for this set of performances. That means I can set up a camera, set the exposure and color balance and start it running five minutes before curtain and then not think about it again until the end.
We'll make that camera an S1 and outfit it with the 24-70mm f2.8 S-Pro lens.
The third camera will also be un-manned and will sit in front of what's quickly being called "the second stage." It's a long wall with a walkway on top. The artistic director originally created the concerts with just the one front stage but an hour with very little movement, no props and no stage settings gets pretty visually boring and that gave birth to the idea of using the second, contiguous space.
We'll set up a wide shot for that space using the GH5 coupled with a 12mm wide angle lens and let that one just roll as well. To access that camera for changes we'd have to walk right in front of the audience and that's just not a good look. Fortunately the GH5 will run for over two hours on one battery and get me something like an hour and forty five minutes on a 128 GB SD card. We only need about an hour and ten minutes. 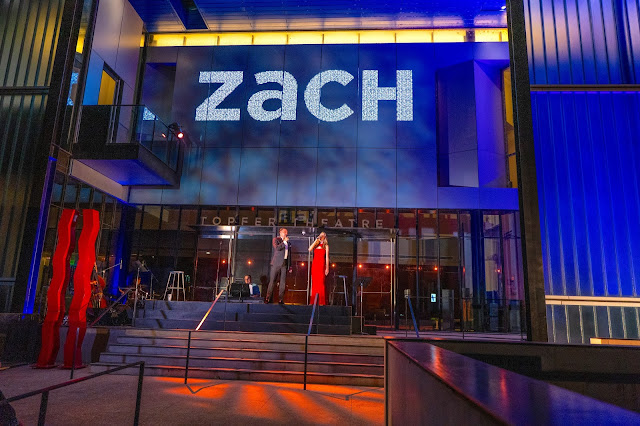 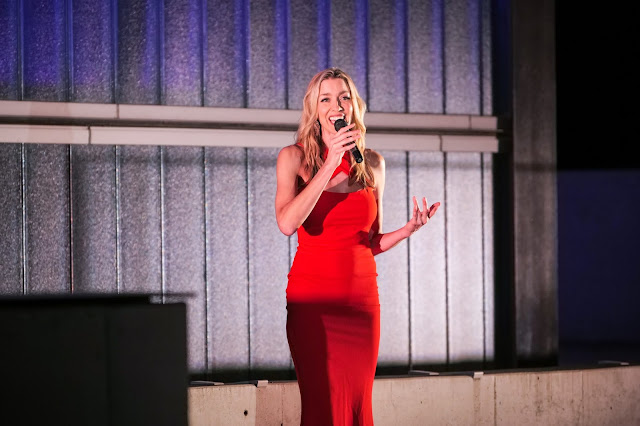 I'm so happy that I get to shoot all this but that I don't have to edit any of it. The files go straight to the theater's in-house editor and he can decide how to cut the whole thing together.

A quick explanation of why I am happy to pay $1800 and more for some of the Panasonic S-Pro lenses. Since we're working in low light on projects like this one I seem to end up shooting a lot of stuff with my lenses at their longer settings; and also set to their maximum apertures. In the case of the 70-200mm f4.0 I find myself shooting at f4.0 for most shows. If these were like lenses from the past I'd be hesitant to work at such a wide aperture but it seems that Panasonic are taking their lens design cues from Leica. The prevailing philosophy seems to center around making lenses that are so high performing at their maximum apertures that there is little to be gained from stopping down other than to increase depth of field.

I surfed through 300+ handheld images, shot at the long end of the 70-200mm, with the f-stop at its widest and the lens is sharp and contrasty at those settings.

Same with the 24-70mm which I use a lot at the 24mm focal length, also wide open. They work well and deliver very sharp files. Sharper than the images I got from nearly all previous systems. Nice.

Posted by Kirk, Photographer/Writer at 10:32 4 comments: