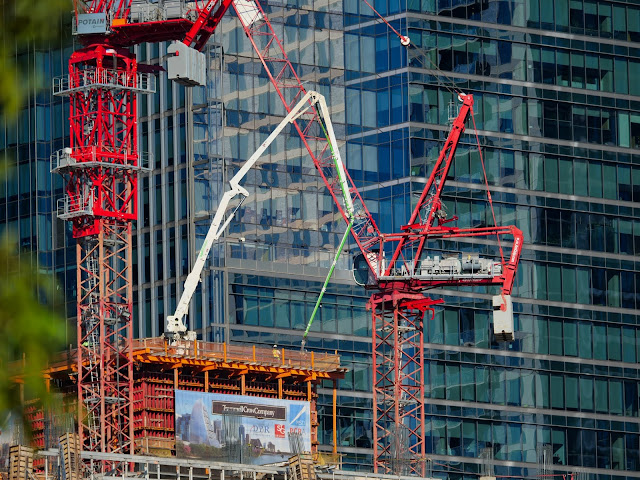 I tried to work with an older, used lens to get both a long reach and adequate sharpness. It was the Panasonic Lumix 45-200mm lens. It was clearly designed for a time in the camera universe when 10 megapixels was hot shit and lens technology followed suit. I guess the designers couldn't imagine a time in which 20 megapixels would be baseline normal. The lens was okay at f8.0 but who wants a slow, single aperture lens?
I shot with the used lens at an outdoor concert on Wednesday and felt the need to return it to my local, bricks-and-mortar retailer this morning. They understood and cheerfully refunded my purchase. I think that was a good move on their part because I was in yesterday dropping $1500 on a much better lens. It's the lens I should have bought in the first place. It's the Panasonic/Leica 50-200mm f2.8-f4.0.
But before I got all cozy with the 50-200mm I needed to take it out for some exercise and make sure that it's really the improvement I imagined it would be. I put it on the front of a G9 camera body and headed out for a late afternoon walk through a sun-drenched city that was settling in to Friday afternoon with clear, bright skies and high temperatures around 70°.
My big use for the lens is for all those times when I have to be in a stationary position but need to cover a long range populated with moving actors and singers. My 70-200mm S-Pro lens is right on the cusp of being highly useful when used in an APS-C mode, which gives me an equivalent focal length (compared to full frame cameras) of 300mm. But I found myself consistently wanting the flexibility of that last 100mm of stretch.
Here's what B&H Photo has to say about the new, 50-200mm f2.8-4.0 lens (a quick and dirty way to cover the specs...):

"the Leica DG Vario-Elmarit 50-200mm f/2.8-4 ASPH. POWER O.I.S. Lens from Panasonic is a 100-400mm equivalent zoom designed in collaboration with Leica for Micro Four Thirds cameras. The long reach is complemented by a bright f/2.8-4 maximum aperture range, which benefits working in low-light conditions and also affords control over depth of field for isolating subjects. The optical design incorporates several low dispersion elements, two aspherical elements, and an ultra-high refractive index element to control both chromatic and spherical aberrations for improved clarity and sharpness. A Nano Surface Coating has also been applied to limit flare and ghosting for increased contrast and color fidelity when working in strong lighting conditions.

Benefitting both stills shooting and video recording, a 240 fps high-speed AF motor offers quick, quiet, and precise autofocus performance. Also, a POWER Optical Image Stabilizer will compensate for camera shake and works with Panasonic's Dual I.S. and Dual I.S. 2.0 in-camera stabilization functions to minimize the appearance of camera shake. Additionally, the physical design of the lens is dust- and moisture-resistant, as well as freeze-proof, for use in inclement shooting conditions.

With a 100-400mm equivalent focal length range on Micro Four Thirds cameras, this telephoto prime is well suited to working with distant subject matter.
Bright f/2.8-4 maximum aperture range excels when working in difficult lighting conditions and provides increased control over depth of field.
Two ultra extra-low dispersion elements and two extra-low dispersion elements minimize various aberrations in order to produce a high degree of clarity, sharpness, and color accuracy.
Two aspherical elements and one ultra high refractive index element help to reduce distortion and spherical aberrations for improved sharpness and accurate rendering throughout the zoom range.
Nano Surface Coating has been applied to individual elements to reduce flare and ghosting for improved contrast and color neutrality.
POWER Optical Image Stabilizer minimizes the appearance of camera shake for sharper handheld shooting, and also supports the Dual I.S. and Dual I.S. 2.0 functions for increased stabilization performance.
A 240 fps AF motor offers fast, precise, and near-silent focusing performance to benefit both stills shooting and video recording applications.
Splash, dust, and freezeproof design benefits working in inclement weather conditions down to -14°F."
I want it for two reasons. First, I want to use the lens when I do still photography of shows where I can't approach the stage so I can get tighter shots on individual performers. Secondly, I want the additional reach so I can pan with moving performers as they move from one stage that's 50 feet away to another stage that's 70 feet away. But...I want the images to be sharp and the image stabilization to work almost as well as a current gimbal.
On my walk today I concentrated on objects that I could shoot at the full 400mm extension of the lens while having the aperture set at f4.0. The images above and below are the result. I'm happy with the optical performance of the lens but I need to spend more time tomorrow practicing the manual focusing of the lens. That will be critical for my video use.
So far, I'm finding the lens to be very sharp; even wide open. At the long end it does not lose sharpness or contrast like so many lesser lenses. If it passes my manual focusing tests I will have found my new, favorite long lens. It will also be part of my traveling kit.
I learned when I was in Iceland in 2018 just how great the G9 and some of the m4:3 lenses really are. My "small camera" kit now includes the G9 along with the 12-60mm Panasonic/Leica lens and, hopefully, this lens as well. I bring along a GH5 as a back-up/companion body. Both cameras take the same battery and both, obviously, take the same lenses. It's all a match made in heaven.
Browse through the photos and let me know what you think. The adore-or-return test starts tomorrow at sundown on the plaza at Zach Theatre. I'll post more after that. 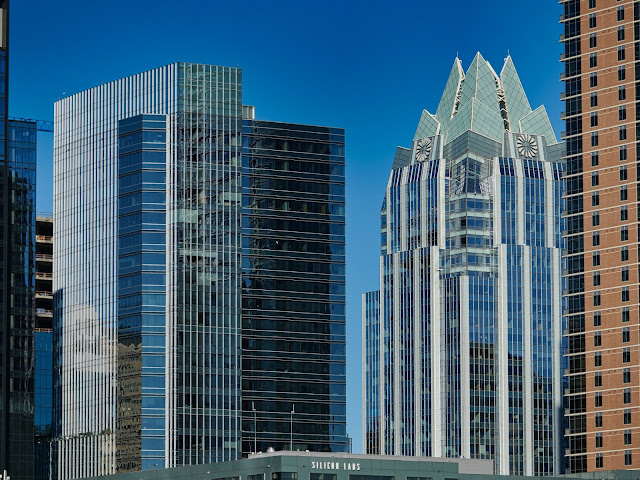 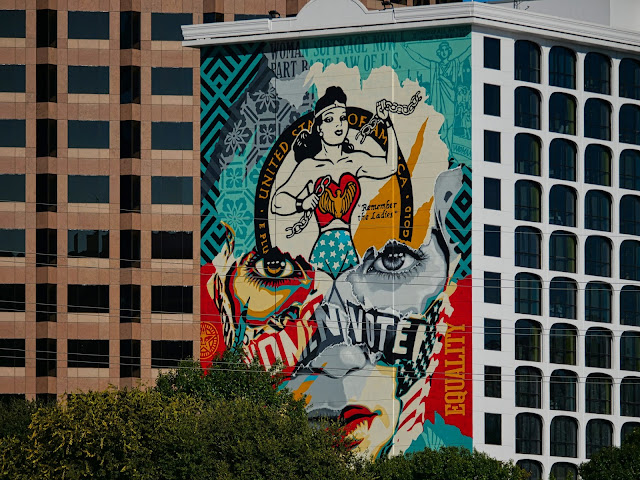 From all the way across the wide river. 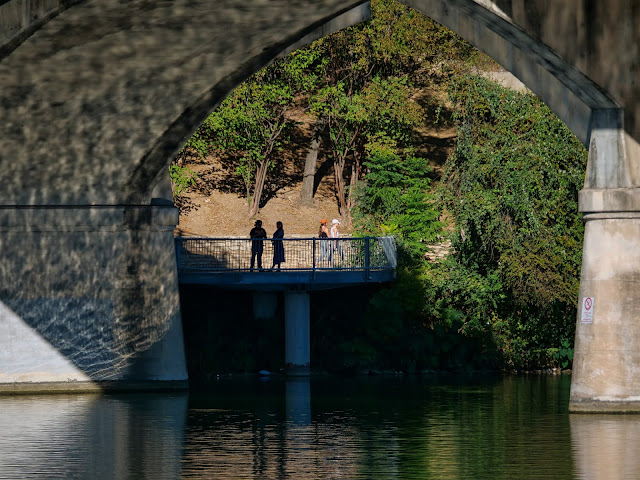 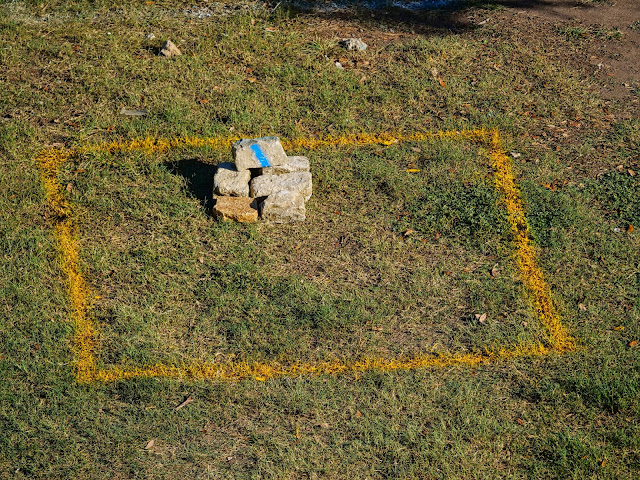 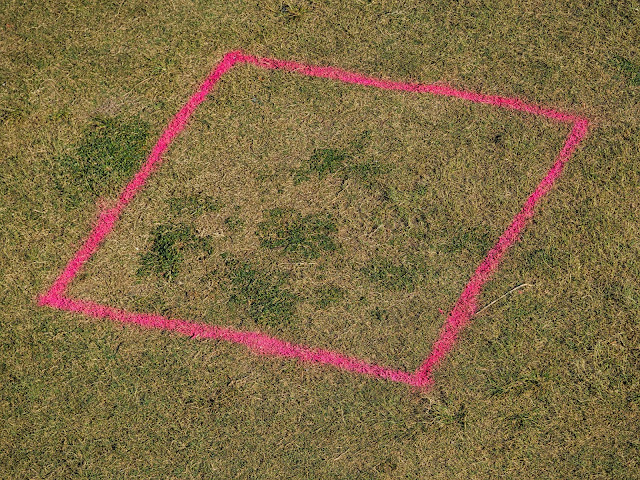 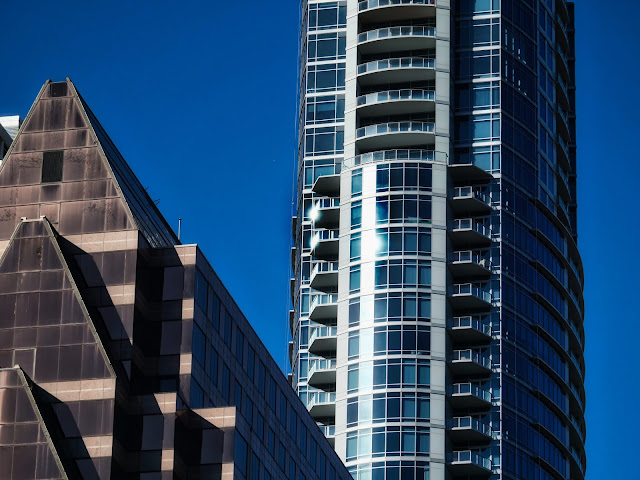 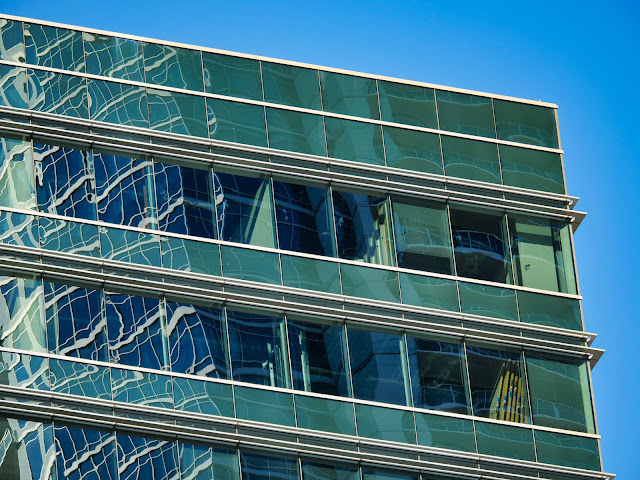 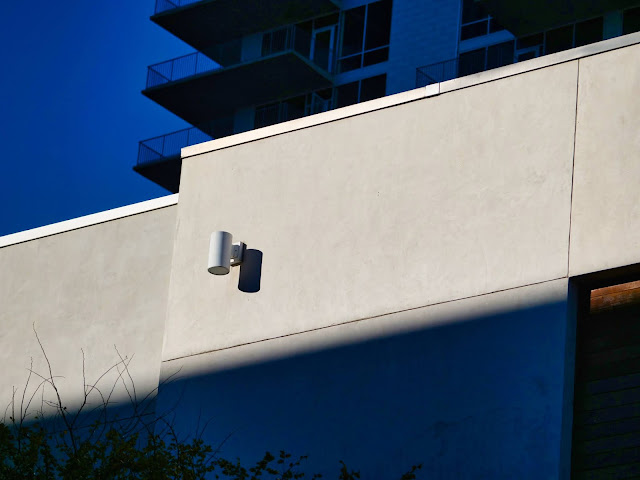 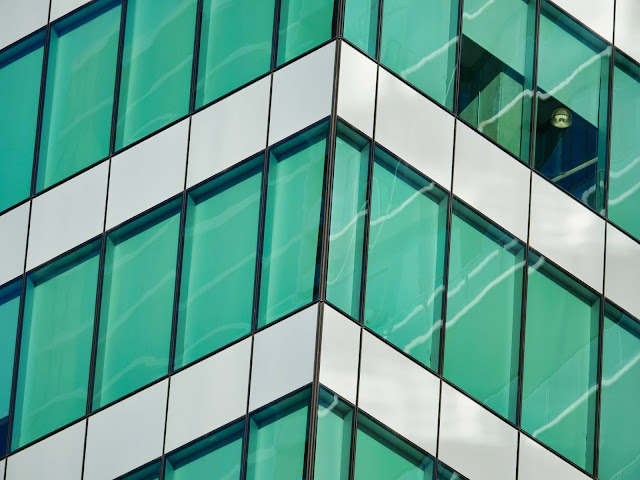 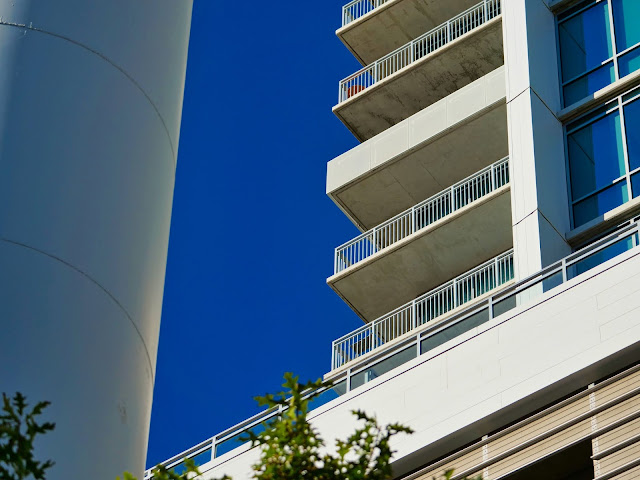 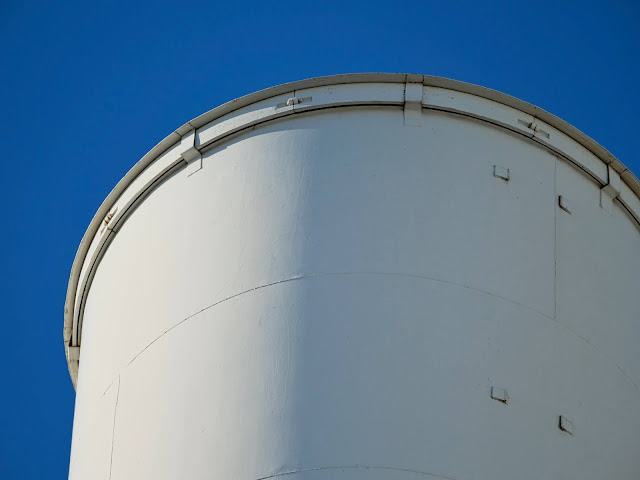 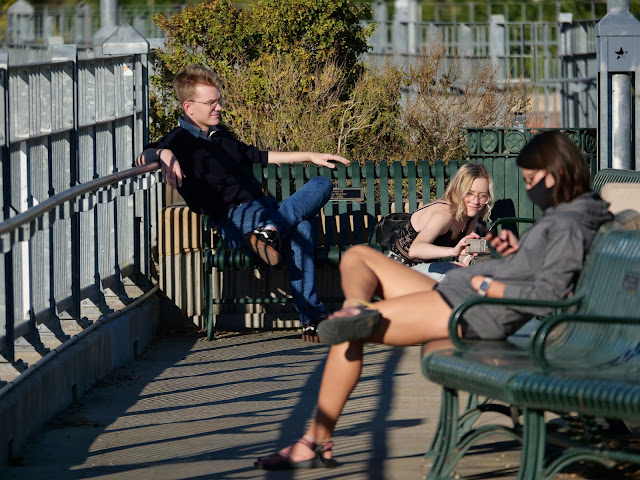 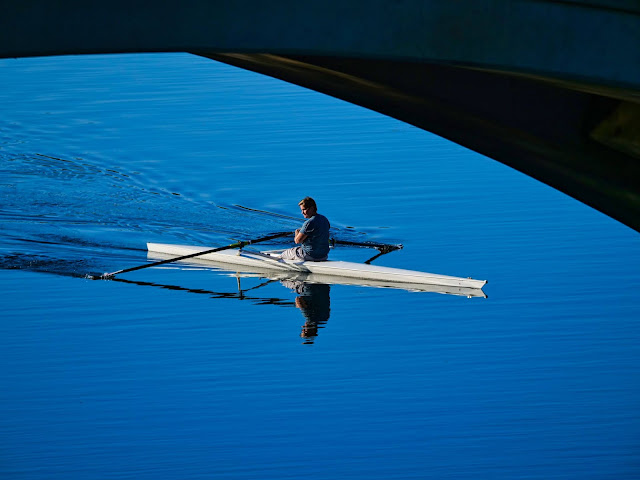 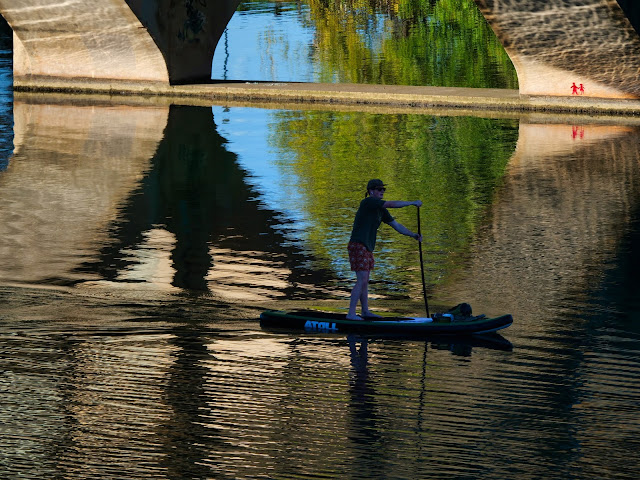 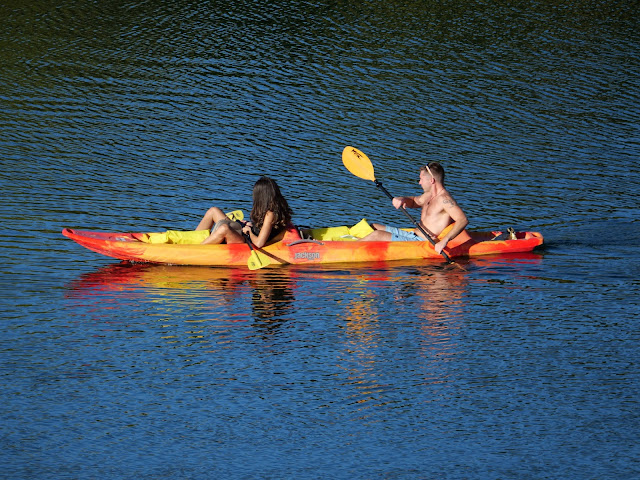 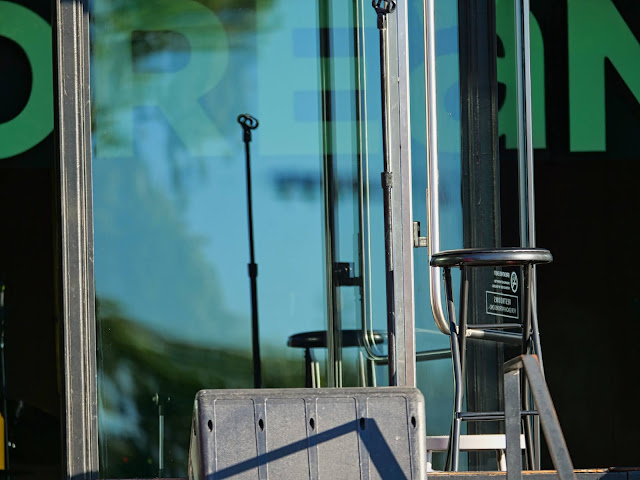 A quick test shot at the theater. Just making sure it's the right combination for tomorrow's video.
Posted by Kirk, Photographer/Writer at 20:46 13 comments:

Who is my favorite YouTube personality when it comes to learning technical stuff about video?

That would be Gerald Undone. He's smart, fun, informed and makes great videos about lots of different technical stuff in which I am keenly interesting.

Need to know the best way to set up an Atomos Ninja V monitor/recorder? He's on it.

A good, deep dive into LED lights for video? Saw it. Liked it and made a buying decision based on the info. Guess what? That light is now one of my favorites.

He won't waste your time with a lot of useless fluff in the openers and he's face paced. Best of all? A table of contents by time. Go straight to what you think you need to know...

Disclaimer: I have no association with Mr. Undone. No affiliation whatsoever. Just a fan who has learned a great deal from his content.

Posted by Kirk, Photographer/Writer at 11:24 5 comments: