A photo at the Seaholm Power Plant done with the Panasonic 20-60mm lens and the Sigma fp. 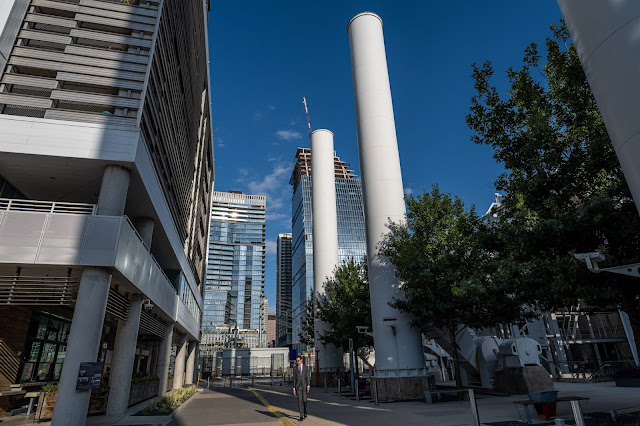 heading out.
I had a lot to do yesterday. I was wrapping up the backend of a multi-day project while at the same time cancelling an upcoming assignment while trying to find a competent and personal replacement so as not to leave the client in the lurch. But by the end of the day I was ready to grab a camera and go for a walk.

I've recently circled back to the Sigma fp so I put the loupe on the back of that camera and put the Panasonic 20-60mm lens on the front. It's a good combination and I'm getting much more fluent with the huge loupe. I don't have a strap on this camera so when I walk with it I just carry it in one hand or the other.

I don't know if it's the camera or the lens, or both, but all the images I shot came out wildly sharp and very saturated. They looked modern but beautiful.  It's a great combination for shooting in good light. And the latest upgrade for the Sigma fp makes the cameras exposure, white balance and S-AF performance very solid.

Now that a newer model has come out I'm seeing used Sigma fps for as low as $1200 when preserved in mint condition. Not a bad price for a tiny, full frame camera that is largely heat proof and also does raw, 12 bit video. 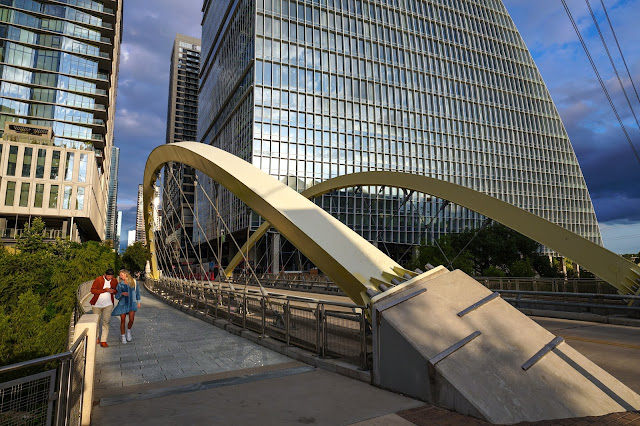 Coming back.
Posted by Kirk Tuck, Photographer/Writer at 16:21 4 comments:

off topic: Why you are an evil and reprehensible person if you have not gotten fully vaccinated (excepting mitigating medical issues) in the U.S. by this point in time. Whatever your ideological excuse for not getting vaccinated is, you suck.

A blank photo.
I swam with my favorite pulmonologist this morning. I asked her how things were going at work. I thought she was going to explode. We have great hospitals here in central Texas and as of early this morning all of them, ALL OF THEM are filled with Anti-Vaxxers who presumed the rest of us would take care of business so they could skate from any responsibility that comes with enjoying the features and security of a functioning society. She explained to me that what this meant for all of us who did our duty, made smart decisions, were unswayed by brainwashing and political manipulation, and got our vaccinations, is that if you or a family member have a car accident, heart attack, a bad fall, a stroke, fall off a ladder and land on your head, etc. you will most likely NOT be able to access emergency room care within the city limits of Austin. There are NO more ICU beds. If you go in with an emergency you'll likely spend hours (days?) on a gurney in the halls of a hospital surrounded by dozens and dozens of people with full blown Covid-19 infections; the vast majority of which were preventable.

I asked the doctor (who would be going in for her 9th shift this week, right after swim practice) what the most common excuse for not being vaccinated was. She said people told her they were afraid of the vaccines because they haven't been fully approved by the FDA. She minces no words and tells them that the Remdesivir and Monoclonal Antibody therapies that they and their families are begging for are also only approved for emergency use by the FDA at this time. Just like the vaccines. But by the time it sinks in that they've fucked themselves over the patients are begging for EUA drugs of any kind. Funny how the ideology disappears when they realize this pandemic really is about life and death. Their life or death.

Her advice to me? Don't get sick. Don't get hurt. Don't take risks. And never, ever, ever trust far right wing politicians.... They'll kill you for a chance to grab power.  That's the biggest risk. That's why we're at 50% immunizations nationally instead of 90%. That's why so many people are dying.

My pulmonologist friend is pretty darn smart and she sees first hand, in what is the current, most popular city in the USA, and one of the most affluent, the risks and the damage of willful ignorance. I think I'll take her advice.

I've given up having any patience with willfully stupid people during this pandemic. If that makes you all pissy and upset then find some fire-breathing, demagogic fascist who writes an interesting photo blog and enjoy. Just don't expect "equal time" or "what about-ism" here.

Added: We have a governor here in Texas who is willfully choosing to pander to a demographic of the American Taliban, aka: Polically Motivated Vax Deniers. Even in the face of overwhelming evidence that the proclamations and rules he is promulgating are extremely dangerous to public health and safety. He's essentially making it easer and easier for Covid to kill far more Texans. So much death could be prevented just with mask mandates and requirements for social distancing. There is so much hypocrisy. Gov. Abbott makes lofty statements about personal responsibility while ignoring that it's legal to pass laws that protect everyone. It's why we have seat belt laws and laws against drunk driving. Why it's illegal to pour toxic waste into our communal drinking water, etc.

He has now crossed over the line. He needs to be tried (seriously) for crimes against humanity. He is willingly creating a wholesale humanitarian disaster so he can get re-elected and lower taxes for the very wealthiest people in Texas and he's doing this by manipulating a poorly educated base of voters into taking actions in direct offense to their own well being.

The people of Texas need to take legal action to stop his gross negligence and to hold him personally accountable for the carnage he is currently enabling.

Austin just used up its last ICU bed. Now we're about to queue up chaos. Thought and Prayers? What an asshole.

Posted by Kirk Tuck, Photographer/Writer at 13:03 No comments: