The Sigma fp and image stabilization. My take. 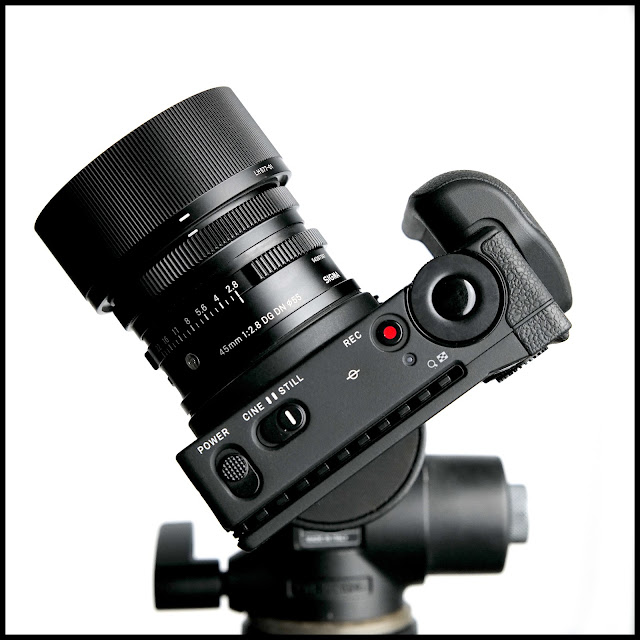 Panasonic shocked the small format film-maker's world a few years back. They had successfully made the  GH5 camera with very good in-body image stabilization and then a little while later released a version they called the GH5S with a lower resolution sensor and.....no image stabilization. The usual forum dwellers were shocked, dismayed and furious. They just couldn't understand that most camera design is a mess of compromises and that having a moving sensor is one of those "features" that could actually cause a drop in video image quality and reliability. Many people, new to photography, had  only known cameras with image stabilization or cameras made to be used with lenses that were stabilized. Amateurs shunned the GH5S but professional film-makers rushed to buy them as almost everyone using a camera for handheld video were using their cameras in conjunction with gimbals. And sliders were another popular stabilizing tool for camera movement.

In creating cameras for still imaging the moving sensor is less of a problem but all added complexity diminishes reliability and adds to the cost of making the camera. And there are a number of photographers still who believe that I.S. can cause imaging artifacts in situations which would benefit most from the added feature.

I'm not going to take sides on the pros or cons of the camera technology because several of the cameras (five or them?) I routinely use don't have image stabilization (per se) and I find them to be exceptionally good cameras which deliver great results for me. As long as I use them correctly. So let's talk about adapting to a working methodology in which we make the assumption that we don't need or won't be able to access image stabilization.

I first came to grips with the idea of shooting without I.S. when I bought a pair of Leica SL cameras. It is a heavy and robust mirrorless camera which is built to take a lot of abuse but doesn't have all the bells and whistles of other more feature laden cameras. I wondered how I would fare with a "crippled" modern camera after having shot with I.S. enabled cameras for a number of years prior.

There are several things that come to mind in using those Leica cameras and the Sigma fp. First, and especially in the case of the Leicas, the camera has a lot of mass. It's built with a selection of dense materials and most of the lenses for it are large and also have a good deal of mass. This works to provide more stability to the system than a lighter camera. A dense object at rest...etc.

When I shoot with these cameras I am mostly using lenses in the range of 24-100mm. I tend to use the old formula for dealing with camera motion and try to set a shutter speed that's twice the focal length of the lens I've chosen. This is for stopping photographer induced camera motion NOT subject motion. So, if I'm using a 50mm lens (quite likely) I try not to set a shutter speed lower than 1/100th of a second. In reality, something like 1/125th. This goes a long way toward preventing the effects of camera shake from intruding into the photograph.

In a normal, sunny, exterior day I tend to set even higher shutter speeds since I have that option at my fingertips. I also make good use of the Auto-ISO functionality by setting a high minimum shutter speed when the lighting is good. When I ventured out last weekend I probably set the Auto-ISO shutter speed minimum to 1/320th of a second and set the camera to choose between ISO 50 and ISO 400. With my regular choice of apertures I found the camera stayed in the sweet spot of shooting around ISO 100 with shutter speed vacillating between the 1/320th and 1/1,000th. And photo lore among professional photographers (not verified...) is that at any shutter speed over 1/320th, with a normal range of lenses, renders the advantages of I.S. moot.

On this blog site you've seen hundreds of handheld samples with tons of detail and with good sharpness. All from cameras set up as I've described it above.

The Sigma fp is an exceptional camera with which to shoot without needing I.S. The secret is the very high performance of the imaging sensor at very high ISOs. The fp delivers files for me at ISO 12,500 or even 25,000 that look as good (noise wise) as ISO 3200 files from a Leica SL or 1600 from a Leica SL2.

Comparing the fp with my favorite SL, and being conservative, I'd say that the fp is easily two stops cleaner (less shadow noise) than the Leica. This means I can bump up my ISO by two stops with no loss of image quality. If I opt to give those two stops to the shutter speed settings then I am essentially getting two stops more of vibration reduction in my handholding of the camera.

Looking at old files from the first decade of this century I can say that the Sigma fp is as good at ISO 12500 as my full frame Nikon D800 camera was at 800 ISO. In effect, this difference gives me four stops of implied image stabilization in comparison. And at the time the D800 was in heavy use that camera and many other popular models did not have in-body image stabilization either.

But let's go a little further. Most systems that aren't featuring in-body correction of photographer frailty have lenses that are stabilized. For the Sigma fp I have the option of using two different zoom lenses that  feature I.S.  The Leica 24-90 Vario-Elmarit and the Panasonic 24-105mm S lens. Both add at least three stops of stabilization to the mix. I also have the Sigma Art series 70mm Macro lens which has lens based stabilization.

Like many others I do prefer to shoot more often with single focal length lenses than with zooms. Especially for personal work. But even there I find working with non-stabilized cameras easy. Most of the optics we tend to buy these days are highly corrected and usable at every aperture. I find myself shooting lots of stuff at f2.8 and sometimes even faster apertures. The wider apertures allow for faster shutter speeds which is an instant substitute for I.S.

Taken altogether a camera like the Sigma fp doesn't need to apologize for a lack of sensor based I.S. In fact, I would argue that, as with the GH5S, the lack of it enables a more stable platform, delivers a product with greater reliability, and compensates when compared to other cameras, with stellar high ISO capabilities. The unmoving sensor also is the basis of the electronic only shutter so you've basically eliminated two points of mechanical complexity and that can only serve to make the camera much more reliable over time.

The one downside I can think of from the absence of the feature is the view on the LCD with longer lenses. The lowered stability of the image in the finder, multiplied/magnified by longer focal lengths, makes accurate handheld composition harder. The images get jittery.  But....my only "long" lens is the Panasonic 70-200mm f4.0 S-Pro which as its own built in stabilization. Problem solved.

Finally, the wider you like to shoot (lens wise) the less need there is for artificial image stabilization. Select your shutter speeds wisely, practice good form and you can work miracles without that crutch.

Finally, finally, finally. I was happy for Mike Johnston when I read he just bought the Sigma fp, lens and hood. I think he's going to have a blast with it and, in some measure, this post was written in response to the folks who critiqued his lack of editorial continuity for once proclaiming to want or need I.S. and now buying a camera in spite of image stabilization not being one of the features. The camera world constantly changes. And we are allowed also to change our personal priorities. I think Mike can do the math. If he hasn't already he will quickly discover the joys of a camera that delivers stellar ISO performance and absolutely no self-inflicted mechanical vibration. It's a game changer...not a deal-breaker.

Posted by Kirk, Photographer/Writer at 11:40 11 comments: