Gearing up a bit for a video project on the calendar a couple weeks from now... 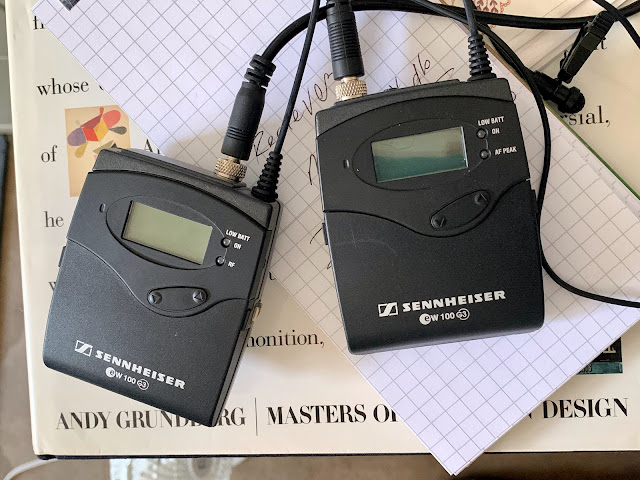 I used to put stuff off till the last minute. If I knew a video shoot was coming up I figured I could get around to gearing up or replacing older and damaged gear the week before the engagement and we'd be in good shape. Then came the "supply chain" issues. You know, as in you've got cash money to buy a car but there are no cars to buy? Or you've finally decided to order that new camera only to find it's back-ordered, stuck in transit, etc. and you just can't have it now. Bummer. And sometimes it affects jobs you've agreed to do. You might have to give up on using a certain microphone or lens and try to make do with something less.

We committed to do a testimonial video in about a week and a half and I decided to get ahead of the disappointment wave and make sure I had the stuff I needed to do the job well, in hand and ready to go. It's been a while since I did an interview-style video assignment. I knew I had enough camera gear, lenses, mixers, and tripods to outfit a small film production company but I'm always extra sensitive to audio gear. I like what I like to work with and hate having to sub in unfamiliar products in a pinch.

I remembered loaning one of my favorite lav microphones to a friend who accidentally trashed my Sennheiser MKE II Gold Omni microphone. He paid me for it and I forgot all about it because with Covid raging we just weren't doing many new interviews. There was no pressing need to replace that microphone in the moment. I also remember that the last time we did a big interview intensive project (nearly a week of shooting) I lost a couple of tiny "dead cat" windscreens for my collection of lavaliere microphones and a couple was all I had. So, in fact, I was down to zero micro dead cats.

Back when I was teaching classes in commercial photography at the University of Texas College of Fine Arts I remember telling students time and time again that a professional shows up ready. Ready with gear. Ready with a plan. Ready with extra gear in case something goes wrong. My students probably thought I was nuts but I was trying to save them from failure. And it's been a work habit ever since.

Before I started down the long road to photography I was more interested in audio gear. At one point in my life I wanted to go into electrical engineering in order to design amplifiers, pre-amps, high fidelity wireless systems, etc. It was a fun hobby but I could see, after a couple of internships with big semi-conductor companies, that the reality of that kind of work was much different from my fantasy of it. Big companies all expect one to show up on a regular basis and actually get work done. They expect results. The best dodge I could find instead was advertising and then photography. But I never lost my interest in audio equipment and I'm generally always appreciative of good engineering.

So, when I head out the door to do video I feel pretty confident about the camera work but I'm always much more concerned about the quality of the audio we need to get. In my mind, and in my experience, great audio is always the most important component of a video project. You might have great footage of beautiful stuff but if you are including interviews and the sound is funky you lost the game.

I bought two sets of Sennheiser EW 100 wireless microphone systems back in 2012. That was ten years ago. I bought them because at the time they were the reputable standard. Not as luxe as the Lectrosonic gear but still good, solid gear for the kinds of productions I do. I'm usually just using one set and keeping the second set handy as a redundant back-up. On a shoot I'll have both pairs set up identically so that if one unexpectedly dies I can quickly replace them without having to re-calibrate, set levels and pair them again while a client is waiting for me.

I've used the EW 100s extensively over the last ten years. They are reliable and consistent. Each set came with a Sennheiser MK 2 mic. I later bought the upgraded MKE II versions which are sonically supposed to be "better" but I think the originals are 95% there already. Certainly good enough for spoken word interviews. But I went ahead today and ordered another of the  MKE II Gold version and also a packet of "furrys" for the lavalieres. We're going to be filming outside and I want to be ready to step in and dress up the mics with little furry objects to kill the wind noise; if necessary. (These are not really made from dead cats. They are generally synthetic fabric fuzzy constructions that kill wind noise...).

Today was test day. I tested both pairs of receivers and transmitters and matched them all to the same pairing frequencies. I tested the microphones and both sets of headphones (weak link is almost always the cords) and made sure I have ample supplies of Eneloop Pro double "A" batteries ready to go.  I tested the gear on all three of the cameras I have in mind to shoot with. So far so good.

The new microphone and replacement furrys are in stock and shipping. They'll be here a week ahead of the project date. Looks like we're good to go here.

I also wanted to talk about one of the things I like about my Sennheiser wireless mic gear: I love that both units take standard, widely available, double "A" batteries. This is one area in which I do not like built-in, non-removable, rechargeable, proprietary batteries. If you screw up on charging them you can't easily fix your faux pas in the field. They are remorseless. Those proprietary batteries live to screw with you. If conventional, removable batteries decide to give up the ghost it's an easy and quick replacement. And the gear is set up to show an accurate battery level with conventional batteries. Built ins? You're on your own....

So, robust gear. Easy to work with. Easy to set up. Easy to get power. Industry standard. I know the Rode Go's and the DJI's are much cheaper but I also don't think wireless mics are based on such ever changing and cutting edge technology that the new models are important to keep chasing down. I'll stick with these until such a day as when I can justify a set of Lectrosonics and a bunch of Countryman microphones. Till then, do a sound check and watch your levels....

Posted by Kirk, Photographer/Writer at 13:53 8 comments: