Channeling my inner Garry Winogrand on the very same streets from which he harvested images while in Austin, Texas. 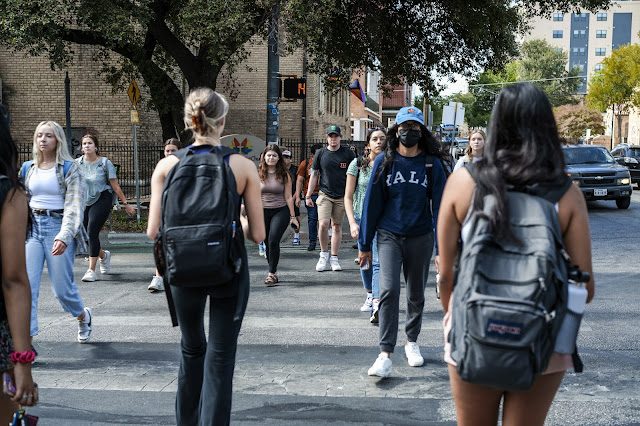 What did Garry Winogrand and Kirk Tuck have in common? They were both prowling around the UT Austin campus area with cameras between 1973 and 1978. They both were into high fidelity sound equipment and could both be found at a store called, Audio Concepts, located on the SW corner of campus. Winogrand was a frequent visitor to the store because he liked to come in and audition stereo gear he might be interested in buying and Tuck was there because, well, he worked at said store part time while going to school. He was working the job. Another similarity is that both of them (during different periods of time) taught in the Fine Arts College at UT. Oh....and also they shared a classroom one semester when Tuck was a student and Garry was his instructor.
After work or between classes most of us photo "enthusiasts" gravitated toward "the Drag", the main street that ran north and south along the west edge of campus. That was Guadalupe St. and right in the middle of the row of retail shops and buildings on the west side of the street was the UT Co-op which had a big camera department on the second floor. That's where I bought my Canon TX camera and my first 50mm lens. A few blocks away was the Dobie Mall. That's where Audio Concepts sat but more importantly that's where Capitol Camera was located while I was a student.  And Capitol Camera was, in the eyes of Austinites at the time, the ultimate camera store. You could buy everything from Leicas and Hasselblads to Rolleis and Nikons. And a lot more. That's where I bought my very first, brand new camera, a Canonet QL17 iii.
When we headed over to the Drag with our own cameras we would often see Garry wading through the crowds of students coursing down the sidewalks with a Leica M rangefinder camera over one shoulder and another one in his right hand, glasses pushed back on his head,  ready to pounce on any photographic opportunity --- which more often than not was some really cute co-ed in cut-off shorts walking along to class, etc.
It was fun to watch Garry work because he was oblivious to the annoyed stares and signs of disapproval from his targets. If they paid attention to him at all. He would have been in his 50s at the time. And I think it was easier for him to do his style of street photography back then than it would be for us to do the same now because back then about 25% of the students were also carrying their cameras around over one shoulder and, in general, it was a time of less cynicism or maybe just more innocence.
When I went to see the Laura Wilson show at the HRC on the UT campus last week  I walked a few blocks down from the HRC and crossed the street at the intersection of 22nd St. and Guadalupe St. It's been a while since I've been on campus during a busy day. But at this particular crosswalk the memory of watching Garry Winogrand in the same area, plying his art,  came back to me in a flash. It was the same kind of afternoon he would have loved to be out photographing on. A battered M camera with a 28mm and a bright line finder mounted in the shoe. I could re-see it all.  It was like magic for a moment. The memory.  And then the traffic light turned and it was all gone. 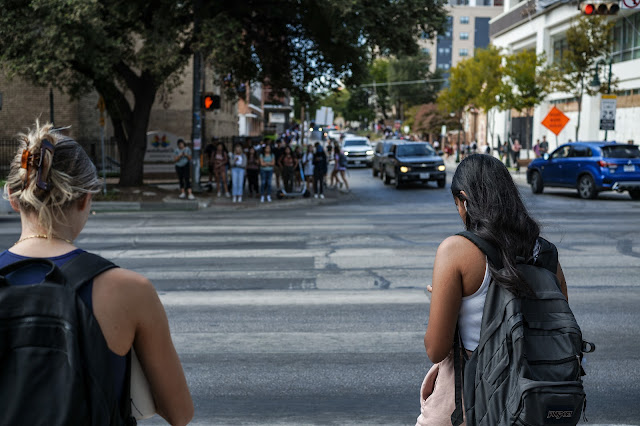 Posted by Kirk, Photographer/Writer at 11:57 7 comments: