From great eggs and biscuits to outer space within an hour. 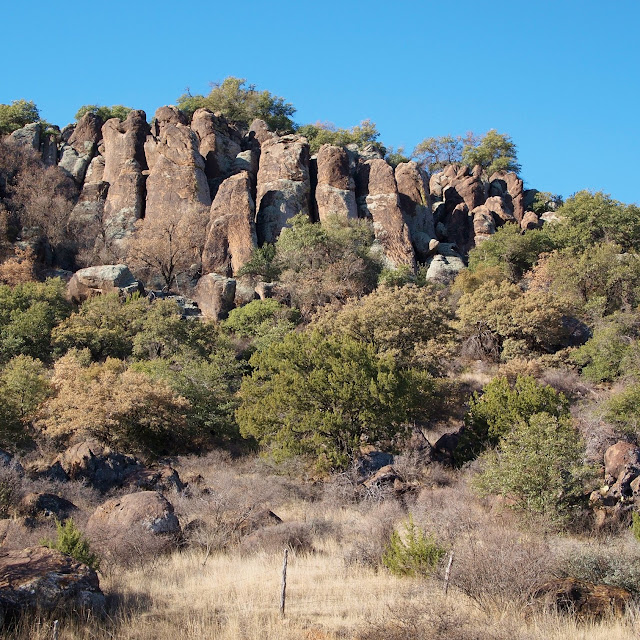 The continuing story of my short road trip to west Texas.  I left Ft. Davis shortly after breakfast and headed over to the Ft. Davis State Park.  Did the skyline road and then headed over the McDonald Observatory to see what was happening at the highest point in the Davis Mountains.  The observatory sits at just about seven thousand feet......  I saw a lot of cool rocks like the ones above and I tried my best to make images that were unique and different but I had to realize at some point that I'm not really a landscape photographer, so........... 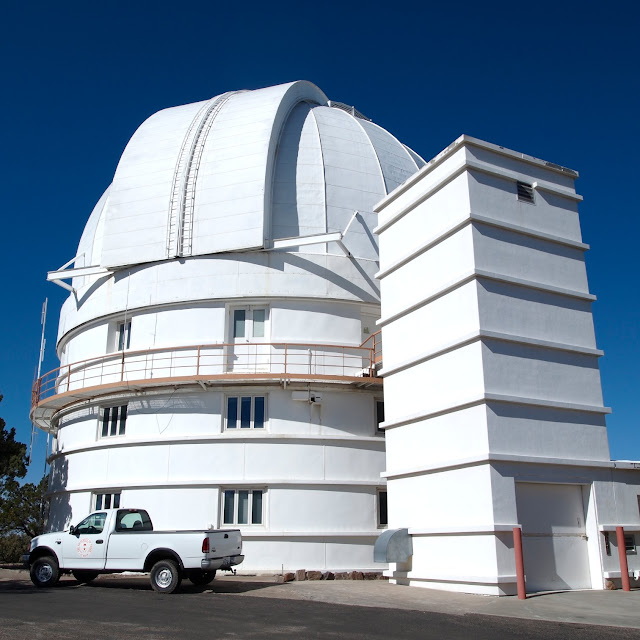 I tried my hand at buildings.  This is one of two observatories on the top of the mountain.  I was supposed to go to the visitor center and join a group tour but I'm pretty bad at following directions and even worse as a team player (pointed out by a disgruntled editor just last week....) so I went straight to the main observatory where I met the lead electrical engineer for the entire facility.  No joke,  I told him I wasn't into group tours.  He gave me a private tour.  We talked about the proprietary Kodak CCD sensor they use in the main telescope and how they cool the sensor with liquid nitrogen in order to reduce noise.  Now I'm carrying around a tank for the Olympus e1 and dousing the sensor just before I shoot in order to reduce noise.  When I have the sensor totally immersed the low noise performance of that old Kodak sensor makes the new Nikon D3s look like a Roy Lichtenstein print......(Just kidding.  No tank of liquid nitrogen for the e1 ---- yes for the telescope.) 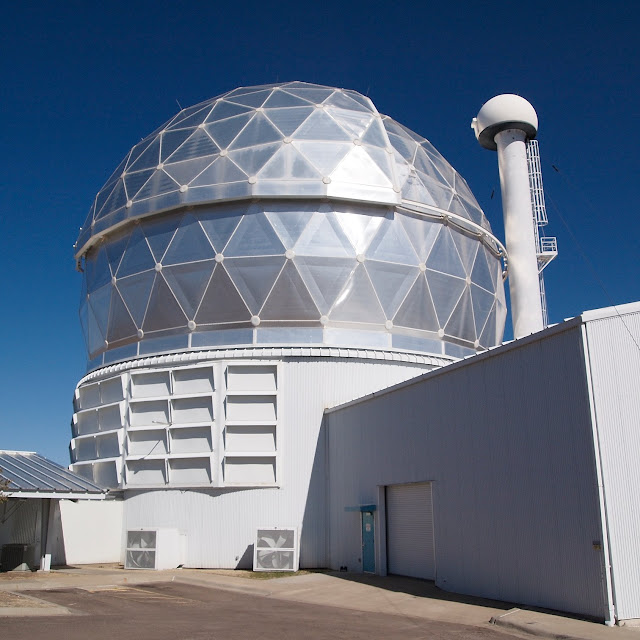 The main observatory which uses a Kodak chip (not kidding!) and the whole telescope assembly is cooled during the day to the temperature that is predicted for the night.  In this way they don't have to deal with the differing coefficients of metal and glass expansion or contraction which would alter the focal length and aspherical properties of the telescope's optics.

The silver dome houses a curved mirrored array that acts as the data collector.  It's a very cool looking building.  I imagine that people go in thinking that there's an eyepiece to look thru.  There isn't.  Here's what the business part of the telescope looks like: 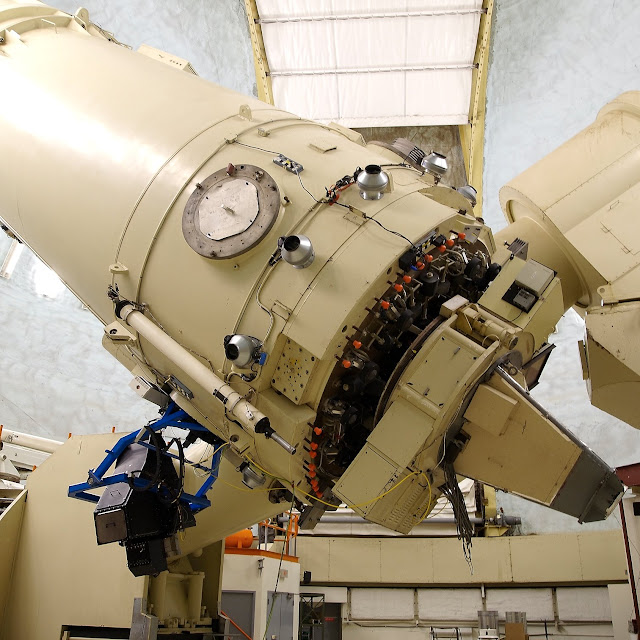 The fascinating thing about this image for me is the exif info.  This was shot with the EP-2 handheld at 1/3rd of a second.  Either I am as steady as a large block of ice or the IS in this camera really works.  (I paid full price for my own EP-2.  It is not a loaner.....).

The next shot is not nearly so impressive since it was shot a boring 1/6th of a second.  Unthinkable before IS in cameras. 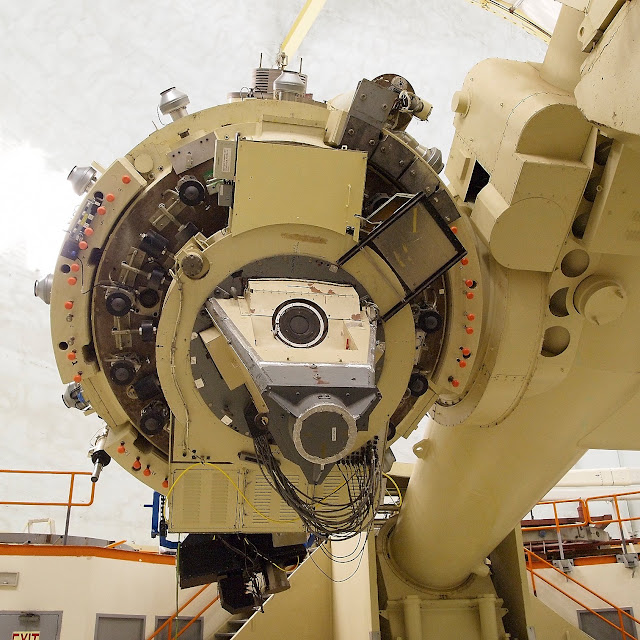 Love the way the exteriors look when you underexpose them with the 14-35 on the e30.  Makes me want to re-do my place with silver foil : 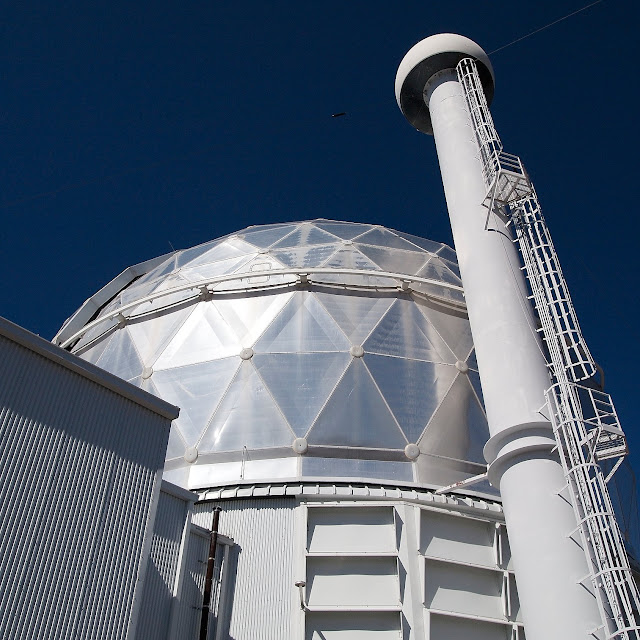 Well.  So much for cool science stuff.  A big "thank you!!!" to Hans Kreel for the personal tour.  Spectography rules!  And then back on the winding road to Marfa, home of Bridget and the Marfa Table restaurant. 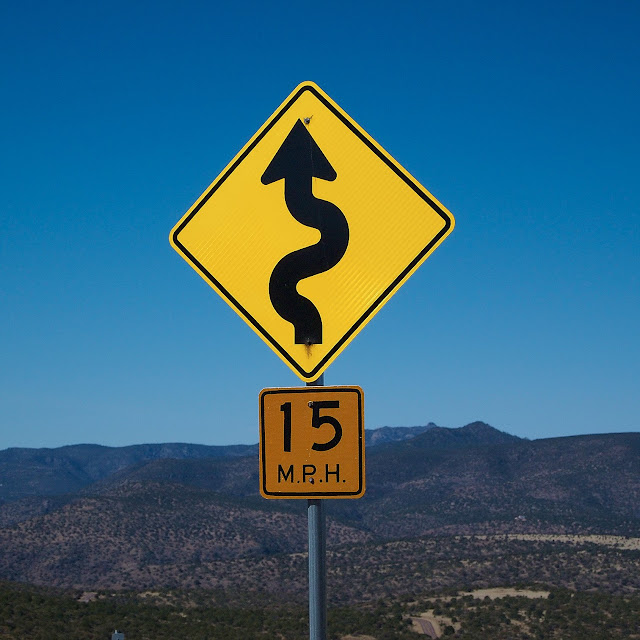 Camera notes:  After the first day I abandoned the Canon G10 and went straight for the EP-2 with a side of the e30 thrown in from time to time.  Here's why:  small. light.  good files.  fun to use.  great finder.  The downside:  you get around 300 shots per full battery charge.  Good thing I brought four batteries because the power was out at my friend's house.  But that's a story for later.........
Posted by Kirk Tuck, Photographer/Writer at 16:31

Great posts Kirk, but just so's you know, there is an eyepiece on that scope. It's right in front there! How did you miss that! ed

Nice shots, Kirk. My girlfriend's brother is doing his graduate program in astronomy at UT Austin. I wonder if he's been at this observatory. And great photos... especially those interior shots. They are excellent. Does the lightness of the E-P2 makes it easier to handhold with the IS on? The best I've done with my E-3 is 1/5.