A rather boring article about how I lit a portrait on location last week. 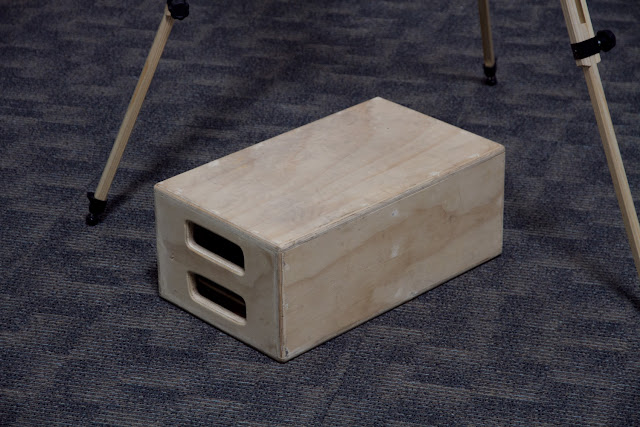 One of my most important tools.  The standard apple crate.  Used in film and video productions everywhere.


I was shooting some executives at an industrial company here in Austin last week and the client let me know that there were one or two execs in other cities who would also need to be shot.  They weren't going to budget for me flying out of state just to do one or two head shots so they asked if I would document the set up and be willing to share the information with photographers with which they have relationships in the other cities.  Of course.  I'll share just about anything. 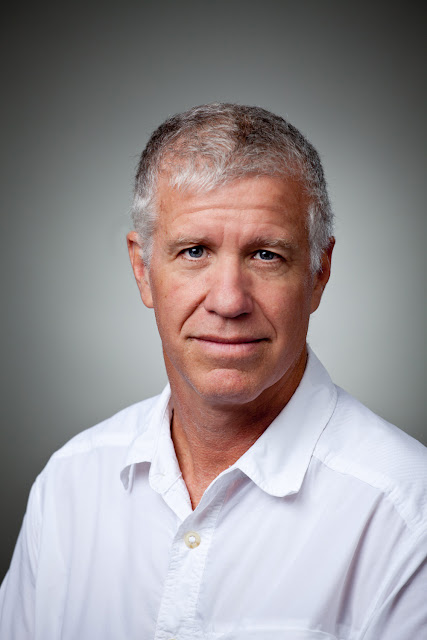 I used this handsome devil as an example because it was easy to get a model release from him. :-)


It's pretty standard lighting.  In a nutshell it's a big soft light from the left, a big white reflector from the right, a gridded flash on the light gray background and a small flash in a small softbox from the back of the set.   The image I chose to use as an example doesn't have the backlight added in.  Sorry.  You'll just have to imagine it. 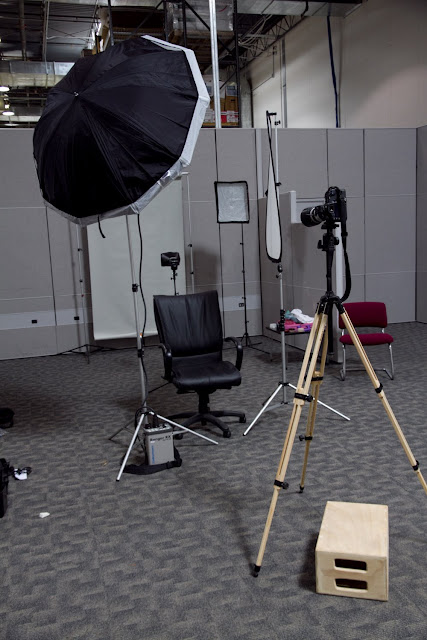 Above.  The view from the left of the camera.  You can see that I'm using a Softlighter 2

60 inch umbrella with it's diffusion "sock" on the front.  It's hooked up to a 1200 watt second Elinchrom Ranger RX AS

pack but it's on the low power tap and set to a fairly low setting.  Though the wide angle lens I've used to make this image distorts the size/distance relations the light is really right next to the chair.  Almost touching it.  The camera is a Canon 5dmk2

lens at around 135mm as my taking lens. 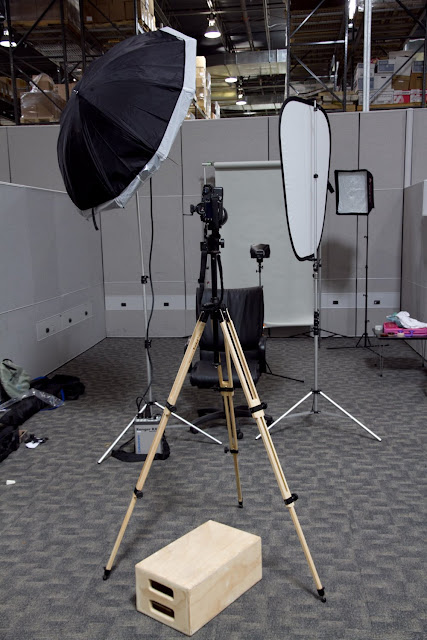 Above is the view from right behind the camera and it gives you a better idea of the various relationships between the lighting instruments.  I use the apple crate to stand on because I am five feet and eight inches tall while some of the taller subjects were six foot, three and six foot, five.  (Mutant giants?) 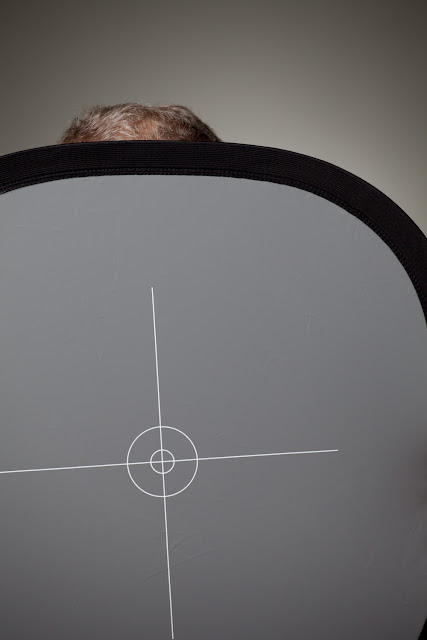 I always use this zany Lastolite

pop up target to set custom white balances with.  I like this Will Crockett version because it has a target to focus on.


I use an incident light meter to meter every light source and get them all in the right target zone.  I base my whole exposure around f5.6.  I fine tune it for each person. 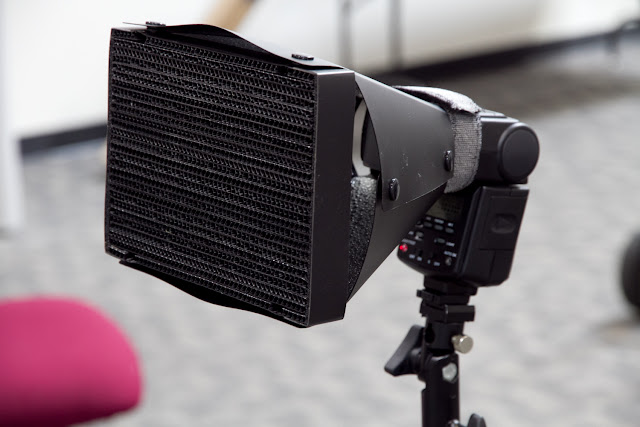 Here's what I'm using for the light on the background.  It's a Vivitar 383 df

used in the slave mode.  I like them because in the slave mode they are triggered by an optical slave and the setting overrides the auto shutoff.  Since the light is basically direct it only takes 1/4 power to give me the spot I want.  The box on the front is from Speedlight Prokit.  It's a multi-purpose little light modifier.  You can use a grid on the front or a softbox style diffuser.  It's a pretty good accessory for taking the edge off direct light and softening out the edges.  With a grid in place the fall off is very pleasing. 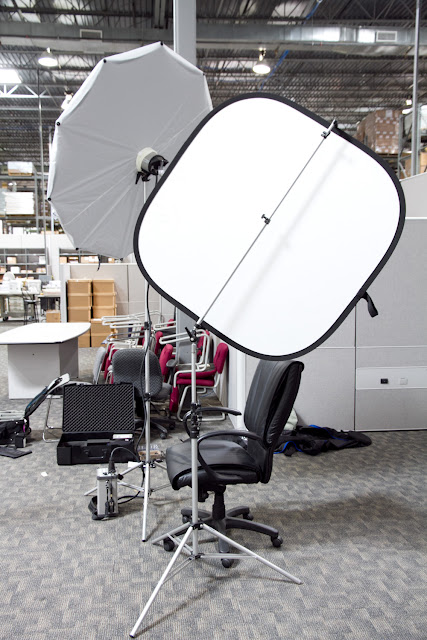 This is a view from the right side of the set up.  The combination of a 60 inch softlighter diffused umbrella and the 48 inch white reflector is the basis of most of my quick light set ups for indoors.  By moving the umbrella closer and further from the subject I get more or less contrasty light.  By moving the reflector closer or further from the opposite side of the subject's face I get more or less fill in the shadows. 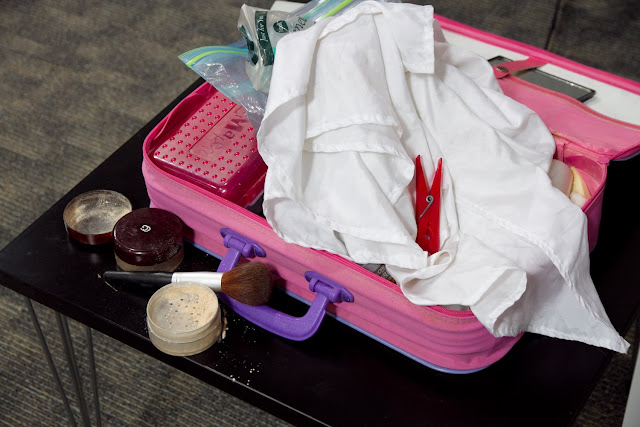 And where oh where would I be without the Barbie kit?  Most of the executives I photographed needed just a touch of translucent powder to shut down the shine on their foreheads and noses.  Please note the white barber's drape which I put over the subject's clothes.  Keeps light colored powder off dark colored jackets. 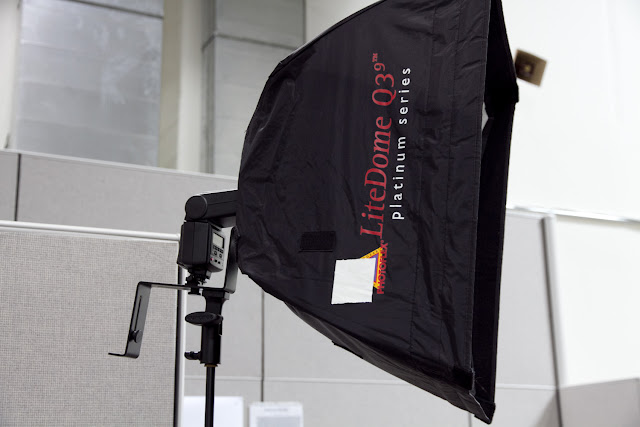 There's nothing special about the back light.  I just want the barest touch of back light so I use another Vivitar 383 df down at 1/8th power and it seems just right.  I think people make a very common mistake when they use a back light bare.  The light just doesn't seem to match the rest of the light in a conventionally lit scene.  A small box works well.  If we were working in my studio I might have used a big piece of foamcore to flag the light and prevent spill but the space was big enough and the ceilings far enough away that it just didn't become a problem.  A grid on the front of the box would be a good addition as well. 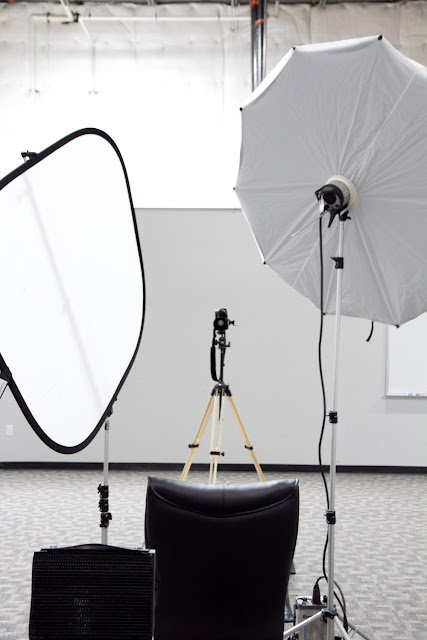 Here's what the scene looks like with my back right up against the grey a paper looking out toward the camera.  Not too intimidating.  Pretty straightforward.  It's nice to have a standard set up that you can fall back on when you are working quickly and need repeatable results.

I like the Elinchrom and I also like the Profoto battery units.  It's nice when you are in a big setting not to have cables running to distant sockets.  And at the low power settings I was using that particular pack is good for several thousand flashes.

We set up starting at 8:00am and finished testing the set up at 8:35am.  My first of ten portrait subjects, the COO, arrived right at 9am.  We finished our last shot just in time for lunch.  My default for delivered food on industrial shoots is usually Jason's Deli.  I order the quarter Muffaletta.  Good stuff.

After a "walking lunch" I broke down this set up and we proceeded to our afternoon shoots around the factory using mostly available light and a good tripod.

So, what constitutes a good tripod?  That's coming up.
Posted by Kirk, Photographer/Writer at 21:18 12 comments:

Learn how to do the big group shot. You never know when you might need it. 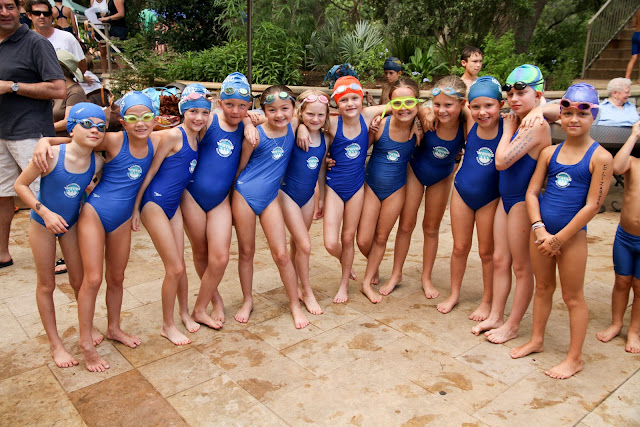 
This is a very short blog.  I have very little actual advice to give about shooting group shots.  My first piece of advice is to stop spending time fidgeting around with your gear!  This was what we call a "grab shot".  You throw out a suggestion and hope people respond.  When they do (like these young ladies instantly snapping into a line up and throwing arms around their comrades) don't waste time fooling around with how you might compose or whether the exposure is "just" right.  Just push the button a few times till they get bored and then move on.  In the tradition of Zen Buddhism there is no "right" or "wrong" way to do something.  Just decide and go.

My second piece of advice is to always take advantage of overcast days.  Groups in full sun squint, are uncomfortable and the results are way too contrasty.  If you can't wait for clouds look for shade.

My third and last piece of advice is to start with small groups and move your way up to the larger ones.  Get a feel for being in charge and then come to grips with the fact that you'll never truly be in charge.
If there's no money on the table it's a hell of a lot more important to have fun.....and be in the fun....than it is to make everybody miserable getting the  "perfect shot". 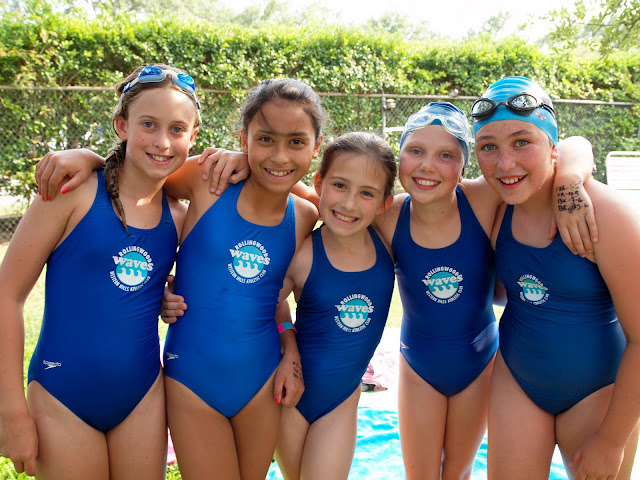 ©2010 Kirk Tuck.  Practice on the smaller groups first....  If you're in the shade you don't even need fill flash.
Posted by Kirk, Photographer/Writer at 17:05 1 comment:

Trumped by a graphic designer. 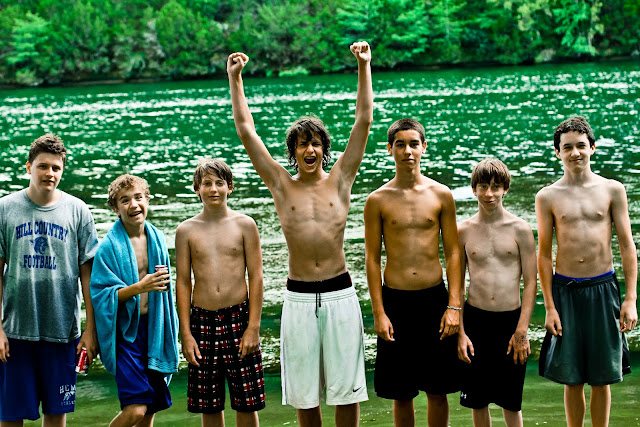 
I've been photographing my kid's Summer league swim team for the better part of ten years now and I like to think my photos are pretty good.  Last Saturday was the last swim meet of the season and, to tell the truth,  I was too burned out to lift up the camera and hit the project with gusto one more time.  Had too much on my brain.  So my wife, Belinda, (who is also a wonderful graphic designer) grabbed my Canon 7D and asked me how to use it.  I was going to give her the long explanation but she just wanted know know if the focus would lock when she pushed the button half way down.  Yes.  I put the camera on "P" for professional, set the focus for center group, one shot and she was on her way.

When we did the final slide show on Sunday night, for all the parents, kids and coaches, this was the hit image of the evening.  Now, looking at stats on Smugmug this is by far the bestseller from that day.  And she did more.  Many more.  Like this one: 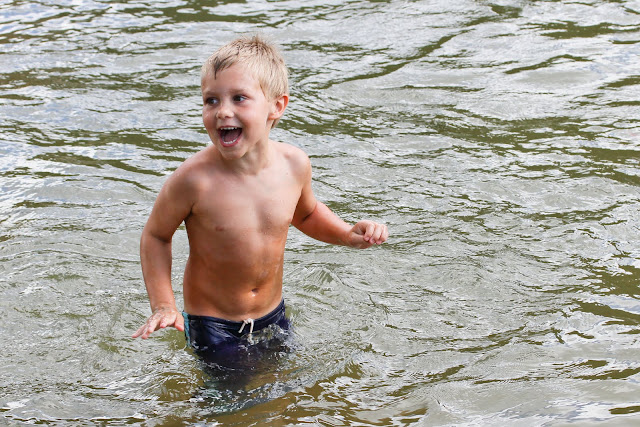 
She captured the exuberance of the kids in every shot.  Mine seemed so posed by comparison.  The amazing thing is that she did about 250 images using just one lens.  It was the only one I brought along (I figured we had more than enough images for a good slide show by that point in the season-----silly me).
It was the 60mm macros for Canon's smaller sensor cameras.  Equivalent to about a 96mm lens on a traditional 35mm camera.  No zoom.  No wide.  Definitely a "zoom with your feet" optic.

She shot everything in jpeg.  Large/fine.  And it was weird when I went to process the stuff.  No exposure comp was really needed.  After she really got into it she was able to really connect with the kids as well.  I love this photograph because it's so close and so full of energy: 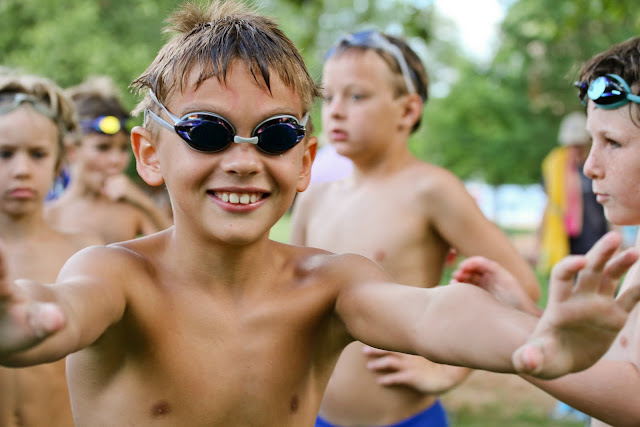 
When I look at the photos it makes me wish I could start all over again and unlearn so much of the "safety" stuff I've subconsciously taken on over the years.  But most of all I wish I could compose like she does and ignore the technical stuff like she does.  One of my wry, female, creative director friends saw the images and pronounced (loudly and with a certain amount of serious intent....)  that I should become Belinda's agent and assistant.  I could do the techno stuff and Belinda could do the art.  Been thinking about it ever since......

She's a very good graphic designer.  Here's her old website:  www.belindayarritu.com  the new one is just waiting for me to write some copy........

I shouldn't be surprised that Belinda is a good photographer.  She was shooting with an Olympus OM-1 before I ever picked up a camera.  And if I remember correctly she only had one lens.....the 50mm 1.8.  And she's worked with the best photographers in the business for the last twenty years.  I guess having a point of view and the visual chops is the counterpoint to so much of what I get around to talking about here.

Anyway, I just wanted to share.  Drop a comment her if you like her stuff.  Sometimes she gets around to reading the blog.
Posted by Kirk, Photographer/Writer at 16:55 7 comments: