Getting your Goat.....A photographic story. 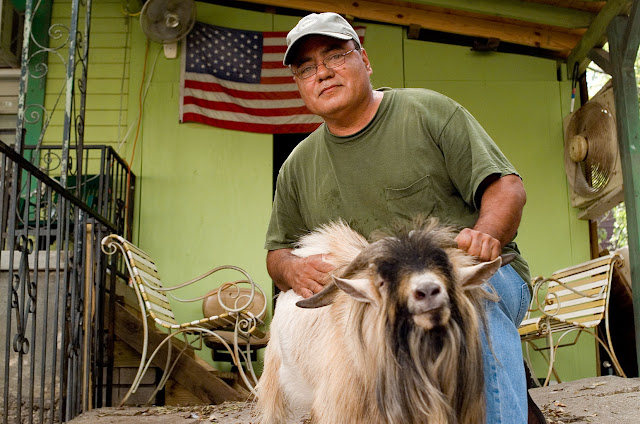 I know I've shown the "Goatman of South Austin" before but I just stumbled across this and I wanted to show it again.  This was part of a very strange project that I did for David Steakley, the artistic director of Zachary Scott Theater.  The city of Austin has an unofficial motto that shows up on bumper stickers and t-shirts.  The motto is:  Keep Austin Weird.  The charm of Austin has always been its over-educated and profoundly eccentric core.  You know the types,  people with doctorates who dropped out of the rat race to make hand made kaleidoscopes.  Brilliant musicians who used to be physicists and photographers who started out as electrical engineers.  A large contingent of the population doesn't let a week go by without listening to live music or swimming in the sacred waters of Barton Springs.  And, while they may own a tuxedo and some business suits the perennial dress code is always shorts and sandals.

I remember when the business crowd first got some traction back in the late 1970's and a horde of rapacious real estate developers descended on the little town from big cities back east.  They were astounded that the best restaurant in town was frequented by people in sandals and jeans and nice t-shirts.  And the amazing thing is that even with all the development and the inevitable homogenization of many segments of the demographic the weirdness hasn't been churched or profit-motived out of the town.  Studies from the chamber of commerce even point to the culture as a terrific draw for business.

So David wrote a play called, Keepin Austin Weird, to celebrate our city's unique nature.  And as part of the marketing he wanted to put together a print piece that showcased some of the 200+ people he researched and inteviewed in his own creative process.

I got a list and I headed out around the city to line up some photographs.

The shot above showcases a south austin resident who keeps a full grown goat at his central city house.  The city tried to remove it, citing zoning restrictions, but the gentleman was able to successfully argue that his goat was a pet and not agricultural livestock.  He won.  And that granted him ingress to David's list.

How informal was the shoot?  I showed up with my Kodak DCS 760 camera and an old Nikon 50mm 1.2 lens,  met the man and his goat and shot a bunch of frames.  We were both pretty happy about what I was shooting so I got back in the car and went on to my next person.  I've always loved the green of the wall, the American flag in the background and the two old lawn chairs in the background.  The goat was ferocious and territorial.  Made a great "watch goat."

Would the photo have been better if I spent hours lighting it?  Nope.  If I used a 40 megapixel camera?  Nope.  Would you have done it differently?  No doubt.


1.  I finished my big projects for this month and am back to working on a new book.  Many thanks to all the people who e-mailed me with good suggestions for video output for presentation.  And many thanks to the people who responded nicely to my new unmoderated comment section. It's nice that I don't have to spend time as a gatekeeper.  And remarkably, everyone (with tiny exceptions) is being civil.

2.  The Texas representative for Zeiss products met me for breakfast yesterday and dropped a 21mm Zeiss lens for Canon ZE in my lap.  I'd asked about it because I'm interested in rounding out my selection of prime lenses for my Canon gear.  I'll be testing it for the next three weeks.  After having used the Canon 20mm for the last year all I can say is that the build quality alone is enough to make your jaw drop........obviously, a report coming soon.
Posted by Kirk Tuck, Photographer/Writer at 14:38

Great story and I love the shot.

Kirk - the Zeiss 21mm is the only UWA that I've been thinking of getting (other than maybe one of the TSE lenses)... it has a reputation that opens doors and has Maria Shriver driving Bentleys for you....

The Zeiss 21 sounds exciting! Four primes and a Canon! The world is spinning as it should! (ok, maybe 5 primes for a perfect spinning world!)

I hope Austin always remains weird. As Texas has seemingly gone so right wing in the recent past, there needs to be a group/entity holding the smart-but-crazy torch. After 30 years away, I was glad to see 21st Street Co-op still standing...it gives me hope.

And really cool that you got a new Zeiss lens.

I feel like we're the rebel alliance in the middle of the Empire sometimes. Why are conservatives so crazy and un-fun?????

I resemble that remark and un-fun..I beg to differ.

Keep me honest, Frank. It's all about the balance....

You will love the 21mm. I hope you have nudged Zeiss to consider a 135mm.