My Afternoon with James Evans and Andrew Eccles. 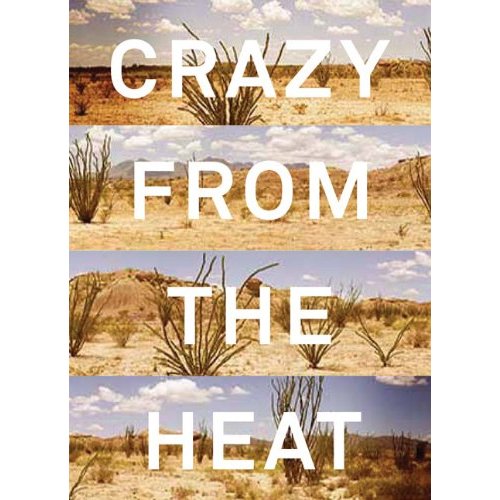 Crazy From The Heat.

By James Evans.
A few months ago I shot a black and white video of photographer, Michael O'Brien, talking about his new book, Hard Ground

.  He shared the video with James Evans and the next thing you know I'm getting ready to do a video of James talking about his new book,  Crazy From The Heat

.  James is one of the most interesting photographers I know.  A self described hermit, he moved to Marathon, Texas (pop. 250) about twenty five years ago and he's been photographing the landscape, the animals and the people of this desert region since he arrived.  He doesn't pay much attention to what everyone else is doing, he just does work that pleases him.  He is his first audience.  But his work is appreciated by collectors, major magazines and museums.
I met James 28 years ago when he moved up to Austin from Corpus Christi.  He claims that I'm the first person he met here in Austin (it's a long, good story).  And our paths intersected from time to time since Austin was a small town then.  When the bottom fell out of the local economy in 1988 he decided to chuck the dream of being a commercial photographer and do something a lot more fulfilling: Become a real artist.
We made plans a couple weeks ago to shoot an interview this weekend.  He was going to be in town for a gallery opening at the Stephen L. Clark Gallery.  I dropped by the opening/book signing to pick up a copy of the book so I could look through and decide what we'd talk about.  While we planned our session he nervously asked me if it would be okay if he brought along his friend from "out of town",  Andrew.  I wanted him to feel comfortable, right at home, so of course I readily agreed.  I had no idea he was talking about Andrew Eccles.  Andrew is kind of a legend in advertising and editorial portrait photography and a former first assistant for Annie Leibovitz.  His work is amazing in a totally different way from the way James's work is amazing.
So, five o'clock rolls around.  The temperature outside has been holding steady at 105 for a few hours now.    I've had the studio air conditioning set to super-turbo high for the better part of the afternoon (we'll need to turn it off to record good sound and I want it under 70 degrees when we go "dark cool.").  The Toyota rent-a-car slides into the driveway and James, his wife, Marcie; and Andrew pile out and head into my frigid, little studio space.
We do the refreshment offer/request thing and get down to work.  I'm using my trademark lighting set up.  That means just about anything that throws off light pounding through a six foot by six foot silk diffusion scrim.  Today I'm using two of the big LED panels as primary light sources and they're giving me exactly the light quality I want and BONUS! the exact exposure I wanted:  ISO 200, f2.8, 1/45th of a second.  Magic.  And amazing quality.  I also stuck another LED light source on the background for a little separation.
James spoke about the fun of immersing oneself into a sparsely settled area.  Where I have thousands and thousands of people around to potentially make portraits of James has a hand full.  But what he lacks in choice he makes up for in depth.  He's totally in.  He remarked that a small town like Marathon turns everyone (for better or worse) into family.  You know EVERYONE.  Your documentation is their life.  Their life is your work.
James has taken a different path than anyone I know.  He's earning a living by selling his work through his gallery and galleries in Austin and around the country.  His work is in many, many private collections.  But he barely concerns himself with the nuts and bolts of commerce.  He's not a blogger, has only a rudimentary website, probably doesn't twitter.  His focus is making work that hangs together over decades.  And his true work is pleasing himself and being happy with his life.  The scary thing?  It works. He love the adventure of shooting and he loves the time he spends in the traditional darkroom.
To a large extent James and Andrew are the "odd couple" as far as friends go.  Both came from Corpus Christi.  James ended up chasing the light across the lone deserts of the southwest, sleeping on the roof of his car and spending weeks and months at a time pursuing projects with no deadline and no client other than himself.  Andrew is the quintessential New York super photographer with an amazing reputation and an enviable body of commercial and editorial work.  And yet they seem so comfortable as friends.  After a couple of hours of catching up, shooting and then having the video camera turned on me, James, Marcie and Andrew went off in the little red Toyota Corolla determined to have sushi at Musashino.  They invited me to join them and I would have loved to go but Belinda was making Ratatouille, there's a super Tuscan breathing on the sideboard,  and my life is different from theirs.  They're catching up and James is still basking in the glow of a very successful gallery show and book signing.  Sometimes it's better to bow out than to get in the way.
I should have my interview with James up sometime this week and I think some of you will really love it.  His message is unmistakable:  The government, corporations and society try to make you into obedient and controllable cogs but you can do whatever you want to do.  The system will take care of itself.
Book Notes.  The book was shepherded through to publication by many people but the designers were D.J. Stout of Pentagram, and Julie Savasky, also of Pentagram.  The design is impeccable and gives the images in the book a very comforting flow.  The images are the best examples of wide open landscape, night shots in vast empty spaces, whimsical shots of animals and defining shots of the feel of being in west Texas.  If you are interested in landscape it's a "must have."  The printing defines world class.  It's a nice romp through the desert.  My favorite?   Nude with Clouds.
Posted by Kirk Tuck, Photographer/Writer at 19:45

Elliot Erwitt, Michael O'Brien, James Evans, D.J. Stout, Will van Overbeek, Andrew Eccles. Do you personally know everyone cool in the photography world? Can I hang out with you guys?

Kirk I am sure the video will be great but it may have a hard time replacing the images your words have painted for me describing your day. Great writing!

Having spent time living on a ranch in the vicinity of the Black Rock, I totally understand the fascination of a town like Marathon and the landscape. Just passing through a place, or spending a day or two doesn't begin to get you acquainted with it's character and moods. What a cool way to spend an afternoon.