Do you ever buy weird lenses, test them and really like them? 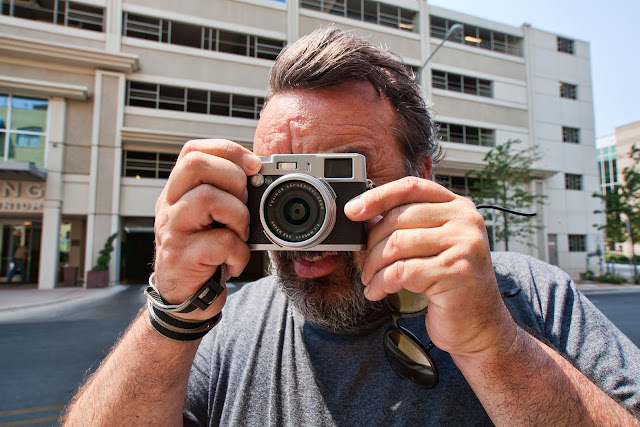 .  I'm proud to say I didn't put a scratch on the camera.  But Will needed more hand's on time with the camera so we decided to take a stroll around downtown.  Couldn't be a better day for it,  temperatures in the mid-90's and a healthy dose of humidity to boot.  I agreed to walk because I had something else I wanted to shoot and test out.
It all started when I left a part out of a consignment package.  The lighting unit sold and the buyer wanted to know if I could supply the missing part.  Silly me, it was right there on the shelf.  I headed over to Precision Camera to drop off the piece.  I lingered a bit and browsed.  Always a dangerous thing in an "adult candy shop."  And wouldn't you know it, right there in the consignment case, nestled in with a comfortable group of Canon zoom lenses was a lonely Tamron wide angle zoom.  I asked to see it on a camera and I decided to take it home.
What is it?  It's a Tamron 11-18mm SP AF Aspherical DX2 UD IF.  It's a wide angle zoom that was released in 2005 and superseded some time between then and now by a 10-24mm with even more initials behind it's name.  The DX in the name indicates that it was designed for cropped sensor cameras; in this case, the Canon APS-C frames.  Unlike the Canon EFS lenses it will mount on a full frame camera or (my favorite= the APS-H frame with a 1.3X crop factor).  Mounting it on anything other than an APS-C camera almost guarantees that you'll get some vignetting when you shoot at the widest focal lengths.  I expect that.  But I learned when I owned the Nikon 12-24mm DX zoom that as you zoom to longer focal lengths on some of the zoom lens you increase the image circle and it's entirely possible to use the lens as a superwide for bigger formats.  Really!
Here's what I've found to be true.  At 11mm, when used on my Canon 1dmk2

I get vignetting in the corners.  To see how much go straight to the bottom two images in the stack below.  One is shot at 18 and the other at 11mm.  See how much vignetting there is at f8?  Not nearly as much as I thought there'd be.  And my goodness, that's a wide angle of view.  See the one shot at 18mm?  No vignetting at all.  And I didn't remove anything in post.  Initial tests are making me happy because all of a sudden I've got a very wide angle lens for my two APS-H 1dmk2 cameras.  And for the 7D and the 60D Yippee.  More after this next photo...... 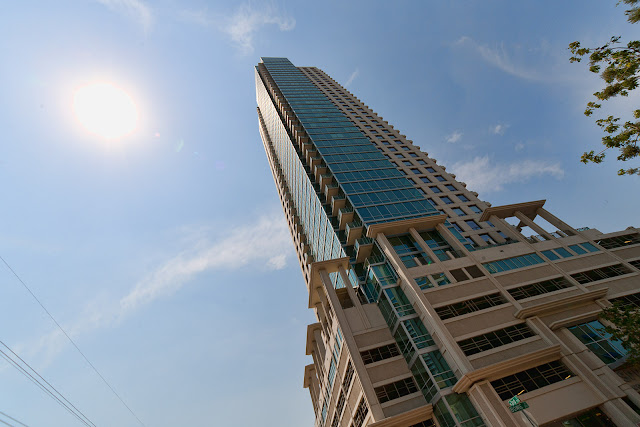 full frame. It's a very sharp lens and it's very well corrected, geometrically, but it does have one little fault.....I found that it has more flare than I'd want.  Especially if there's a light source in the frame or near any one of the corners.  To be fair, I was doing the worst case scenario= an interior with lots of dark accents and light thru the windows.  But it was still worse than I expected and I ended up doing some remedial repair in PhotoShop.  I didn't expect a used, $350, third party wide angle zoom to do any better but today I was pleasantly surprised.  I shot this image (just above), including the shadow side of the building, with my camera pointed up to include direct sun.  And while the lack of flare was impressive even more impressive was the lack of ghosting in the image.  That's some pretty remarkable resistance to flare for a wide angle zoom lens.
But in the back of my mind I kept thinking that, when my evaluation of the Zeiss 21mm

was over I should probably go ahead and purchase it because it did show high sharpness when I shot it on a job last week.  So I almost resigned myself to the expense but figured I'd shoot a few more things downtown and see if the Tamrom was anywhere near as sharp.  I had my doubts..... 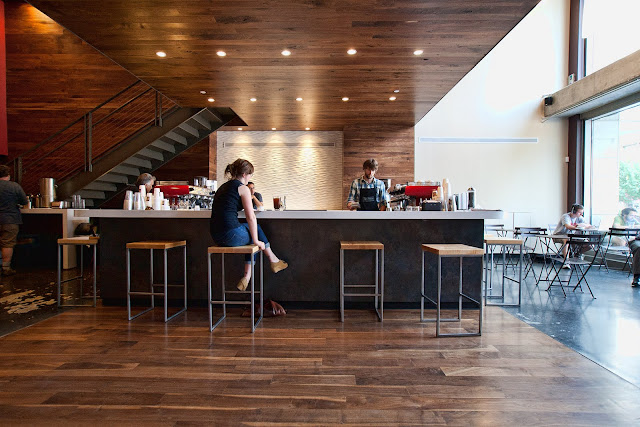 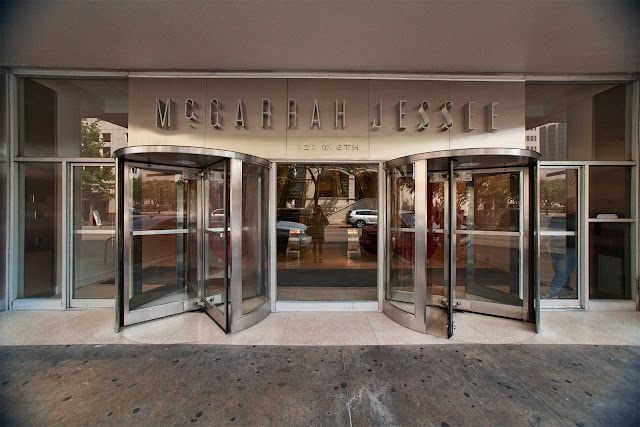 Definitely a bit of geometric distortion but most of it was simple barrel distortion that could be corrected with Photoshop's Lens Correction filter...  That's my reflection in the middle window. 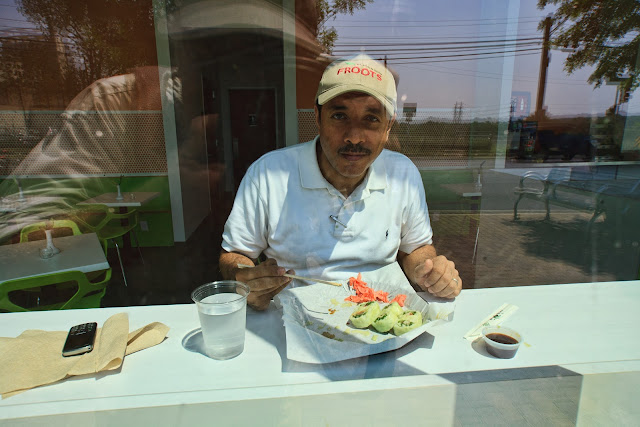 Tacit approval?  No, active approval.  I smiled, pointed at my camera and he gave me the "thumbs up" sign.  I shot and then smiled again and waved "goodbye" 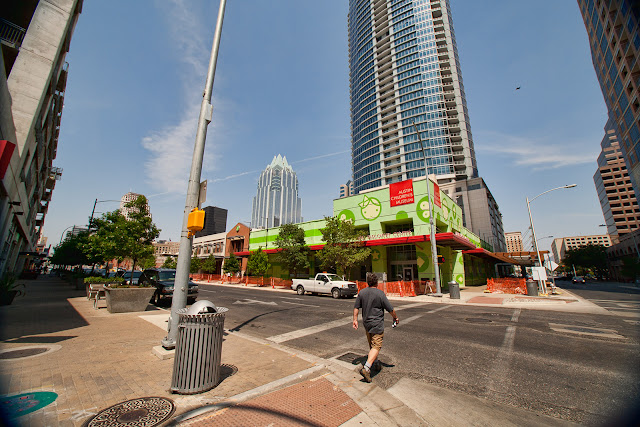 It's always hard to tell things from small jpegs on the screen but when I looked at this raw file at 100% I was happy with the sharpness at infinity. 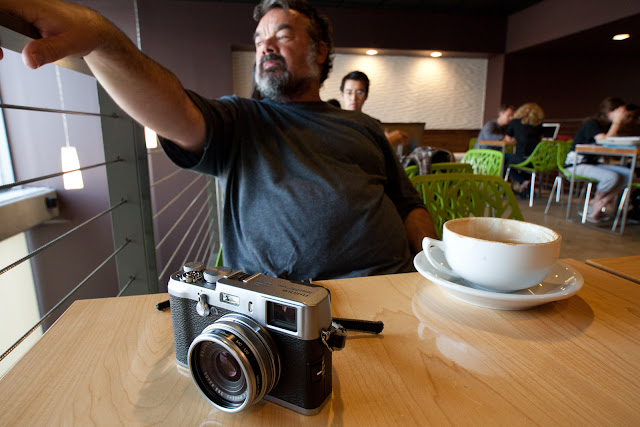 But all those doubts evaporated for me when I leaned into this shot.  The Fuji X-100 is my target and when I blow up the file the engraving around the lens is rendered with a high degree of sharpness.  This was shot both handheld and wide open and the lens acquitted itself well.  What is of interest to me is the pleasant bokeh of the out of focus areas in the background.  Common wisdom has it that ultra wide angles don't have good bokeh.  But I venture to say that this one is pleasant.  And sharp. 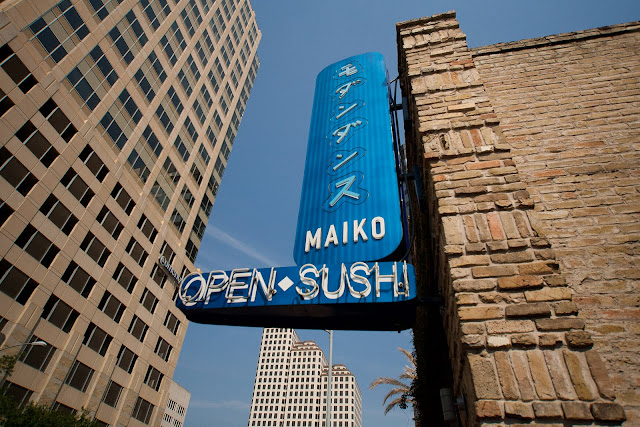 If you've read my blog for very long you probably know that I'm not typically a wide angle lens shooter.  So what drove me to buy this lens?  It all started when I got a call to shoot interior images for an electronics company.  The interiors were in a very posh and very private club somewhere in central Texas.  (NDA signed).  I wanted to do a good job and, while I shot with a four by five view camera and Schneider Super Angulons for years I'd basically sent all of my "would be" architectural clients to my friend, Paul Bardagjy, who is a wonderful architectural photographer with a feel for design and a head for detail and quality.  I decided to do this job because the client and I go way back, and there would be interesting technical shots that I thought I could do a good job on.  My only reservations were about optics.  I'd be shooting the job with a Canon 5dmk2 and the widest lens I had on hand was a 20mm Canon EF lens that is a bit less than sharp on the corners and tends to have some chromatic aberrations even when stopped down.  It's not a bad lens, it's just not as good as it should be for straight lines and images that require across the frame sharpness.  For most of the stuff I shoot with it I'm happy but straight lines in rooms is another thing.
I'd been invited to borrow a new 21mm  Zeiss so I did and I enjoyed the shoot.  Far easier, in a way, than the old days of view cameras but I was reminded by Paul that the rules are the same:  Watch for the details, flag the flare, use the polarizers, bring grad filters, style, style style.  The job went well and the client has two more projects in the chute.  Hence my search for a lens that I like, that works, that won't break my budgets.
Have I found it in the old used Tamron? Maybe.  It's pretty darn good. But I'll go on looking and see what's out there.  Next on my list is the new Canon 24 T/S lens.  I'll try that one on for size as well.
But I will hang on to the Tamron, it's a very usable set of focal lengths, especially for the format it was originally designed for.  And I'm impressed with the center area sharpness.  I also want to try out its replacement, the 10 to 24mm.  But that's another day. 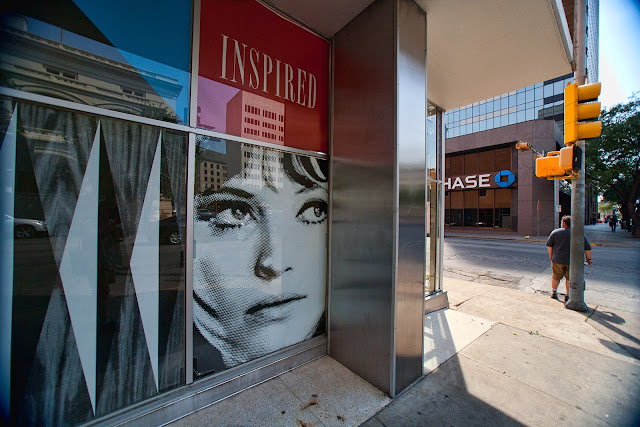 This is the lens on a 1dmk2 (1.3x crop) used at 11mm.  You can see the vignetting in the corners.  But the rest of the image is very well behaved.  I love giant window posters. 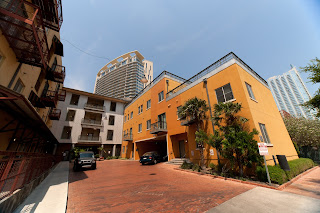 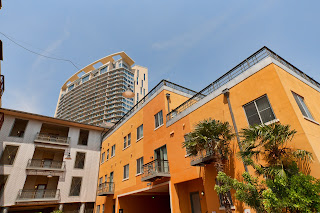 What did I learn from my latest experiment?  That some older lenses can be bargain gems.  That the common wisdom that Di, DX or other lenses designed for APS-C are unusable on bigger sensors is wrong.  That cheaper lenses can have better flare characteristics than some of their pricier competitors.  That zooming can be fun.   That's about it.  Thanks.