Late afternoon and into the evening with two good friends and a Nikon V1. 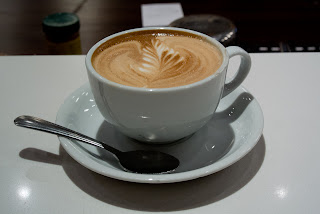 My friends, Andy and Frank are photographers.  They are as interested in the art and craft as I am and they are quiet and fun to spend time with.  We decided to meet downtown at Medici Cafe late this afternoon and go for a walk, have a little dinner and spend some time playing with our "miniature" cameras.  I thought it would be the perfect opportunity to see how my new little Nikon handled low light so I stuck the 10mm to 30mm kit lens on the front, crammed the 10mm into my shirt pocket and ventured into the land of "no parking."
I thought I'd be early but the guys were already there.  They were both in an Olympus micro mood today.  Andy was sporting an EPL1 with a Panasonic 20mm and Frank brought along his EP3 and switched between his new 12mm and his 45mm 1.8.  No tripods.  No flashes.  No other stuff. 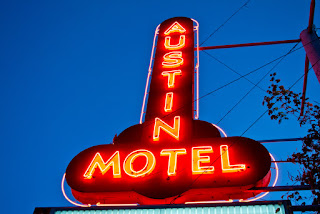 We headed for South Congress Avenue and we were reveling in the sweet light that skims across the lake just before sunset.  On the Congress Ave. bridge we met this "Occupy Austin" protester waving a flag and waving at cars.  He said he wanted to get away from the city hall crowd and do his own thing so....there he was.  We approached and asked if he would mind us photographing him.  He didn't mind in the least. 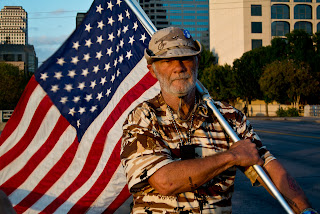 As far as I can tell the Nikon focuses quickly and accurately. One thing I've noticed is that I like to dial down the exposure by one third to two thirds of a stop under the indicated values in order to get files I like.  In post processing I always add a little bit more black with a the black slider in Lightroom.  And I am likely to use the "punch" preset with some of the files as well.  It imparts a fun grittiness to the images. 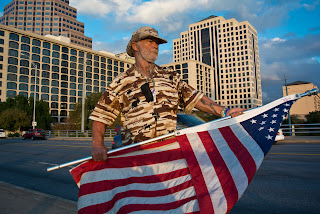 When we first started out there was a strong wind and low clouds whipped through the late autumn sun like a slow motion movie effect. 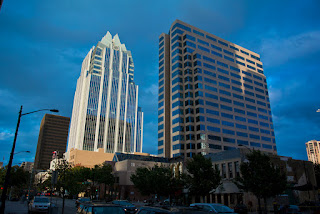 Everywhere we turned in downtown the light and cloud mix created little dramas on the faces of the buildings.  We were shooting and walking.  Shooting and walking.  Pretty soon we got our cadence down and  were able to walk in some sort of coherent pattern.  I'd been looking forward to our walk because Andy has a style that is untainted by previous exposure to the traditions of heavy, film based photography.  He's a natural with the LCD screen on the back and consistently tells me not to depend on the viewfinder but to "use the force."  I wanted to open myself up to new ways of photographing and looking and so I was purposely studying his approach.  Using the live view on the back screen he would maintain a loose and fluid methodology, making little adjustments with his feet or the bend of his knees.  The live view allowed him to make almost unconscious corrections to exposure and shoot quickly.  I tried to follow his lead and not be as rigid as I know I am.  Too many rules in my brain.  Reminds me of my favorite bumper sticker about dogs:  "More wag, bark less." 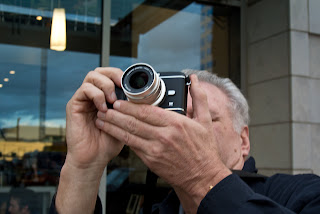 Another odd thing about this evening.  Usually when I'm in a crowd of photographers I'm the odd man out, shooting with a bag of single focal length lenses.  This evening I was the odd man out for shooting with the only zoom in the trio.  The 45mm 1.8 on the Pen EP3 is a wonderful combination....Must.....resist......buying.....temptation.... 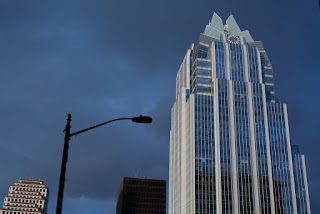 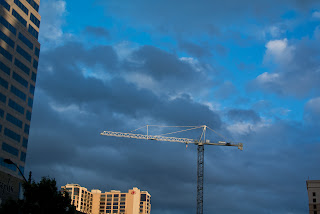 When I got back home I downloaded my files and started to edit them.  I saw several things.  The Nikon was a bit too warm in many of the downtown building files.  It may be that it was really accurate to the way the scene was being lit, a low, late sun is very warm.  But the scenes all looked better as I made the color bluer in my raw conversions. 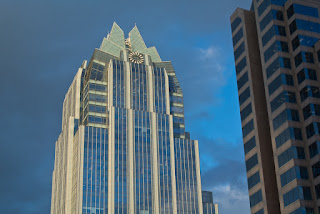 The second thing I noticed is that the Nikon has a very fine, black pepper grain to images shot over 640 ISO.  It's not apparent until I zoom into 100% but it's there.  There is none of the chromatic noise that causes the color sparkles in older camera images.  And, even though this very sharp and monochromatic noise sneaks in it doesn't seem to affect the sharpness of the files.  I'll stand by my original observations and say that you are good using ISO's up to 800 without much restriction (DON'T underexpose) and, with care, at 1600.  3200 is reportage with the intention to convert to black and white.  Even the files at 250 ISO have a little bit of this black pepper noise but it's not at all intrusive and doesn't seem to effect the image at reasonable print sizes. 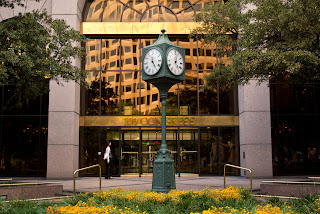 Shooting in a group, no matter how small, always entails a bit of compromise but tonight was smooth.  One of us would linger behind to explore a reflection or something in a shop window and would catch up.  One person would find an interesting subject and go off on a tangent.  And we'd all come back together again, minutes later and compare notes.  I like to see how people photograph.  We're all so different.  Since we weren't lighting or directing each shot came and went quickly. 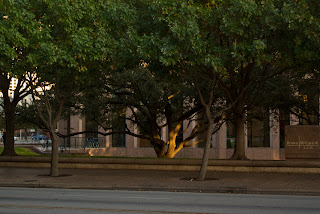 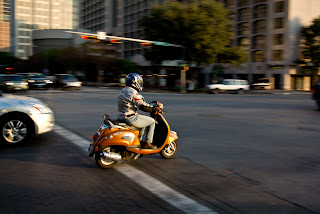 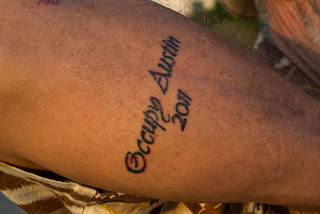 This is a close up of the forearm of the protester on the bridge.  That is not a temporary tattoo.  It's the real deal.  Still fresh and red around the edges.  He had other interesting tattoos as well.  If you want to shoot something specific sometimes you just have to ask..... 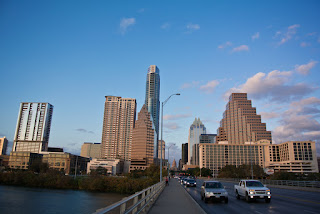 As we headed south on the bridge I turned around to snap a few images of the downtown skyline.  Austin has changed so much in the last five years.  Our downtown has been totally revitalized and is now the interesting place to be.  Many of the new skyscrapers are resident towers and I look forward to a time when we have a real, 24/7 downtown to move through.  The one thing we lack right now is a good number of 24 hour restaurants.... 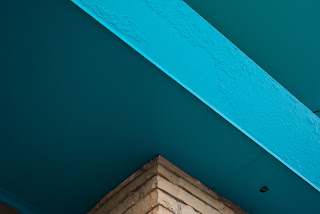 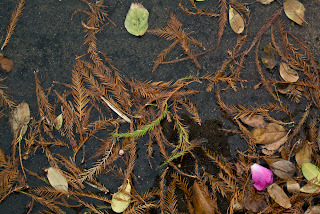 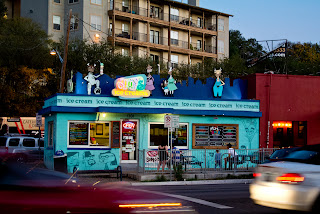 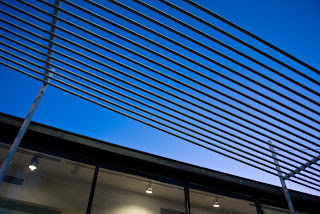 As we worked our way toward the food trailers I found myself falling into the familiar pattern of looking for familiar patterns.  The Nikon EVF is a perfectly suited for the process of grabbing graphic nibblets.  You see, essentially, the finished photo as you are previsualizing it and visualizing it on the screen.  It's kind of like seeing the future and the present simultaneously. 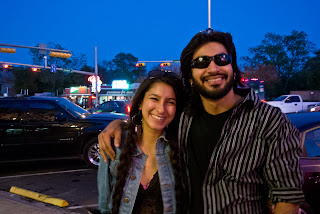 But I have to consistently practice my people engagement skills even if I flub the technical stuff.  The camera might be up for 1/8th second exposures but I'm not sure I am and I'm pretty sure this couple was moving a bit as well.  (Lit with very, very low incandescent lighting coming through a shop window.) 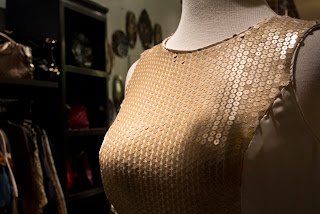 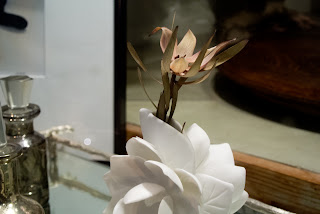 I photographed this flower/vase because I liked the combination of textures but when I developed the image in Lightroom I liked it more as an example of the graceful highlight transitions I could see in the different tones on the white ceramic. 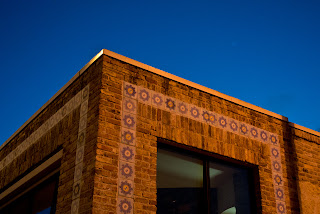 The combination of streetlights and the afterglow of sunset makes for wonderful color contrasts.  I wish the skies would hang there, in this balance, for hours everyday.  As it is you have only glancing opportunities to catch a perfect balance and then it's gone.  Makes for a bit of a challenge. 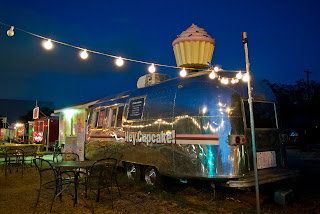 I can't speak for the other guys but for me this was a welcome photographic vacation from my long day of photography related stuff in the studio.  One of the banes of modern commercial photography is the long hours spent in front of a monitor doing things like, clipping paths, black and white conversions and fine tuning large files destined for print.  I spent hours this morning taking 40 megapixel raw files, converting them into beautiful color files, making masks to drop out backgrounds while leaving wisps of hair intact and then uploading nearly a gigabyte of files to my client's FTP server.  Once you add in following up on some billing and putting together a few bids you find that you've spent the bulk of the day in a chair at a desk.  Which is decidedly not what I really signed up for in the beginning of this whole photography lifestyle thing.  But it's cathartic to get out as the light changes and the wind changes and walk down a busy street with the wonderful feel of a camera in your hand.  And even if you come back without any images you want to show to anyone else you know you've spent time well. 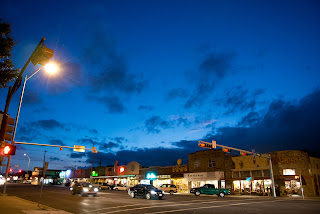 I must confess that the photo above and the photo below were intentionally shot into light sources to see if the Nikon could be coaxed into showing off "red dot syndrome."   I think the camera passed this test well but I offer no guarantees for people who want to include the sun in their frames.  I do love the mix of street lights and ropes of bulbs against an evening sky. 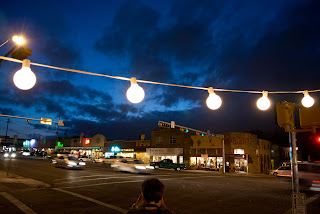 We stopped at the end of our route and ate a jovial dinner at a fish taco restaurant.  We talked about cameras and we talked about life, and our plans for the holidays.  It was a simple moment but one without a care in the world.  And that's a rare thing to be able to say these days.  Our intention from the beginning was to walk.  Everything else would be whipped creme on top of the sundae. 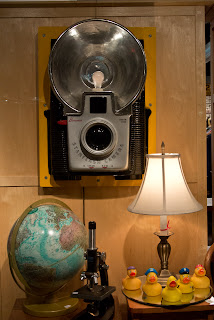 This shop on south Congress Ave. had a display of old cameras.  35mm and other odd formats from the 1940's and 1950's.  The coolest thing I saw in the shop was this giant camera.  Every once in a while the flash bulb would light up.  The rubber ducks were a nice counterpoint....... 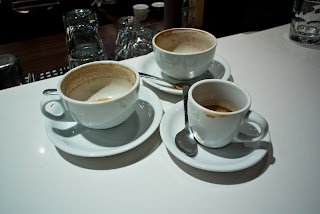 We wound up back where we started and we sat at the bar and watched people and talked to each other, and to the baristas.  In one of those, "Only in Austin" moments we were informed that salsa dance classes would be starting, in the coffee shop, in "just a few minutes."  When we left the salsa was already in progress and Austinites in black t-shirts with band logos on the front were dipping and dancing with women in skirts.  We each shook hands and headed off to find our cars and return to our homes.  I felt like a tourist in my own town.  And it was good.  There are always more attractions to see.  And the price is just right. 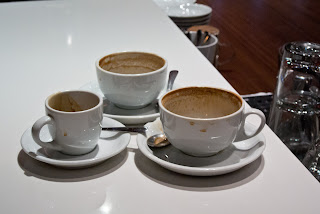 Funny to write about my adventures with the little Nikon.  Yesterday I was shooting portraits on black and white film with my Hasselblad and the 150mm lens.  The day before I was shooting still life with the Canon 1DS mk2 and a 90mm macro lens.  I guess I'm just destined to shoot "all over the map." But it sure keeps my job AND my hobby fresh. 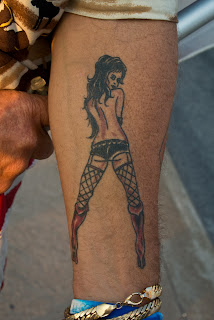 By the way, our protester with the "Occupy Austin" tattoo also sported this one.  I was thinking of getting one like this myself.  But my friends convinced me I should get a Leica tattoo instead.  I'm still pondering.   :- )

Final report on the Nikon:  I like it.  It's sharp.  It's no more or less infallible then any other comparable camera.  It does nice detail and has good color.  It's fast.  It's light and small and I can carry it all evening without a thought.  In all I think Nikon should do well with the new format.  It might not be the camera for you but.......it's not a bad camera.

Posted by Kirk, Photographer/Writer at 23:06 22 comments: