The Sony a57 Goes to School. 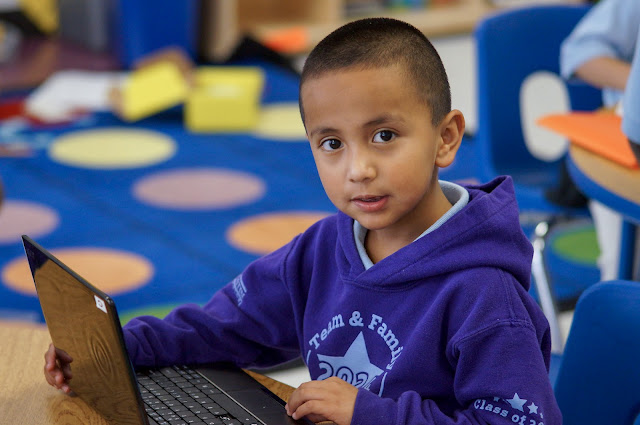 This is an available light photograph shot for Kipp Austin College Prep, a charter school here in Austin, Texas. I had an assignment there yesterday.  We spent most of the day photographing representative kids in their K-12 program. The images will be used on the web and for various printed collateral.

I was using several cameras during the course of the shoot but today I'd like to give my general impression of the Sony a57 as I just finished post processing about 650 files from that particular camera. (I shot around 2200 frames, divided among three cameras...).

I used a fast, wide angle zoom on another camera but I used only the 85mm 2.8 Sony lens on the a57. Having used the camera for several, previous, low light shoots I was confident using it at 1600 ISO which gave me a good range of exposure options as I moved through the various buildings at the school. I shot Jpeg.  I didn't have any issue with using Jpeg. In the past I usually shot raw but I've gotten into the habit of doing a quick custom white balance when I first enter a room and leaving the camera set there.  It generally means much less post processing after the fact since the color balance doesn't change or shift as it would in AWB as you point the camera at different scenes with different dominant colors and no real white references in the frame.

Unlike the a77, which has a superfine Jpeg setting, the a57 has only fine and normal.  I used fine.

The lens is a bit primitive in its AF construction. It's still using the little "screwdriver blade" drive shaft connected to the camera body.  But in any lighting situation where I can see to focus, it's pretty fast to lock in focus and it doesn't spend much time hunting.  I really like the performance.
In the scene above there was enough light to allow me to shoot at 1/320th of a second, f3.2 (one third stop down from wide open).

I think the bokeh (ha. ha.  I said, "bokeh") is nuanced and lazy, infused with echoes of plum and spices, blended for a nice, long finish, with hints of soft tangerine...  Actually, I think the out of focus areas are rendered softly and without much Sturm und Drang.  Whatever.  I think it looks nice in the parts that are out of focus...

While the finder in the a77 is better at previewing color and contrast than the a57 I found my routine white balancing exercise gave me the confidence to shoot even when the EVF showed colors to be a bit wonky.  If they were too wonky I would go back and re-do my WB.  Takes 15 seconds at the most.

When photographing kindergarteners it's always good to go in without much gear and without any flash.  The flash draws the kids like moths.

The Sony's also share the attribute of having fairly quiet and pleasant sounding shutters when the electronic first curtain is engaged.

As a lower tier camera, aimed squarely at entry level photographers and hobbyists, I find several things that I quickly figured out work arounds for.  The saturation levels for the standard Jpegs are much too high so I lowered them.  The metering (multi area) is not as accurate as the metering in the a77 so I either rode the exposure compensation adjustment or switched to manual, depending how long I'd be in one area. I didn't have much issue with highlights burning out and I routinely added back some black (+7) in Lightroom 4.2.

The benefits of the a57 are these:  It handles 1600 ISO to my complete satisfaction.  With menu modifications it is a charming Jpeg camera.  The standard files (with reduced saturation ) are very sharp at 1600 ISO and require no additional sharpening.  When correctly exposed the files have very nice, neutral color.  The battery life is good.  Not good like a Nikon D3s but much better than my Olympus EP3 or Panasonic GH2 and, just a bit better than my Sony a77's.

The camera is very light weight.  I'm familiar enough with my most used buttons that I am able to use the camera and set controls without having to take it away from my eye.

The camera is good enough, from a speed and quality of file point of view, to make a good, workable professional camera for someone who is thinking of starting a small wedding photography business or portrait business.  I am comfortable using it for professional assignments but confess that I'm working hard at using its bigger brother, the a77 for most things because I really like the "look" I'm getting by shooting very sharp and noiseless images at very low ISOs.
That camera is returning me to the kind of lighting I used to do with my old, medium format cameras, and that's not such a bad thing...

As far as I know the a57 is not waterproof or bullet proof.  It's just a fast handling, straightforward choice for people who prefer to "pre-chimp", shoot in low light and who want to use an EVF for most of their art or work.  It's a great back-up camera for the a77 but because of the higher quality of the a77 EVF the a57 is not a replacement for it.

Posted by Kirk, Photographer/Writer at 00:01 7 comments: