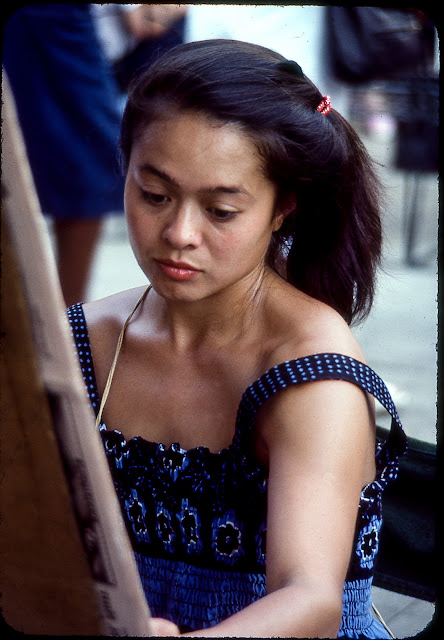 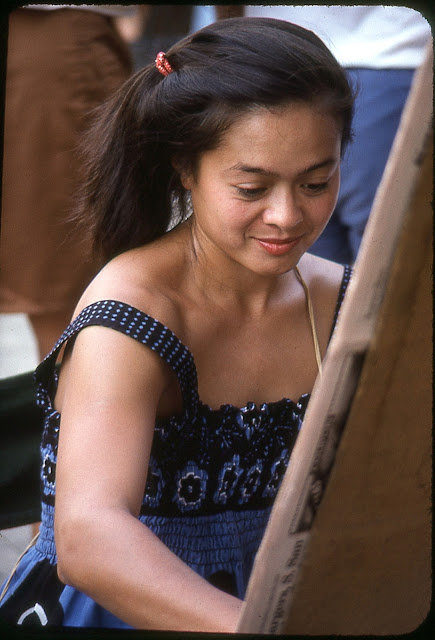 Scanned at 2400 DPI and reduced for the blog.

I've written often about my admiration for the original line of Olympus Pen-F and Pen FT cameras but I rarely show many photos from that camera.  One reason is that I long since gave away my dedicated film scanner and I didn't think the cheap flat bed scanner I used for everything else was up to doing scans of really small transparencies. The actual film size is less than half a frame of 35mm film.  I think that makes this ancient line of cameras the first real "smaller sensor" professional cameras.

Once Eugene Richards, a bunch of Life Magazine photographers and a few Magnum photographers adopted to the half frame, with it's very small and discrete form factor, the photo community at large didn't even try to start arguing about "equivalence" or the impossibility of doing professional work with small cameras.  Back then all that mattered was results.  And generally the images were judged for things like: content, timing, composition and juxtaposition.  Not ultimate sharpness and certainly not a camera's performance at a zillion ISO.  Maybe that's why they called the 1960's and 1970's the "golden age" of photography... It was largely done by impassioned artists and not geeks with the hots for working out the SNR on a graph.

I was cleaning up the studio this week, in anticipation of painting the walls, when I came across a metal case full of 1/2 frame transparencies.  Most of it is portraits of Belinda from the 1980's and Ben from the 1990's but there were a bunch of slides I shot in San Antonio that I always liked.  So I decided to give the much maligned flatbed a test run.  I tossed on the slide holder (holds four) and revved up the Epson Scan Software (runs with no hitches on OS 10.7).

The images above and below were all shot on some day in 1980.  That's what the slide mount says. That's 32 year old film technology in a small space.  I was pretty amazed at how well it holds up when scanned.  If I remember correctly I was using a standard FT camera with the 40mm 1.4 lens.  The meter had long since given up the ghost so I was dependent on guessing and conjecturing.  Which is kind of scary given the limited dynamic range of color slide film at the time. 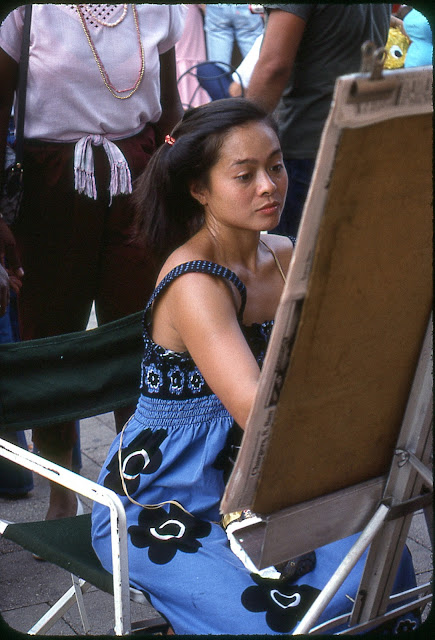 These informal tests tell me lots of different, unconnected things. First they tell me that, for around $160 new right now, the Epson V500 is a pretty darn good, all around scanner.  Just about perfect for the person who is knee deep in digital but still wants to tool around with film.  It tells me that the half frame format was capable of doing good service up to 8x12 inches for most uses. The lens seems sharp and snappy for something created over 45 years ago.

I can see that I was able to focus manually much better thirty years ago but I'm convinced it's a practice thing rather than whole scale disintegration so I'll keep practicing.

I'm not saying I hate digital or I'm only going to shoot film from now on but I would like to be on record as saying that someone could satisfy a big niche of the market by putting out a digital camera with only five controls on it:  Focus. Aperture.  Shutter Speed.  Color balance.  ISO.

All the rest of the stuff we keep getting is just bullshit to fill our minds with mush and make the process of taking photograph harder than it needs to be.  If we had fewer decisions to make we sure have a hell of a lot more concentration on what's in front of the camera.

And, to the smarty pants who will write and tell me how I can turn off all the unwanted items, I have to respond:  It's not the same thing as designing elegantly in the first place. 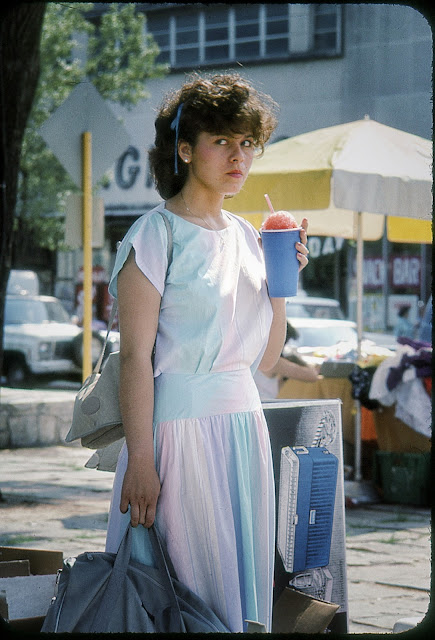 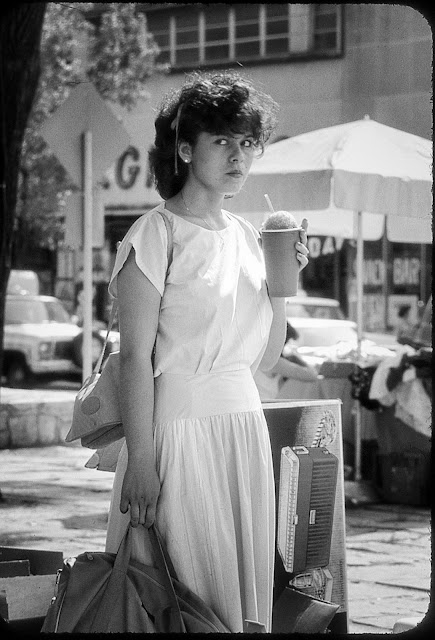 The black and white conversion in SnapSeed is not bad.

Posted by Kirk, Photographer/Writer at 18:11 14 comments:

Late in the afternoon, fishing at the old Perdanales State Park.

A few years back there was a magazine in Austin called, Texas Life.  It was a bold upstart that intended to go toe to toe with the heavyweights like, Texas Monthly.  They ran out of money and in a matter of months were gone.  But while they were rolling we did a lot of photography for them. At one point we did a fashion-y piece about the outdoor life in central Texas.  Fishing, hiking, taking a long swims in cool streams...that kind of thing. 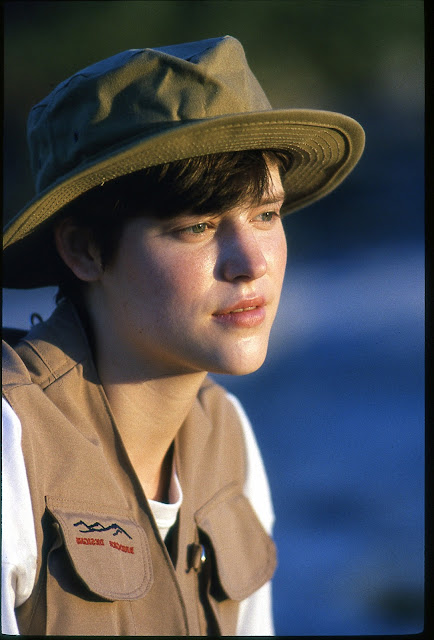 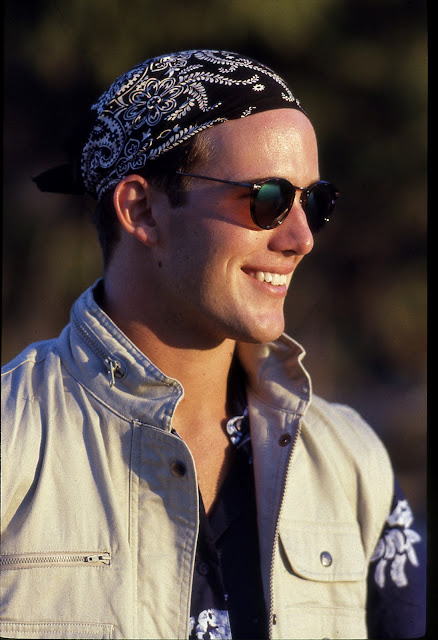 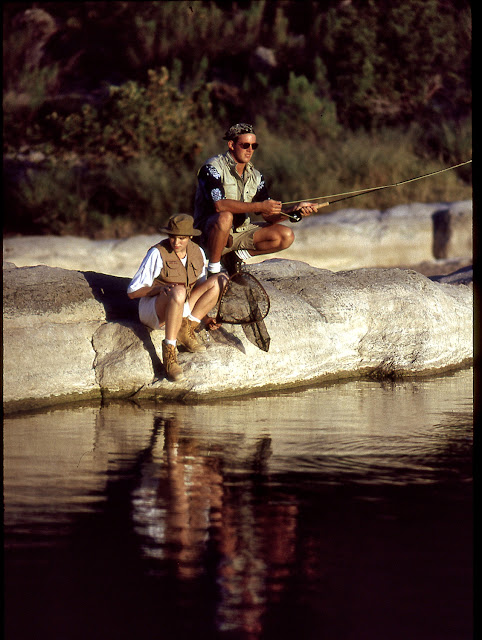 I photographed these two models using my favorite camera and lens of the moment.  A Leica R8 with a 180mm Elmarit Lens.  These are from e-6 slides scanned on the Epson Perfection V500 Photo scanner.  It's a different look...

The Leica R series cameas and lenses never got the press that the M series does.  Probably the more conservative and traditional body put it directly in competition with the much less expensive Canon and Nikon flagships.  Kinda tough to justify spending twice as much for the tool...unless they are better.
Posted by Kirk, Photographer/Writer at 13:57 10 comments: