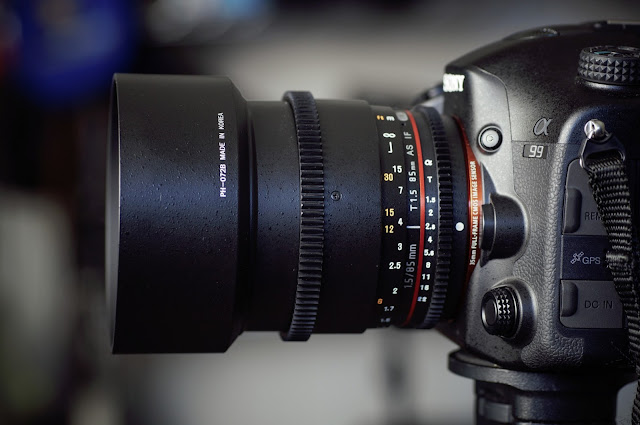 On Weds. of last week I had two different assignments that both called for the use of a medium telephoto lens. As I did post production on these two assignments I was able to look at about 38 minutes of HD video footage and around 200 still images that were created with the Rokinon 85mm t 1.5 Cine Lens. While the lens is sharp even wide open on the Sony a99 camera it's wonderfully detailed and sharp at f2.8 and at f4. But beyond sharpness there is also a bountiful and snappy contrast in the areas that are in focus that accentuates the nice and relaxed out of focus areas behind the point of sharp focus.

With the a99's full time live view set up changing apertures in aperture priority allows you to see the changing depth of field as you turn the aperture ring. The camera keeps changing the overall exposure to equalize the brightness of the finder view. It's kind of like magic.

With the push magnification button making sure you've nailed critical focus, getting your subject sharp is child's play.

At any rate I used the lens for a video project I did for Zach Theatre. It was basically a talking head program that I recorded using a two camera set up with the a99 and the 85mm R being the primary camera and another camera and lens combo at an angle as my secondary camera. The two camera system worked well. With focus peaking engaged the primary camera and lens combo, the a99 and the 85R, would allow me to make small, precise and smooth adjustments to focus as my subject moved. We shot the video with the aperture fixed at f 2.8.  I shot with the camera flattened out (portrait mode, minus 1 for contrast, saturation and sharpness) and added the overall effects needed to get the look I wanted in Final Cut Pro X. It's easy to sharpen but it's impossible to unsharpen.

That led me to think about the way I shoot and the lenses I currently own for the Sony cameras. Most of the lenses I bought were purchased back when all of my cameras were APS-Cs. While I have a lot of good lenses for the cropped frame cameras there are a few gaps when it comes to full frame. I have a couple zooms lenses that cover the 35mm focal length but when I compare their performance to the biting sharpness I'm getting from the 85 R I can see that they are not in the same ballpark. They work well for event stuff and just kicking around but I wouldn't be as comfortable using the full frame zooms for higher end advertising work.

I read a number of reviews and decided to go ahead and buy the 35mm today before the price changes (which seems to happen a lot on Amazon...). It should be here at the end of next week and I can hardly wait to put it through its paces. If it's as sharp as the 85 I'll have a real winner on my hands.

The versions that I've ordered and am ordering are the company's cinema lenses. As far as the optical formulas go they should be identical to their regular lens counterparts. The "cine" lenses have two main mechanical differences: The click stops have been removed from the aperture rings so you can set the aperture at any intermediate setting. The real benefit is that you can smoothly change the aperture to compensate for changing light while shooting video. The clickless nature of the ring means a much smoother transition and no mechanical noise during the shift. The second difference is that the focusing ring has gearing teeth that allow the lens to be fitted with industry standard follow focus devices that make shifting the focus with a subject in motion recording easier and more repeatable. As I understand it the throw of the focusing ring is also more linear which means that the same amount of rotation yields the same amount of focus change. Many lenses have lots of fine tuning capability on the closer side of the focusing ring but as you go into distance settings the transition gets quicker and quicker. The ramp gets steeper. Fine for quick focus in stills but harder to work with in motion.

Nothing about these changes hampers the lens's use as a still lens.  At $379 for a well reviewed 35mm 1.5 lens I'll take a small chance. Worse case scenario?  All the reviewers are dead wrong and the lens goes back.  Best case scenario? The reviewers are correct and the lens holds it's own (or is marginally better) than the $1600 competition and I keep my copy and wear a big smile on my face whenever I use it.

So, what's the trade off? If you are shooting a Sony a99 the big trade off is that you lose auto focus. The lens still works well in the A, M and P exposure modes. You get to do the hard work of finding focus. Given focus peaking and push button image magnification it's a trade off I'm happy to accept. But remember, I'm not a sports photographer or a photo-journalist. If you know you need AF you'll want to look elsewhere.

If you're overriding concern is image quality then the Rokinon 35mm 1.5 and the Rokinon 85mm 1.5 might be right up your alley. Once I test the 35mm and find it to be good I'll be biding my time, waiting for Amazon to drop the price on the 24mm. And either way I'll let you know what transpires. Korean optical revolution continues.

editorial note: in the hour since I ordered the lens the price shot back up to $549. Yikes. That was fast.