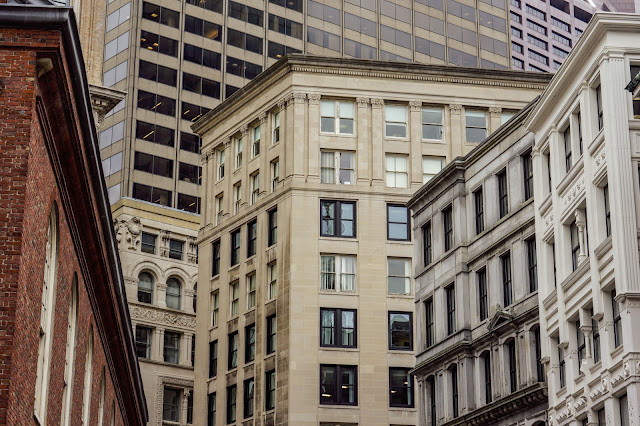 We've got a lot of open land here in Texas. Our buildings tend to be spread out. Most of our cities are pretty recent so we've got road that started as roads instead of horse paths. But wow! Boston has such a cool collection of buildings from various slices of history and narrow, twisty-turn-y streets. It's perfect for a bout of building stacking... 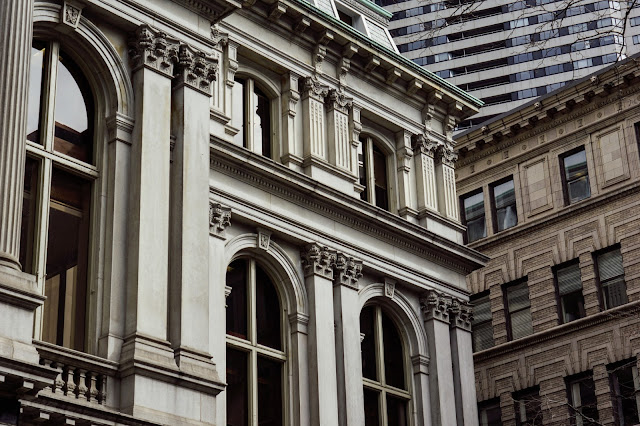 We were leaving Boston on Thurs. afternoon and we'd been all caught up in college visits for most of the week. The light wasn't great and the weather was freezing but I didn't want to leave before I got in a couple more hours of unfettered photography. I grabbed the Nex 7 and the 50mm Sony OSS lens, shoved an extra battery in my pocket and headed out of the revolving front door of the Taj Hotel, slipped across the street and walked through the park.  I knew what I was looking for and where I could find it. I was looking for something we don't really see in Texas. I call it time-travel-building-stacking.  The intersection of buildings from different eras in different architectural styles.  The buildings seem to cascade off into the difference almost as if someone grabbed a folder full of building images and went nuts layering them in PhotoShop.

The 50mm 1.8 OSS lens was perfect for this. A much tighter angle of view than most people would expect for shooting buildings made necessary by the desire to stack them. A wider angle lens would emphasize the first building and diminish the impact of the buildings behind it. A lens much longer than the 50mm on the Nex would be too limiting, giving me only small slices of the buildings and never really allowing more than two or three in a frame. 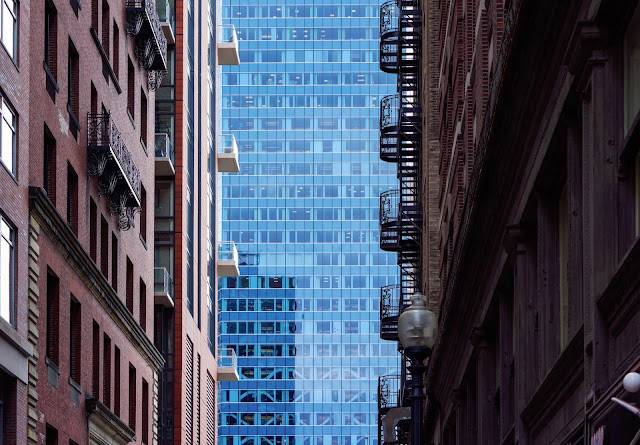 The EVF in the Nex worked to my advantage as I could see the relative tonalities while composing. I could make quicker adjustments (with instant feedback) to exposure and I knew when it might be smart to turn on the DRO for more shadow details.

Eventually my watch propelled me back to the hotel to pack and head to the airport. The city of Boston must be a relative heaven for people who are really into architectural photography. The little I saw of the city (how much can you see in a week?) made me want to turn around and head right back. A lot of wonderful stuff.

Posted by Kirk, Photographer/Writer at 13:30 5 comments:

The Reckless Camera Purchase. The Sirens of Tech Just Past. 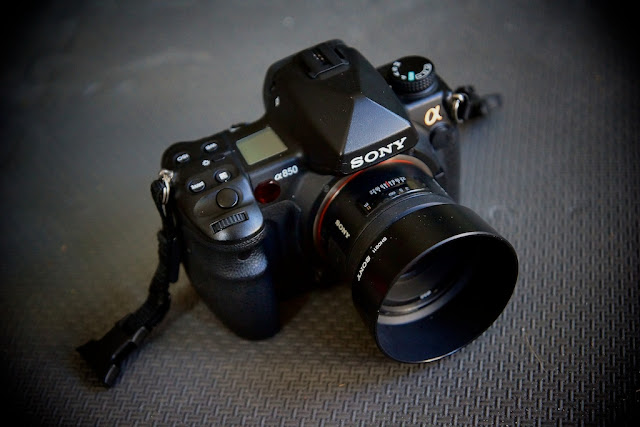 I like the new stuff just fine but there's some quirky part of my brain that's always looking out for cool cameras from the recent past. I always liked the idea of big, hunky, bullet proof Sony full frame cameras but the timing was all wrong. When they were launched I was deep into my Olympus and Canon journey. I noted them, thought the build quality and high resolution was neato and then filed the information away in some cobwebby part of my brain. Along with the formula for mixing up homemade Dektol and the directions to my favorite old restaurant (now a new high rise condominum).

As you probably know, somewhere in 2012 I took a left turn and bet it all on Sony. For the most part I'm happy with my decision. The cold, hard reality is that whether you shoot with a new Sony, Canon or Nikon the images are all very good. All the cameras are competitive and any one of the offerings from the big three are at least competitive with whatever else is in their class. But, as I've joined a "tribe" of camera-hood I feel duty bound to at least give my Sony's a nod of approval from time to time.

Logically, my love for the marque comes from the certain reality that, of all the current cameras in the world the absolute best from any company is, without any doubt, the Sony Nex 7. With the right lens in front of its sensor the camera is unbeatable by any other current camera; including any Leica or medium format digital camera. For handling and cuteness it makes the flagship offerings from Canon and Nikon look oafish and clumsy. Runs resolution and sharpness rings around all the other mirrorless swill and kicks dirt in the face of the new rabble of faux rangefinder cameras. Can you imagine preferring a Fuji X100s? Giggle. You can't even change the lens on that little toy.... So, rush out and buy Nex 7's while you can.  (humor alert: Kirk does not think the Nex7 is the only good camera on the market. Save your scathing rebukes for politicians or bankers....ed.)

With a bag full of Sony's premier platinum product at my side why would I want to go digging through the compost pile of cameras past? Hmmm. Interesting question.

Being a fossil in the photography world I actually am programmed to enjoy all kinds of stuff that really doesn't matter in real life. I'm programmed to want full frame cameras because that's mostly all we had in my formative years. Due to the effectiveness of marketing and it's slave, advertising, I've been demographically trained (male, over 40) to believe that anything made out of Magnesium Alloy or Titanium (aka: Boy Metal) is inherently more valuable than anything else. Even though I know better, logically, I've been battered into looking back at optical viewfinders to see if I was mistaken about the incredible value (to working photographers) of electronic viewfinders (I was not mistaken). And mostly I wanted to buy the Sony a850 because David Hobby, Zach Arias and Steve Huff all wrote about the beauty, charm and necessity of full frame cameras (or in the cases of Hobby and Arias, MF cameras) before they came under the spell of the newest Fuji fixed lens point and shoot tool, aka: the Fuji x100s.

There are many things to recommend the Sony a850 and the Sony a900's but developing raw files in Lightroom is not one of them. That bugaboo and the widely accepted view that their Jpeg engines aren't as good as the "big two" leads one on a epic journey to discover the ultimate raw converter solution for Sony's ex-flagship cameras. There are a few upsides. I like the built-in image stabilization. I like the idea of a simple menu, made simple because the cameras have so few "modern" features. I like the full-frame-i-ness, and looking through the uninformative optical viewfinder makes me feel just like a real, pro photographer.....from the 1970's.

Two things drove me to buy the a850. One is the fact that it's a black metal camera and no real man can resist black metal cameras. The second was the low, low used price which was barely above the price of a nice lunch for two at the Tour d'Argent (get the pressed duck). My rationalization was that it would be nice to have a back-up, full frame camera to pair with the Sony a99. That way two lenses could cover an assignment handily without having to make compensations and accommodations for cropped sensor camera backups.

Ah, the steps backward.  The howitzer-like shutter and mirror slap. The mute and uninformative viewfinder. The simple menu structure. The dedicated buttons sitting right outside for everything I normally use. The incredible dynamic range and color of the sensor when used at ISO 200-400. The wonderful color speckles and glittering white dots when used at higher sensitivity settings. Double the battery life of the DSLTs. And twice the weight.

Just a brief dalliance. But doomed for failure and regret as I'm currently using the camera all wrong. I have the Rokinon 85mm lens on the front of the camera even though there's no method of pre-judging actual sharp focus by zooming in on the image. I'm working in Jpeg even though DP Review was dismissive of the "jpeg engine." (Really? It's an engine? Seems more like just a software application to me...). And I even have the Jpeg thing all wrong. I'm using it in black and white mode and goosing the sharpness and contrast. Surely, I'll be plagued with halos around my highlights. I had no idea my highlights were so angelic...

Seriously though, aren't there digital cameras that you never tried but always had a hankering for? If you could pick one up now for pennies on the dollar don't you think it would be fun to try it out? I never owned a Nikon D1x but I was always curious. Same with the Panasonic L1. I always thought that was a sexy camera. I was very happy to have tried out a Canon 1DS mk2 for a while. It looked different, in its images, that later Canons. Not better or worse, just different.

So, today I'm tooling around with the a850. An absolutely reckless and unnecessary purchase. But maybe a lot safer than leaving my money is a European bank.  Have you ever succumbed to marketing from a previous age? Do you have a Leica M3? In your quest for new and powerful have you considered old and eccentric? Might be the ultimate hipster statement: vintage digital.

Posted by Kirk, Photographer/Writer at 10:17 23 comments: 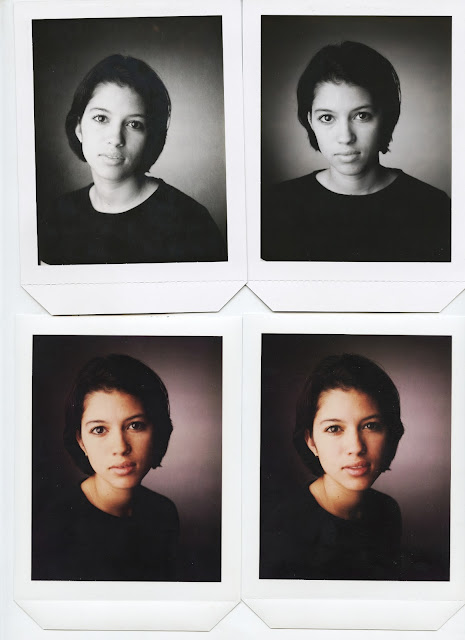 I loved the process of shoot portraits on 4x5 inch sheet film. It always seemed so...serious.

We'd start out shooting black and white Polaroid to get the look and feel of the lighting locked down.

Then we'd move on to shooting a few color frames to see if the addition of color changed the graphic design of the shots.

Once the subject and I were happy with the final color Polaroid I would grab a stack of film holders and we'd get down to business.

After the last frame was shot I always felt sad. I never wanted to stop taking photographs.

I found these images in a box with hundreds and hundreds of other Polaroid test shots.

It made me stop and re-think my current practice wherein I get everything set up and then we spend some time shooting and chimping until I get everything zero'd in and then I start to shoot in earnest. I think I'm not spending enough time up front to get everything right before I start. I'm depending to much on the digital ease with which iterative corrections can be made as we go.

Next time I shoot I'll test more at the start and then shoot fewer frames during the shoot. But with more concentration.

These were done with one of my old Linhof TechniKarden cameras and the 250mm Zeiss f5.6 lens that I loved. It's amazing what one finds upon opening mysterious little boxes.

Posted by Kirk, Photographer/Writer at 00:30 8 comments: