I sat at my desk and ground my way deeper and deeper into Final Cut Pro X. Boy is my brain exhausted. 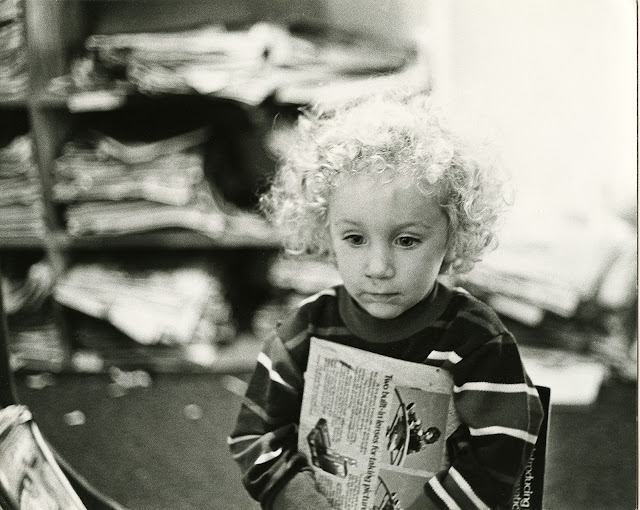 Small child at Half Priced Books, many years ago.
Back when cameras did bokeh without having to be
instructed to do so.

I sat down around 10am today to start editing what turned out to be an eight minute video for my sculptor friend, Marja Spearman. She's the artist who did the 1,000 Forget Me Knot ceramics for an installation at the end of last month. I wrote about her in an earlier article...

I had a huge stack of video clips with lots of Marja on camera explaining the project and talking about the challenges of working with high quantities of ceramics. I also had good clean "footage" of mini-interviews with her three collaborators. In addition to that I had lots of what they call, "b-roll" which is really just extra stuff you shoot so you have material to use when you get bored of seeing "talking heads" for too long.

But here's the deal, unlike a good still image that may need to be cleaned up or given the ole PIZZAZZ filter in PhotoShop, video demands that you take charge of telling the story to your audience and, hopefully, keeping them interested.

I put down a well reasoned story line and used a bunch of the interview footage then I went back and added b-roll as frequently and strategically as possible. I color corrected each clip using the waveform monitor and the vector scope and then I went into each clip and equalized the sound.
It takes forever. I couldn't find any background music that I liked in my usual sources so I opened up GarageBand and spent a couple of hours composing my own. It's not wonderful but it's 16db down from the voice tracks to it's hardly more than colorful white noise. But, of course I wanted to go in and modulate the music to come up over parts of the dialog where there were pauses and dead air.

I was feeling pretty good until Ben got home from high school. He cruised into the studio to say, "howdy" and to check out what I was working on. I may have mentioned it but he's got two years of film classes under his belt and works on FCP X nearly every day. He's soooo much better at editing and video story telling than me. He offered to critique the project and we rolled. He didn't even wait till the end before he started "helping me" fix it. He had me shorten it by a minute and a half, add more b-roll, make the cuts quicker and lots of other little tweaks. When he finished with his critique I felt like the project was a solid B+. I learned a lot doing my own editing and my own music bed. Learned a lot from my younger mentor. And I learned that video is a process and not just an inspiration followed by a little bit of post production filtering.

In all, a humbling experience but not without its own light at the end of the tunnel.

Next time I'll stop acting like a photographer and put a lot more movement in the shots. I won't always crop as tightly. I'll get more second angle in interviews. But the one thing I got just right was the music. Thank you, GarageBand.

Now I understand what my video friends mean when they tell me that 90% of a good project is in the pre-production. Amen.

You probably know what I want in a camera. But it doesn't exist on the market right now. I'd like a camera that's set up like a Leica M. Simple controls and simple menus. I don't want an optical finder or rangefinder but I'd like that window on the top left to have a 4 million pixel element electronic viewfinder. I'd like a camera that only shoots raw. Not that I have anything against Jpegs but I'd gladly give them up if I could have an ultimately simple menu interface. Color balance, format, view options. That's about it. I don't need a screen on the back. With a great EVF I could do all the reviewing and menu setting I would ever want. And not having a screen on the back might give me better battery life and a more indestructible machine.

I want my camera to be black. Not shiny black but matte black with a slight texture over all.

In the guts of the camera I want a full frame Foveon style sensor, made by Sony. I like their sensors. And in my ultimate camera there would be four ISO settings: 25 ISO, 100 ISO, 400 ISO and some vague setting that would just be called, "High."

The camera would have built in image stabilization with all the bells and whistles that Olympus have wedged into their IS in the OMD EM5 and the new EP5.

Finally, the entire exterior body shell would be made of real, thick, glorious metal. The kind that shows as brass through the wear areas after years of hard use.

So-----what would your ultimate camera look like. What functions and features are important to you?