Sunday walk on Monday with an old favorite combo. Well, not that old... 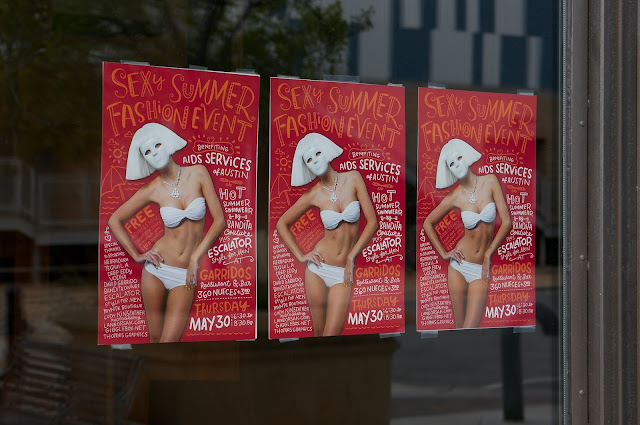 Poster in the window at Garrido's Restaurant.

File the top image under: This is going to be fun...  I recently did photographs for Garrido's Restaurant's website which you can  see here: http://www.garridosaustin.com/ I've had a great time discovering different fun things on their menu and I would say that they also have one of the best happy hours in town. But on Thursday, the 30th of June, their marketing consultant is taking things up a notch, albeit only for one evening. They will be hosting a "Sexy Summer Fashion Event" as a fund raiser for Aids Services of Austin. It will take place from 6:30 to 8:30 pm and it should be a lot of fun. Just imagine a hip, downtown Mexican/Fusion restaurant, with a big, long patio and lots and lots of very beautiful young models walking through in various swim suits. Dinner, drinks and a head start on your beach wear shopping all at one go.

I don't usually go in for this sort of spectacle but.....I think I should grab one of my cameras and head over there. Just to document the event for the owner's, of course...

I shot the image above yesterday afternoon. I'd spent the morning cleaning out the studio office. I've been tossing out all kinds of crap that I will never need again. Like the notebook of invoices from 1998 which showed me just how precipitously the slide of monetary return of traditional photography has been in the ensuing fifteen years. I made the mistake of looking in the book and the associated ledger. I was shocked to see that we'd done 168 jobs in that year and our assignments took us to three other countries over the course of the year. By comparison we counted up just 60 photographic jobs last year (2012) and for far less income. But such is life. Thank goodness for book revenue and now, corporate motion pictures.

It was purging to toss a bunch of the past because looking at the past is about the least productive thing I can think of. But the accumulated weight of all the stuff I wanted to toss, both physically and mentally, became overwhelming and I had to take a break and take a walk. I never pass up the inclination for a good walk...

I was going to take a different camera but I brushed against an open drawer on the equipment cabinet and looked down into the Sony Nex drawer. There sat the cute and most proficient looking Sony Nex 6 camera festooned with it's shiny, silver 50mm 1.8 lens. I grabbed it and an extra battery and headed to the car. 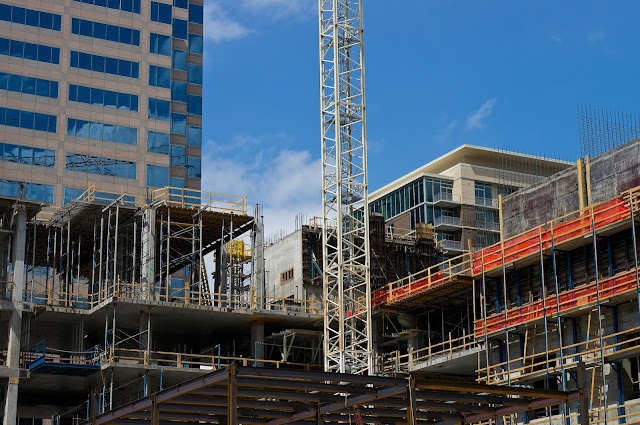 Yet another new hotel comes to Austin. Right on Congress Ave.

I think it's funny that I spend my weeks shooting images of people and walking people through video interviews but when I head out the door to shoot for myself I'm nearly always drawn to shooting unpeopled landscapes and city views. Maybe the prevailing ethos in Austin now is the moving of dirt and vertical longing... 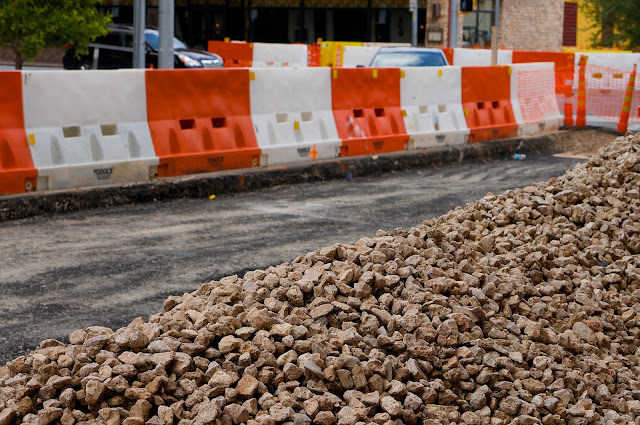 A river of rocks. On the way to the convention center.

It is amazing to me to think that I've been walking down these streets with a camera in my hand since 1978. Nearly 35 years. In some notebook I still have old Tri-X negatives of a much smaller and much scruffier downtown. Pre-gentrification. Nothing really open after nine or ten in the evening and the Stephen F. Austin hotel and the Sheraton at First and Congress Ave. were the only downtown hotels. Then the bars came, then the banks and finally the giant office buildings, and, in only the last few years, the gigantic residence towers.

We went from free parking everywhere to valet parking or the endless ramps of the $20 parking garages. And when I walk through the city with my camera in my hand I see myself in the reflections of the buildings. And I've aged with the city but no matter how much I try to re-invent myself I'll never be able to make a transformation like downtown because I won't survive the endless demolition. But on some level I don't think I've changed; it's just everything around me that forgot to honor whatever pact we might have had to stay the same. But even that is silly.

It's not just the cameras that changed it's also the things we point them at....

This will sound shallow and politically incorrect but I have to say it. People don't look as good as they used to. I've looked through old slides of political protests and music festivals and life in the streets and I compare the way people looked back then with the same situations today. The majority of people have become enormous. Just enormous. Easily 30 to 50 pounds more than the average thirty five years ago. Their bodies have little definition and their faces are puffy and indescript. And people's clothes have become uniform and boring.  It's almost as if the more popular our city becomes the more people default to the kind of clothes we used to wear to change the oil in our cars or mow our grass in, but now it's standard, everyday wear.

It's hard to make beautiful photographs if everyone looks like they just ate two dinners and got out of their pick-up trucks in the Walmart parking lot to head in and shop for wardrobe. Don't get me wrong, there are still people in Austin who run, swim, bike, eat vegan diets and hover around the perfect BMI for their body type but as the population expands so do the majority of the people. Tough times for photographers looking for classic beauty... (no picture supplied). 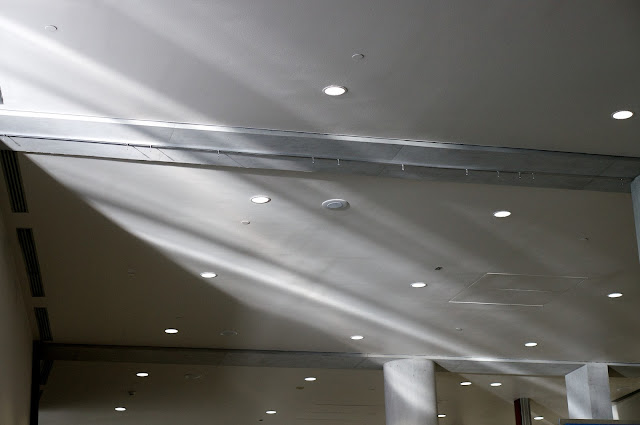 Light beams across the ceiling.

But some things seem eternal, like the light beams playing across the ceiling in a public building, the grafitti and the clear blue of the Austin sky after days of thunderstorms and wind... 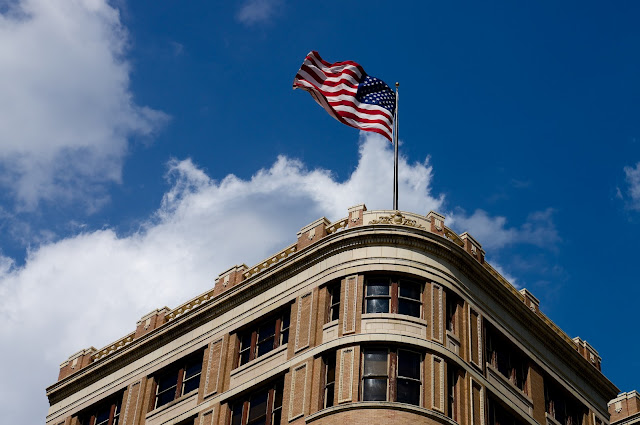 The Littlefield building was looking spry and patriotic on Memorial day. And the flag was whipping in the breezes.

This afternoon, with momentum left over from yesterday, I emptied one Craftsman rolling tool cabinet and took three film cameras and two digital cameras to the Goodwill electronics drop off. Hadn't used any of those cameras in five years and don't know when I ever would again. Then I dropped off the rolling tool cabinet. And some lamps. And a couple older, battery powered LED lights. And the more I got rid of the more space I have to move around the office and make things more comfy. 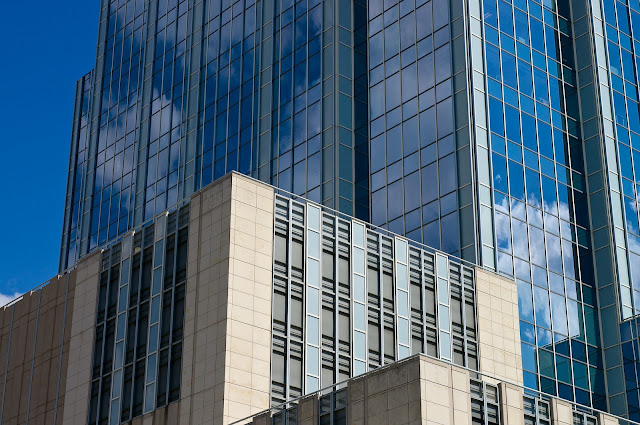 Once again, the Frost Building. I shoot it because I like it but I post it because it pisses off one particular guy in the U.K. who thinks Austin buildings suck. Maybe true but they're all we've got. 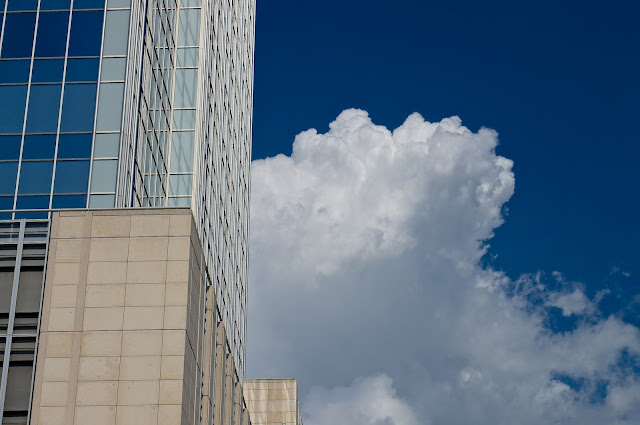 All in all it's good to make more space for yourself. Fewer things to inventory in your mind. Fewer impediments to change. 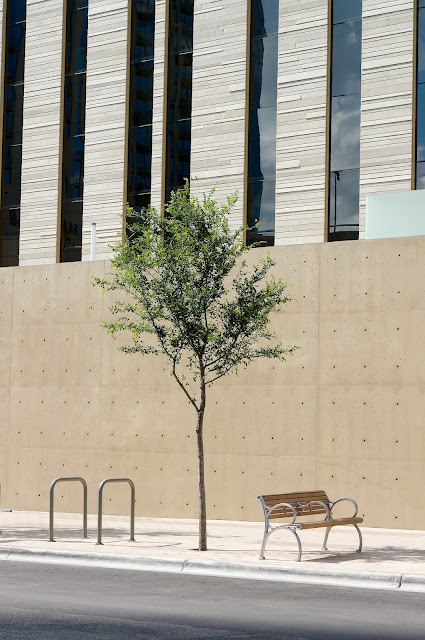 Posted by Kirk, Photographer/Writer at 17:06 8 comments: