In the process of getting my presentation together I happily run across a forgotten magazine cover. Proof that there is a profit motive for photographing beautiful people. 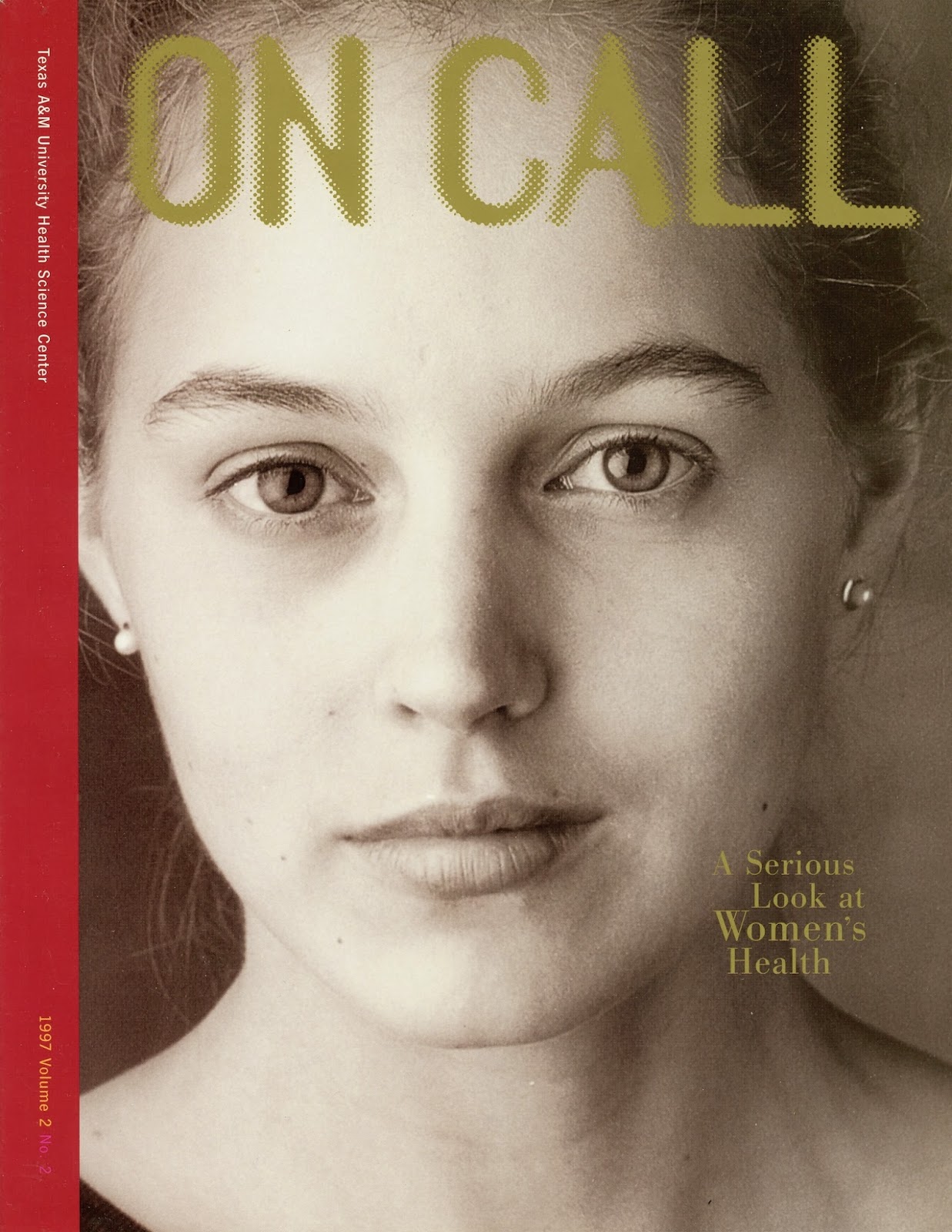 This is a magazine cover we shot back in the 1990's. The art director for this medical magazine called me and asked me to make a nice photograph of an attractive woman. I had someone in mind and made a call. We did a quick shoot with a very large soft box and a 35mm camera loaded with AgfaPan APX 100 black and white film. I selected a frame while I stood in the darkroom watching the film dry and I printed it a couple of hours later. I sent the art director an 11x14 inch fiber print. He loved it. ( the image above is a reduced sized scan of a printed cover ).

Interesting that we worked without a committee construct and approve a layout. We worked with minimal input from the art director. The input consisted of, "please give me a vertical."
We didn't need to send contact sheets back and forth. We didn't need to scan or e-mail or share on Dropbox. There was no retouching. No sharpening. No skin smoothing. And everything worked out fine.

Is (camera) happiness a moving target? 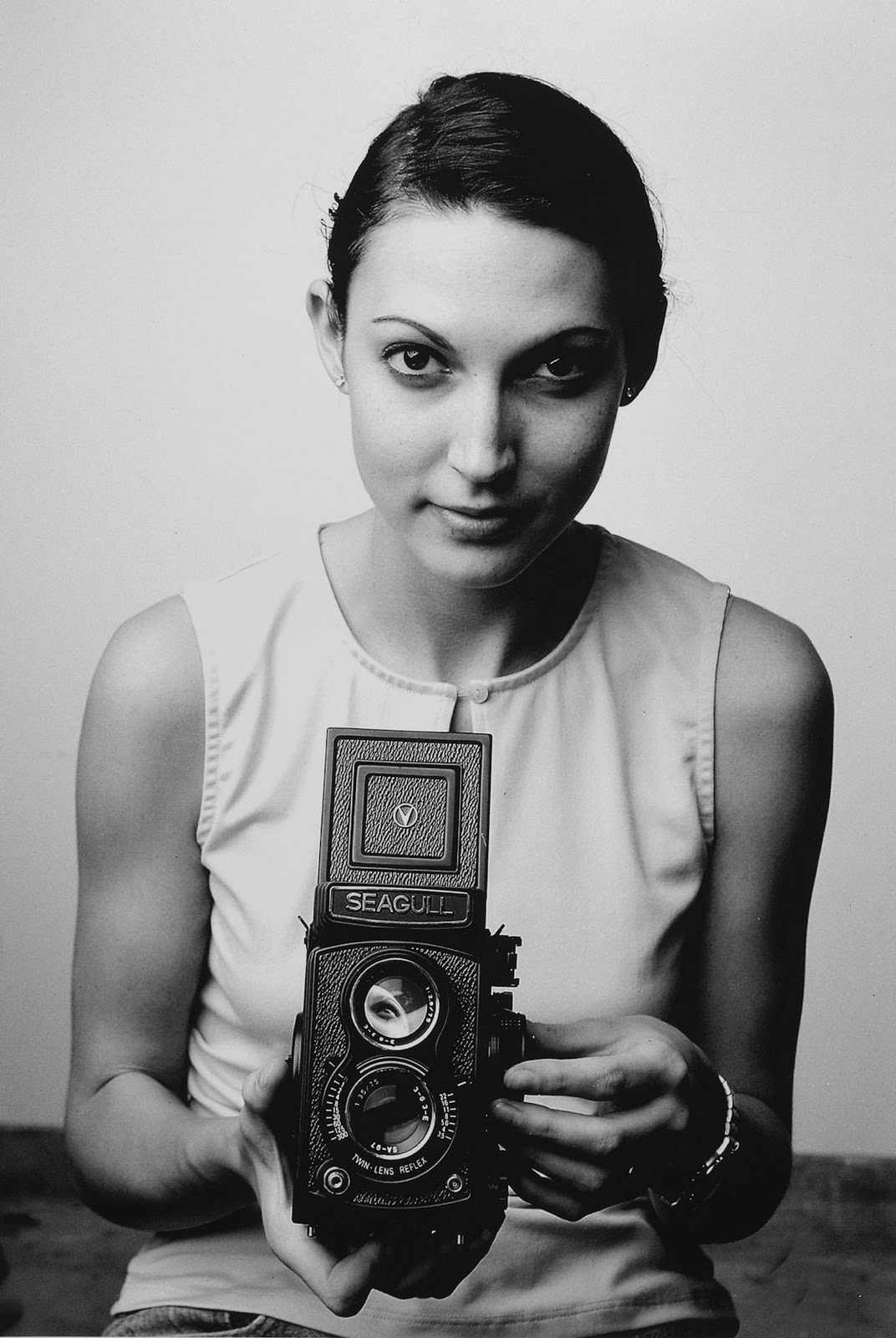 It's funny, I'm trying to write a speech to give on Friday for hundreds of high school photographers and their teachers but I'm more or less lost. The gulf between the way I started in photography and the way they started in photography is so wide. We started in a culture where, for the most part, we had to search out good images. We had to subscribe to magazines. We had to buy books. Learning the visual/art part of photography was like belonging to a secret club where we passed along the names of the new stars of the medium like recipes or treasure maps. Certain books that were anthologies of photography were like sacred reference books to us, they opened up windows to new work.  And every technique we used was either gleaned from a magazine about photography or passed along by a more advanced practitioner who would take time to personally train an aspiring photographer. We dug for knowledge and we dug for images. We even had to dig around and listen to the grapevine to discern which cameras and lenses to buy.

The generation I will be speaking to is part of the first inclusive Google generation. Need to know which camera has the best high ISO performance? There are 20,000 or 20,000,000 sites to choose from. And they all would love for you to drop by.  Want to know how to do Astro photos, time lapse, off camera flash, fashion, video interviews, make your own camera strap, clean your sensor, find a model or figure out which camera has the most haptical knobs???? There's a quick Google search for that. Or a Bing! search or whatever.

Wanna know who's trending hot as a fashion/sports/news/war/hipster/wedding/baby/glamor/food photographer? Likely if you've read a camera review one time anywhere on the web you are already being inundated by sites filled with links and stolen images from the "next big thing." How does someone who started as a indigent field hand in the business explain anything to a spoon fed generation and find any sort of connection at all?  I guess we'll find out by Friday....

But today I want to talk about the cameras and art. I've given up. I've come to grips with the idea that I'll never be free from desire where cameras are involved. I'll never be happy to work with just one bundle of black plastic metal and fake leather. The desire for more and different is insatiable. But why? Why can we control how much we eat and how much we drink and bring to bear all the impulse control it takes to save money and work on long term projects but we can't seem to resist the call to arms when the shiny new camera is launched? How many of us took one look at the new Fuji and thought: "Pre-Order!!!!" ????

How many of you recent purchasers of the OMD EM-1 are already getting itchy for the EM-1A? And how many Nikon dF owners are already wallowing in post cognitive dissonance and getting ready to sell at a loss and move on to whatever Nikon tosses out there next?

I'm temporarily lucky when it comes to full frame cameras. I like my Sony a99 well enough and I like the lenses I have for the system but Sony fucked up the A7/r so handily that it deflated my reflexive need to rush out and upgrade. Now my choice of full frame camera is also being vindicated by its selection by Hasselblad for "improvement" and chic-ification. So I needn't even consider making any big moves.

But seriously, I'm starting an exercise wherein I line up all the digi-cameras that grace the vault at the VSL world headquarters and each day I pick up the next one in line and shoot it all day long. Then I put it in the back of the line and the next day I pick up the next one in the front of the line and shoot with it. I calculate that I can go twenty days or so without repetition so we'll see if it's boredom that drives these purchases or what.

I suspect it is this: A new camera is presented and it has a new combination of feature sets. My brain starts to think about the feature sets and comparing them against what I shoot right now. On paper the new camera has attributes that trump the existing camera. I convince myself that I will be able to do better work if I have the new whatever. I buy the camera and find that I use every camera in nearly exactly the same way. This effectively neutralizes whatever I bought the camera for in the first place.

I bought the Sony RX10 because I read the specs and thought how wonderful it would be as a small, light but powerful video camera. I would be able to run and gun in exciting and fast moving situations and return with powerful, kinetic video. Then, in the course of a few weeks I settle into the way I like to shoot and find myself locking the camera down on a slider or a big tripod and plugging in microphones and doing some nice lighting. I have just gutted any advantage that the camera might have presented to me.  I can do the same thing with one of the GH3's with more control over the quality of the video files.

I bought a Sony a99 because I thought I'd be doing more low light work. I also bought some fast lenses. But I've found that I use it mostly in the studio and on locations where I have total control. Why? Because that's the vast majority of work I do. I would be just as happy shooting most of the work with the older sensor in the a850. If only it had an EVF........  But the idea that I might want to shoot in low light was enough to turn my craving into ownership.

There are situations where cameras can make a difference but not as many as we need to convince ourselves exist. But there is something about the eternal promise of new gear performance that drives us on to purchase. I'd like to pretend that it wasn't this way in the film days but I know we were only saved from ourselves because the product cycles were so much longer. Besides we could always look to cryptic improvements in film emulsions to give us a short term fix of "new and shiny."

On some level I know that the gear acquisition is just a form of resistance aimed at us by the evil forces in the universe to keep us from actually getting started or following through on the work we'd like to be doing. The work we see ourselves doing.....If we only had that one piece of gear that might knit everything together. ---

I re-found a new excuse to buy gear. It gives me more to write about. How sad is that?

So, are the changes being made in cameras really things which will make us happier photographers? Do wi-fi and touch menus and programmable buttons really make our lives so much better? Does the ever repeating menu learning curve outweigh the new features? Does the financial opportunity cost outweigh those extra two points on the magic DXO scale?

Don't look to me for answers I have the sickness as bad as the rest of you.  (and yes, before you comment I know that you are a rock of logic and still shoot with your camera from 2001 and the lens you picked up in high school. And I know that you are unmoved by any new camera bling. You must have clicked into the VSL space by mistake...good for you).