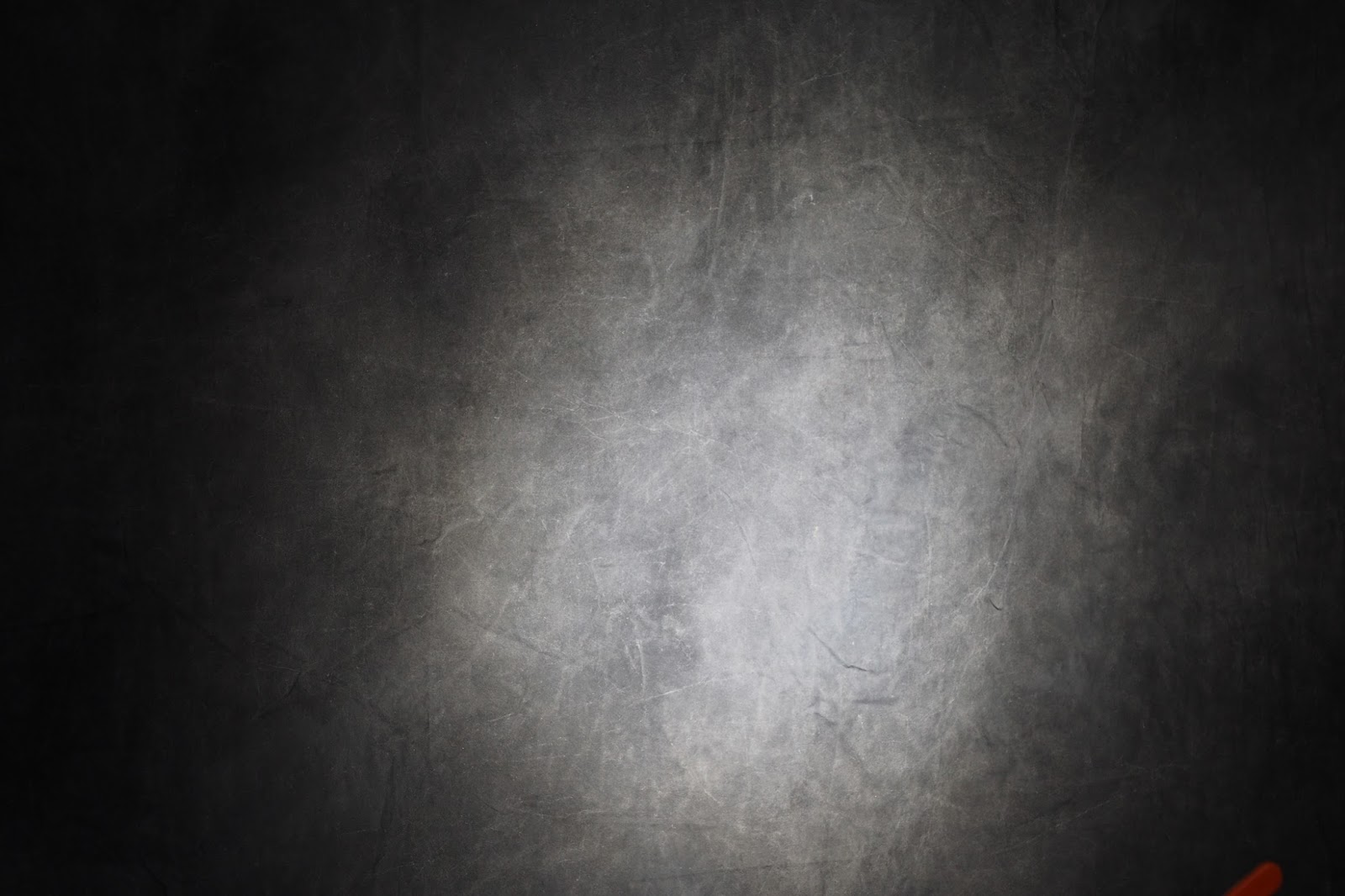 People agonize over where to put the "main light." Then they agonize over fill light ratios (very "last century..."). They get all fixated about hair lights but what they should really start with when designing the light for a portrait is the background light. The damn thing anchors every part of the photograph.

I don't like flat backgrounds. They work for some projects and, when the client brief calls for a white background it really does behoove you to make the light distribution across the span of white as flat as a pancake, metaphorically speaking. But dark backgrounds are a whole different thing.

When I'm getting ready to do a portrait my first big decision is, "What do I want the background to look like?" Once I decide that I get to work. For a recent session with my friend, Fadya, I knew I wanted to use my crusty, old gray canvas backdrop. It's appropriately laid back and neutral. It never competes with the main subject. I also knew that for a single person portrait I would want a circle of light that went from higher intensity in the middle and progressively fell off to the sides. The image above is a starting example. In the final images the edges aren't as dark as they are here because I've added a main light and even when it's flagged there's still a higher level of illumination that tends to fill in the dark shadows a bit.

The biggest concern for me is how the edges of the light circle look and how gracefully they fall off into the surrounding tone. I hardly ever use a bare light in a reflector because the edges are too sharp and to abrupt. Sometimes I'll use a small source covered with diffusion and it works but the fall off to the edges always depends on the power output and it's not as easy to control the look in smaller spaces. I prefer using either fresnel fixtures or grid spots.

I don't own any fresnel fixtures that do flash so the default for flash is the grid. I have four strengths of grid: 10 degree, 20 degree, 30 degree and 50 degree. I use 20 in all but the biggest rooms where I might have the luxury of moving all the lights far apart from each other and far apart from the components they are lighting. The further away the lights are the more natural they appear because of the more protracted fall off they give over distance. I usually drag the 50 degree out in the smallest rooms where the background is very close and we need a quicker spread of light to make the same circle on the background. I hope that makes sense.  Grids are good for flash but I prefer the immediate feedback of fresnel lensed fixtures that pump out continuous light.

A fresnel is a glass with concentric circles designed into it. Most are on the front of spot lights. The combination of the internally positionable bulb inside and the collimating nature of the fresnel itself gives a wide range of possible spot diameters in a single package. It's like magic. It's light magic.

I love being able to put a fresnel behind a subject, aim it into a background, adjust the beam width and have a perfect background light. It's so fun and easy. The edges of the fresnel spot are as soft as those of grid lights, maybe softer. The elegant transition from hot light to soft edge adds something wonderful to the aesthetic nature of a portrait (or a product shot).

The single downside is that most spots are not controllable when it comes to output. If you use a "pot" (potentiometer ) to turn down a tungsten fixture the light gets redder and redder as the voltage drops, instantly giving you a mismatch with your main light (and a less color accurate light sources; lower CRI).  If you can't move the light back away from the subject (in this instance a background) the only other way to control it is to introduce something between the light and the subject to reduce the illumination. But putting just anything in the middle can mean that the light is wholly influenced by the intervening material. Opaque diffusion just softens and spreads the light uncontrollably.

In the movie biz the lighting guys solve the problem with "nets" and screens. Metal screens, similar to the material used on your window screens is used right in front of the fixture (directly on or within a few inches of the front surface) while nets are used in place of scrims inches or feet from the front of the light. Used correctly they diminish the strength of the light without changing its character. That means that the hardness/softness of the light doesn't change much and neither does the spread of the beam.

Here's how I solved the "over lit" background issue in my recent photo shoot: 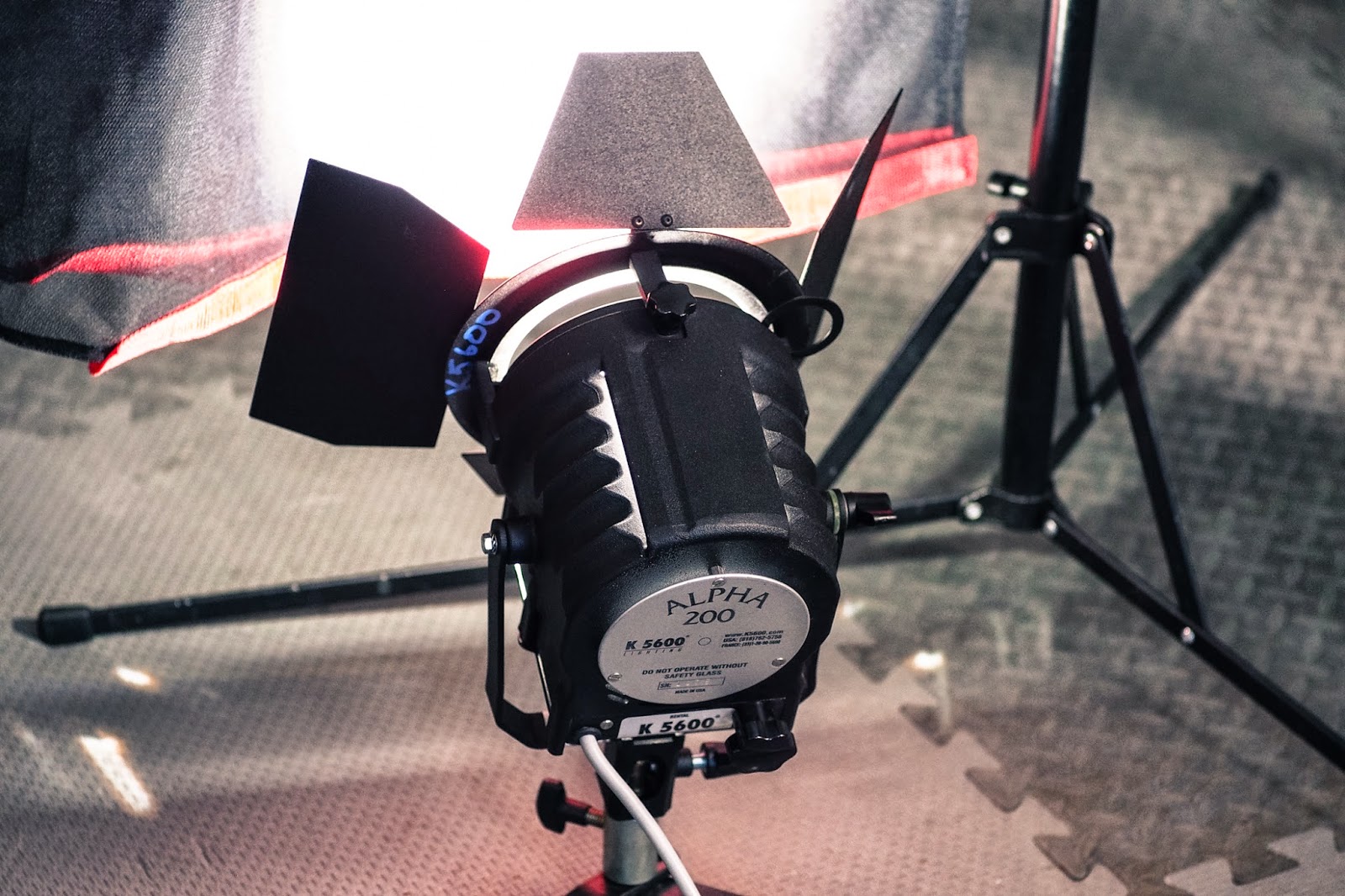 Here's the fresnel fixture that lights the background. I'm careful to keep the barn doors out of the light path so they don't cast hard shadows at the edges. I have a Westcott fast flag directly in front of the light. In fact, I have doubled it to get the level down where I want it.
Light on loan from K5600 lighting. (200 watt HMI). 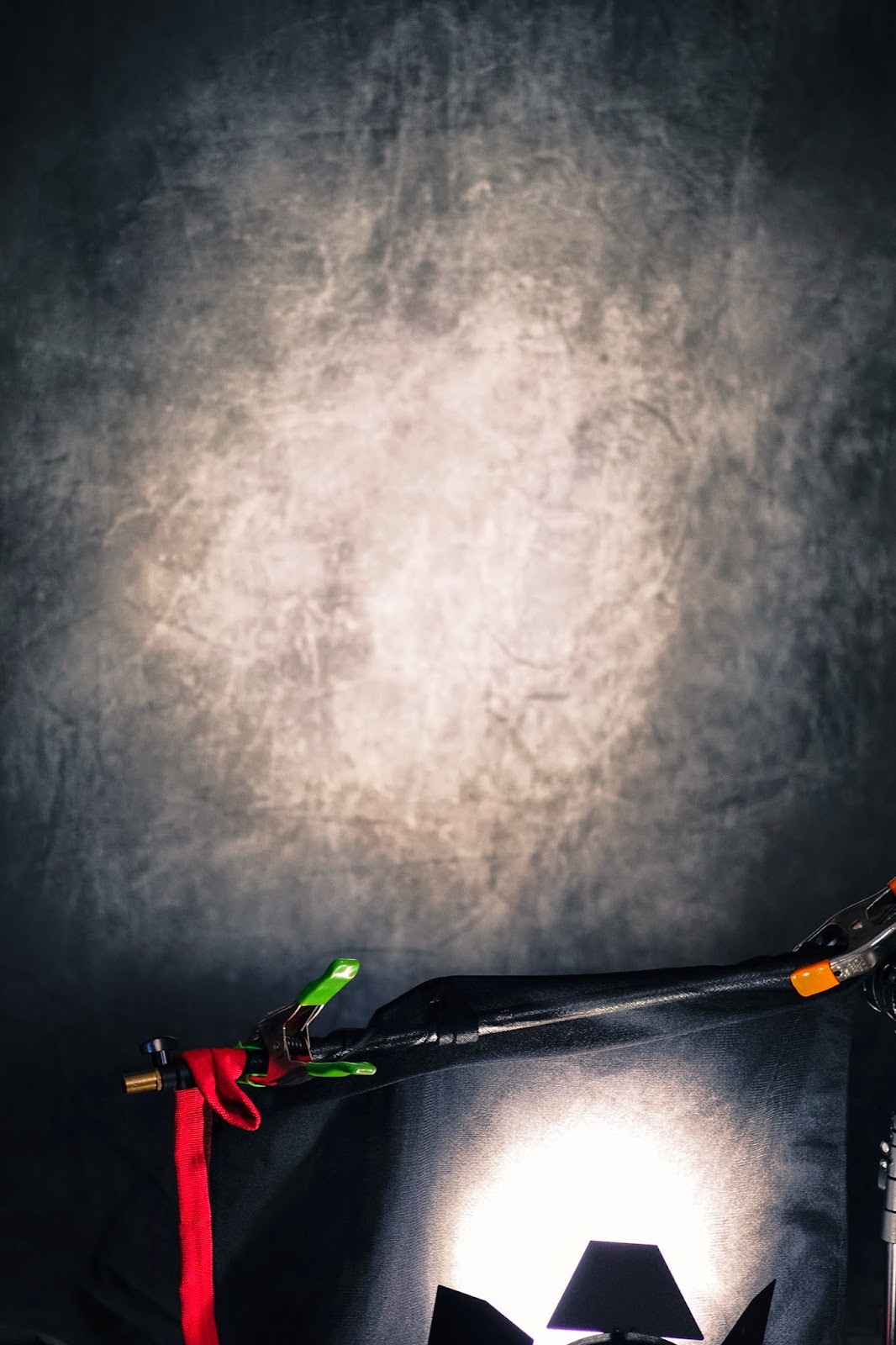 Here's another view of the light shining through the net which is supported on a small boom running about a foot in front of the light. If the net is too far from the light and too close to the subject there's a risk you'll see the pattern of the net. But you can see this as you are setting it up.
If it happens you need to put the net closer to the light source.
Just be sure that if you are using tungsten you don't
use the light too close to a plastic or nylon net. It might start to smoke
and it's always a bummer when the sprinklers go off......

Posted by Kirk, Photographer/Writer at 14:25 7 comments: