The winning lens at yesterday's shoot? A dinosaur optic that continues to be just right. 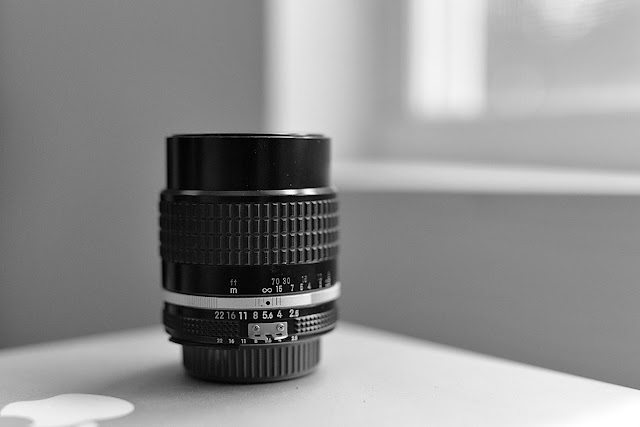 Shooting portraits has been the mainstay of my business for many, many years. I'm not picky though; if you want me to shoot some landscapes or buildings for an annual report I'm happy to oblige. If you've got some sort of process that needs documenting you can count me in for that as well, but the bulk of what I get hired for is portraits.

And like most photographers who have come to this business from other professions I suffer with issues of self-confidence. After all, there's no formal licensing, no tests to pass and no real rules that regulate how we go about doing our work. It's highly subjective. You eat by making images that get approved by clients. You get the clients by doing your marketing right.

But most of us consciously or sub-consciously think that having the "best" gear gives us an advantage over our competition (even though we all have access to, and end up buying pretty much the same basic inventory). I know from talking to lots and lots of guys who either do photography for a living or love photography as a hobby that most of us are looking for magic camera bodies and lenses that will give us a leg up on everyone else. Super-charge our vision. Leave the less well inventoried in the dust. How else do we explain the ability to rationalize the $4000+ Zeiss Otus lenses which offer a bit better quality, wide open than lenses that cost half or even a tenth the purchase price? Especially when experience shows us (time after time) that we're stopping down out of the need to get enough depth of focus, most of the time. And we're pretty sure that the wide open advantage of the most precious optical systems generally evaporates compared to more pedestrian lenses as we hit the well used range of f4.0 to f8.0.

Being an anxious person who is largely self-taught in photography I have all of the problems with self-confidence that most other people struggle with. Maybe more so than beginners because I am only now coming to grips with just how much I don't know...

So I rush to buy the cool optics. And the cool cameras. Sometimes it actually pays off. The Nikon D610s and D810s actually make beautiful files that have everything a working pro could want: lots of good detail, low noise and crazy good dynamic range. But most of the time it's a crap shoot.

I've recently bought a Sigma 50mm Art lens and I must tell you that the images generated at it's widest apertures just smoke everything else I own. I keep trying to use it on jobs but I keep finding out that the wide open performance is, for the most part, a chimera that goes unused in day-to-day work. I tried to use it at the theater on Tues. but it was just not a long enough focal length. When I did use it I could easily see that the limited depth of field at the money apertures was nowhere near enough to keep two actors, separated by just a few feet, in sharp focus. We need f5.6 to do that.....

I tried to use the lens in a shoot yesterday that consisted of environmental portraits but again, it was too short. Even my very well regarded Nikon 85mm was a bit short to corral the background in just the right way. All the fast f-stops in the world are more or less meaningless if the focal length isn't right for the shot. I guess you could crop your frame but....

The lens I keep reaching for is probably the cheapest lens I've paid for in years. It's the Nikon manual focus, 105mm f2.5 ais. Yesterday I fought and fought to use the 50mm and the 85mm but the 105mm kept floating back and solving my need to create shallow depth of field while keeping cluttered backgrounds at bay. The perspective is just right for portraits. I mean just right.

I've always been a bit nervous about using manual focus lenses on DSLRs because the cameras aren't really set up to manually focus well. I worry that the green confirmation spot is too generous, too willing to say "yes" when the real sharpness is saying "no." I got burned by the focus shift of the "vaunted" Zeiss 85mm f1.4 (MF) on the Canons when I shot with them. The image would always look good in the finder but when I looked on the computer screen it was obvious that a small bit of stopping down shifted the focus back too far. It was a nightmare.

Since I read too much on the web and I hear so often how much better current lens design must be I am always inclined to believe I am leaving some quality on the table when using older lenses. Especially older, manual focus lenses. Without the latest miracle glass and massive computational design assistance how can they stand a chance???

Well..... I shot so many images with the 105mm yesterday just because it was the right angle of view for the vision I was following. I got home and started zooming in to 100% to make sure I had nailed focus and I marveled at how sharp the lens was at f2.8, f4.0 and f5.6. It gives away nothing to the Nikon 85mm f1.8G lens at any aperture and if there is a sharpness difference between the 105 and the Sigma art lens at f4.0 I sure can't see it. Get the focus right and this $125 used investment really brings home the visual bacon.

I seem to be having a recurring epiphany. It goes something like this:  Older lenses were perhaps more carefully made and more painstakingly hand calibrated, and even with older designs they can perform as well as the newest optics, especially when both are used two stops down from wide open.

The real reason I like the 105mm is that this is the angle of view at which I feel that I have control (total control) of what is in my frame and how it's all arranged. Some lenses just speak to you. This one says "hello" while for my money something like a 28mm never says much more than "Doh!"

Final observation? The 105mm plays well with the green focus confirmation dot in both of my D610s. Nice.
Posted by Kirk Tuck, Photographer/Writer at 11:42

When I started taking photographs in the 70's the 50mm f1.4 lenses (and f1.2) were objects of desire. It never really dawned on us that we were using our lenses at f5.6 and down (by that I mean the traditional notion of smaller aperture) until someone borrowed 1.4 lens. It was then we noticed that we didn't like the shallow DOF in many cases and were stopping down anyway.

I also remember that the photo magazines of the day said the primary argument for getting a fast lens was to facilitate focusing in dim light. Thus your FLASH picture would be sharp.

You would also like it on the EM5ii, with the ISIS it's so easy to handhold and I am an elder with jiggly hands. I picked up a couple preAi 105s and love them. The older model, pre multi-coating, focuses effortlessly and is incredibly sharp. One might neglect the lenses which were made for "larger than m4/3" such as the Nikkors, but I also have gotten excellent results with Mamiya 645 lenses on the Olympus.

I keep putting this 50/2 that's only a little younger than I am on my D3100, where it is a nightmare to use, for very similar reasons.

I have very fond memories of this lens, though I don't own one right now. A few weeks back I bought a D800 (my first Nikon in 10 years) and have been shopping for an 105 off and on since. I agree with you on portraits - the 105 or 100 length really works for me. And to me the Nikon 105 just has a really nice look.

Reading the other comments reminds me, I still have my FD 100 Canon here in the office attached to an m4/3 adapter. I guess now I need to pick up a Nikon to m4/3 adapter.

Kirk: I'm writing from Zambia as I sit on the bank of the mighty Zambezi River. Rough life. Anyway, I've been putting my new Fuji XT-1 through its paces and so far I'm pleased. Easy to use, beautiful JPG's and plenty of detail, etc. Before I left for my trip, I picked up a used Nikkor 300mm f4.5 IF-ED for $349 in pristine condition, a ;lens I often wanted years ago, but couldn't afford at the time. After using it with my $29 adapter, all I can say is "Wow!". Sharp, crisp, with beautiful color rendering, it even focuses easily in good light on the Fuji. And, amazingly, I'm enjoying manual focusing, despite its obvious limitations. Anyway, maybe I'll pick up the 105 just for fun. I think my cousin has a pre-Ai she'd sell me, come to think of it!

I have always been a fan of the 105mm Nikkor and used to use it frequently on my old Nikon F2 and Nikkormat. Since I am using the Sony a7, I bough an inexpensive adapter and tried out the 105. I also have a Minolta AF 100mm f2 and have found that I much prefer its rendering to the Nikkor. I also have a Contax G 90mm f2.8 that I go to more frequently that the Minolta simply because of its diminutive size.

Thank you for jogging my memory. The 105mm Nikkor was once the only lens I had for a Nikon F--great lens. It also puts in perspective a dilemma with which I've been struggling. I am a longtime Leica user, my second youngest lens, a 35mm Summicron having been purchased by me, used, in something like 1984. My most recent acquisition, also my most "exotic," is a 75mm APO Summicron f2, reputed to be one of Leica's "best" lenses. Unfortunately it flares in some backlight situations to the point of unusability, often has too little depth of field to be useful for close portraits and I find myself returning to a 90mm Tele-elmarit f2.8 that I've had since sometime when Nixon was still president. I love that lens, and while I can't bring myself to divest myself of the 75mm, it now sits in a drawer.

So, new isn't always (often?) better. Hmmm...Maybe I should look for an old 105 Nikkor in Leica thread mount...and I've already got an M-adapter...

This is one of the three lenses (all AIS Nikkors) I use all the time on a Nikon Df. I just returned from a trip through Northern France with the one body and a wide, normal, and the 105. These aren't flashy, but work splendidly.

Returning to this combo from AF & zooms was like coming home.