I've talked about my Studio Lighting course at Crafsy.com but I wanted to let you know that I also did a course that's great for beginners... 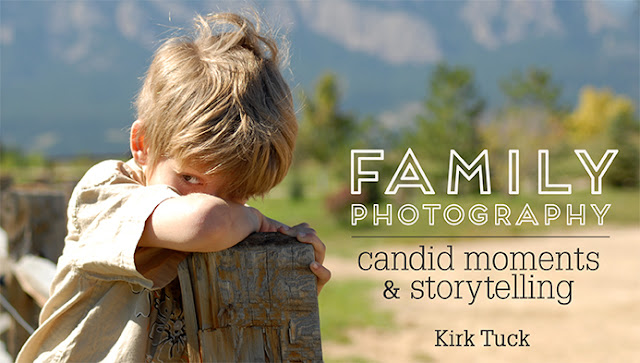 A course about the basics of making great family photos.
Half price link!

I have a lot of friends who have a lot of basic questions about photography. And I know a lot of parents who wish they knew their way around cameras and could take better family photographs. The kind of photographs you end up putting in albums and saving for years.

With that in mind the producers at Craftsy.com and I put together a two+ hour course that walks newbies through everything from camera settings to the basics of using speed lights. We shot on location with a family up in Colorado. We even spent an afternoon at a horse ranch working with the kids, the horses and the great outdoors.

If you are a beginner or your are surrounded by people who are always asking for basic advice when you would rather be waterskiing behind your own personal submarine, this may be a course for you or one that you can recommend to get yourself off the hook.

If nothing else, think of the entertainment value of making fun of the instructor.....(hmmmmm).

I'm offering a link that makes the course half price. If you watch it and don't like it the folks at Craftsy will cheerfully refund your $$. The course is online and can be watched by you as often and for as long as you desire. You could watch me explain "ISO" hundreds of times a week if you wanted to.... All for the price of about five extra large, fancy coffees from Starbucks. And less fattening.

Although you will doubtless come away from watching with the niggling feeling that a bit more gear would be good.

This is the link. Please consider giving it a try!

Thanks, Kirk
Posted by Kirk, Photographer/Writer at 17:58 No comments:

OT: It's Friday Afternoon and the City of Austin is hosting SXSW and President Obama Simultaneously. Hmmmm. Traffic? 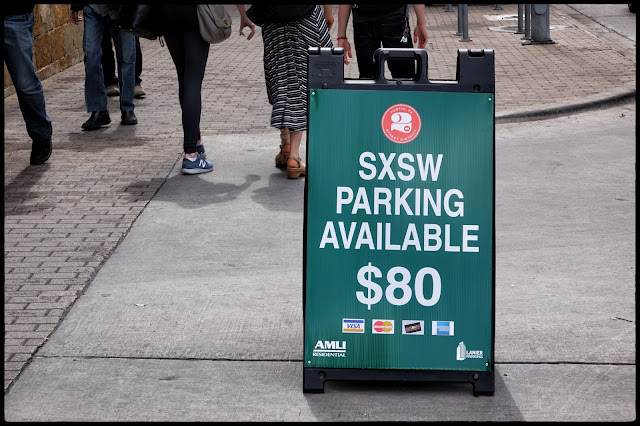 A sign of the gentrification of an aging conference.

What can you say about a city that routinely cancels all schools at the hint that temperatures might drop below the freezing mark and some ice may form, somewhere? We love to panic and we panic well, and at the drop of a hat.

About mid-week it dawned on most Austinites that this Friday (today) we would have the official start of the world's largest combined music, film and technology festival and that the keynote speech to kick the whole thing off would be given by the commander in chief of the most powerful country on the face of the planet, right in the middle of town. Right in the middle of the afternoon.

The hew and cry on Facebook was tremendous. Maps were posted showing all the road closings. Even the major highways (already the third most crowded in the country) would be closed to accommodate the motorcade. People were predicting that the typical five mile commute time on the Mopac Expressway would balloon from forty five minutes or so to five or six hours. People began hoarding cool, frozen food from Trader Joes and fresh craft beer from Whole Foods Market.

The mayor of the city actually went on all the local media and begged the citizens of Austin to work from home; for their own safety and convenience. State and city offices closed at noon today in a desperate attempt to avoid CAR-MAGGEDON. So, President Obama cruised in around one o'clock and hustled over to the Palmer Auditorium to give the keynote for the conference. Next stop after that was a closed meet and greet at the Austin Music Hall and he will be following that up with a super private fundraiser at someone's home in the posh, Tarrytown neighborhood. Air Force One should be "wheels up" by 8:15pm and I hope the air traffic returns to normal so we can pick up our own arriving V.I.P. (Mr. Ben Tuck) at the airport tonight at 10:30pm.

This being the capitol city of the reddest state in the country it's only natural that the aficionados of "open carry" (sporting around your "long guns" and your holstered .44 magnums) chose today to march through the same downtown streets to celebrate Texas's embrace of the new "show off your guns" law. One that will allow kindergarteners to bring their own fully operational Uzi's to school for show and tell. The same law that, I think, also allows convicted felons to bring their weapons along with them to prison. Anything less would, of course, be an abrogation of their second amendment rights. But I digress.

I pointed out the gun march to draw attention to the fact that there was more security downtown than one could imagine. In fact, I haven't seen this much protective firepower since .... ever. And, of course, as a sometimes writer of spy fiction I just had to go downtown and see the rich pageant for myself.

Whole city blocks were cordoned off in anticipation of Mr. Obama's arrival at the Austin Music Hall with giant, city owned dump trucks blocking crucial intersections. Everyone in a uniform had the familiar bulge of a kevlar vest under their shirts and walkie-talkie earbuds in their ears. There were snipers on the roofs of the surrounding skyscrapers and federal agents with K-9 commandos patrolling all the alleys and sidewalks around the cordon. Helicopters filled the air like drones at a topless beach.

But there were the usual lapses so readily apparent to anyone "blessed" with hyper-vigilance disorder. The cops glued to their iPhones inside their air conditioned squad cars. The cops facing inward, toward the "principal" instead of facing outward toward potential threats. The democratic party operatives bending admission rules to venues because they "recognized" someone and brought them through the lines; even though they weren't on lists. And all the cops with their faces glued onto their iPhones --- but wait, I think I already said that. 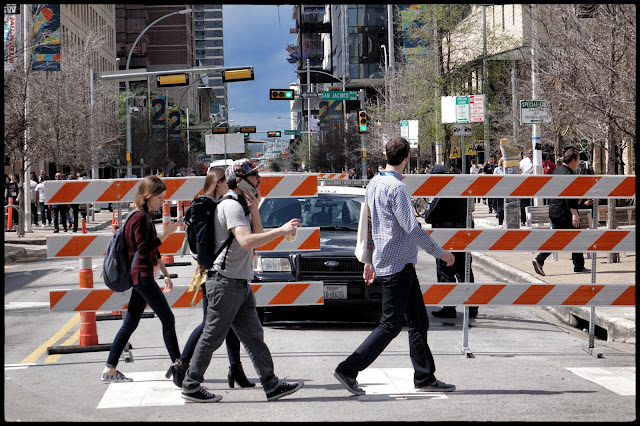 Half the streets were blocked for the president, the other half were blocked for guys and girls who
truly believe that their idea to make an app with styling tips for unfortunate dressers
will sweep the marketplace and make them the next Zuckerberg.

Here's the funny coda to my afternoon of observing the mix. Everyone took mayor, Steve Adler, at his word and stayed home. Or at least out of downtown. The roads were totally clear when I headed down to Whole Foods for the two meat BBQ plate (at least as good as Franklin's and, no line!). I had my choice of several thousand parking places (which has not happened in Austin since the crash of 1986). And the only people walking between the bank towers and residence high rises were the congenial tourists here for SXSW. You can tell who they are. They have on skinny jeans two sizes too small, they don't know how to tuck in a shirt tail, and they like to wear hats that we generally never see in Texas. And sweaters. And lumberjack shirts.  On the way home I drove 90 mph and ran all the red lights because I figured that every cop within a hundred miles was camped out "protecting" the president. Or at least getting some overtime pay while firming up their training on Kandy Krush. Well done, Austin! No CAR-MAGGEDON. 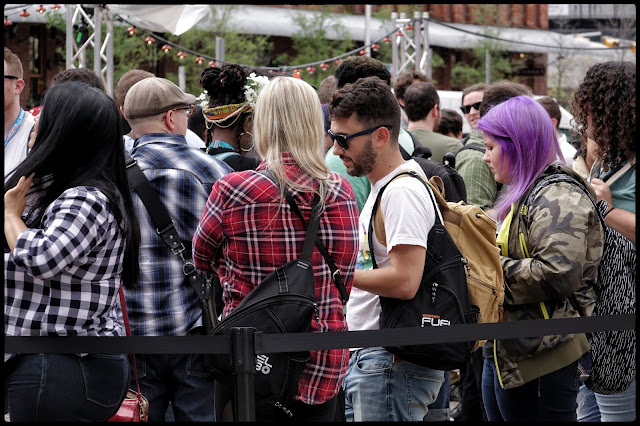 This is a place where new arrivals to the city can practice our new, popular pastime;
Waiting in lines.

I took along a camera but I didn't get much shooting done. What's the use of a middle-aged, middle class guy taking photographs of middle class young adults standing docilely in lines. I'll wait for next week when the clarion call of "Free Beer" and such echoes through the concrete canyons and the bikers show up. Add some rappers and the mix gets much more visually sweet.

Did some mischievous demigod let all the air out of the balloon of excitement for conferences or has SXSW just discussed everything to death over the past few years? I'll go with option two. How many times can you hear: DISRUPTION and INNOVATION without your brain getting angry?

My investment for the future? Neck braces for an entire generation who have spent their lives with their heads bowed, as in prayer, worshipping the droll messages bouncing across the screens of their phones! I'm going long on neck braces.

Hope you had a hip Friday. Wave to Air Force One if it flies over. I will.
Posted by Kirk, Photographer/Writer at 17:22 4 comments: