I was trying to remember the first MF digital camera I reviewed. It was for Studio Photography Magazine in Sept. of 2008.

I thought it would be fun to look back at the state of the art nearly nine years ago...have a read.
(link to original with photos: http://www.imaginginfo.com/print/Studio-Photography/Leaf-AFi-7/3$4159 )

Here's a link to my review/article of an early Phase One camera from January 2009:
http://www.imaginginfo.com/print/Studio-Photography/An-Enhanced-Medium-Format-Digital-Camera-/3$4670

And here's a link to my review/article of the Mamiya DL28 from that same year: http://www.imaginginfo.com/print/Studio-Photography/Mamiya-DL28/3$5017

It was fun reviewing cameras for Studio Photography Magazine. I'm glad the work is still up on the web. It's part of our history of ever changing digital cameras... They also published the article about Minimalist Lighting that sparked my first book project...

Posted by Kirk, Photographer/Writer at 19:47 No comments:

I finally got my website, KirkTuck.com, up and working. Endless tweaks and additions to come... 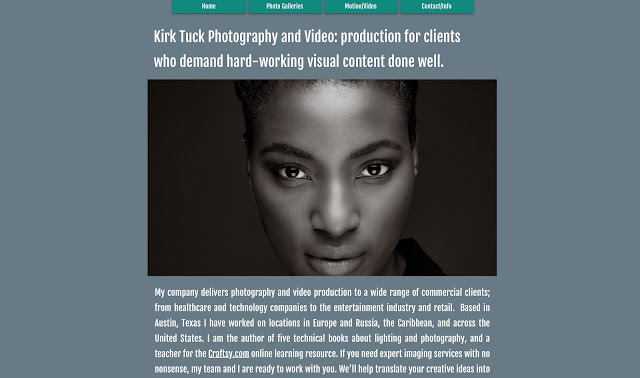 I wanted to update my site for a while and when a project got cancelled I finally got the time I needed to dive in and work on it. My old site didn't have any video samples on it but half our income in the last year has come from shooting and editing video so I wanted to remedy that gaping hole in my marketing.

I used a program for Apple Computers called, Sparkle, to do the design and production work. I still need to work on sorting out the photo galleries a bit but I'm now distracted by some scriptwriting that's calling my name. I'll keep tweaking but I wanted you to see how everything turned out...


Posted by Kirk, Photographer/Writer at 15:42 9 comments: