It's fun to create many portraits over several weeks for one client. They want a consistent look and feel while you get the bonus of..... 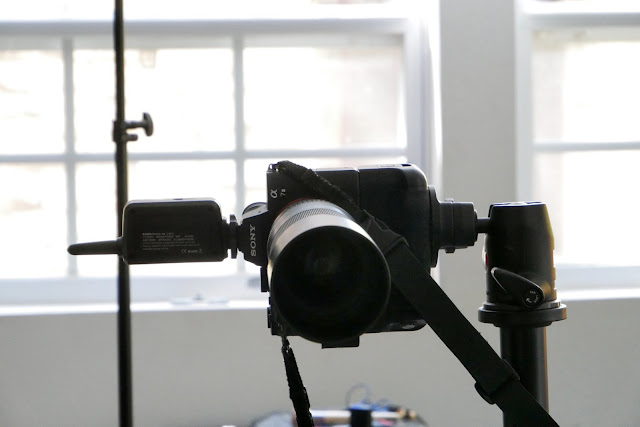 ...having to straighten up the studio and do the lighting design only once. We've been working on making portraits of new doctors for a medical practice here in Austin. As the new doctors come into town they go through their indoctrination and get up to speed while the marketing staff at the practice get to work putting together their bios, speaker packets, web pages, etc. To do so they want good portraits that can all work well together with the 100+ portraits of practice partners we've already taken over the years. Everyone's schedule is different, and in flux, so there's no chance to do a series of portraits in one long day. We set up individual appointments for the convenience of the physicians.

As luck would have it there was a nice and almost constant stream of new doctors so far this month. Five in the last week. I was able to do a big clean and organize before the first session and I also had time to really fine tune the lighting I've been using. When it's time to do a new session all I need to do is to go around the studio and turn on flashes. I pop a fresh memory card in the camera and format, double check the settings and the meet the subject at the door with a smile and cold bottle of water.

I mentioned in an earlier blog that I was going to work with small flashes for a while and see just how much I could do with them before making a final decision about whether or not to get rid of the final "dinosaur" mono-lights I still have lurking about in big, black cases. I've wound up using a total of four battery powered speed lights to do my latest batch of portraits. It's a comfortable way to work and I never realized what a big relief it can be to get all the power cords up off the floor. Now there's a lot less to trip over and the studio space looks neater. 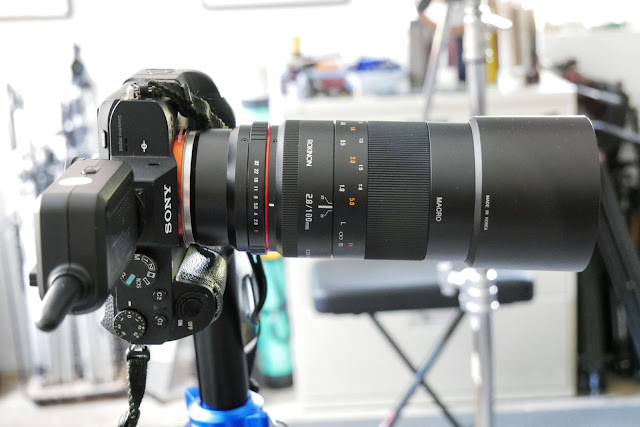 I chose the A7ii as my camera for this series because it has the an optimized file size. The raw file is 24 megapixels, I shoot the files as compressed raws and I find there's tons of detail information of which to take advantage. The lens I chose is the Rokinon 100mm macro lens because it's exactly the right focal length for this project. The combo works well together and the focus peaking has helped me to nail sharp focus on every single shot. 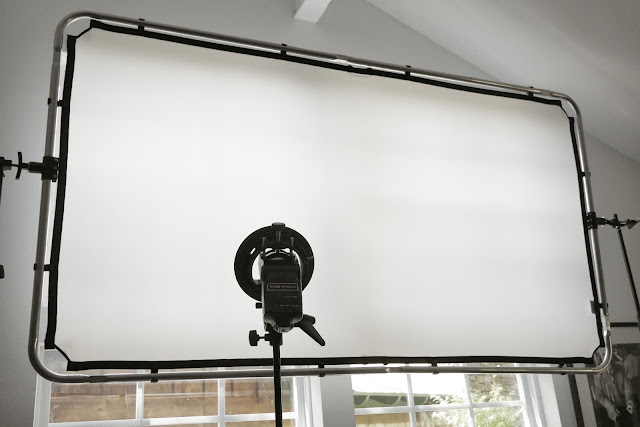 I had this 4x6 foot Lastolite diffusion panel laying around the studio and I could never figure out where to store it. I noticed that this bank of window (usually right behind camera position) gets direct sun in the afternoon so I finally decided to just put the panel up so the bottom is about six feet from the floor. It diffused the sunlight nicely but it also works, in conjunction with a dialed down flash, as a nice fill panel for commercial portraits. I'm leaving it in place permanently...

I've been using the fill panel just above as a fill light for every single portrait. I have the flash dialed down to 1/32 power so the effect is very small but it's enough light to ensure that we don't drop shadows to pure (no detail) black. I leave it set up in the studio for those times when I want to grab it and take it outside and diffuse sunlight for environmental portraits. It's a pain in the ass to set up so I now consider it permanently constructed. 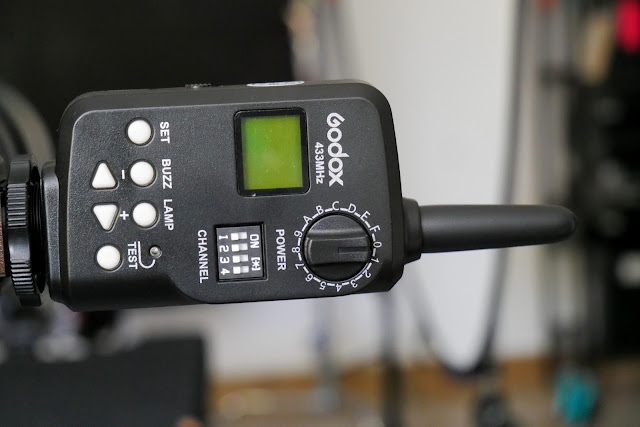 I'm using Godox flashes as my main light sources so it just makes sense to use their nifty (and cheap) little remote trigger in the hot shoe of the A7ii to make the lights go "pop." The remote can do so much; sad that I only use it as a trigger... But our mantra is to keep things as simple as we can. 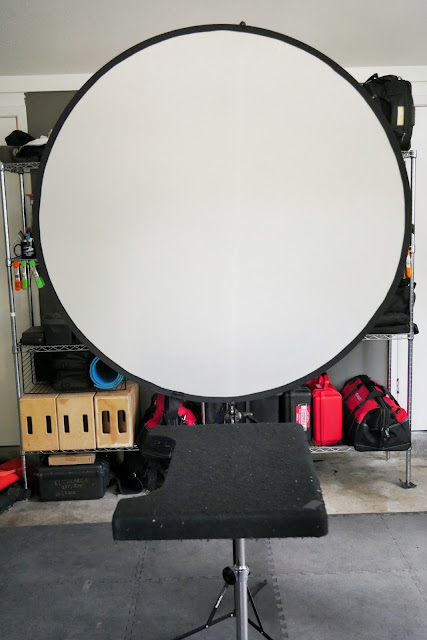 This is a side view of my shooting table in the foreground and the 50 inch diffusion disk I am currently using as a nice, soft, passive fill opposite the main light. The diffusion disk was about $30 and gets used almost daily. That's a good value in my book. 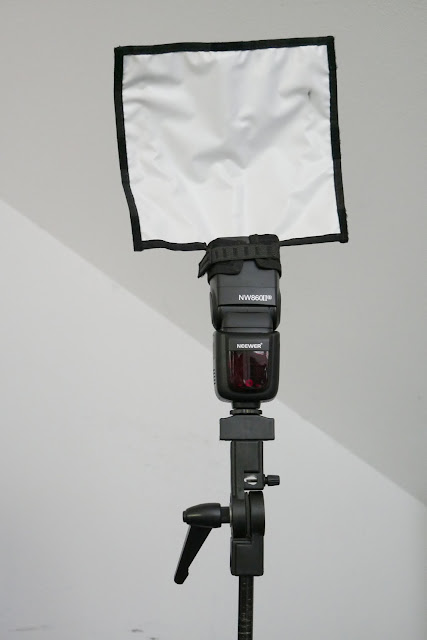 This flash is my current hair light / back light. It's bouncing into a Rogue flash reflector and it's sitting on the grip arm of a black C-Stand. I check before each portrait session to make sure it's not flaring into the lens. I use it at something like 1/16th power. 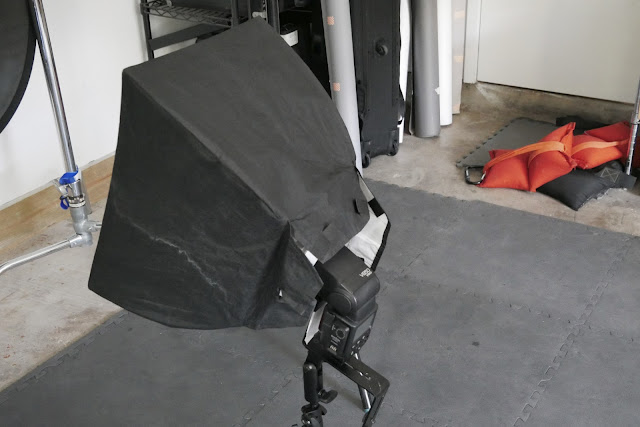 This old, battered Chimera 12x16 inch softbox has been around the block. I think we picked this up in 1993 and have used it, on and off,  as a light for the backgrounds since then. Yep. Another Godox but this one is set to 1/2 power because we use a diffusion dome over the front of the unit and the softbox itself soaks up some lumens. 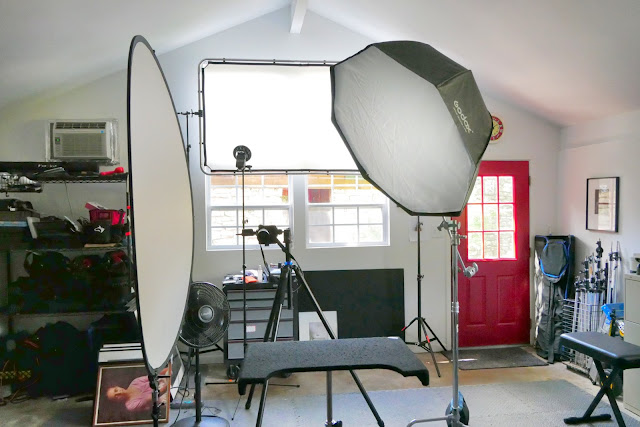 This is the view from the back of the set. You can see the big, 47 inch softbox I'm using for my main light source. It's also from Godox. (No. I have never met or talked to anyone at Godox. Nor do they pay me, say nice things about me, or send me personal notes of thanks for testing and writing about their products. I don't really need their sponsorship since this nicely built lighting modifier set me back only about $40. And that included free shipping...).

You can see that my shooting space is not very large. It's 24x24 feet and the ceiling peaks at 12 feet.  It may be the best investment I've made in the field of photography. We've produced thousands of portraits in this space along with hundreds and hundreds of product shots. It's also been the lab for the creation of five books about photography as well as one very self-indulgent novel. Also tangentially about photography. The studio space also has a 24 by 4 foot closet across the south wall. An efficient window unit AC keeps the space nice and cool in the Summer while our little radiator heater keeps it warm enough in the winter.

The studio is located on about a third of an acre of prime, west Austin real estate which it shares with our house. Most of our clients live nearby and the wide, safe streets provide abundant free parking.
Nice to be able to finish up with a client and then walk the twelve feet into the house for coffee or a fresh croissant. 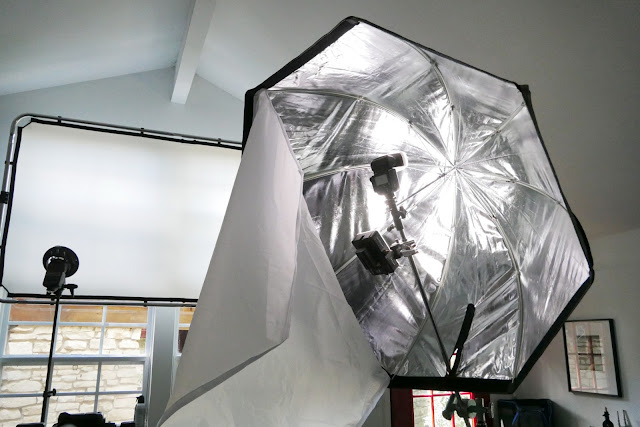 Platinum VSL member, Frank, brought these Godox umbrella style softboxes to my attention.  They are great. Quick to set up and with very nice light quality. They work especially well with bare bulb flashes. I have made one minor addition to the product. I added a small LED panel inside the diffusion cloth to serve as reasonable modeling light. There's a detail just below... 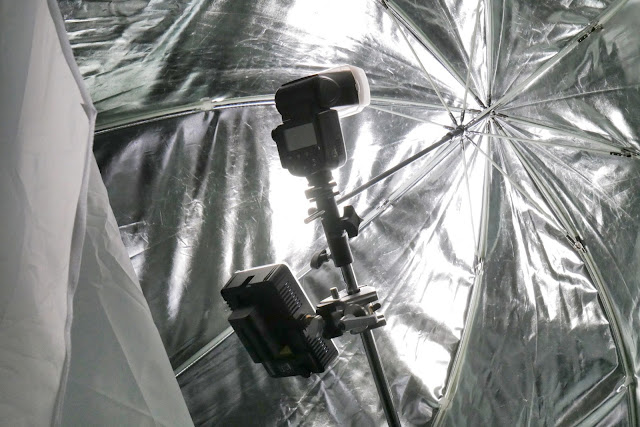 I mentioned that I have a shooting table in the room. It works great to "anchor" portrait subjects to a small envelope of space. It also gives them something to put their hands on for support and stability. Just below the shooting table is an orange X on the floor, made of orange gaffer's tape. It's a mark that makes set up quick and easy to restore should stuff get moved around during a shoot.

Once our session is over and we've sent our subjects on their way I import the raw images into Lightroom and edit them. Editing means I choose which images stay and which ones go. It's good not to confuse the act of "editing" with the idea of post processing, color correction or retouching as these are different actions. After I have edited the take down to a reasonable number I then proceed to post processing by making global color corrections and then fine tuning exposure on the images that fall outside the optimum levels.

At that point I upload full size, low compression Jpeg files to Smugmug.com. Two reasons for this: Unlimited storage! the large file is big enough to use if all my other back-ups fail. I currently have 320,000 stored in galleries on Smugmug. The idea of this additional offsite storage is anxiety reducing. The second reason is more prosaic; I present the images in their galleries to the marketing team at the medical practice. In conjunction with the doctors, they select the frame they want to use. I retouch the finals and send them back as a collection of Jpegs and Tiffs in different sizes as well as one large Jpeg profiled for their color printing house. They make a large portrait of each doctor to use in the clinic where the doctor practices.

I love being able to leave the studio set up and ready to go. The big, blocky, lithium batteries in the flashes seem to last forever and it's nice not to have to reset over and over again.

As I was writing this one of my friends from swim practice called. He needs a photo for his board of director's role at a banking company. Since the studio is set up and ready I invited him to come over after swim practice tomorrow morning. I'll set up a different background but everything else is ready to go. Nice when it works this way.

Posted by Kirk, Photographer/Writer at 17:57 6 comments: