Wouldn't it be cool if someone made a really nice super wide angle to near normal zoom lens for the M4:3rd cameras? 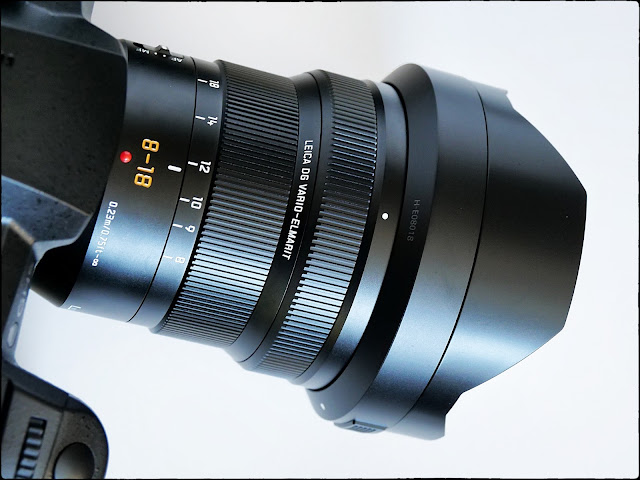 Oh, I just remembered that there are three or four to choose from. Seriously though, I started looking around at wide angle lenses to pair with the GH5s as we're pitching an architectural firm on doing some dynamic video. The firm in question does lots of big spaces and there would be many opportunities to really stretch the spaces with the right lens.

When I last used the Olympus and Panasonic systems the primary choice in the super wide to wide niche was the Panasonic 7-14mm f4.0. I didn't own one but the consensus at the time was that it was pretty good but suffered from a magenta artifact in the middle of the frame if the lens didn't like the way light was coming in. The corners could be a bit soft, depending on the type of material you might be shooting...

The other choice was from Olympus and it was the 9-18mm f4-5.6 lens. It's build didn't inspire enough confidence in me to spend money on the lens but I'm told it's not a bad choice for the price. But that was then, in the age of noisy, 12 megapixel sensors and this is now, in the age of 20 megapixel sensors and the kind of ISO invariance that we've come to expect from new generation sensors.

But, voila! There are two recent lenses that seem to be the new contenders for the wide angle crown in the land of smaller sensor, interchangeable lens camera systems:  The Leica/Panasonic 8-18mm f2.8-4.0 and the Olympus Pro Series 7-14mm f2.8.

I'm pretty certain, having read numerous reviews and having played with each at my favorite bricks-and-mortar camera store, that both will provide the level of sharpness and detail that I require (but your mileage will surely vary). So, how to choose?

On paper the Olympus Pro lens is obviously the one to have; if you are wide-wide angle fan. It's got a full millimeter more wide angle capability and a constant aperture, f2.8 with which to suck in maximum   light across the range of focal lengths. Neither lens features (or really needs) built-in image stabilization so you don't lose anything there no matter which direction you take.

Of course one would always choose the Olympus --- after all, it even has "Pro" in the name...

But not so fast. What if you want to use it to shoot mostly video? Does the Olympus product win with its constant aperture lens? Well...maybe. But it does have one fatal flaw where my use parameters are concerned. It has a very bulbous front element; so bulbous that it doesn't allow for the use of screw in filters on the front of the lens. So, no polarizing filter can be used and, more importantly, no variable neutral density filters need (or can) apply.

In the end it wasn't a tough choice for me. The Panasonic/Leica seems like a perfect accompaniment for the GH5s and the filter ring was the critical consideration. I will confess that as a long time Leica R and M user I also loved the design and graphic elements of the lens. This particular win, for me, goes to the Panasonic/Leica.

How is it in actual use? Preliminary tests are promising but we'll know more after spending a few hours out and around shooting stuff. Coming soon to a blog near you.

Posted by Kirk, Photographer/Writer at 13:27 4 comments: