Back in the happy zone. The second swim of 2018. The thrill of setting up the studio for a portrait. The excitement of a proposed TV commercial that's got a tough deadline and will require teamwork. So much so quick. 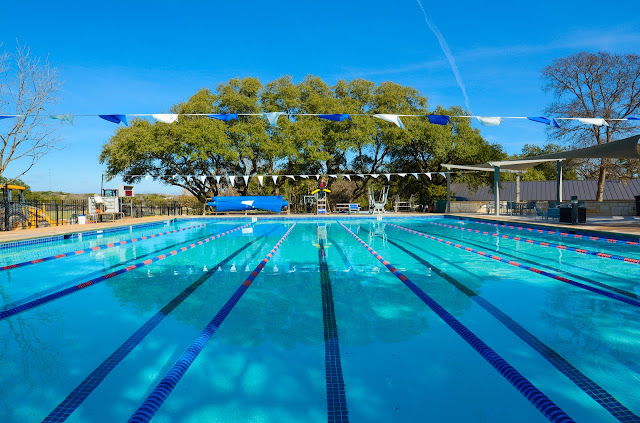 I spent the morning cleaning up the studio. I know. It's a recurrent theme in the blog. But if you work on location a fair amount there will come a time when you need to sort out the gear you used that was specific to each shoot, get the batteries charged, put the pieces back in their cases all so you'll know where to grab them the next time you need them.

At 11:45am I leaped up from my desk and headed to the door. The swim gear was already in the car. I smiled as I left our street and headed that one mile east to the Rollingwood Pool. I pulled into the parking lot and almost cried, I was so happy. The pool sparkled on the other side of the hedge and the fence. My fellow masters swimmers were pulling their gear bags out of their cars and meandering toward the pool for the noon masters swim. This would my first noon swim in the newly renovated pool. A swimming refuge I've been drawn to for over 20 years now. This would be only my second swim since the fateful night of Christmas Eve when my mother was rushed to the hospital. The time in between seemed to blur. All the nights spent in San Antonio with my father. The meetings with attorneys. Evenings at my dining room table with stacks of paperwork and bills...

With the pool in front of me all the drudgery and sadness seemed so much more manageable than I could have only imagined two weeks ago; or even a week ago. We chatted on the deck. We adjusted our goggles. We teased each other about the weight we gained over the holidays. And then, one by one, on no particular schedule, we jumped into our various lanes and began to warm up.

The water was perfect. Neither cool nor warm. It enveloped me and caressed me. I swam with Wilson in my lane today. We trudged (happily) through the warm ups and then through the sets. I actually enjoyed swimming backstroke with the sun in my eyes. I could feel the weeks of relative inactivity expressed as soreness and quick fatigue in my muscles. But all the technical stuff was right on the money. Every flip turn neat and economical. I even luxuriated in a bit of cheating; I pulled on the lane lines when we swam backstroke. For an hour the only thing on my mind was the swim. The trajectory of my pull. The cadence of my kick. The modulation of breath. And it was superb.

Not a pretty swim by any means, but just the right thing at just the right time. And then my favorite sandwich shop for a late lunch. It was two hours that felt more luxurious to me than a vacation at a five star resort. I'll be back tomorrow. I remember now how addictive good activity can be.

Setting up the studio for a portrait to match some previous portraits done on location.

We (Ben and I) recently did a series of portraits for an accounting firm called RSM US. They have offices in various cities around the country and we've got one here in Austin, Texas. We started the first round of portraits in December. We did another round two weeks before Ben headed back for his last semester of college. But there are always people whose schedules don't fit neatly into business calendars.

I got an e-mail from one such person and we set up an appointment to do her solo portrait session here at the studio. But we wanted it to match what we'd done on location at their offices. No problem. When I do portraits on location or portraits that are intended to match up, person-to-person, for businesses I like to make little drawings that are maps showing how to get back to a core style we're using over time. I'll do drawings that show the kind of modifier I was using, how far it was from the flash to the subject, notes about light ratios and power settings as well as the exact name of the background (storm grey, steel gray, studio gray, etc.). I will even make notes about what worked and what did not!

This way I can go back to the gallery on Smugmug to see what everything looked like as a final piece and then refer to the notes to see exactly how we got there.

For tomorrow it's a Phottix 48 inch octabox as the main light, a 60 inch umbrella as the fill light, a gridded 7 inch reflector on the background and a small speed light as a hair light. All the big light modifiers are powered by the battery powered Neewer Vision 4 mono-lights. I'll be using a GH5 but in a break from the previous set ups I'll be using the Rokinon 50mm f1.2 lens instead of the 12-100mm Olympus Pro lens. My goal is to make the final gallery look consistent but to make each portrait different enough to show the individual personality of the sitters come through.

A blast from the distant past. A photo of my wife as a young university student at UT. 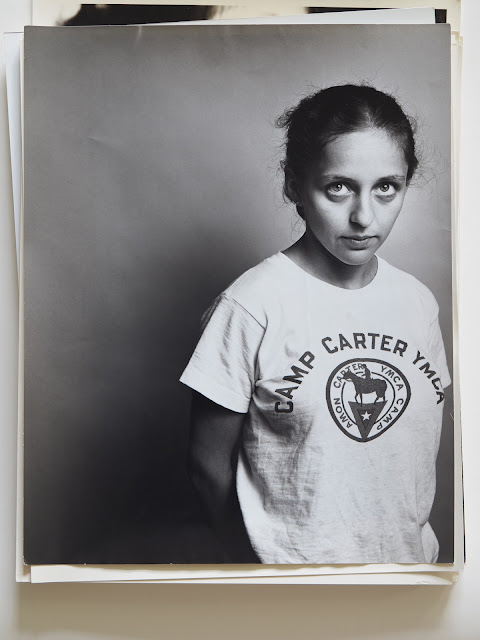 Digging through boxes of stuff at my parent's house put me in a nostalgic mood so when I came back to Austin a few days ago I started looking at the work I'd done over the years. Especially the "family" portraits. I remember shooting the image above in the very early days of my interest in photography. It was shot with a Yashica 124G, medium format camera that had a fixed, 80mm lens. The film was something slow and relatively grainless and it was done with my first real studio flash unit; a Novatron 220 pack with a standard head. All my stuff from that time was done with flash blasting through a white, translucent umbrella. I used it close in and the same way most of the time.

The T-shirt was an old one of mine from my days at Summer camp as a kid.

I include the above photo because I spent today marveling at what a wonderful partner I have. She's been helping organize my parent's paperwork, visiting my dad in memory care, getting Ben's travel squared away and still has the bandwidth to work on creating a logo for one of her graphic design clients. I need to stop every once in a while and realize just how lucky I have been; at least where my spouse, wife, partner is concerned.

I've just been back in the office for a week and some change but am already having to turn down work. One thing I will not turn down is the chance to do a 30 second TV commercial for network broadcast. The folks at ZACH Theatre have a new production and wanted something really kinetic and visual to launch it with. I'm going over to scout the rehearsals tomorrow but this will be a big deal, a big time investment and the chance to make the cameras and Final Cut Pro X really sing. I'll pull in several of my friends to help. At least I hope I will..... Lot's of Panasonic gear gonna be floating around that Main Stage next week. At least that's the plan. 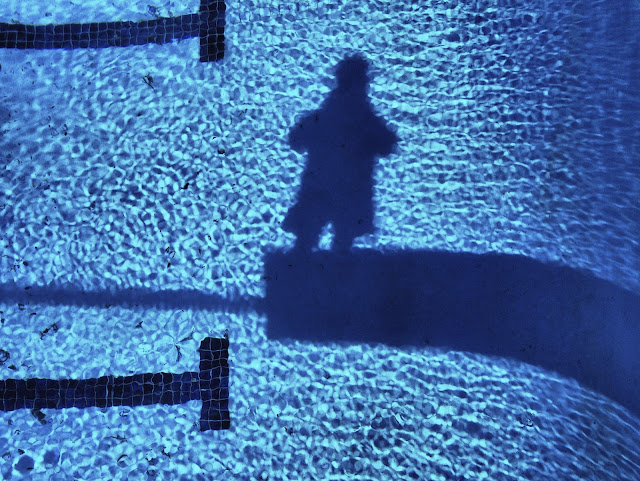 Today...it's all about the pool. 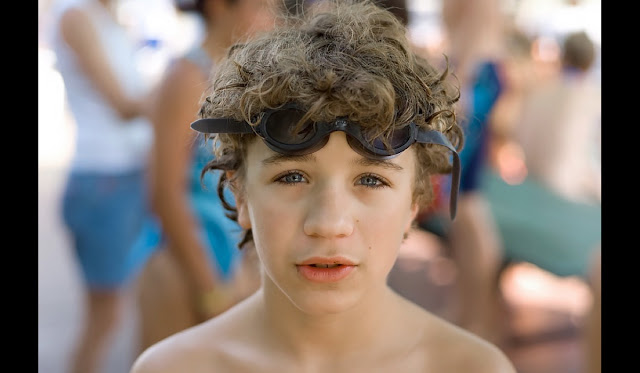 Because I have such fond memories of the time spent there. 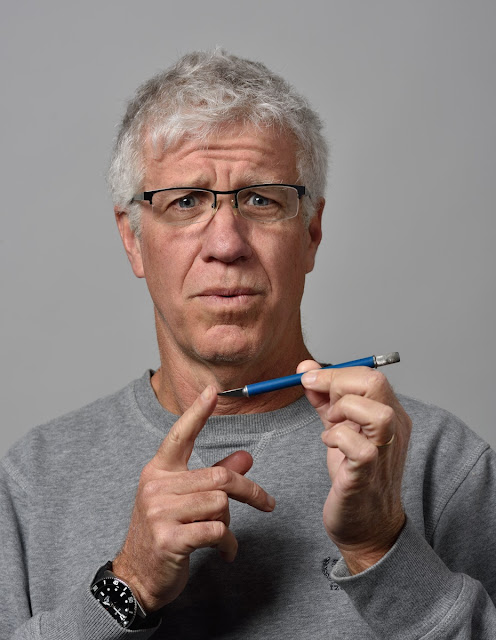 One more thing. How sharp is that Rokinon shot wide open?
Sharper than this Exacto knife blade......


Posted by Kirk, Photographer/Writer at 21:09 3 comments: