But the shoot seemed to go really well. 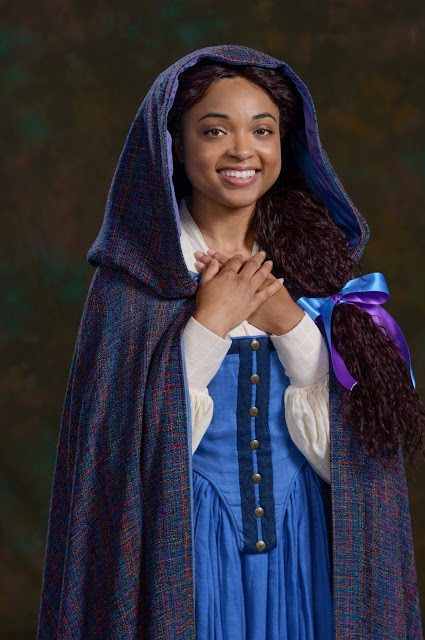 ©Kirk Tuck. Brianna as "Belle" in the upcoming
Zach Theatre production of, "Beauty and the Beast."

Posted by Kirk, Photographer/Writer at 18:14 No comments:

Stupid and mindless destruction of gear.

I decided to bring a TV monitor with me on today's shoot so the marketing team of my client could see the big images across a 24 inch screen. It was going to be so civilized. I was busy loading the car in the driving rain and I stuck the monitor, carefully wrapped in plastic to prevent water damage, onto the back seat. I left it standing up and then instantly forgot about it.

I was zooming along to our appointment when a traffic light turned yellow then red. I put on the brakes and a second or two later heard a "smack" from the back seat. The monitor came down with gusto, banging into the hard back of a case. I didn't think much of it until we set the monitor up on the stage and plugged in the HDMI camera from the camera.

My art director offered to recycle it for me. We spent the rest of the afternoon looking at the LCD on the back of the D800. I guess this is why we generally transport the Atomos Ninja monitor in its own hard case.

I console myself with the thought that I'd bought the monitor on sale for somewhere under $200. I cursed myself when I realized that it was handy to have around and I'd eventually have to dig into my pocket to replace it.

Other than that the shoot went great!
Posted by Kirk, Photographer/Writer at 17:25 3 comments:

Fixing the pesky back focus in a Tamron 28-75mm lens. 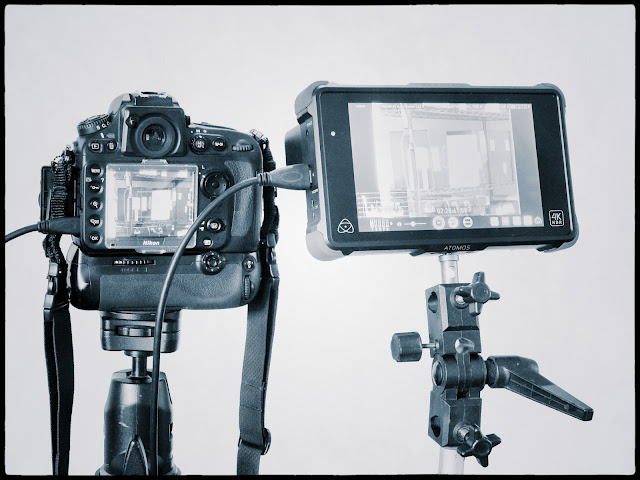 My old, used Tamron 28-75mm zoom lens was giving me grief. Even with minus 20 steps of back focus correction I could not bring the lens into a range where back focus was not obvious. I took it to Precision Camera and they let me know that a mechanical focus adjustment would entail sending it back to Tamron for calibration. They estimated the cost to be around $250-$275.

Since I bought the lens for appreciably less than that I was not particularly motivated to toss more cash at fixing it. Especially since I have another lens, the Nikon 24-120mm f4.0, that covers the range, and then some. But when I used the lens on a past project which called for live view I came to realize that it's a very, very good performer at nearly every aperture and focal length. Sure, the corners of a wide open frame, at the widest focal length are a bit dicey but that's never been much of a concern for most of the stuff that I shoot. In addition, I also own the world's greatest standard zoom lens, the Olympus 12-100mm f4.0 Pro so I was in no rush to do a costly "replace or repair" for a third string choice. But, like every descendant of depression-era parents I am loathe to throw away anything I might have a use for and, when confronted with obstacles (like back focusing) I tend to grind away at the problem until I hit on a workable solution.

Eventually I'll take one of my reader's advice and try doing my own shimming of the lens mount. I have a suspicion that's what my $275 would buy at Tamron....

But for now I've decided that the lens is actually a manual focus lens and, in such form, works well....If I can get it accurately focused.

Enter live view. Today I'll be shooting a glamorous series of photographs of a beautiful, young actress who will be playing "Belle" in Zach Theatre's upcoming production of "Beauty and the Beast." I like to get buy in from the marketing team as we shoot, changing lighting and shoot some more, so I planned on bringing along an external monitor so we don't need to all gather behind the camera to see what we're collectively getting. I check every piece of gear before every shoot so I had the Atomos Ninja Flame 4K monitor out and set up (tech checking is also good for reminding me about where all the menu features are located) and connected to a Nikon D800. Works great and it's cool to see wave form meters on screen that are so helpful in setting correct exposures....

After I tested the shooting rig I remembered the old Tamron. I attached it to the camera and fired everything up again to take a look. I tried one more AF test and, yes, sitting overnight did nothing to tame the back focusing. I switched to manual focus, switched on live view and popped in some frame magnification. On the glorious Atomos monitor I was able to see exactly when perfect focus was achieved. I could also turn on focus peaking which, again, is very, very accurate o the seven inch monitor screen. When I reviewed my test frames I remember why I had not abandoned the Tamron 28-75mm after getting the diagnosis from the camera doctors; it's a very bite-y lens with its own look.

I'm taking it along with me to the shoot today. We'll have the camera on a tripod and the monitor riding alongside for quality control. I'll interchange that lens with the Nikon 24-120mm f4.0 and the Nikon 70-300mm f4.5-5.6 G VR lens and we'll see which one emerges victorious. I have a sneaking suspicion that at f5.6-f8.0 they will all exceed our marketing needs. But it's fun to mix stuff up...

Other notes. If you are around and want a change of pace, change of venue, I'll be speaking to the Dripping Springs, Texas "Photographers of Dripping Springs" group on Thursday evening, the 28th. I'm sure they would love a few extra bodies to fill out the mix. I got to choose the subject so I've decided to give a talk (about an hour) on the nuts and bolts of ...... live theater photography. I'll talk through my techniques and also show a few examples. The details: http://photographersofds.us/2018/06/19/pods-june-meeting-june-28-2018-630pm/
The "where" in on this contact page: http://photographersofds.us/about/

This is a very rare, public appearance. The first in about a year. Come by and say hello. I think we're all going out for Mexican food right after....

More Other Notes. I think we're still on schedule for the Craftours Iceland Photo Adventure starting on the 27th of October. If you are interested you might want to head to the Craftour's site to sign up so we can make the minimum class size and actually get to do this thing. http://www.craftours.com/crafts/photography.php

Chilly fun. Great food. Lots of photography. I'll be on my best behavior....
Posted by Kirk, Photographer/Writer at 10:59 No comments: