Currently mired down in upload hell. Why oh why do I photograph with reckless abandon? It could be worse, I could be uploading Nikon D850 raw files.... 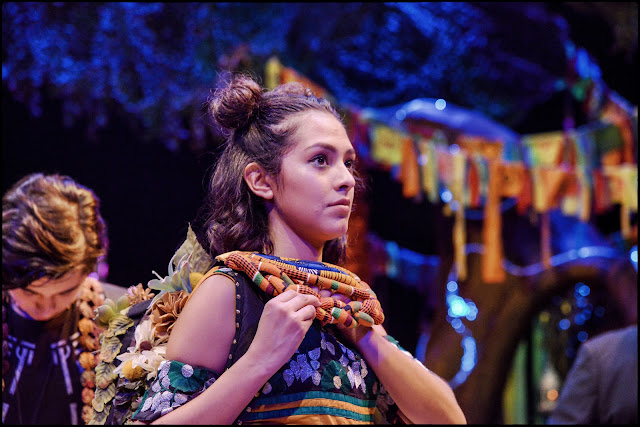 Leslie Anne Leal in "Tortoise and the Hare" at Zach Theatre.

What is Saturday like when there is so much uncertainty in the camera world? Upon the announcement of the new Nikon Z cameras did my older cameras shut down and cease to function? Am I stuck making spreadsheets and comparison graphs of all the new, announced and unannounced but rumored cameras? Am I on the phone with the credit card companies, trying desperately to get my credit limits raised? Getting ready to plunge into frightening debt in order to "keep up"?

Naw. I got up early this morning so I could go to the 7:30-8:30 a.m. Masters Swim Practice (all caps, just for fun...) and get in a few thousand yards of competitive swim practice done before the day revved up in earnest. A quick stop at the coffee shop for caffeine and a bagel and then into the office to pack for my Saturday morning photography assignment.

I spent the last part of the morning and the first half hour of the afternoon photographing the dress rehearsal of a play by Allen Robertson, based on the old fable of the Tortoise and the Hare. Original story, music, stage set and choreography. It was absolutely delightful. One of the best family oriented theater productions I've seen in years and years.

But before I could get to the theater and start photographing I had to decide what to shoot with and what all I needed to pack.

I had two considerations that drove my choices. First, the production was in one of Zach Theatre's smaller spaces and the lighting in the space isn't as ample as that which I am used to in the larger, newer, Topfer Theatre. The lights in the small theater are still mostly tungsten fixtures and not as bright as the newer and brighter LEDs in the bigger theater. My other consideration was a very positive one; we wouldn't have an audience for this dress rehearsal so the noise of the camera shutters was immaterial. I could choose the cameras I wanted to use without any concern for audience experience.

I'm in the middle of three video projects for which I am using the GH5 cameras pretty much non-stop. I thought I'd give them a rest and use something different today. I considered the Nikon D700s but I decided to be boring and safe and use the Nikon D800 and D800e cameras on the off chance that the theatre's marketing department decides to do huge posters or building wraps with the resulting images. Pretty sure the D700s could handle those kinds of enlargements but I was looking for an effortless experience that I would not have to explain after the fact.

In the smaller theater the lens that is most useful most of the time is the 24-120mm f4.0 VR lens. It's not super sexy and doesn't boast super fast apertures but I'm always pleased with its performance and detail rendering. It was the first lens in the bag. I also brought along a first generation Nikon 70-200mm f2.8 but it never made it out of the camera bag. The lens I used alongside the 24-120mm f4.0 was the older 85mm f1.8D lens. I wanted it along for the ride so I could shoot some individual actor shots with the lens wide open. It's that depth of field thang.

In one respect I was a bit brave today, I opted to shoot the D800e with the 24-120mm and to do so in Jpeg instead of Raw. Since experience informs me that I'll likely shoot between 1,000 and 1,400 images during the course of the show the thought of processing somewhere close to 64 gigabytes of rawness made me yawn and grind my molars. Besides, I actually like the way the D800e handles high ISO noise reduction in Jpeg better than the way I end up handling it from raw files. Go figure.

I never use flash or any other photographic light source when photographing theatrical productions. One reason is that it's annoying to the actors, the audience, the crew and even the rats living in the walls. Secondly, there are people who design beautiful light for stage shows and part of our documentation is to showcase those lighting designs. The lighting designs are as much a part of the show as the music and the costumes...

I use the camera's spot meter to help me stay in the right exposure arena and I use the 3D AF setting in continuous AF, controlling the focus by using the back button AF to grab and lock onto a subject. If  subject is moving I just keep the button depressed and keep an eye on the AF squares to make sure the camera is adjusting focus for the movement. Button un-depressed and we're locked in. I resisted shooting this way for years but I finally capitulated and came around. It is a faster way to track people and it's usually very accurate. I'm lucky with the used 24-120mm f4.0 I picked up on re-entry to the Nikon system; so far I've experienced no back or front focus on any of my four Nikon bodies. Nice.

True to form I came home with nearly 1,500 exposures which I pared down to about 800 images. I tweaked them in Lightroom and saved them out as high quality Jpeg files with a maximum of 6,000 pixels on the long side. Today I threw caution to the wind and shot at both 3200 and 6400 without a care in the world. I was banking on some software engineer at Nikon six year ago to have produced a nice balance between chroma and luma noise and I was happy with what they spit out.

I am now uploading the 800 files to Smugmug.com. My client will use the online galleries for quick selections for short deadline publications, and I will also set up download links to deliver the entire full res collection from Smugmug to my client. They get to archive all these images; it's in my contract....

I still have stinky, slow broadband here. I don't do cable TV and AT&T wants way too much money for any service that isn't bundled with all their mostly useless "content" products. Eventually I'll get Google Fiber in my neighborhood and it won't take hours to upload these precious files. My friend, Frank, lives in an area where they have access to Google Fiber and he suggests that it's so fast that his big files are uploaded before he even pushes the "return" button on his keyboard. Time warp fast.

I'd like a faster connnection but I'd also like world peace, an uncorrupt U.S. government (I can only take care of one country at a time...), a couple of different Porsches from different decades, more I.Q. points -- preloaded,  and a roll of one hundred dollar bills that automatically replenishes itself. I'll just be happy right now with having no health issues, having a nice and fun family, and having a net worth that's in the black territory instead of in the red. The rest of the stuff will need to get prioritized. But right now that's not my job. My job is to swim and to occasionally take nice photographs. Everything else is a waste of time.

A program note: Try not to be snarky and combative in the comments if you can help it. If you can't help it then do me a favor and see a mental health care professional before sharing. I'm not here as a willing  target for your misguided rage....

Posted by Kirk, Photographer/Writer at 18:24 9 comments: