First Job on which I used the Panasonic G9, and survived. Well. 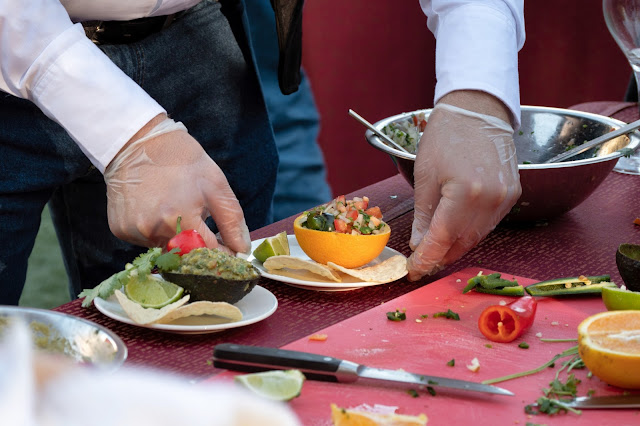 A quick blog note: When I discuss practical experiences about some gear I tend to do so in the context of actual jobs I've completed using the gear. Most of the time the jobs are done for corporate clients and we have often entered into understandings about what I can and cannot show publicly without violating either trade information or individuals' privacy. If I show work from a paid engagement and it shows recognizable people then I will have gotten permission to use it. Most of the time I rely on my written experiences to convey the information I want to share. Occasionally I'll use peripheral images from events as small visual accents to the copy. As an example of the kinds of images I often take but rarely show, I set up and shot a group photograph of 50+ people outside yesterday afternoon. While the photos exceeded my expectations I can't show them without going back and obtaining agreement from the company and then getting the permission from all 50+ participants. In this context that's a very, very low priority for my use of time. So, you won't see the group photos. You'll just have to take my work for it that they were SPECTACULAR (wink...).

Yesterday afternoon was warm and humid. A typical central Texas day in early October. We've had a rash of high humidity days stemming from storm systems in the Gulf of Mexico, and some high pressure domes. Adding in 90+ degree temperatures doesn't help the comfort levels...  I packed a camera bag for an assignment and, after a short nap on the couch, under the watchful eyes of Studio Dog, I ambled to my car and headed east on Hwy. 71, past the airport and on toward Bastrop. I headed to a resort to do a small assignment of the type I have covered for decades: a corporate leadership conference --- the team building segment.

As is par for the course around Austin the company I was photographing for is in the technology industry. They are one of the top companies to work for in the area and they do work all around the planet.

Today I had a pretty straightforward agenda. I would photograph the group of 50+ people outside around 4:30pm and then I would document them as they broke into eight teams of five or six people and did an abbreviated form of "Iron Chef." Each team needed to create a perfect guacamole, a perfect salsa and as good a margarita as humanly possible. A team of the resort food&beverage folks would be the judges.

The event was set up outside in the center of a U-shaped collection of fine resort buildings with some of the contestant tables in the sun and some in open shade. Of course, there were open bars and queso and guacamole other snacks to help the contestants stay focused.

I pulled together group shots of each department of people, just because that's something people usually want. After we photographed the judging and the awarding of much tequila I also photographed a pre-dinner reception, turned down an earnest invitation to join them all for dinner, and then headed back Austin to eat with the home crew (smoked salmon sandwiches = whole wheat croissants, split and toasted, spread with cream cheese, luscious smoked salmon, frissé and a poached egg. Delicious. Serve with chilled vodka?).

That's the preamble. So what camera did I take? What lens did I use? And how did it all work out?

I took the Panasonic G9 and the Olympus 12-100mm Pro lens. For a back up I took along a GH5 with an assortment of prime lenses. I took two flashes. One to use for the group shot and the other to use on camera for the event documentation.

Let's start with the group shot: I knew we'd be doing this outside on a warm and sunny afternoon so I knew I should take along a powerful flash. I was lucky to find a small hill that was shaded from direct, late afternoon sun by two tall trees but as with any tree shading there was still a bit of dappled sunlight here and there and I knew I should clean up the whole scene with some strong fill flash. But before I set up the flash I asked the resort to deliver a nice eight foot ladder. A higher perspective is nearly always better with big groups. Amazingly, the ladder arrived in minutes.

I envisioned setting up the group shot with the people in three rows and set up a Godox AD200 flash, with the clear flash tube firing into the pebbled  six inch reflector. I put it on a twelve foot light stand and weighted the base of the stand with my camera bag. The light was trigger by a Godox X1T-O flash trigger which can give me ttl control over the AD-200 as well as HSS. I used the system in manual because I knew I'd need the full power of the flash to do the job correctly.

The hardest part of getting an executive group organized is just getting the group organized. But the heat and humidity were allies of sorts because they motivated people to get through the process a bit quicker. The flash took about two seconds between shots to recycle but it was absolutely perfect for cleaning up the shot and the trigger worked as it should on the Panasonic G9.

When I finished shooting the shot and the group headed off to grab beers and sustenance before starting the competition I encountered my first (non-fatal) disappointment with the G9. I was shooting in Raw and when I reviewed the files everything looked perfect until I magnified the review image to 8X. Then the image seemed blocky and unsharp. Moving to 16X it looked....pixelated. I knew I had locked focus in the right spot and I knew that 1/250 with a wide angle setting on the lens was not remotely problematic re: camera motion, especially given the great image stabilization.

Of course it was a false alarm. The smaller review Jpeg generated by the raw file is just not capable of showing all the detail. I'm presuming that, like most cameras, if you want a really great preview you'd better shoot raw+high quality Jpeg to start with. Once I got the images on the 27 inch screen at the office I was pleasantly surprised to see that they were even more detailed that I would have imagined.

With the group shot out of the way I quickly packed up the AD200 and the trigger and put a Godox TT685-O in the hot shoe of the camera. I only turned it on and used it when I was in situations where a scene I wanted to photograph was half in bright sun and half in open shade. I try to boost the shadow areas without materially affecting the highlights.

The Olympus 12-100mm was, of course, flawless as an event coverage lens, going effortlessly from wide to a tight telephoto, allowing me to get lots of tight, one and two person shots and them zooming out to get a whole group.

I'm still getting used to the "hair" trigger of the G9. It's sensitive. But having only had the camera for two days I think I'm already getting the shutter button dialed in and sorted.

The camera was pretty accurate for color balance in most situations but when the sun finally dipped behind the western building and we were in total open shade I decided to help the camera out by setting the open shade white balance preset. Consistency means a lot when you know you'll be batch processing files.

I shot through 500+ files, with ample pre-chimping, and was still on the same battery at the finish. By the end of my time with the group I still had three bars left on the batter indicator.  The camera, lens and flash altogether weighed less than one of my Nikon D800's alone. It made for a comfortable package while gadding about in the heat and humidity for two and a half hours. No sore biceps today.....

The one thing that sticks out for me in my early evaluation of the G9 is just how sharp and detailed the files are. I hesitated about using the camera for the big group shot, thinking the D800e might be a better choice, but unless my client is planning to take a huge, huge print of the shot I don't think the difference is visible. Interesting that the small format has come so far. It's peachy for group shots as I rarely worry about people in the second or third rows being out of focus....

More to come later. It was a fun and low stress engagement. The camera helped. 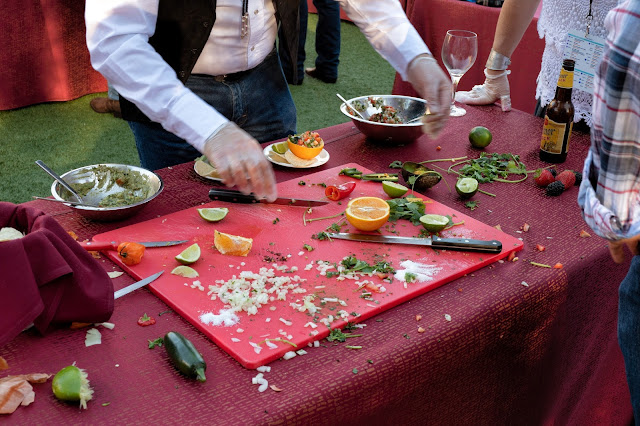 Not quite the most fastidious assemblage of chefs I've seen. 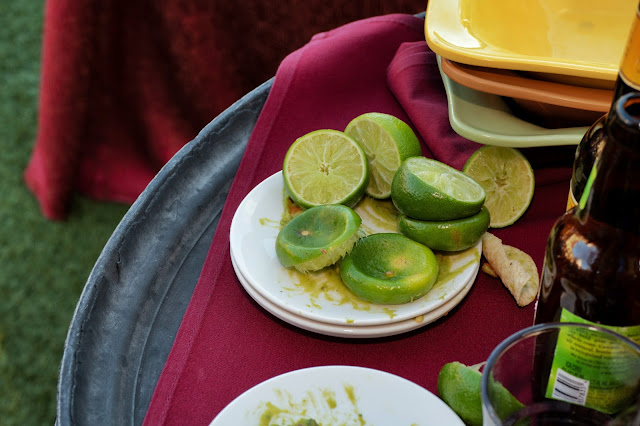 many limes were injured in the making of margaritas. Oh the horror. 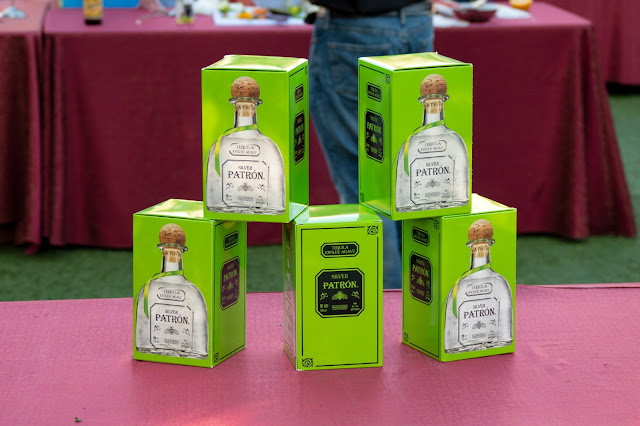 And, to the winners in the overall best category, the spoils.
Posted by Kirk, Photographer/Writer at 11:04 1 comment: