A couple of days with the X-Pro2 have helped me sort out a new working methodology. And use up some shoe leather.... 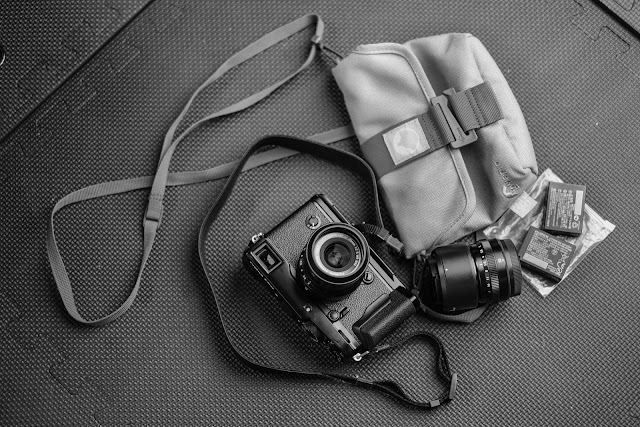 After a bit of trial and error, and the purchase of two competing lines of lenses, I've come up with what is for me a nice, small kit to take when I go out for walks in our lovely urban spaces. It consists of an X-Pro2 body (see the welcome grip attachment in the photo above...)  along with a 23mm f2.0 and the 50mm f2.0. I also bring along two of the NP-126S batteries; just in case. The small bag (it's really very small) is big enough to hold two of the f2.0 WR lenses along with a wallet and, if wanted, a phone. The camera doesn't go in the bag. It would take up too much space. It goes mostly over my left shoulder on a traditional strap but sometimes I wear it, bouncing up and down, on my chest like a 1970's tourist, and that's okay too.

I guess you could consider this my "day time" rig; the lenses are the f2.0 variety instead of their faster, f1.4/f1.2 counterparts. I'm pretty sure that if I were doing mostly interior photographs (at the museums, in coffee shops, in hotels) that I'd switch out the lens selection and go with the 23 f1.4 and the 56 f1.2 APD. But in broad daylight the max aperture differences are inconsequential as I seem to be settling in on f4.0 and f5.6 as my preferred settings.

I also keep my car keys in the little bag and, as you can see in the above photo, I keep the batteries in a separate plastic bag to prevent an unfortunate marriage of the battery terminals with the metal keys.

I've made a few mistakes in shooting the Fuji X-Pro2's but nothing so embarrassing that I'm hanging my head and leaving the field of play. The X-Pro2 just requires a "newbie" like me to pay a bit more attention to the process and the difference in controls; especially when using the optical finder. I tend to get into using EVFs so much I just assume automatically (and incorrectly) that the camera will "see" what I see through the OVF and that's a bad presumption. I'm working on it.... 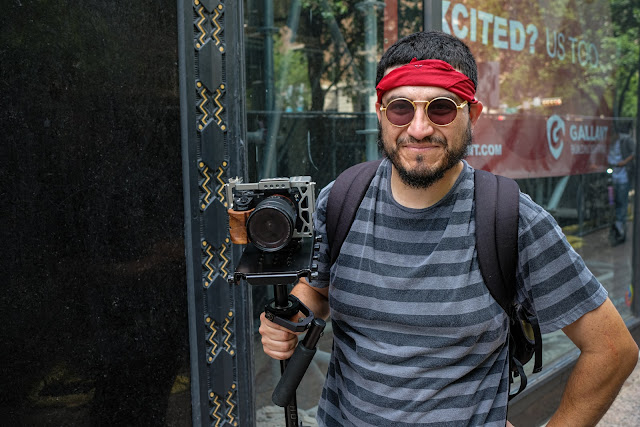 This gentleman was working on a music video with his friend. The camera is a Sony A7xxx. He asked me if I could play a small part in their video and so I acted the part of a photographer taking images on Congress Ave. His actor rode up on a scooter and showed me an I.D. card and asked if I had seen the person in the card. I said "yes" and point off down the street. I'm proud to say we got the shot in just two takes. 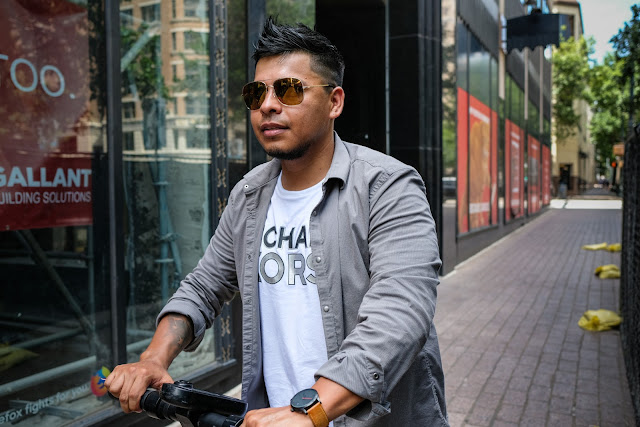 This is the actor I worked with for my short cameo.
It looks like they were having a lot of fun and had their
camera work well figured out. 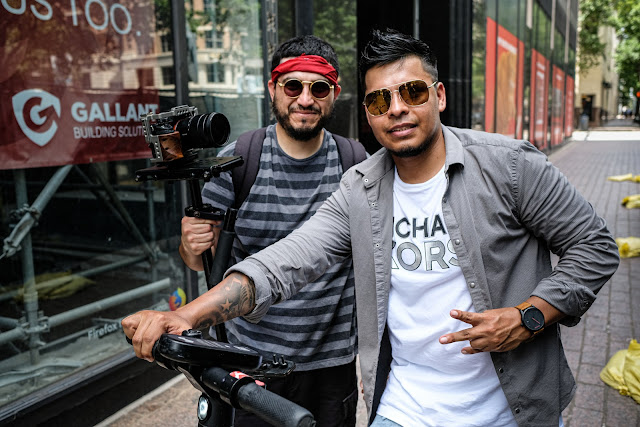 The traditional group shot upon completion.
23mm (I'm still learning with this one). 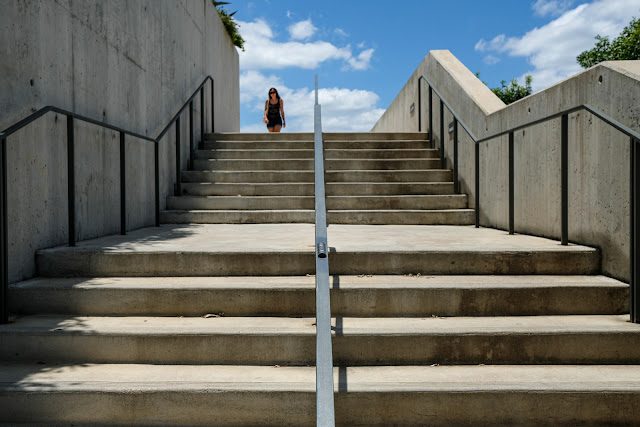 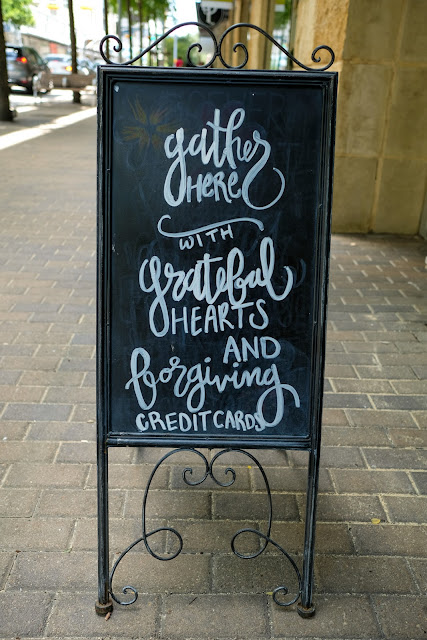 This store always has the best signage... 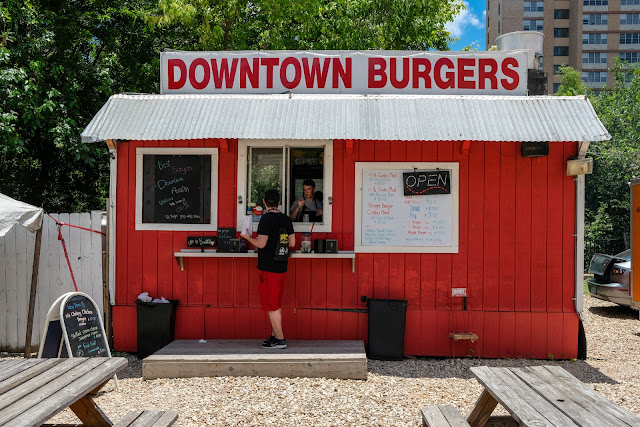 One step up from a food trailer? Weird business model in my mind. Cook burgers and fries.
Delivery them to customers who sit in the sweltering heat under a little tent.
Want some sweat with your burger? Maybe it all makes more sense in the winter... 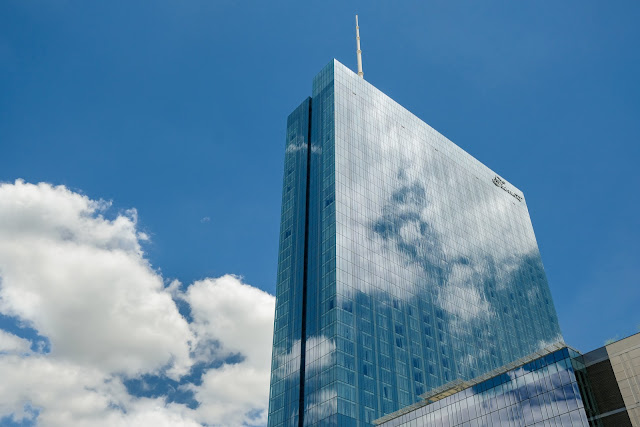 This is a new addition to the ever increasing inventory of downtown hotels.
It's called "The Fairmont" and it was the site of the WP Engine Summit Conference
that I was photographing just two weeks ago. 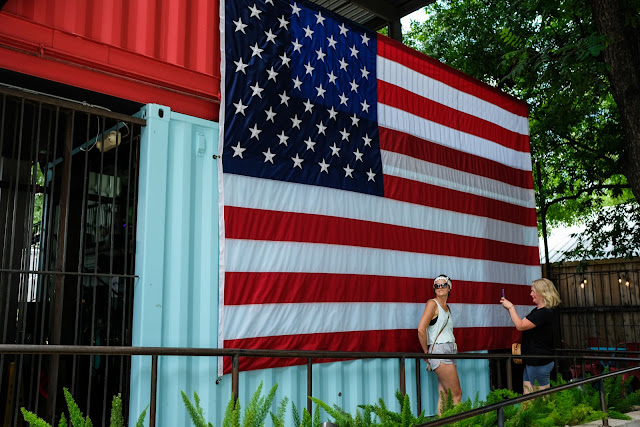 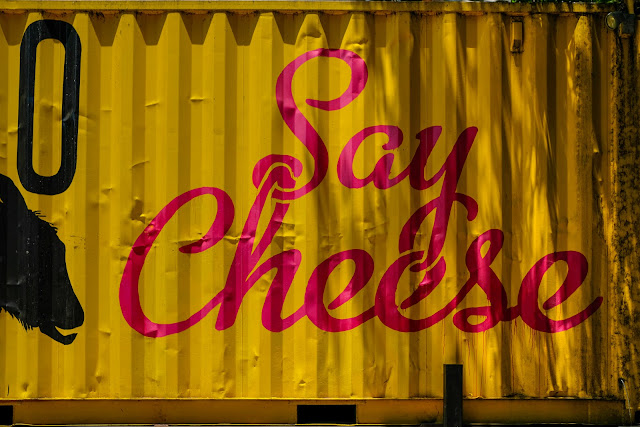 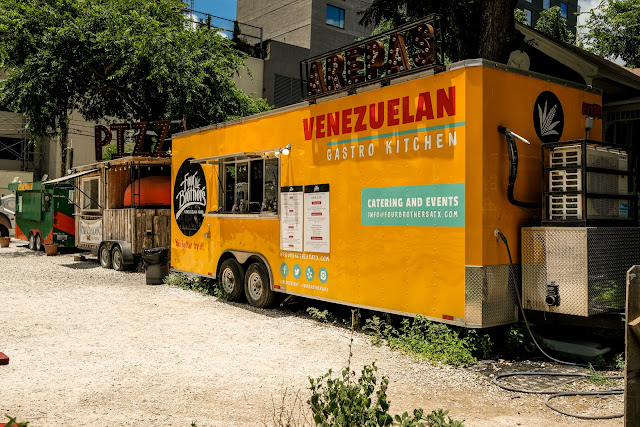 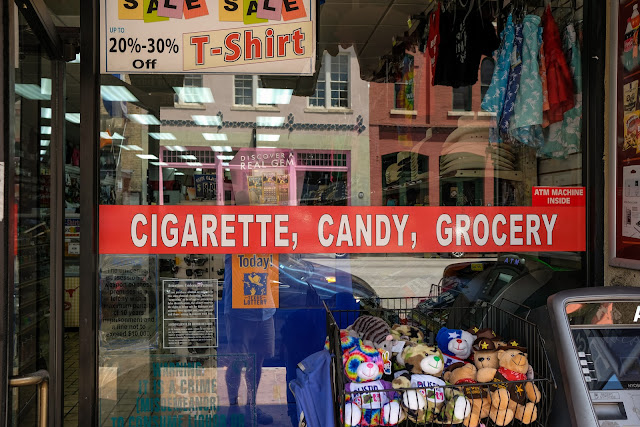 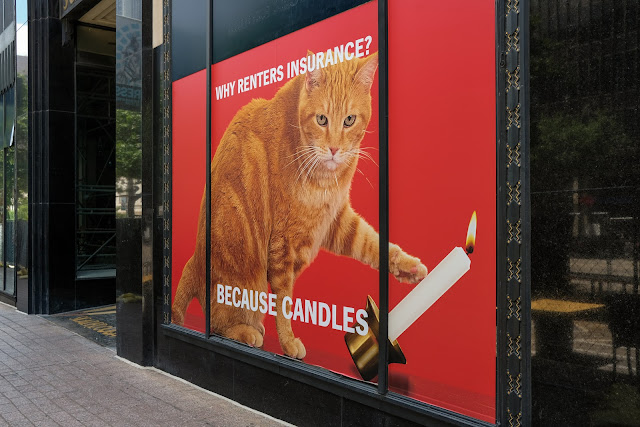 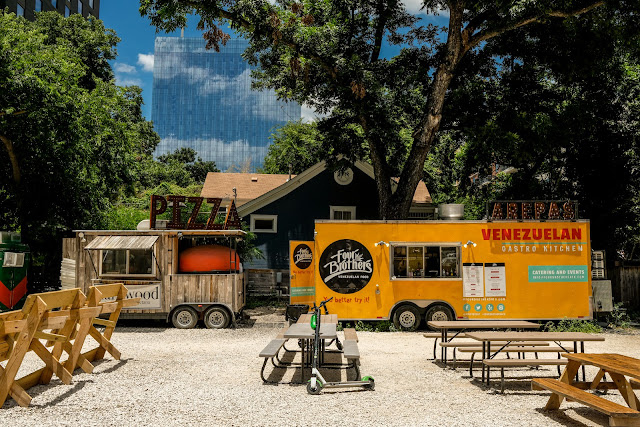 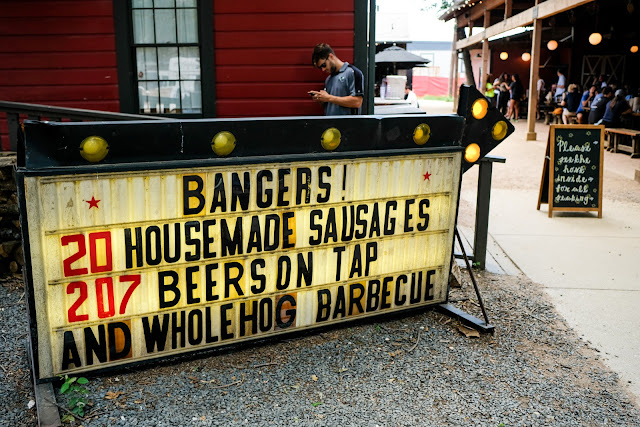 So, I discovered Bangers during the WP Engine Summit and I made it the
"turnaround" destination for my long walk yesterday. I broke with long
tradition and stopped in for one of their lower alcohol IPAs.
Very refreshing and a bit of chancy hydration for the long walk back to the car.... 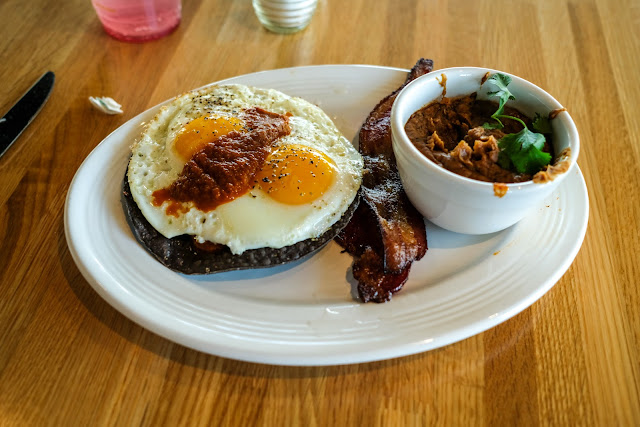 I was walking by our new (giganctic, grandiose, over the top) public library when I realized
that I'd swum hard, walked far and hadn't had lunch yet. It was already 3 pm when
I ventured into the library's very nice café and ordered their version of
heuvos rancheros. The beans were spicy and delicious. The bacon downright sybaritic.
Washed down with a blueberry Italian soda. 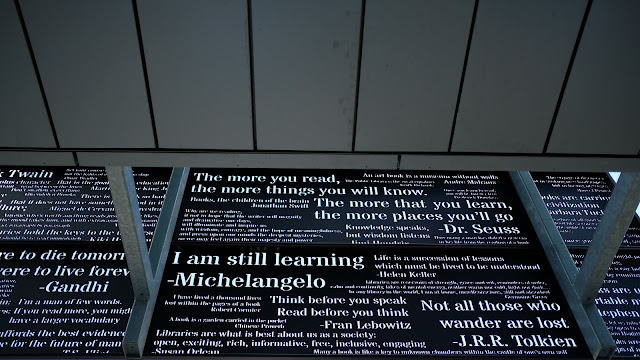 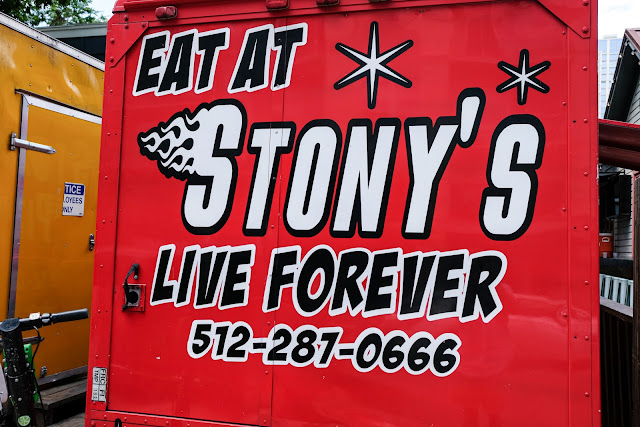 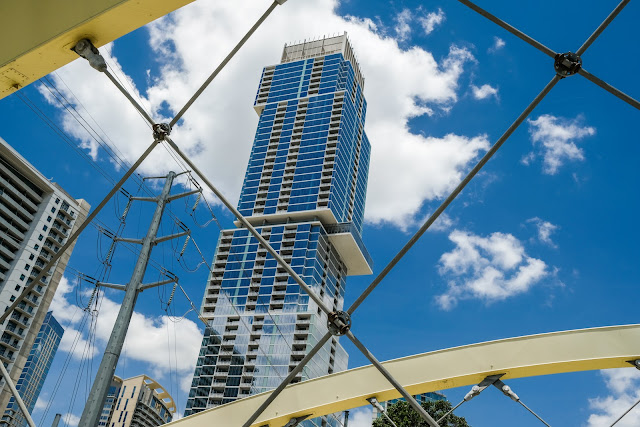 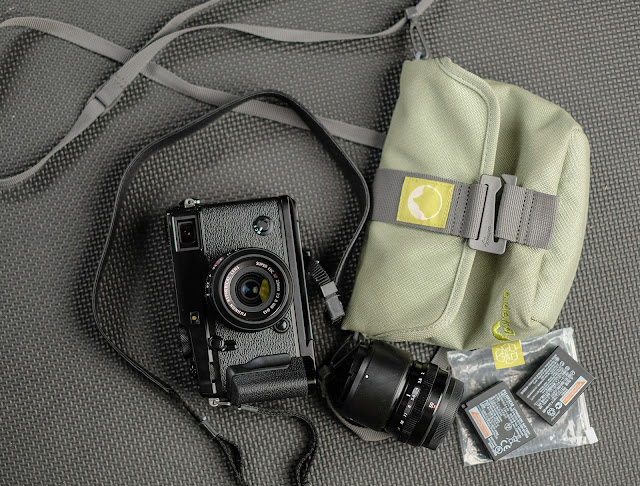 Quick Swim news. Our regular pool is closed today so I'm heading over to the spring fed pool known as "Deep Eddy." It's 33 and a third yards long and the water temperature is about 10 degrees (F) cooler than our regular pool. I just want to get a mile or two in before I start my day in earnest.
Posted by Kirk, Photographer/Writer at 08:50

Looks like there's just enough room in the bag to add the 50mmf2. Perfect compliment to the 23 & 35 f2's and maybe the best of the three. It's different enough from and smaller than both the 56f/12 and 50f2.4 Macro to very seriously consider. I keep the 3 f2's in my walk around bag and love them as a set. All the fast primes are in my other (& waaay heavier) bag.

The stairs leading up to the lady against the blue sky is an amazing shot! You never fail to impress, Kirk!

thanks Robin. Much appreciated. KT

May I ask: which strap is that on the XPro?

Smashingly good photos, featuring marvelous color. I spy a freshened eye at work with this camera. Those aftermarket add-on grips are great. Vello, Oben and others offer them with full width Arca compatible dovetails - nicely machined - and often with a detachable end plate which turns them into L brackets. All at an infinitesimal fraction of the price I paid for a Kirk (no relation) L bracket back in the D80 days.

I am honored to have had the same reaction to these as the inimitable Robin Wong.

I'm about to retire and have my eye on a brace of Fujicrons, probably the 16mm, 35mm, and 50mm, but am undecided between the X-Pro 2 and the X-E3. I owned the X-E1 in the past so know what to expect roughly, but I hear that the EVF is a bit small on the X-E3 compared to the X-Pro 2. Just finding a local shop that has both to make a comparison isn't easy. Love the pictures you are getting with the X-Pro 2.

I take it that the Venezualan Gastro Kitchen was rather like the Monty Python Cheese Shop sketch: no matter what you asked for, they didn't have any of it; that would provide an authentic Venezuelan experience.