New acquisition as a result of all the photography equipment I want being on sale... Hello new lens and memory cards. 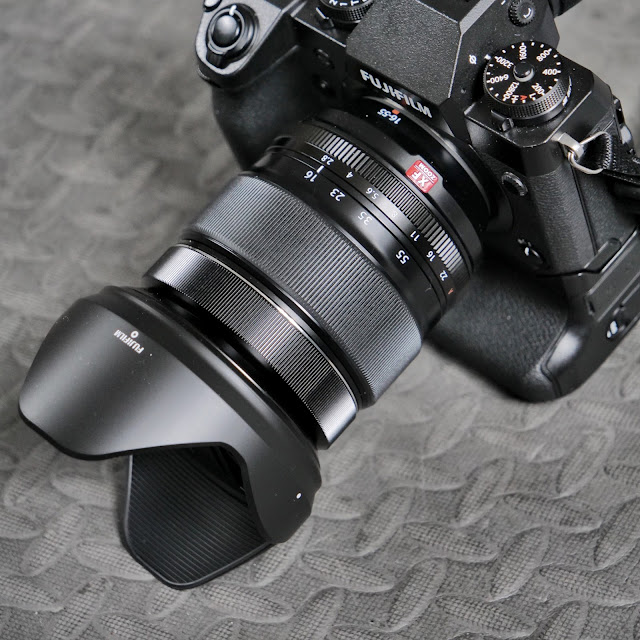 Just to put things in perspective, I have two different mid-range zoom lenses for my Panasonic cameras. I vacillate between using the Panasonic/Leica 12-60mm f2.8-4.0 and the (amazing!) Olympus 12-100mm f4.0 Pro lenses. They are each good at what they do and I just can't decide which one needs to stay and which one should go.

Now I have two standard zoom lenses for the Fuji cameras as well. One is the well regarded "kit" lens and the other is the much vaunted, constant aperture f2.8, 16-55mm version (with a bit more reach on the wide side...). I started out with the 18-55mm f2.8-4.0 lens because it's competent, popular and, when purchased with a camera, well discounted. It's smaller and lighter (obviously) that its faster sibling and it also is equipped with OIS (Fuji's abbreviation for image stabilization). The 16-55mm f2.8, which I bought yesterday, is much bigger, much heavier and.....if you believe the "press" on the web....much sharper and contrastier at most points throughout its range. And, well, it's a constant aperture f2.8. Sadly though, no OIS.

With the Fuji XT3 and the Fuji XE3 I need the lenses to provide I.S.. if I require it.

I'm just getting started with the new 16-55mm for the Fuji and am shooting my first portraits with it in about ten minutes. The casual shooting I've done with it looks great so far. I've been interested in this lens since I first started playing with the Fuji cameras but I was hesitant to drop the cash for one since it is normally priced at about $1200. A lot of Fuji product is on sale this month and the asking price at my favorite retailer was $899 (retail translation = about $900). Since the year has gotten off to a good start I thought I'd let my curiosity dictate my purchasing decision. Curiosity beat caution and here we are.

The 16-55mm is roughly equal (in angles of view) to a 24-85mm lens in the 35mm format. It has a big, fat body and a 77mm front filter size. The construction is something like 17 elements in 11 groups and a good number of the elements are aspherical while another generous portion are ED glass. When you look closely at the lens you'll see that it's beautifully built and a pleasure to use. Build quality, in my opinion, exceeds that of the similar lenses from Nikon, Canon and Sony by a good margin.

I was away from the keyboard for the last hour or so making a nice portrait of a guy named, Kevin, who arrived promptly, was well prepared and very engaging to converse with. Turns out we had a few things in common; his brother is a photographer and Kevin visited Iceland last year. But if you are ever at a loss for conversation with an Austinite you need only mention "traffic on Mopac" and you'll get some sort of response.... Anyway, I'm back and have now used the 16/55mm for a portrait session in the studio.

On the XH1 camera it did a good job consistently locking focus when using the face/eye detect AF setting. The rest of its performance was just the same as all the other Fuji lenses I've shot with: sharp, contrasty and nicely detailed. I'll try some more engaging scenarios and have a full review of the lens in a while. It sure is big.....and heavy......and very professional looking. The red badge on the lens body is cute. 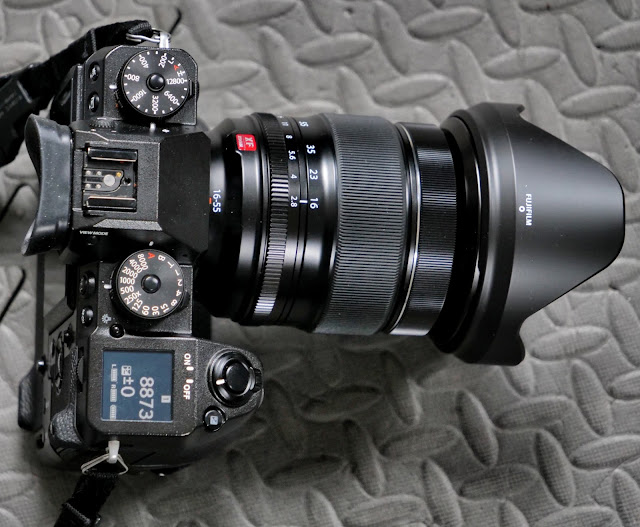 They might have been able to do a better job with the lens hood. It's a bit...thin.

So, while I was out at Precision Camera happily hemorrhaging money I also came across some new memory cards; ones I had not yet seen from Delkin. These are called the Delkin "Black" cards. They are UHS-II, V60 SD cards with a write speed of up to 300 MB/s. They are advertised as being "unbreakable", "waterproof and dustproof", "three times stronger than regular SD cards", they have a lifetime warranty with a 48 hour replacement policy, and (ta da!) they have their own, unique serial numbers.

I'm guessing the call them "black" to riff off the black American Express card which is seen as a status symbol in some circles but I'm also guessing that they made the cards black so we will never find them when they disappear into our black interiors of our camera bags and so they can dodge the liability of having to replace them.

The last set of 128 GB UHS II V60 cards I bought (about a year and a quarter ago) cost me right at $225 each but these are now $124.99 each. I bought two because I like to use identical SD cards in the cameras that feature two card slots. I imagine it's because I think they'll be better matched and for that reason more reliable. I have no science to back up my conjecture.

I'm not sure if $124.99 is a sale price or an everyday price but since they are almost half as much money for more features than the cards I bought from them last year I am definitely considering them to be virtually on sale. The XH1 camera likes these cards. The camera smiled and winked at me when I loaded them in and formatted them. Nice.

I now have six 128 GB SDXC UHSII cards and I think, for the time being, that will keep me well situated even for the longer video assignments. tip: Never format a camera memory card in your computer or allow your computer to erase all the files on a card after downloading. Always format your cards in camera and you will be almost painfully happy with your lack of technical card issues. Follow this advice to the letter and you may even find that you can use cameras with only a single card slot....really!

Someone asked me if the fast UHSII cards are worth it. First, if you are shooting 4K video with high data rates you'll need them to prevent shooting issues. Second, if you are using them in cameras that are UHSII compliant you'll notice much faster buffer clearing. Third, if you are using a UHSII, USB 3.01 card reader you'll marvel at how quickly your files download into your computer. Three good reasons to make sure you are buying modern, decent cards.

A few more photography notes; especially for Fuji camera users: Fuji now has a firmware update available for the XH-1. It prevents some occurrences where the camera exposures become unexpectedly brighter. I haven't seen this effect but am happy to prevent it, proactively. It's a recommended update.

Fuji also has a firmware update for the XT3 cameras. The update is similar to one made for the XH1 back in January. It allows the camera to right continuous video files to SD cards 64 GB or larger. Previously the cameras wrote video files in 4 GB chunks which didn't affect the final products but required shooters to speed more time in video post production to string all the needed files together on longer projects. The update also fixes some unspecified, general camera bugs. Joy.

I've updated two XH1 cameras and one XT3 cameras and all are working well. No update glitches I've discovered. 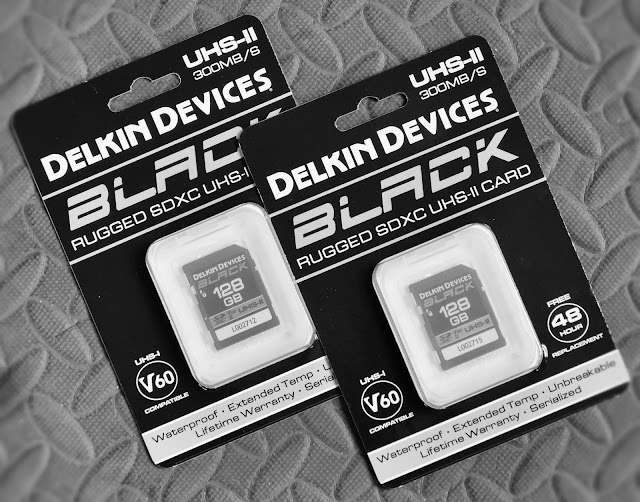 Finally, and apropos of nothing important, I got some push back on my advice that everyone exercise as much and as vigorously as is safe and possible. Several people told me that they didn't have any time in which to exercise. None at all. I asked each person why. Some said their workday was too long. I suggested they quit their jobs and just walk full time until they were in perfect shape. I also suggested that they disconnect their cable TV (never had it, never will) and walk away from their programming addiction. I also suggested to one person, after learning that he "LOVES" to watch sports on TV that he substitute long runs in the place of broadcast football, basketball, baseball, snooker etc. programming.
He was appalled. In one fell swoop I seem to have lost four or five VSL readers.....

( I felt embarrassed for them and did not post their comments).

I felt so badly about this that I headed to swim practice a bit early today so I could get in some extra yards. It was another freezing cold day but we had a full pool of mostly the same faces I see the majority of mornings at 7:00am. All in great shape, all dedicated to the 1.5 hour Saturday swim and all able keep their desire for watching golf and bowling on TV in check. (That last bit about golf and bowling was meant to be a joke. If people are actually spending time watching that instead of doing their own exercise then we just are on such different wavelengths that perhaps nothing I write here would make sense to them. Nothing). After swim practice a small group met for coffee. We talked about training theories and stroke efficiency. It was sublime.

Dammit. I forgot the ads and links again. Oh well...

Posted by Kirk, Photographer/Writer at 16:58 10 comments: