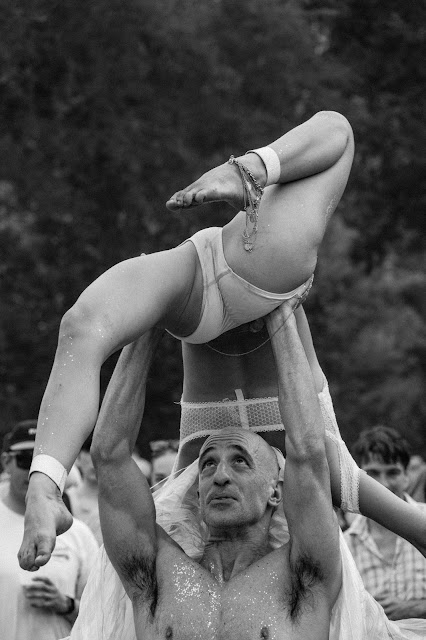 Should we all just buy a Sony RX10 IV and be done with it for life?

Well....sure; why not? But what if I don't really believe that?

Well, no. I started with some Canon FD stuff and then got pissed when Canon pulled the FD mount rug out from under our feet so I gave Nikon a try. The Nikons were fine but I was bored. I tried the Contax cameras. They were good and I was mostly happy until several of them fell apart in my hands. The last film centered system I owned (God! Business was good back then!!!) was a complete Leica R8 system with a couple of cameras and a bushel of R series lenses.

In the medium format realm I bounced back and forth between the Rollei 6000 series cameras and the Hasselblads; at one time owning a fair amount of both. In my defense we were shooting assignments six days a week and it was pretty easily to become comfortable in a bi-system environment. Each system had its set of interesting features.

But the era of camera buying driven by perceived NEED only arrived with professional digital equipment. We started with Kodak DCS cameras but $16,000 per body was hardly a sustainable business model. Happily, the Kodaks used the Nikon AF lenses so the transition to the much less expensive D1X camera was less painful (and thousands and thousands of dollars cheaper). What led me to abandon the Kodak cameras, which had such promise and such great files when shooting at ISO 80? Well, it was probably the 80 shot battery life and the fact that all the early cameras absolutely sucked at anything over 80 ISO. The Nikons were demonstrably better.

I could regale you all day long with rationales for my hopping adventures through the various catalogs of Olympus, Canon, Nikon, Panasonic and now Fuji but I'll cut to the chase to please Mr. R-----.

With the advantage of 20/20 hindsight I should have stopped right here: Nikon D700 (the best digital Nikon ever made.....still) the 80-200mm f2.8 AF-D zoom lens (sorry, no I.S. but no issues with the focal length becoming shorter as one focuses closer as in the later 70-200mm lenses, and just as sharp. And paid for) supplemented by the Nikon 28-70mm f2.8. Yes, you read that correctly. Not the 24-70mm f2.8 but it's optically much better predecessor, the 28-70mm 2.8 which spanks all subsequent Nikon mid-range zooms for sharpness and a general look that is more detailed and confident than anything following it.

The widest lens I ever owned for the Nikon system was a manual focusing 20mm f2.8 that worked perfectly and had minimal geometric distortions even though it was not correctly by voodoo in the camera bodies.

With this equipment I could have done pretty much any assignment that came up in the 10 years since. Many will bitch and moan about resolution but I'm almost certain that in most cases we could easily use interpolation software to increase the overall file size and implied resolution and no one would be the wiser. Toss the D700 raw files at the latest rev of Lightroom and maybe you'd get the same resolution as native 16-18 megapixel files. Plus, the camera just worked all the time and the batteries lasted forever.

Everything since has been like extra cup holders or rear seat entertainment systems for the kids. Fun to have; convenient, but totally unnecessary. I'd go so far to say that if you can't do a job with a D700 and the lenses I listed above (go ahead and add in the 55 macro lens, if needed) using professional, industry standard techniques, then I would say the problem is with the user and not the gear. Professional cyclists don't need training wheels to compete in road races either.

So, what would I have gained? I'd probably have saved (according to some quick glances at my yearly tax spread sheets) something like $40,000 over the past ten years. (This is based on depreciation, deductions and trade-ins). I would know this gear so well that we could always finish each other's sentences.

So, no real differences in job applications, money in the bank (which I would have had to pay income taxes on...), and the thrill of knowing, as I ventured further down the path of image making, that I never took the path less traveled...

If you are inherently a cheap son of a bitch and need to watch every penny I conjecture that you could buy whatever the current top of the line Canon Rebel and two, maybe three of the f2.8 zooms and use them to complete professional assignments for the next ten or fifteen years. You could also watch your diet and wear the same pants for the next fifteen years. Buy a Honda, Toyota or Subaru, do all  your scheduled maintenance and replace everything that naturally wears out and you could drive the same car for 20 years......the seats might be a bit frayed but you'd probably be used to your Spartan existence by then.

I'd rather not shoot with the same cameras forever. I like to try new stuff. I want to see if there's really a difference in dynamic range with new sensors. I like the live view of current mirrorless cameras. I like EVFs better than optical finders (oh! the Heresy!!! Burn him. He must be a witch) and I like being able to inveigle my clients into paying me more money for a bit of video programming on the side.

I'd rather look at the cost/benefit analysis of any purchase through the lens of total net worth; not just the absolute cost of a product or service taken totally out of context.

Gear does wear out. It does become (for a tech forward client base) obsolete. The rise of 4K video and the embrace of this programming by clients is a salient point in this case. There are tax advantages to deducting new gear. But most of all the new gear keeps the game interesting, fun and engaging.

So, if a young photographer is dead broke, can't make the rent, just had his car reposed and his girlfriend finally kicked him out of her apartment then (contextually) buying a new lens (or pretty much anything other than food) is just flat out crazy.

But let's say you are a famous novelist/photography hobbyist with a track record of say....ten bestselling thrillers on the NYT Bestseller's List, you're pulling down a couple million dollars a year. You've paid off your house, you bought your last couple of Bentleys with cash. You've put so much money into your retirement accounts that they are starting to look like the entire yearly budget of a third world country. At what point is it "okay" to drop a few thousand extraneous dollars on a new camera? And even if you are one of the .01 % you are so frugal that you sell off your old camera for 75% of its value on E-bay? Is that okay? Does that make sense? Is that defensible?

I'm sure there are readers here that are watching their dollars carefully. I'm equally sure that a few of my readers could buy their own town to shoot in if they wanted to... The idea that there's a set rule of thumb that requires us to remain in a camera system for life is a concept that lies on a continuum and only makes sense within the restrictions of context.

I don't have a plane. I don't play golf. I no longer ski because I'd hate to have an injury that wipes out walking or swimming. I don't have a drug habit (again, interferes with the swimming). I don't buy exotic cars (unless you are unlucky enough in life to consider a Subaru Forester to be a luxe, exotic car) but I do know that I love to play with new cameras and, in fact, am one of the very few people in our culture who knows how to leverage cameras in order to make income. Should I believe that freezing my gear requirements in amber is a good idea? Not on your life. I point to the intangible benefit of: Joy.

Hell, all of you should get off your high horses and go buy two new cameras. One just for fun and one to thumb your nose at complacency and abject fear of loss.