So excited about the announcement of the new Apple Mac Pro...... 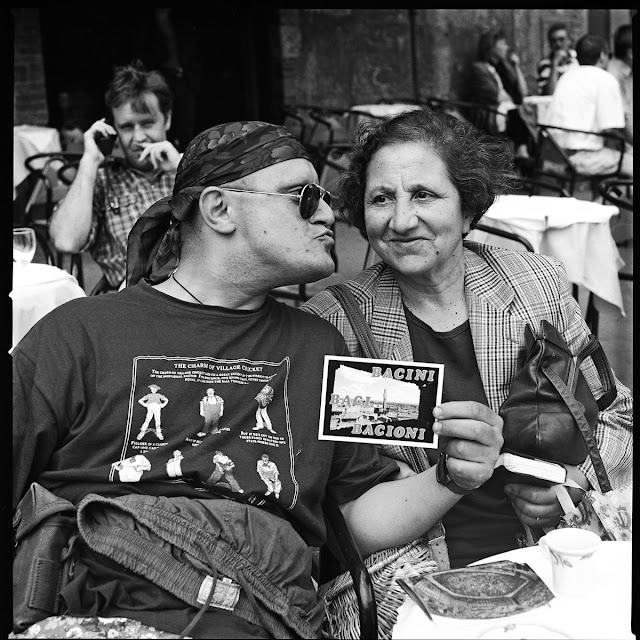 Somewhere in Rome. Working on overcoming my innate shyness with strangers.

For years both the Apple "faithful" and the PC know-it-alls have been screaming, crying and lamenting about all the things that Apple computers "lacked." Now Apple has announced a line of Mac Pros that provide stellar performance, fix all the short-comings and supply all the power and throughput that one could ever want. There's just one problem. They made a product that is far out of the reach of most of Apple's customer base of individual consumers. Certainly these new and pricey and powerful computers will soon populate the dimly lit editing bays of multi-national entertainment companies, the chic movie editing suites, the caves of the motion graphics experts and the gleaming towers of those who render mighty, mighty 3D CADs, but they will probably never grace the modest offices of the workaday photographer or the weekend photo-warriors.

It's not that these machines are too expensive, historically, it's just that like cameras we hit the point of computer processing power sufficiency for applications like Photoshop and Lightroom about four years ago with the widespread adoption of iMacs based around Intel i5 and i7 processors. The multicore versions, along with ample RAM run most studios pretty quickly and make imaging changes about as quickly as one can click a mouse or touch a pad. Now all we really need is faster, better and more ample storage.

I'd love to have one of the machines but I'd love to have one in the same way I'd love to have a medium format camera; not because I need one but for the bragging rights and the idea of having the very best in a category. Do I need a brand new medium format camera to shoot portraits and to document live theater? Not a chance. I've shot shows with one inch sensor cameras, full frame cameras and everything in between and I can honestly say it doesn't make a lick of difference. Could I process a folder of uncompressed raw files quicker with one of the new Apple Super Computers? Sure, but then I'd have no excuse to get up from my desk every once in a while and enjoy a cup of fresh coffee, or witty repartee with my peers.

I think I would be too intimidated owning a computer on which post production is so quick that it's over before I can even start.

But, if I did happen to win the lottery you probably know I'd rush out to buy a couple of the new Mac Pros, and a couple of those sexy new monitors to go with them. Then, like a good Texan I'd also buy new, tricked out pick-up trucks for me and the wife.....and the boy before hitting the ATM and heading to Las Vegas.

For now? I've got my eyes on a new 27 inch iMac (not the iMac Pro, just the iMac) sporting one of the newest i9 processors. Not because I need one but because i9 sounds so much better than i7, and infinitely better than i5......

I know, I know, you can buy all the parts you need to build your own PC for only $99 at the nearest 7/11 and you can put it all in a beige box nearly for free. I'll get back to you as soon as I finish building my own car......

Any body here really in the market for a Mac Pro? Just curious what your rationale might be.....
Posted by Kirk, Photographer/Writer at 22:53 16 comments: