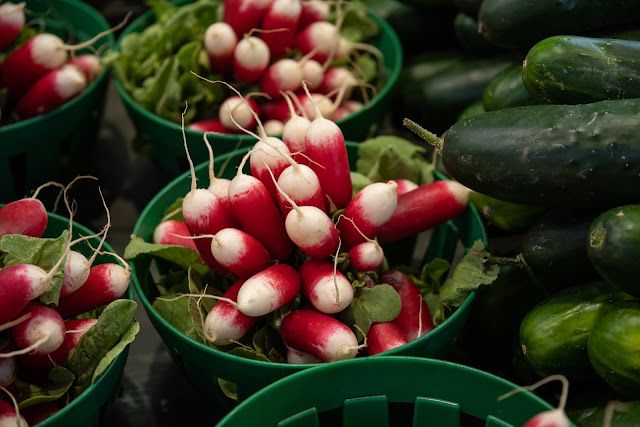 visual problem solving as food for the brain. Images for the heart.  I wonder where radishes fit in?

I've been doing some back of the envelope calculations about why I photograph. The math never really seems to add up. I suppose that after doing so much photography for a living that there's a momentum that keeps me reflexively looking at the world through a camera; but I'm not sure it's a healthy fascination.

I know that I started taking photographs because of the obvious and largely unconsidered desire to make visual images of the beautiful people I was surrounded by in my late teens and early twenties. So, in fact, my photography has always been driven, from the beginning, by the content and not by either the craft or the lofty ruminations of art philosophy. I bought my first "real" camera in order to take photographs of my girlfriend at the time. I thought she was amazing.  For one period of my life cameras lasted longer than some of my relationships. The girlfriend moved on but the camera stuck around to continue the process of documenting a series of subsequent relationships. Unthinkable in contemporary life where I've been with the same person for nearly 40 years but have changed cameras (as some wag recently wrote) almost as often as most people change their underwear.

I came of photographic age at a time when culture was changing and intimacy, nudity and even the way we defined and described human beauty came out of the shadows of puritanism and became progressively more mainstream --- at least in the university communities in which I lived at the time. Photographing the beautiful face of a person with whom you were also in love had many facets of reward. From having photographic subjects that were almost universally appealing, to having the photographic print with its ability to bring to mind immediately the shared experiences with a person who, in turn, was as interested in you as you were with them. It was a virtuous loop of positive affirmation and happiness, and the photographs were the ongoing souvenir of your object of satisfaction and joy. A reminder that you belonged somewhere. That you belonged with someone.

With this in mind (the experience of making desirable photographs of beautiful people) why would I ever consider landscape or travel photography? Where's the reward? What's the value? Nothing really has the photographic dopamine hit of being able to look at an image of your lover's face and re-appreciate the warm and happy feelings incorporated and expressed there...

As I hit the 30 year mark in commercial photography I've found it harder and harder to stay motivated to do my own work. Maybe the pressures of having to produce on command trims the edges off the endurance required to do work for someone else, in a specific fashion, and then turn around and produce work on cue for one's self. At the end of a long day dragging clients from cliché to acceptable it's a wonder most photographers aren't just sitting in their parked cars weeping and wondering why they chose such an awful way to eke out a living.

But something equally onerous seems to happen as we get older. We've seen so much stuff, at such a relentless pace, that sometimes it feels impossible to do any (personal) work that doesn't seem like a redundant copy, a bad derivation, or a worn out meme when we do pick up our cameras. Nearly every street scene, landscape and abstraction we come across seems to reinforce the feeling that we've been there; we've done that. It's a feeling that goes a long way toward dampening one's enthusiasm to march around with a camera and attempt to make "Art."

The final straw, also aging induced, is the paralysis of understanding that the majority of your life (statistically speaking) is now in the past and the time left is neither guaranteed nor able to be decelerated. If you now have the time and means to pursue the project of a lifetime then the question becomes "which project should it be?" How does one decide between all the competing possible photographic adventures when the catalog of possibilities is laid open in front of you?

Recently, with my attention turned away from the business, I slowed down my engagement with both the work-work and the "fun" work. It gave me the opportunity to be a bit more clear-eyed about my trajectory and my motivations.

I've come to realize that, for me, the secret to staying motivated is to reach all the way back into the past and connect with what brought me to photography in the first place. That would be making portraits, for myself, of the beautiful people in my life. They are no longer all young, no longer filled with innocence and brimming with enthusiasm over something as ephemeral as potential, but most have become, in their own ways, even more beautiful and alluring, having been dusted with the patina of time and experience. I find that their eyes are now more expressive, the stories they tell more nuanced, and most have come to terms with their look and their physical presentation so that facades are easier to pierce and discard and now we can collaborate on illuminating a combination of experience and intrinsic beauty.

I've started having prints made again. I'm putting images into small books and making prints for the wall behind my office desk. It's nice to see the physical manifestation of my work without the dependance on a computer or phone...

Another project is one that my wife and I are working on together and that's to make photographs for the house. Lately, we've been attracted to produce markets. Our current project is to make lots of food images from which to "curate" a small number that we'll turn into prints and put on our dining room walls. Something we talked about for years....

The art director + photographer .... it's like the barefoot children of the village cobbler. We've been so busy making content for clients that we almost forgot what it was like to do art for our own enjoyment.

So, the process of re-energizing motivation is as "simple" as getting in touch (and re-interpreting) your own photographic "origin" story and then filling in around the edges with different work you create just for yourselves. I guess that's why they call it "personal work."

Posted by Kirk, Photographer/Writer at 15:00 14 comments: