The Social Contract: We happily agree to meet and talk to each other. Which also means: We will not be checking our phones, our watches or our Google Glasses. Leave all that crap in your car... 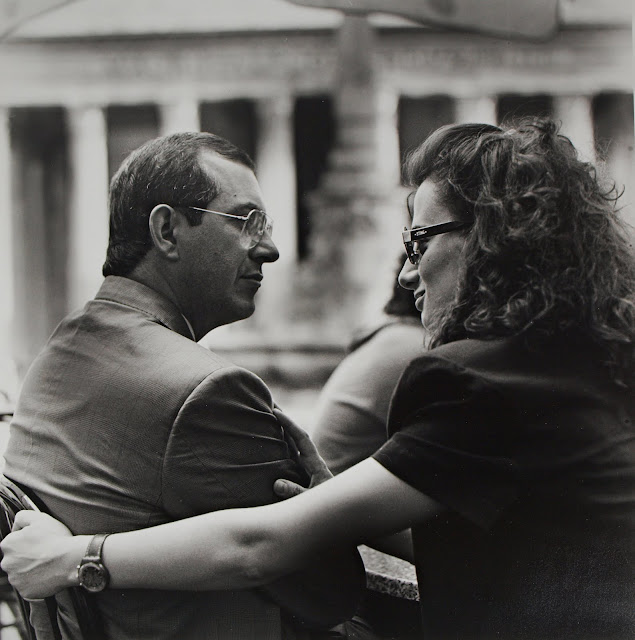 I wholeheartedly agree. I miss engaged conversation with insightful comments and thoughtful replies!

Talking and coffee shops go so well together, it's sad to see most of the tables taken up by people whose workplaces are so depressing that they have to come work in cafés and hog all the seats. I wish they'd double up at least, free up some tables.

One of the saddest things I see is a parent out with their young child in a restaurant or at a playground and all the parent can do is bury themselves in their electronic device. The poor child just wants their attention and love but even after repeated attempts to break the spell of the device they give up. The sad look on their faces is heartbreaking.

I sat beside a father and young daughter in a fast food establishment where just such a scenario was playing out. The poor little girl was almost in tears while her father ignored her and continued playing some video game on his phone. So I struck up a conversation with the little girl. She was elated and proceeded to tell me all about her day and the names of all her little toy figures. It probably took her dad close to ten minutes to figure out he had been replaced by a total stranger. Sure he may have had a number of excuses for his behaviour. I was a single parent of two very young girls so maybe I felt where he was at. I am sure if there were devices then that we have now I might have felt tempted to retreat into my own world thinking that was how I could heal myself. Thank God there were no such things then and I found constructive ways to heal and get through the day.

After he gave me crap for talking to his daughter I explained to him that I wouldn't have if he would just put his phone down long enough to return some of the love his daughter wanted to share with him. I explained how his emotional absence not only broke his daughters heart it upset having been a father of two daughters who were once that age. I shared with him how the time is so fleeting and special. Why willingly waste it on a video game I asked him. Couldn't it wait until after she goes to bed? Hopefully once his rage with me subsided he would reflect on how his addiction to his device is separating him from meaningful human relationships. Yes I can be a dick I guess, but we as a species are loosing our ability to connect with other human beings in a positive and mutually beneficial way.

She waved to me as her dad hauled her out to their car. I'm sure he gave her a lecture about talking to strangers.

In our house if you come over to visit, your device stays in your pocket, purse whatever it is you have, with the sound and vibration turned off. The ONLY exception is if you need to have your device active because someones life depends on it.

I am retired for the most part. During the day I leave the sound turned off. I check for messages several times a day, when it's convenient for ME. Back in the day I had someone who would take messages for me. I would review the stack at least 3 times during the day. The important ones would get returned when I had the time. It worked really well and I feel business and the world in general did just fine without being connected to each other all day long.

By todays standards I am a heretic. A happy, healthy, low blood pressure and thoughtful heretic. It's nice having time to think about what you want to say rather than feeling pressured to respond immediately.

Bravo to Eric. That's exactly what I'm talking about. Put the freakin device away when you've invited another human to join you in an activity of any kind. Simple rule.

About 47 years ago, when I was dating the woman who is now my wife, she was willing to leap over furniture to answer a phone. Technology has changed but she really hasn't and it mystifies her that I don't check my phone every time it beeps at me. "But what if it's important?" she asks. "Dudette, it's never important" I respond, and then we just look at each other because neither of us really understands why the other one just said something stupid.

I was working in a jewelry store during Christmas rush, doing a 'free' service for customers..
Long line of folks and when I was ready for next one, she held up her hand in my face as she took a cell call..So i moved back in line and served others..Loudly she complained about being next! I pointed out that it was company policy. not to bother customers with 'important" calls..Truthfully it was not! My boss agreed it was now our policy..!
I find having a chat with someone whose focus is elsewhere, is insulting and crass.
I have left many a coffee table and gone on with my street photography..

One day someone will hack into the network and shot he internet down for a few days. I bet that at least 10% of the population will commit suicide at this point. Should open up a lot of jobs for those not addicted to continuous online life.