Just a print to sum up the end of the week. How I'm feeling in the moment... 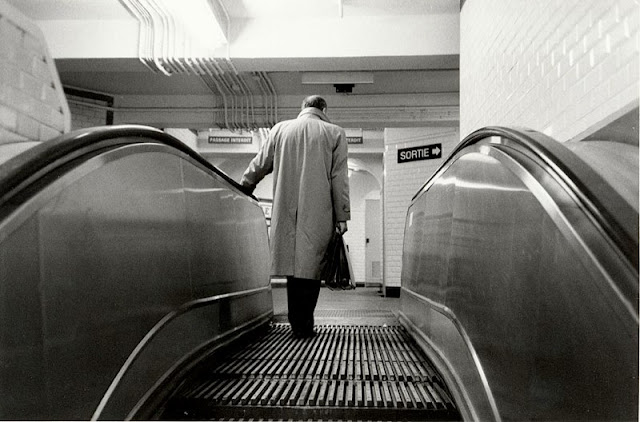 Posted by Kirk, Photographer/Writer at 18:02 5 comments:

Opening another box of prints and looking at past work. Yes, the edge print is real, not digital... 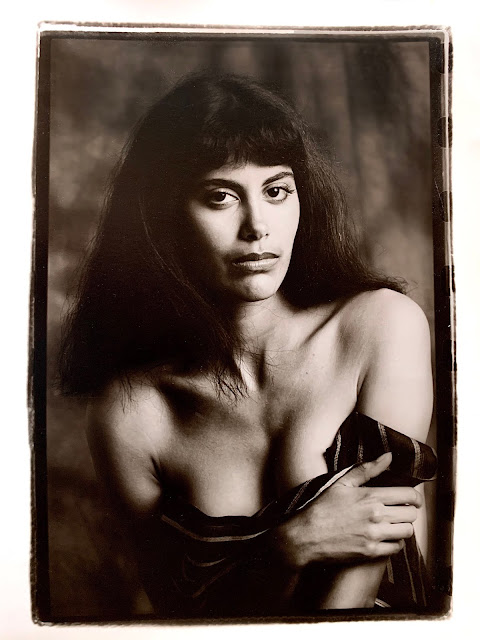 This photo was taken in the early 1990's in my studio on San Marcos St. in east Austin. Renee and I were shooting just for fun and then I was using the images to work on my printing. Before clients beat it out of me I loved making portraits with large pools of dark tones. If I used fill light at all it was in the form of a passive reflector and not a light at all. Most of the time I moved the reflector so far away that I ended up with no detail in the shadows; and that's how I liked my prints. Once I'd logged enough "client hours" I knew I'd have to shoot with more shadow detail. Killing my preferred style slowly, a session at a time.

I used a 90mm-R Summicron on an R series body to make this image and I'm pretty certain I was using Agfapan black and white film at the time. Probably Agfanpan 100 souped in Rodinal developer, diluted 50:1.

I know I printed it on Seagull Portrait paper because this photograph is just a quick copy shot of the actual print and I can tell a toned Seagull print from everything else I've printed on. The copy capture added a warmer, browner tone to it that will make some people think that the paper was Agfa Brovira or Agfa Portriga Rapid but no.

When I look at this image I remember that we had a lot of fun and took a lot of photographs but what it really makes me think about most is how great it was to have such a large studio at the time. I was able to shoot 35mm film at a middling aperture, and with a fairly short telephoto lens, but still able to drop the background nicely out of focus. It's because I could put Renee as far forward from the background as I wanted to.

I mentioned the edge print because everyone whose printing experience only extends to digital probably doesn't even know why photographers printed with the edges of the sprocketed film showing. We did it mostly to prove that we were able to compose without after-the-fact cropping. That we were printing the full and unvarnished content of the negative.

To achieve the effect it was necessary to take a negative holder (and most were machined to fit the exact live area of the negative and NOT the edges) and file it out on all four sides so one could see the edges, and in some cases, the edge print of the film. Digital "artists" copied this idea and made endless actions people could buy in order to translate a physical attribute of analog film production to their more clinical digital images.

The position of the negative in the holder could vary from print session to print session so that now two sessions produced exactly the same edges.

I loved working in the dark room but I find ink jet printers to be less that fun. I still print the occasional ink jet print but always under self-imposed duress. It's not the same. And paying for ink sucks.


Posted by Kirk, Photographer/Writer at 15:49 6 comments:

Staying in decent shape so we'll be able to haul cameras around again in the hot Summer. If and when the economy re-opens in Texas. 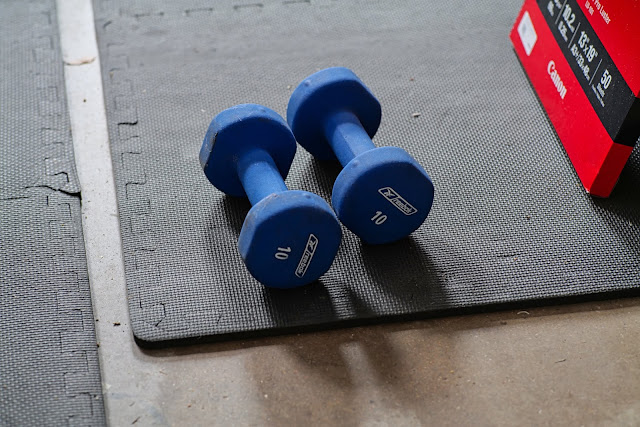 Recent studies show that sustained, aerobic exercise is the only sort of exercise that restores telomere integrity which is associated with retarding aging. Great! So we just hop in the pool and knock out some yardage, right? Well, tragically, all the pools and public swimming areas in Texas are closed down, so no swimming. I guess you could hop in one of the recreational lakes but do you really want to take your chances with drunk Texans and speedboats?

So we've been running. Which works for those crumbly telomeres but isn't nearly as much fun for me as a good swim.

I've got two routes figured out at the Butler Hike and Bike Trail here in central Austin. One is a three mile loop and the other is a 4.9 mile loop. This morning I was up and on the trail doing the three mile loop by 7:15. I'm  happy to report that I encountered about 15 serious runners and a couple of walkers over the entire 38 minutes I was on the trail. Additionally, we were almost a satire of safe practices. Runners hung close to the right side of the trail leaving ample passing space on the left hand side. People passing called out crisply: "On your left!" as they sped by. That helps with overall situation awareness and prompts people who have a tendency to drift left to course correct.

But with all this running and no swimming I am worried about maintaining strength and muscle mass in my upper body. There are some easy ways to exercise the bigger muscles with my two favorites being planking and push-ups, but lately I've noticed that no matter how much broccoli I eat my biceps are not getting enough workout to maintain good form so I added some weight training. I don't use heavy weights because I don't want to over build mass; I use lighter weights with much higher repititions to gain strength without adding too much bulk that could impede swim function when my access to the pool returns. Big, tight muscles create their own resistance and make swimming more difficult...

The weights I've been using for bicep and tricep "curls" are 10 pounders and I do 50 reps per arm in  the morning, after the run, and then another 50 at the end of the work day. Same with the triceps curls. It's not my favorite way to train but it sure helps keep the weight down and the muscle mass up. Plus, they are cheap and easy to use and you can train with them just about anywhere.

Finally, with a few velcro straps they make for good light stand stabilizers. Not as handy as a sandbag but almost.

I'm upping the aerobic stuff to seven days a week, alternating the 3 mile loop and the 4.9 mile loop from day to day. If you are a good walker and want to take a stab at running you might try doing it in stages. Start with a slow run until you are out of breath and need a break. Walk briskly while taking ten deep breaths and then run again until you need to slow down. Repeat this for a week or two and by the end you should be able to run longer continuous distances. I like interval training because I'm inherently lazy and like little breaks. A walk/run three mile loop is a perfect starter distance. Once you can go the full distance without a walking break you can move on to running a bit faster each day. Or you can just enjoy the same run at a comfortable speed.

Being fat/overweight/obese seems to be a prime indicator for who will die early so you might think of a good running regimen as an investment in staying alive....

A quick note about the Leica 90mm Elmarit I've been playing with. I'm a sucker for test photos that show the full frame and then show a 100% crop. But I'm sloppy about getting an exact crop. Whatever. Here is a quick, early test shot of the armrest of an office chair along with the mandatory crop in. This was shot handheld, wide open at 1/15th of a second using an S1R with its very good image stabilization. I don't know if you can derive anything from the images but I'm convinced the lens is really good. But then, most are. 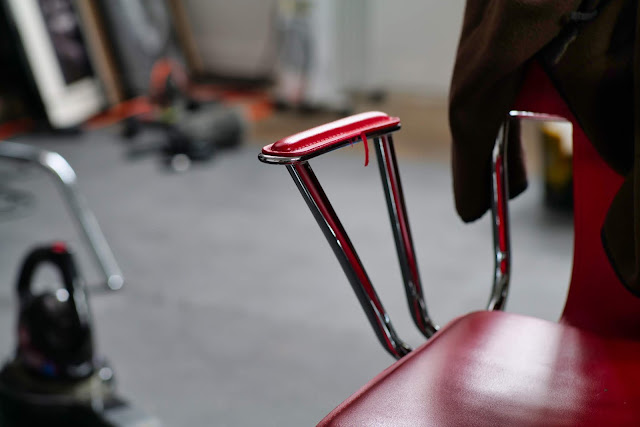 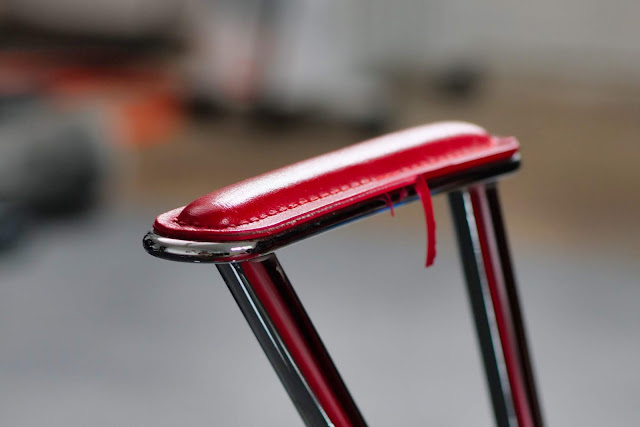 I called my doctor today and asked if I should inject or ingest bleach or
other disinfectants to prevent disease. He contradicted our president and told me that
this was not a good course of action. That I should under no circumstances
ingest, inhale or inject bleach or any other disinfectant.

I was amazed to hear that doing so would cause permanent damage
and quite possibly (probably) death.

Since my doctor is smart, rarely ever wrong, is board certified
and graduated from medical school I decided to believe him instead
of listening to advice from the president, whose expertise is in selling
real estate.

If you like the blog I implore you not to use the bleach or disinfectant for anything other
than cleaning surfaces or getting skid marks out of your tidy whities.

I need to keep all the readers I have.

Posted by Kirk, Photographer/Writer at 11:16 13 comments: