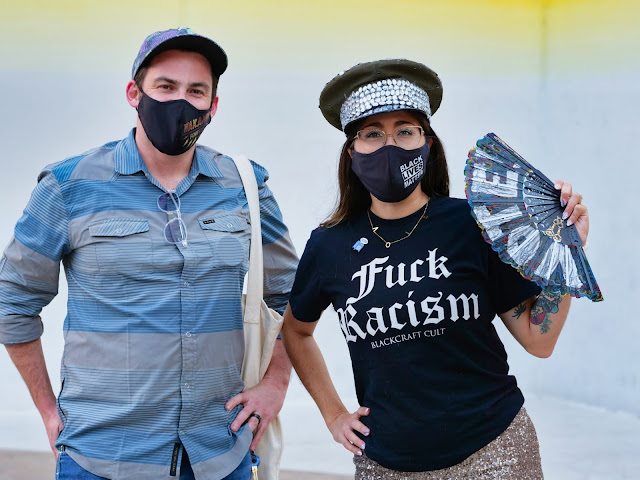 They passed the intelligence test.
How can I tell? They're wearing their masks.
They are protecting me while I photograph them.
It's the opposite of selfish.
also, they are not screaming obscenities at me from the cab of
a pick-up truck....
Posted by Kirk, Photographer/Writer at 12:28

Zooms Versus Primes All Over Again. But with a 2020 perspective. 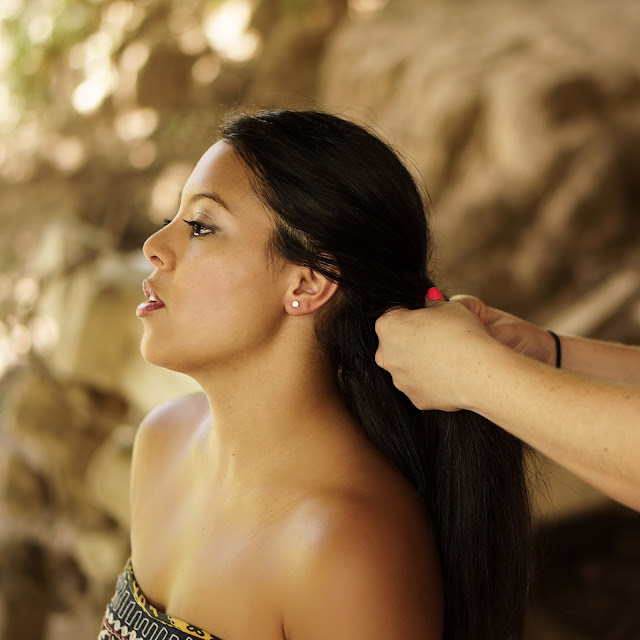 Noellia at Zilker Park.
50mm Sony lens on an APS-C Nex7.
While growing into photography and all through my career I've understood the underlying truth of lenses as being tools subject to a strict divide; that the very best optical results always come from prime/single focal length lenses while zoom lenses are useful for convenience and, while constantly improving, zooms will never, ever be as good as the best primes. The law of lenses was demonstrably true when I started in photography in the 1970s. Today, maybe not so much.

Back then you had three choices: good single focal length lenses, cheap and crappy zoom lenses or expensive and....usable zoom lenses. As zoom lenses improved there was a new thought wrinkle tossed in to appease the hurt feelings of people who really, really want to use zooms. It was a new amendment to the law which postulated that while zooms would never match the performance of the same range of individual prime lenses the shorter the zoom ratio the better your chances were of getting something decent out of your zoom. But the new amendment was always greeted with the sideways look of disdain and the assumption that pros and real artists always pulled a prime lens out of their bags when they were aiming for perfection.

Change comes slow when it's wrapped in unsubstantiated opinion. Somewhere in early 2000's camera makers started producing zoom lenses that gave film era primes a decent run for their money. In particular the optical performance of the more expensive 28-70mm f2.8, 24-70mm 2.8 and 80-200mm f2.8 lenses took a big leap forward. Followed by several extra-wide angle zooms. I remember being surprised and impressed by the first Canon EOS 20-35mm L zoom and then again by Nikon's 14-24mm zoom. For the first time these zooms actually produced better images (in most regards) than some of their contemporary single focal length brethren.

Ten years later the dam burst open and the majority of photographers opted to make the "holy trinity" of zooms (16-35, 24-70 and 70-200, all f2.8) their first choice for professional tools. But in spite of this lens makers continue to design, make and offer ever more complex and performance intensive primes. And some of us keep buying them. It makes me wonder where the truth lies. Or if there are different truths for every user.

In my mind, given the wonderful quality I'm getting from the Panasonic S-Pro zooms, and the great optical quality I see from Canon and Nikon premium zoom lenses, I'm starting to wonder if the only reasons to own prime lenses anymore are for situations that call for very fast apertures (and every new prime seems to be entered into a race for the biggest maximum aperture) to create very, very narrow depth of field or....for bragging rights created by the enduring presupposition that the primes are "always" better.

I sometimes allow myself to be seduced by the promise of almost infinite quality available from some prime lenses. How else to explain the expenditure of $2300 for the Panasonic 50mm f1.4 when I have a perfectly serviceable Sigma 45mm, a Zeiss 50mm f1.7, and a few other adapted 50s; along with two different, high quality zooms that cover the same 50mm focal length. I've never had occasion to use the S-Pro 50mm for any commercial assignment at anywhere near its maximum aperture and while I like the manual focus clutch mechanism it's hardly worth the money I paid for the lens. I understand that if I had a style of photography that was dependent on shooting everything wide open this would be a good solution for that focal length but therein lies the rub.

There are a number of times that I do want to shoot with a fast lens wide open but usually it's not at the focal length of the lens at hand. I might see a shot that would look great at 30mm or 90mm or 75mm or 22mm but which looks boring at 50mm. It's true that I could buy lenses that are approximate to almost every focal length I might want to use but I'd be carrying around a bag (or several bags) with dozens of pounds of lenses in it. And then I'd have to sort through the selection, find the right lens, remove the existing lens from the camera, place the chosen lens on the camera and then watch as whatever subject I was getting ready to photograph exits the area and vanishes altogether. Wholly un-photographed.

Many photographers of my age (plus or minus ten, or even twenty years) point to the work of Henri Cartier-Bresson and announce that he did quite well as a photographer and only used his 50mm lens 90% of the time. The implication being that HCB declined to use zooms or even a big range of lenses because he found them unworthy. The reality, I suspect, is two fold: First there were no zooms available in the time period during which he worked, and secondly, he traveled extensively and often declared that he worked best when he packed lightly. He was concerned not with getting the perfect shot but in capturing the perfect moment - which is a much different thing. He was also intent on navigating through public spaces in the most anonymous and discreet way possible. One small camera clutched by his side in one hand so as not to call attention to himself...

I find myself in a quandary created by my own situation of having a foot in each camp; mostly as a result of living through the tumultuous evolution of lenses. From the primacy and availability of single focal length lenses to an age where zooms are ubiquitous, accepted, acknowledged and mostly given parity with primes by all but the most dedicated or deluded photographers and clients.

How else to explain it?

I raise the question after using a number of zooms over the past few weeks. And most recently after having used the new (to me) Panasonic/Leica 50-200mm f2.8-f4.0 zoom on a GH5. While I have a bunch of random primes for the m4:3 system the two most recent zooms, the 50-200mm and the 12-60mm Panasonic/Leica lenses, are giving me results that are every bit as good or better -- from a photographic standpoint -- than the prime lenses. The only real benefit I get from the primes at this point is the ability to use wider apertures for pictorial effect. But that's profoundly offset by the ability of a zoom to cover so many focal lengths well.

I laughed to myself the other night. I had a 16mm f1.4 Sigma lens mounted on my GX8 camera and I was using the combo as a fourth video camera for a project. I presumed that I should be using the fastest lens possible until I thought through the process. I would be pre-focusing the lens to cover a range and then turn the camera on and leave it unattended for an hour. It would crank away creating endless 4K video files. But you already see the disconnection here, I'm sure. How on earth would the fast aperture (even if it's crazy sharp) help me keep a fairly wide range of performers in acceptable focus? Of course shooting at f1.4 would be silly. I selected f4.0 instead and focused carefully so the plane of sharpness would start at the closer performer and progressively fall off behind her. But since she was at 18 feet the f4.0 aperture would just about cover both her and the two performers on the other side of her. At f1.4? Not a chance. But at f4.0 the performance, especially for video, would have been equivalent with a zoom.

When I talked to a friend about the same project and about my frustration at not getting great close-up shots of performers (mostly from a compositional point of view) from a long distance he immediately suggested that I needed to get a 300mm or 400mm f2.8 lens for the full frame system and that would take care of my problem. There were a few issues with that solution. Either one of those lenses would cost me half the price of a new car. But that wouldn't matter since neither focal length is available for my system. And either choice would be extremely heavy. I'd need to buy a much more expensive video tripod and head to hold it all.

Since either lens would have a fixed focal length I'd have absolutely no control over composition as the performers moved closer and further away from my fixed location. Changing lenses during the shoot was a non-starter concept as the performance ran continuously and the video needed to be continuous as well. A fast enough zoom on a smaller format was exactly what I needed and having the ability to go from a mild telephoto point of view to an extreme telephoto one with the turn of a ring was just right.

Of course, there are times when the fast primes are just what the doctor ordered but those times are quickly getting narrowed down by the ever increasing positive evolution of zooms combined with better and better camera sensors.

Just thinking here but are primes destined to follow VHS tapes to the trash heaps of history? Will photographers continue to buy expensive, heavy and fast primes after zooms catch up with current prime lens performance? For many of us the real (and embarrassing) question is whether even our current (lack of) technical skills all but mask any current optical advantage of primes over zooms.

So, hypothetical: If you dropped me into some beautiful city and tasked me to make great images would I rather have a bag full of primes or one really well chosen zoom. Would I go with one body and one lens? Something like an S1 and the 50mm? Or a Leica digital rangefinder and a 35mm? Or would it be something more flexible like the S1R and a wider ranging zoom like the 24-105mm?

With the primes one might find oneself ignoring anything that didn't fit into the provided frame. With the zoom you'd have more options for composition but fewer options for really low light.

You can only carry so much. You can only make so many compositional selections. What is the right mix and, are we even asking the right questions?

I have a foot in both time periods. Both sides of the prejudice. I loved my Leica M3 with the 50mm Summicron. I took one to Paris as an only camera and had a blast not having to make too many choices. But then again, I loved the Sony RX10 3 with it's 24-600mm lens (which was remarkably good!!!) and the opportunity to shoot just about anything.

I'd be curious to know where readers stand on the issue. Or if there is really an issue or whether I'm just making another mountain out of a mole hill.

Posted by Kirk, Photographer/Writer at 11:25 29 comments: