Using external monitors on a photo shoot is a sensible part of staying safe. For everyone. 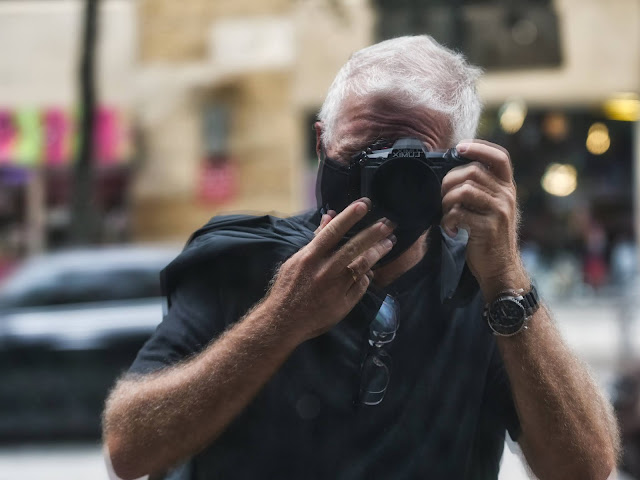 Video shooters have a specific use for external digital recorders/monitors.  Not only can they see the flow of images larger and with more focusing and exposure tools, they can also record higher quality video instead of video that has compromise baked in by the camera processors. It makes sense. But why would photographers want to use high quality external monitors on their shoots?
We just wrapped up a second day of photography for a biotech company. We were shooting in a large conference room and we were trying to make sure everyone was safely distanced from each other. In the olden days of photography, while shooting still life images, we might have tethered our camera to a laptop so that clients could see the images we were making at a bigger size. But I always found tethering to a laptop to be far from satisfying. Sure, instead of gathering around to see the screen on the back of the camera people would gather close together to see the photographs come up on the laptop. And laptops were slower, kludgier to use, etc. than just blazing away with one's camera....
But it dawned on me one day that we could press a high quality, external monitor into photographic service with ease. All we have to do is plug one into the HDMI socket on our camera and we instantly have access to a big, bright, and low latency monitor for our clients. The screens can also run a long time on standard Sony-type batteries. The generics versions are dirt cheap.
I can run a cable to a monitor up to 30 feet from the camera. But the more interesting thing about using an HDMI monitor instead of a laptop is that external HDMI monitors can be "daisy chained" and you can provide multiple viewing stations on a location. All you need is the cabling and monitors that have compatible HDMI "in" and "out" ports.
Lately I've taken to bringing along two Atomos monitors. They are also made to record video but I don't even bring along SSDs for them since they don't write Raw photography files. I use them strictly as monitors.
Today I got a wild idea. I remembered that we bought an Aputure monitor a few years back just to show clients stuff in the field. This monitor is smaller and lighter than a laptop and since it was so cheap I have no qualms about tossing it into the camera bag or rolling case and dragging it along everywhere. And....wouldn't you know it...you can put it into a daisy chain with the Atomos monitors as well.
So today, in addition to the camera's rear screen we had three viewing stations staged around the room in order to give any member of the marketing team their own, distanced viewing solution. It was a great way to keep everyone in the approval chain engaged while keeping the space around the camera open and relatively safe.
Since it was strictly a still life shoot we were adamant that everyone wear their masks at all times. No exceptions. And since it was 80° in the great outdoors today we ate lunch outside, on the grass, under some big shade trees.
All good.
Posted by Kirk, Photographer/Writer at 19:29 7 comments: