Back in the groove today. I photographed at my favorite law firm. The "Covid Security" was amazing. My first commercial, location project in a month. 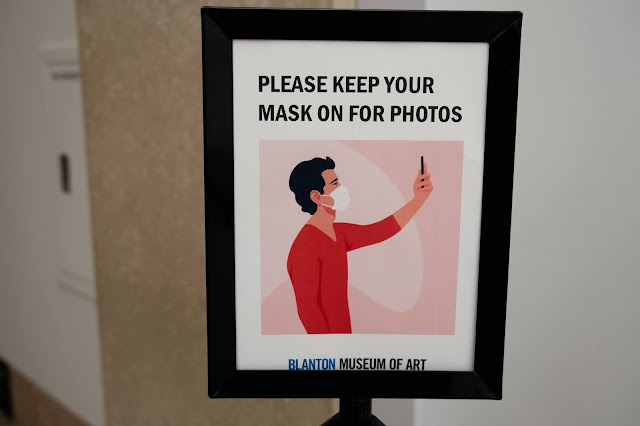 Clients can remove their masks once all the lighting tests are done and we're ready to make photographs.

Cabin fever is weird. I find myself sitting in front of the computer looking for cool stuff to buy. More or less momentary relief via Shopping Therapy. Yesterday I hit on the idea that I'd be happier with one Leica SL2 than one each of a Panasonic S1 and an S1H. I e-mailed the buyer at my favorite camera store and he shot over a trade-in value for the pair, against a shiny, new Leica SL2.

That engendered the usual bout of hesitation and indecision. On the one hand the Leica seems pretty darn cool. On the other hand it seems to do just exactly what my Panasonic S1R already does, and does really well. And the S1R has already been paid for and well tested. The concept behind this proposed transaction was deeply flawed. I'd be using the same lenses on the new camera so not much would change vis-a-vis image quality. I'd just have....a shiny, new Leica.

I decided to ponder it further. Maybe I'd head over to the candy store camera store after a quick job I agreed to do for my favorite law firm today. They got in touch a week or so ago and needed to do a new group shot for the top banner of their website. They also had a new partner that needed a headshot and some environmental portraits.

We discussed the elephant in the room; the covid virus. In all there would be six people in the group shot. And then the one person who needed his individual portrait made. They each have large offices on a floor 20+ stories up. They have the whole floor in their building. Each attorney has a huge office and their conference room is large and airy. So far so good. Several of the attorneys are near my age and are clearly worried about the pandemic and their own mortality. Several have already been through both rounds of vaccine doses.

They agreed that everyone would be masked on my arrival and, since I'd photographed there before many times, they would just leave me to my own devices in the conference room setting up lighting for the group shot. I wore two masks today. The one closest to my face was a KN-95 which fit good and tight. The second mask was a black, multi-layered cloth one. I kept a spray bottle of Trader Joe's excellent hand sanitizer in my back pocket.

The first part of the whole gauntlet was getting into the building. Few people were working in the building and my arrival was scheduled for 11 a.m. There weren't many cars in the parking garage and the elevators to the underground walkway between the garage and the building proper were completely empty. I had to call security to actually have them electronically unlock the subterranean access door to the building. Then I had to go to the security desk, have my temperature taken (for the third time today), sign in, and wait for the freight elevator. I rode up the 25 floors alone. Well, I did have my faithful cart with me. I got off the freight elevator and switched to the law firm's private elevator for the trip up the next three stories.

When I got off the elevator everyone was sequestered in their offices with their doors shut. I let one of the partners know I was there and then headed into the conference room to construct my lighting set up. Two electronic flashes into matching softboxes set over to one side of the room in order to keep reflections out of the large windows.

I brought along one primary camera and two lenses. The "A" camera was the Lumix S1H and for the group shot I used the very exceptional, Lumix S-Pro 24-70mm f2.8 zoom. The S1H was one of the cameras I'd considered trading in. I thought it would be a good reminder of whether or not I really liked this camera or if I would feel no remorse trading out. I also brought along the Sigma 85mm f1.4 (new version) for the portrait work. (Yes. I brought a back-up/emergency camera. It was the Sigma fp...).

We got through the group portraits in about five minutes and I exiled everyone from the conference room so I could re-set the lighting for a single, formal portrait in solitude and calm. When I was ready I rounded up the new lawyer and made some shots with the lighting set up in the conference room and then we roamed around the public spaces to get some "B" roll photography that their web designer will use on that attorney's page. As soon as I finished everyone apparently left the office to head back home. They really only came by to have photos taken.

I said "goodbye" to the last remaining attorney; he was waiting for a package to be delivered, and began my lonely journey through a near empty office building back to the glitzy and glamorous Subaru Forester and packed the stuff in. I took a moment to spritz my hands with good smelling sanitizer then removed the top mask, re-spritzed and then removed the bottom mask. I was back home in minutes. There really are very few people working in downtown so the dreaded traffic is, strangely, not too dreadful.

When I edited through files in Lightroom I was chastened by just how good the files are coming out of the S1H. And by extension the rest of the S1 series cameras.

By the time I'd scrolled through the individual portraits taken with the Sigma Art 85mm I was metaphorically kicking myself for ever even considering such a foolish camera trade deal. I chalked it up to boredom and mental lethargy and wrote a note for the bottom of my computer which reads: "Stop Buying Toys." And a second note that reads: "Don't Buy Stuff, Do Stuff."

That's the first job I've done for anyone since the last video I shot over at Zach Theatre on December 6, 2020. I'm glad to see I have not forgotten (yet) how all this fancy gear works.

The S1H is a remarkably good camera. I'll keep it. Now that I have my note on the computer I feel like both the camera and I are on safer ground. Learning lessons over and over again is so much fun (sarcasm strongly implied).

Posted by Kirk, Photographer/Writer at 16:25 9 comments: