Fine-tuning the vacation system. Looking forward to days of sightseeing and photography. Before every vacation....oh, who do I think I'm kidding?....before every job, road trip, day out to the park I am plagued by having to decide which camera and lens(es) I'm going to select to take along with me. I am loathe to sell off stuff anymore even when it becomes clear to me that I've lost interest in it because I have a miserable track record of then missing what I've sent away only to have my resolve weaken, and in some cases even buying a new copy of the very thing I disposed of earlier. It's not a good way to build systems or keep a tight grip on money. But it does seem to be a pattern.

Lately I seem to be operating with more logic and resolve. I've been very good about dividing my photographic gear into three discrete categories. They are: video tools, work tools and personal tools. These categories reflect, for the most part, how I end up using the various cameras I am lucky enough to have held onto.

The video cameras are represented by my micro four thirds cameras. Specifically three Panasonic camera bodies: The G9, the GH5ii and the GH6. In my mind their highest and best use is for video production. They have tremendous powers of stabilization, the lenses available for them are great and well suited for shooting video and two of the three represent the state of the art when it comes to codec and format choices. Adding in the audio interface and the great slo-mo abilities and, for commercial work, they tick all the boxes.

The video system is supported by a bunch of good lenses. In fact, one of my favorites is the Leica 42.5mm f1.2 lens, the results of which are represented here in the blog post. There are several Pro Olympus zooms as well as the Leica 12-60mm zoom and the Leica 25mm f1.4 (fixed after publishing. Thanks Helmut). Since all three cameras can run on the same batteries and take the same lenses it's a great closed system with good back-up resources. It's the system I'll shoot with for my upcoming testimonial video project.

The work system includes the cameras I use for corporate portraits, still life shots of products, lifestyle and environmental images. My main cameras in this "work" system are the Leica SLs and the SL2 but I also press the Lumix S5 and the Sigma fp into service from time to time within the same compartment. I have ample lenses to support this format and use profiles as well.

And then we come to the personal tools which I'll also couch as the "vacation system." In this category I've pretty much landed (at last) on the most recently discontinued system; the Leica CL. But in this regard ( APS-C ) I've always been conflicted about lenses. Recently I've dumped every single lens I've bought over the last year or so for this system and have rebuilt the inventory from scratch. I tossed all the manual focus lenses, all the weird and slow optics and all the stuff that was redundant. I finished my last acquisition for the system today. Now the whole of my "play" cameras fit in one smallish bag.

Today's purchase was the 16mm f1.4 which is the full frame equivalent on a CL of a 24mm lens. Something that's wasn't my highest priority but then again, I am learning to love the wider angles more as time goes on... I blame my smartphone's wide camera lens...

The system now consists of two black Leica CL cameras and four lenses. All the lenses come from the Sigma Contemporary product line and include: the 16mm f1.4, the 30mm f1.4 and the 56mm f1.4. The fourth lens is a "convenience" lens and it's the 18-50mm f2.8. When I pack for a vacation I'm planning to take the two bodies and the three primes. All the prime lenses are quite fast and all are optically very, very good. Lately I've had very good luck with all of the Contemporary Sigma lenses I've purchased, regardless of format.

I thought I could get by with the zoom for the wide end of the range but having all three primes with the same fast apertures is a keen draw. All the primes are relatively light. The 56mm is counter-intuitively the lightest and the smallest but all deliver very nice images. While I like the little zoom I like the three primes just a bit more. Since the system is for fun and self-directed creative work I don't need or want to add a flash to the system. I'd rather have grainier files or files that are a bit less perfectly sharp.

It seems comfortable to have the systems sorted by their strengths. Fewer decisions to make from mode to mode. The nice thing about the "work" and the "personal" systems is that all the lenses are also interchangeable between the cameras. I can add and subtract to or from each system as needed.

All of the images above and below were shot yesterday with the (fabulous) Panasonic G9 and the 42.5mm f1.2 lens. I tried to shoot everything around f2.0 but caved in when I felt I needed more depth of field. I used the D. Monochrome L profile and shot the photos as Jpegs. 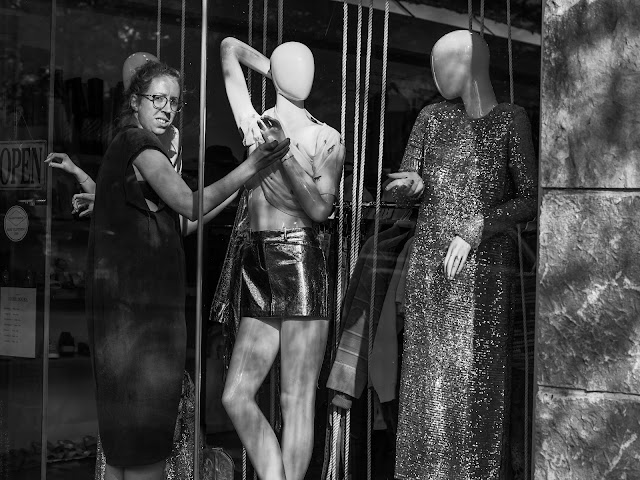 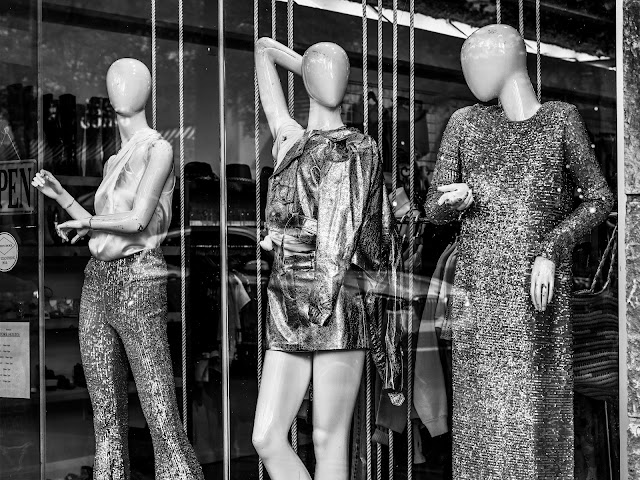 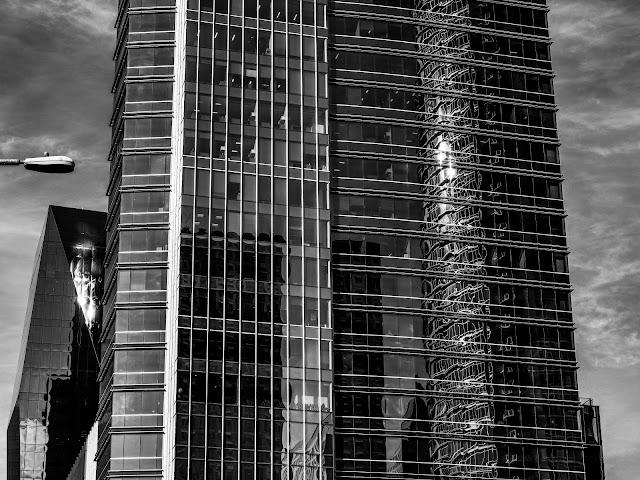 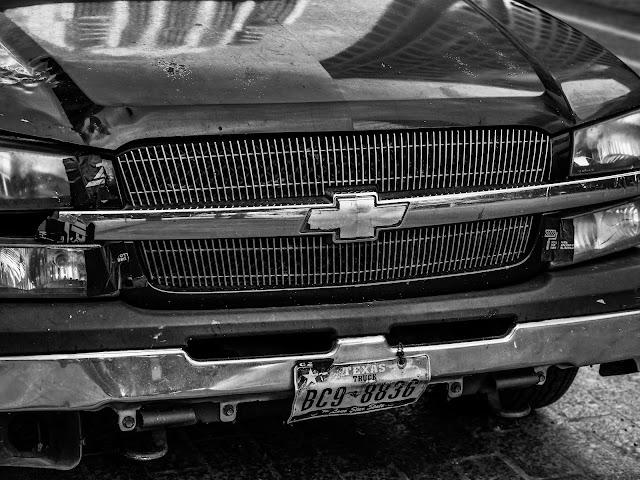 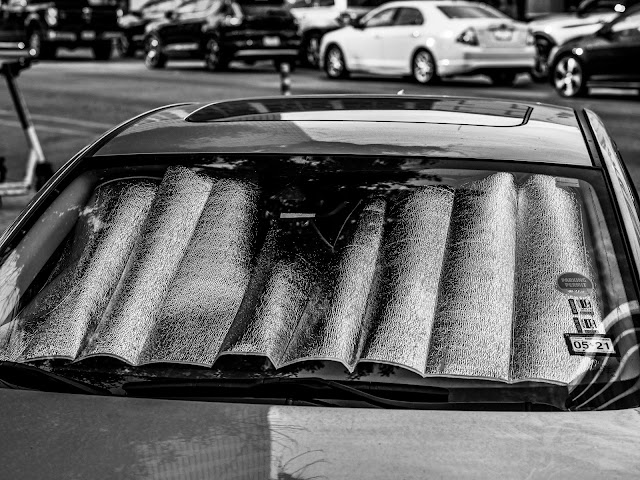 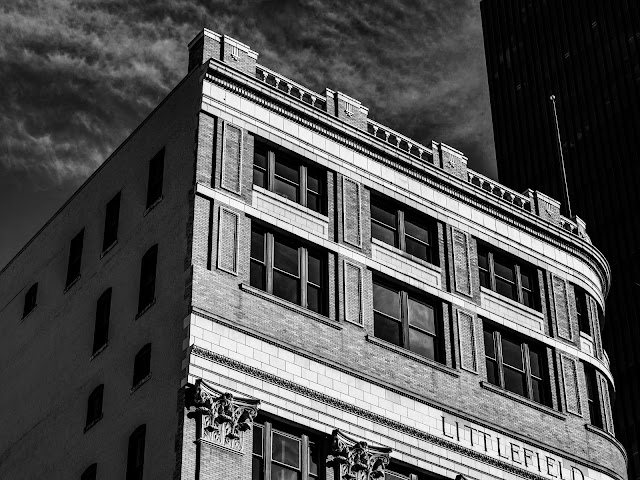 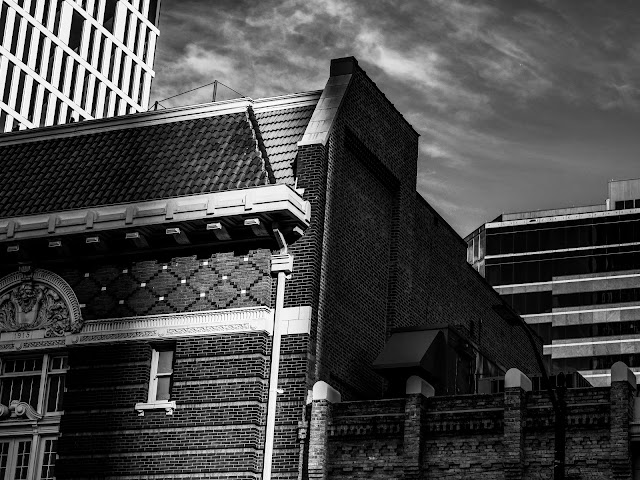 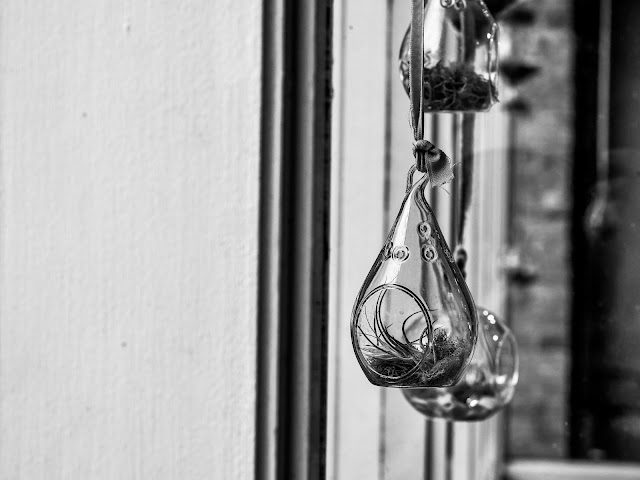 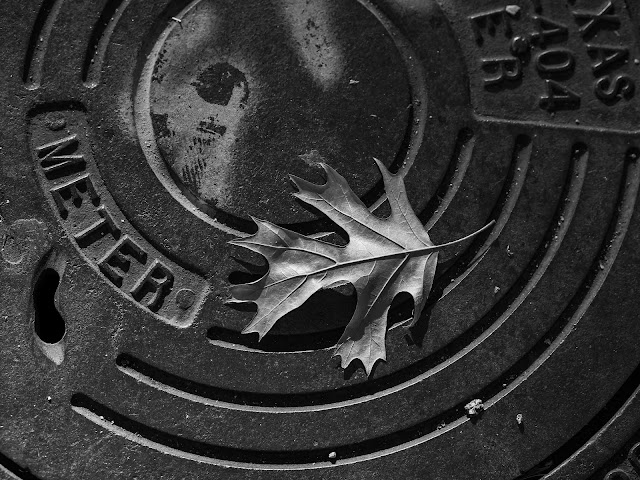 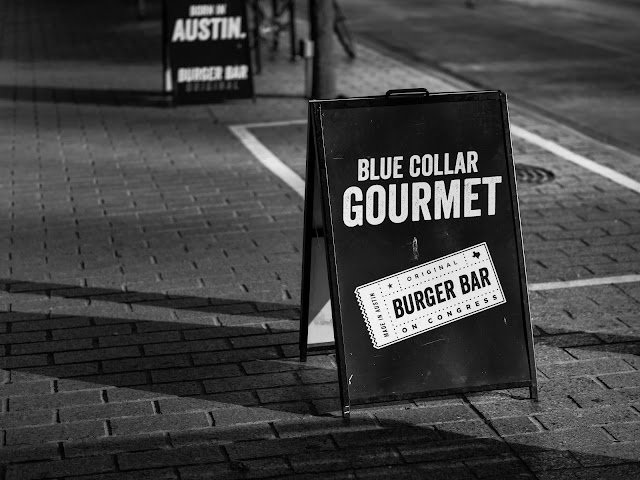 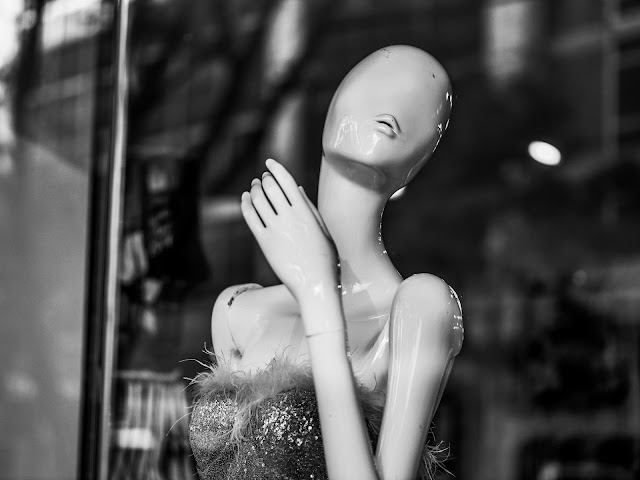 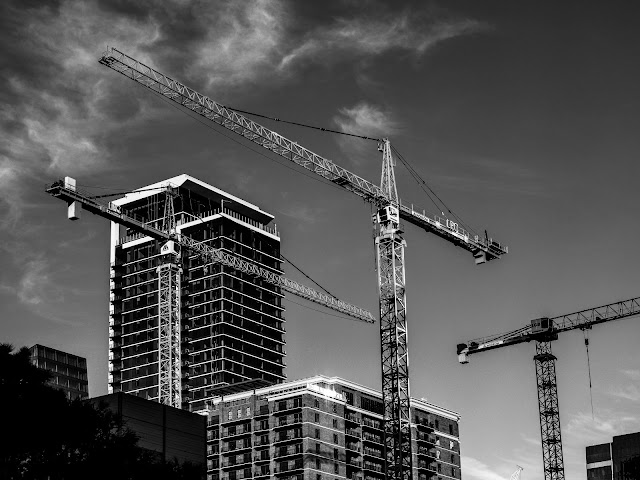 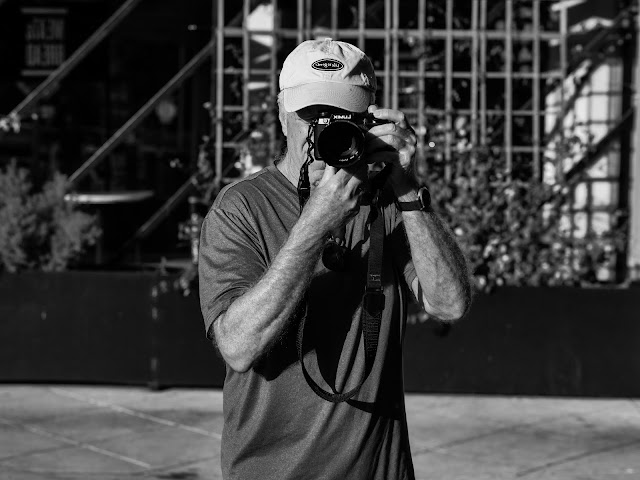 Found an old hat in the closet yesterday. Thought I'd wear it for a while.
Giving the bucket hats a rest until I head to Vancouver. I hear they are all
the rage in Canada.
Posted by Kirk, Photographer/Writer at 14:56 10 comments: